When Nathaniel Garcia’s fifth-grade teacher asks him in September what he did this summer, he might just answer her in Russian.

Fifth-grader Shaniya Purchas might use Chinese to describe her favorite activities for her teacher and friends.

STARTALK, a national initiative in summer language education affiliated with the National Foreign Language Center at the University of Maryland, is designed to get students to “start talking” and learning critical foreign languages.

Students like Garcia and Purchas are among 105 summer academy participants who are doing just that.

“I have always been interested in different languages, and it is important to be able to understand other people,” said Purchas about why she applied to the program.

“I know two languages, and I was excited to learn a third,” said Garcia. “I also wanted something to keep me busy this summer and to meet new people and have fun.”

Language learners have been having fun at the four-week summer program since the division was first awarded a STARTALK grant in 2009. Annual grant funding makes it possible to offer the program free of charge to students, and all rising fifth-graders enrolled in the division are eligible to apply. Participants are selected by lottery equally from three sections of the city.

Garcia, known in his Russian class as Nikolai, is among those taking the first elementary Russian lessons offered in the division’s program. Elementary Mandarin Chinese has been available since 2009, and advanced Mandarin Chinese is also offered to returning, rising sixth-grade participants.

“The earlier one starts, the better,” said Jennifer Carson, world languages coordinator for Virginia Beach City Public Schools. “World language instruction in elementary school is valuable because research has shown that young children are able to acquire a second language with ease and native-like pronunciation.”

No students were having difficulty in Chinese teacher Lili Chao’s class as they asked and answered each other’s questions in Chinese about what they like to eat and drink, their favorite colors, their families and other details about themselves. Chao got the group’s attention to provide a few clarifications, speaking only in Chinese. Students are immersed in the target language during the four hours of daily instruction to help improve their proficiency in the few weeks they have together.

When asked for their observations of the participants, Bhattari said, “It is great to see the students’ enthusiasm for the culture and language.”

“I’m impressed with how they learn so much in just four weeks,” added Dou, who also studies Chinese at the Tidewater Chinese School in Norfolk.

A second Chinese language class down the hall was on their feet practicing vocabulary words for colors, directions and zodiac animals. Teacher Jie Lian showed flashcards and students pronounced the animal’s name in unison before transforming themselves into the animal. In the charades-like activity, students hissed like snakes, then roared like dragons, and bleated like sheep – all while trying to contain their laughter. 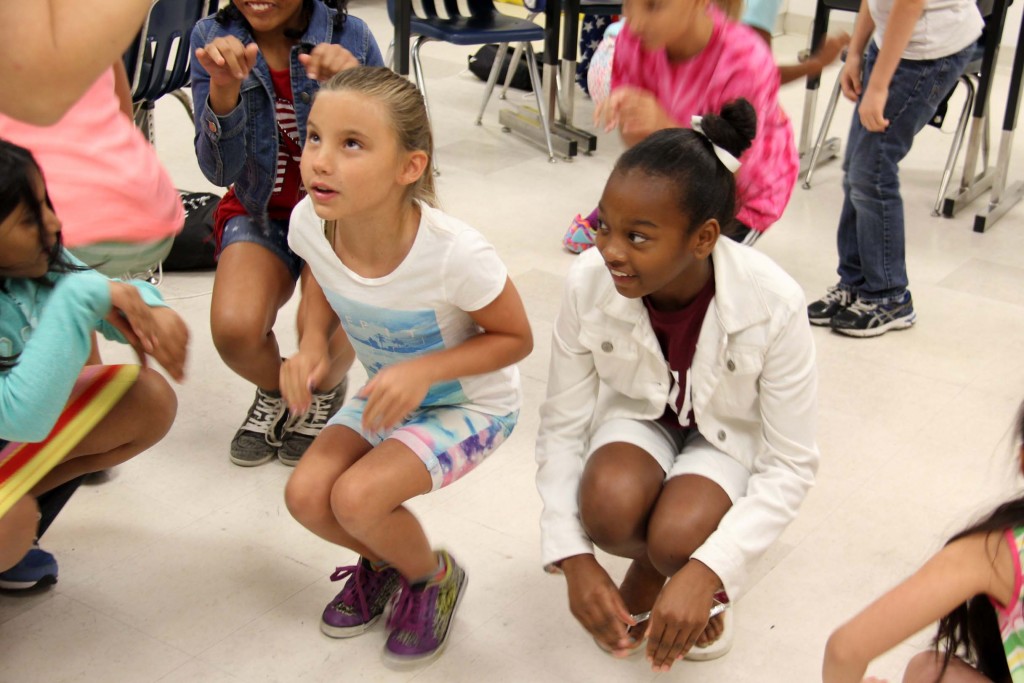 A competitive game of BINGO was being played in Lyudmyla Yuzhbabenko’s Russian classroom before she and her students departed for a field trip to learn how to make and cook Russian dumplings.

Carson noted that field trips and enrichment activities such as Chinese calligraphy and brush painting and Russian folkloric dance and art, provide students with hands-on activities as well as new cultural experiences.

Wearing aprons and rolling dough at a local Young Chefs Academy, Russian language learners followed their teacher’s step-by-step instructions, spoken only in Russian, to prepare dumplings and then enjoy their culinary creations. They responded, “Da,” to indicate to their teacher they understood and were following along.

“It’s been really fun, the activities we are doing,” said Garcia. “I am making new friends, and our teacher is really nice.”

Fifth-grader Devan Johnson, known as Natasha to her Russian classmates, explained that she wanted to learn Russian to be able to speak with her best friend at Hermitage Elementary School.

“My best friend was born and raised in Russia, and she encouraged me to learn Russian because she has a rule at home that she can’t speak English,” Johnson said. “I got really excited, because she challenged me not to speak any English at all in the fifth grade. I thought, ‘I’m going to take that challenge, and I’m going to do great on it.’ When I got into this program, I was really excited.”

Johnson noted the fun she’s having while learning. “We have learned a lot of funny things from watching videos and Russian television shows. You should see them. They are hilarious!”

Carson loves the enthusiasm from early language learners because she knows they will reap benefits beyond linguistic proficiency.

“Language study promotes success in school and improves cognitive function. As they process a new language, new pathways are created in their brains,” Carson said.

And as those new pathways quietly form, the students smile, laugh and practice speaking Russian over a plate of their homemade dumplings.