White Oaks Elementary fifth-grader Michael Jarvis says he likes science because “you can test different things and figure out quite a few interesting things.”  There is, however, one question he hasn’t figured out yet.

Wonder and awe were in full effect during the STEM-a-thon hosted at White Oaks Elementary Oct. 25. The peanut butter mystery may not have been solved for Jarvis but he and his fifth-grade peers had plenty of opportunities to investigate sound and light with activities aligned to their Standards of Learning (SOL) objectives. 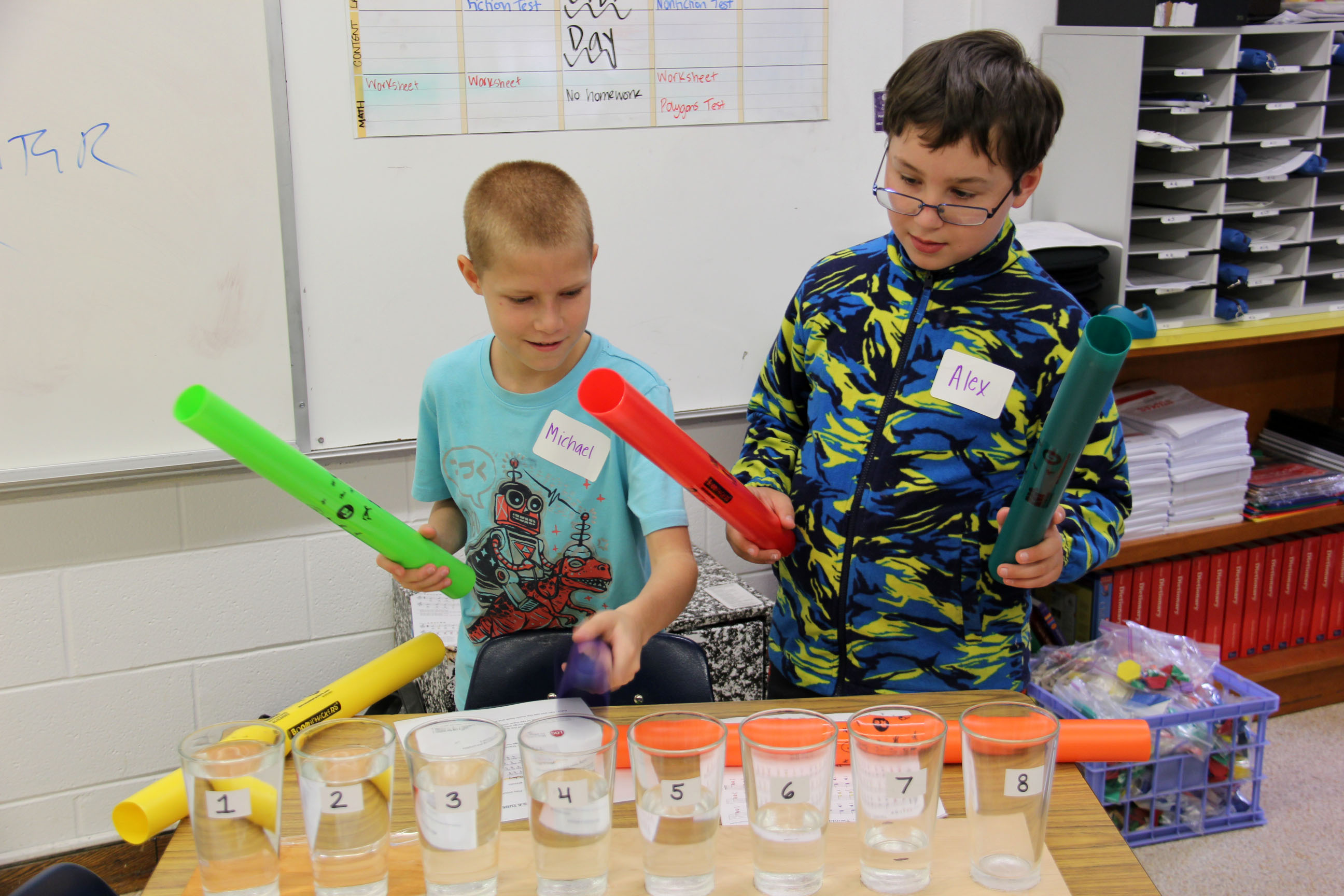 The focus of White Oaks Elementary fifth-graders during the STEM-a-thon’s opening session was on the plasma ball Kelley Clark brought with her from Williamsburg.

“Does anybody know what’s inside this?” she asked.

“It’s a ball with electricity,” said another.

“Does anyone know what’s going to happen when I touch it?” asked Clark. “Can I ask for a volunteer? Let’s see what happens.” 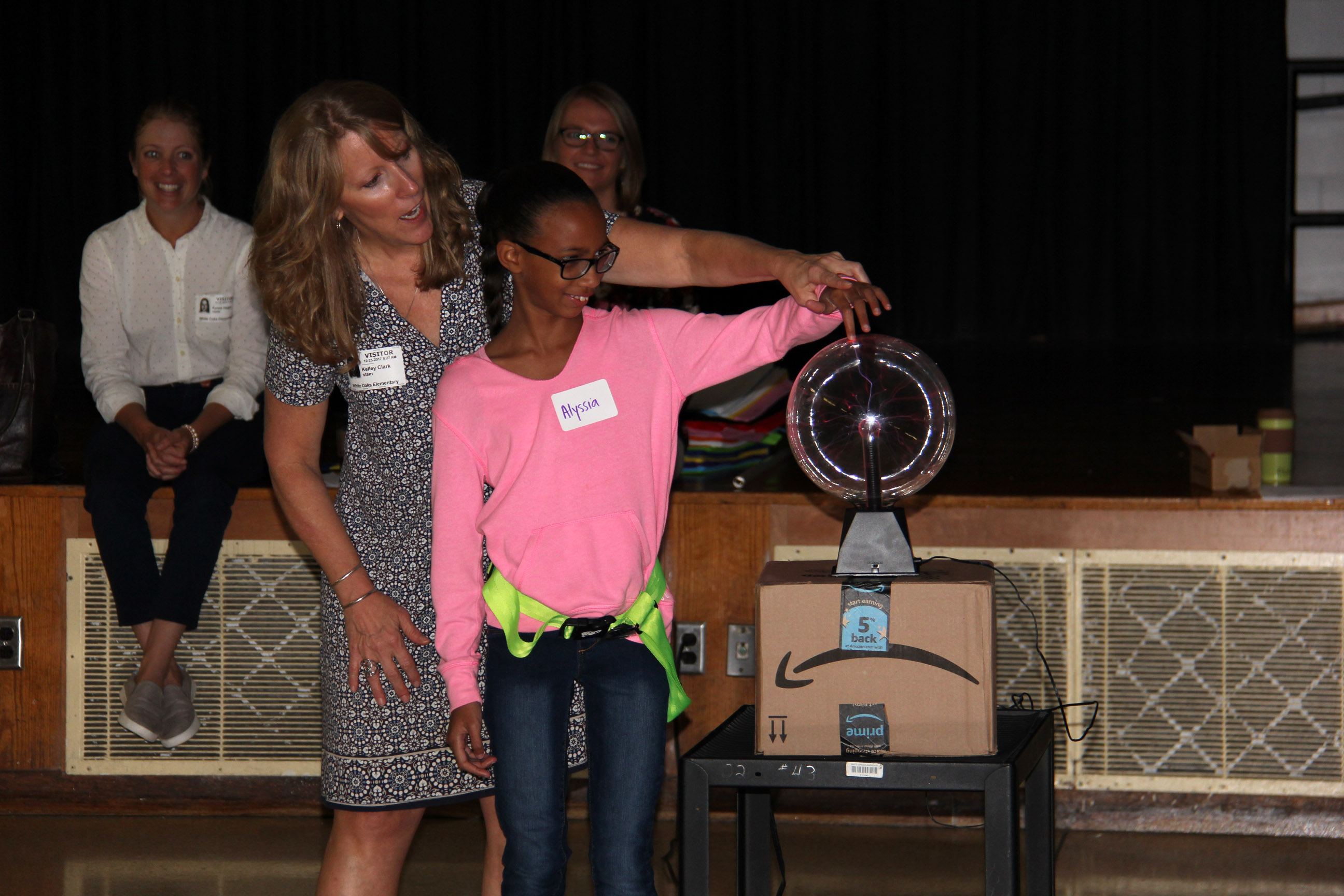 “The electricity, it’s all confused in there and all the molecules are bounding all over the place,” explained Clark. “But when Alyssia touches it, they are attracted to her and they are trying to get to the earth. They’re going through her arm and down to the earth.”

Clark is the coordinator for the STEM Education Alliance in the College of William and Mary’s School of Education, with which VBCPS contracts to lead STEM initiatives associated with the grant. They will visit the grant’s secondary schools in the spring with STEM activities related to their SOL objectives.

Clark continued to amaze students with the plasma ball, using thin tubes filled with different elements that would change colors. She saved the best – and the biggest – for last.

After a few Star Wars-like flourishes, Clark clarified, “It’s a fluorescent lightbulb, like what you have in your classroom lights.” 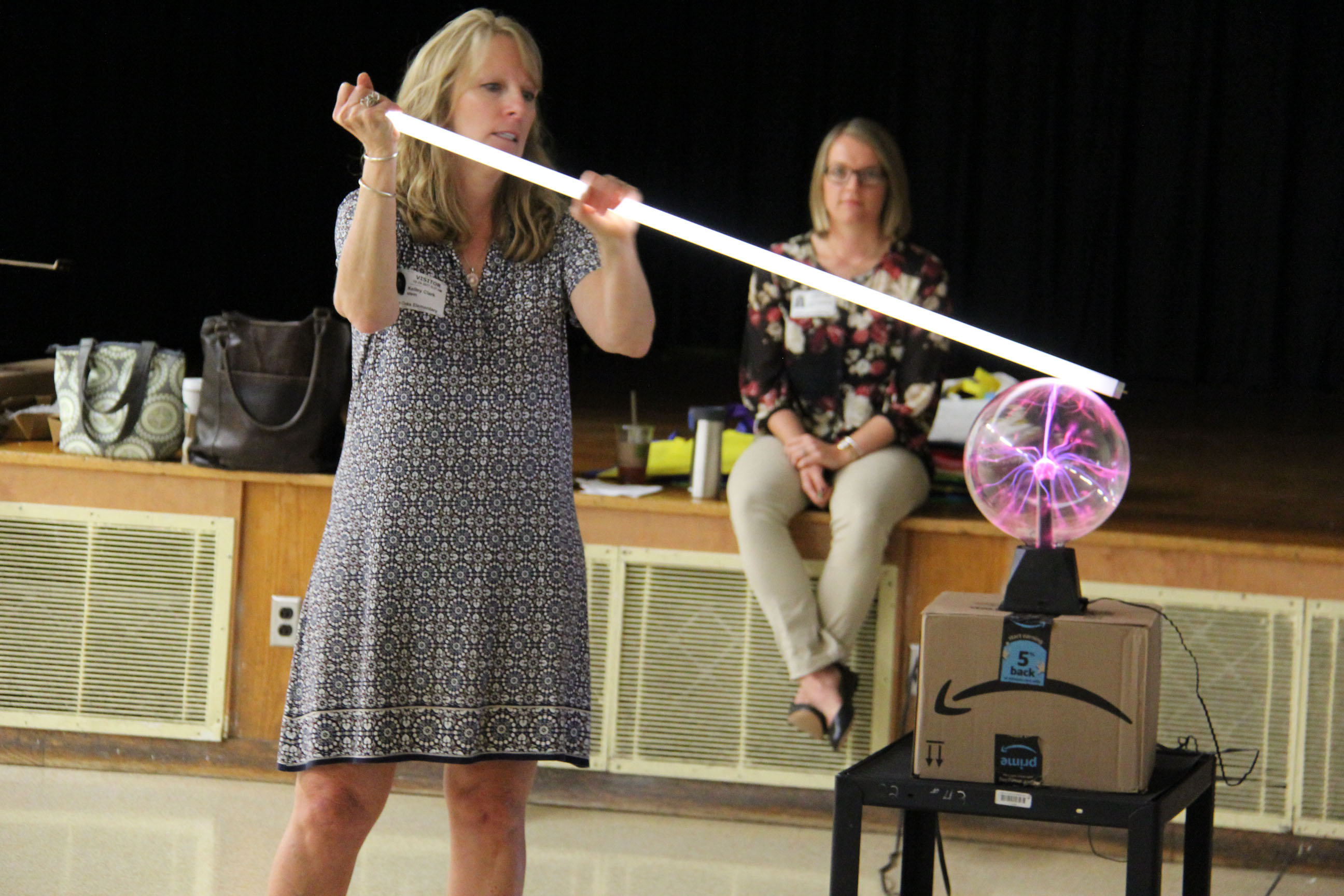 Students soon became the scientists, rotating through four classrooms for one-hour investigations on various topics related to sound and light. During their break for lunch, they spoke with scientists and engineers visiting from Naval Air Station (NAS) Oceana Dam Neck.

In the room focused on the characteristics and properties of light, students learned about and experimented with refraction. 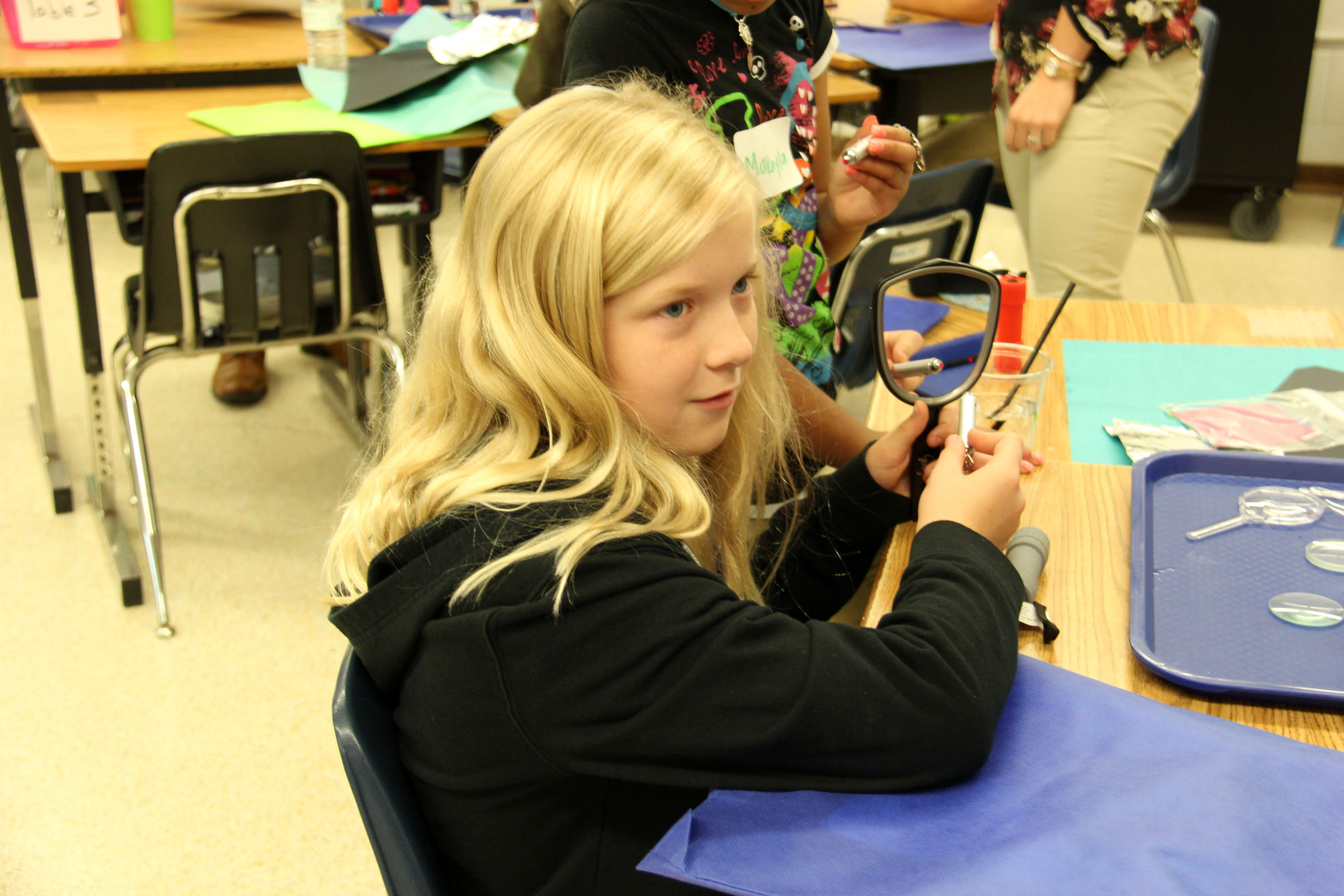 “I really liked the tuning fork station,” said one student. “It was really cool. I liked the way the vibrations could make things move.” 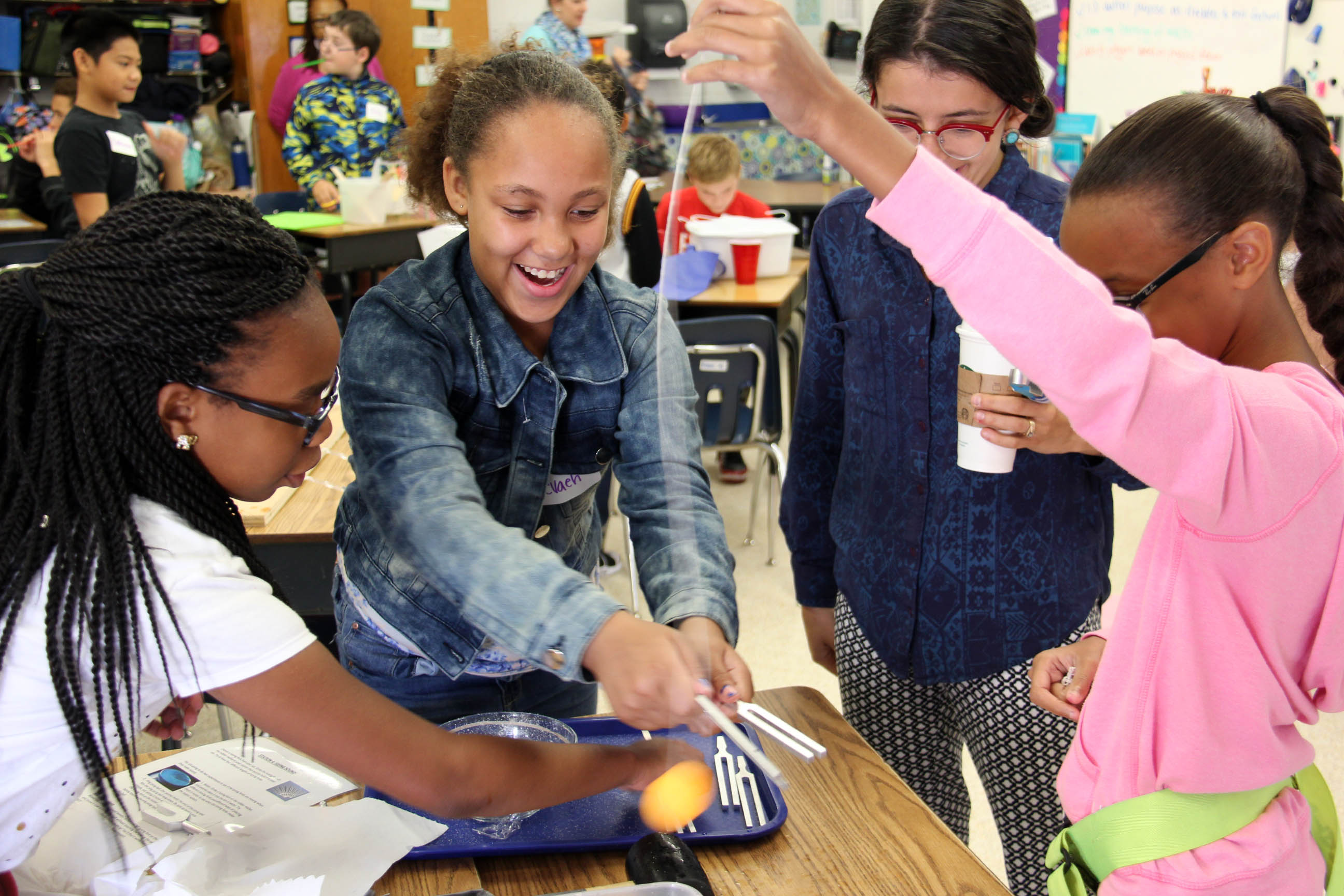 In the musical makerspace, fifth-graders Landon Bradshaw and Jason Hunt put to use the lessons they’ve learned this year learning how to play string instruments in the school orchestra. 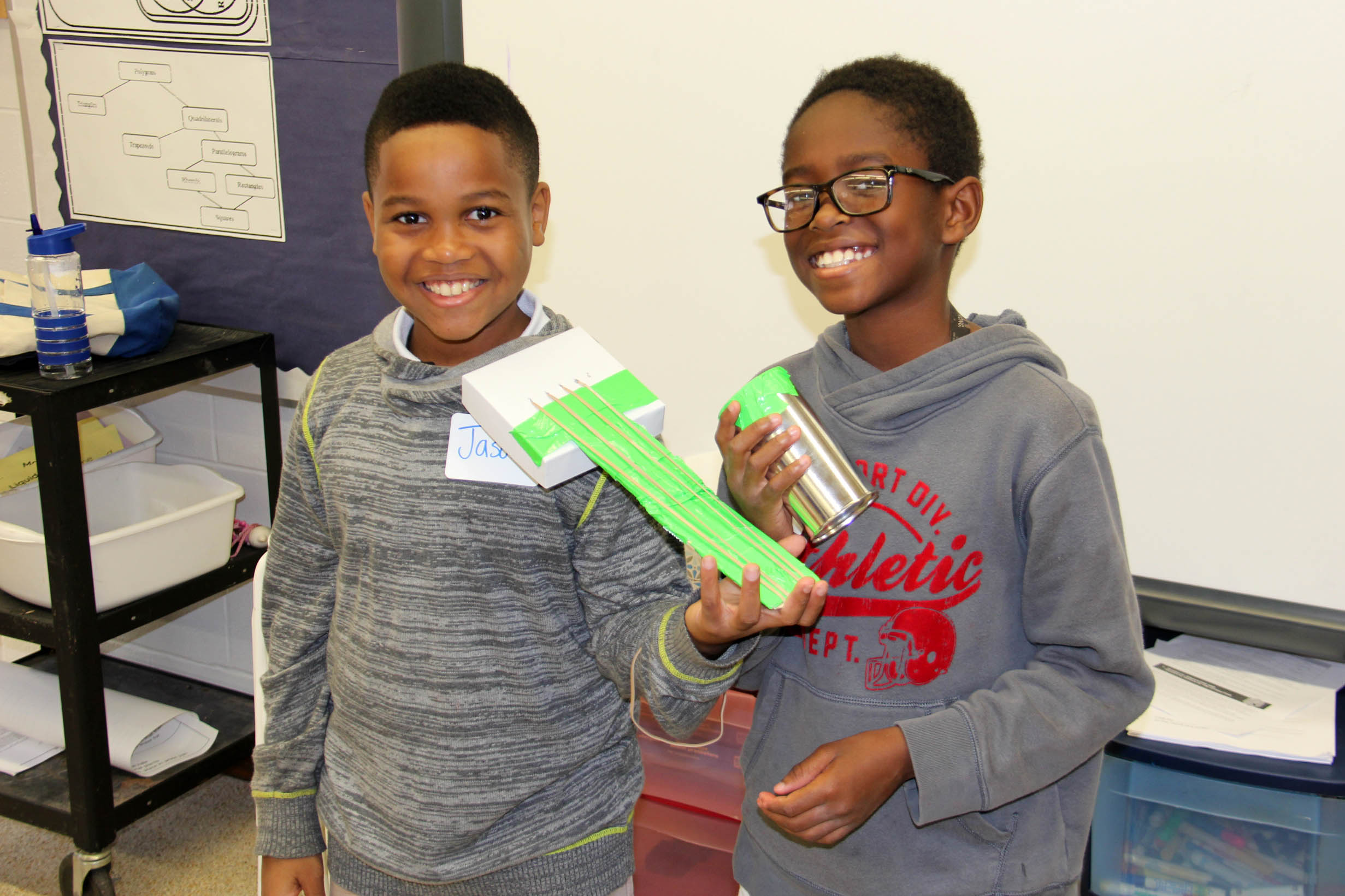 All smiles while working through the challenge, both fifth-graders agree their real string instruments will be easier to play.

“They’re already made for us!” said Hunt laughing.

Making working electronic circuits was the STEM project in the last classroom.

“What I like about this project is how you can see that it’s sound and also light, and there’s also many different experiments that you can do with all these tiny pieces that I never thought that you could actually do,” said fifth-grader La’Nya Burrow. 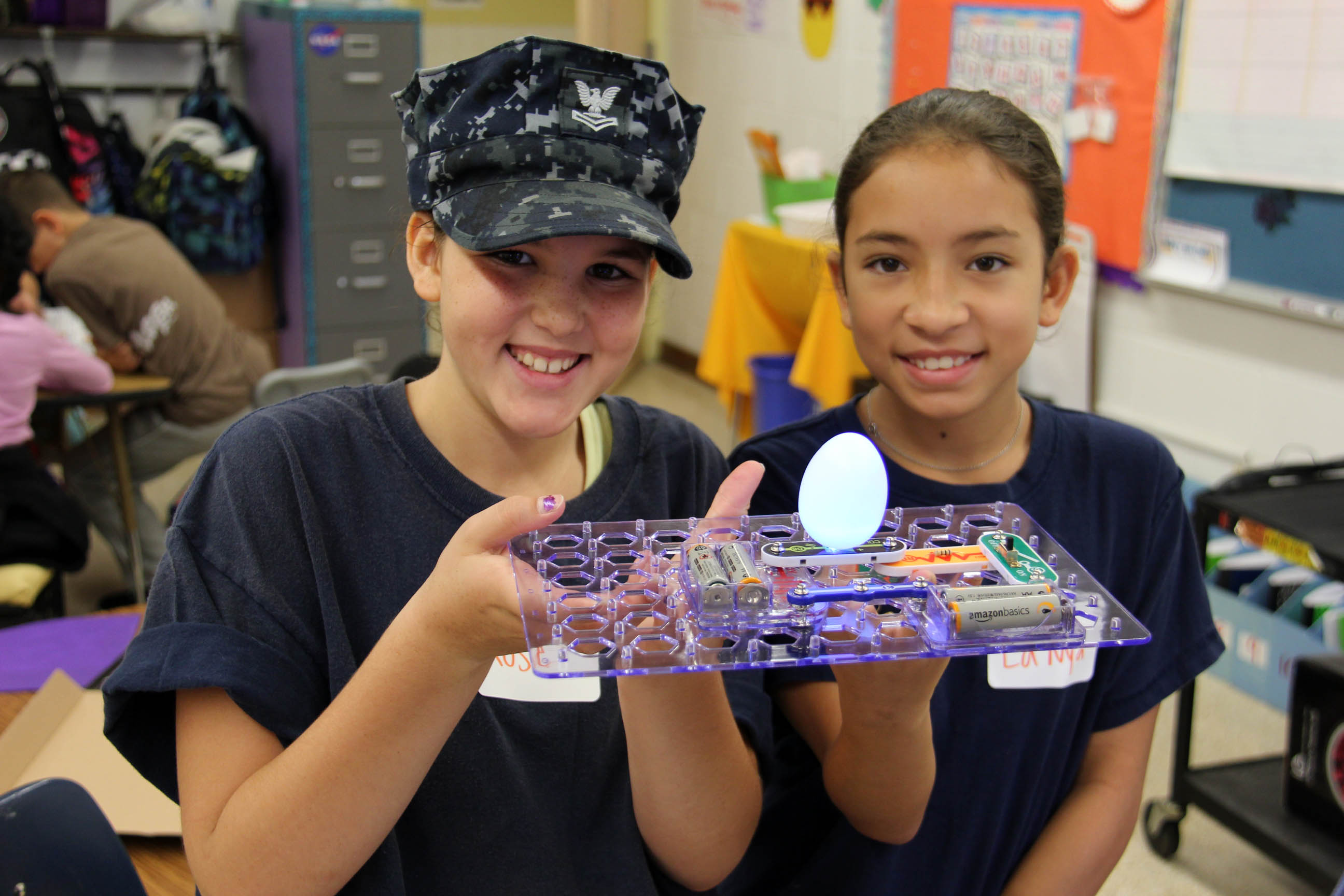 Emilee Hilliard, in the room with Burrow, also never thought her light-up tennis shoes would activate and change colors when she put her hand on the plasma ball, but that’s exactly what happened – to the amazement of her peers and teachers. They called over Clark from the room next door for an explanation but even she was stumped. 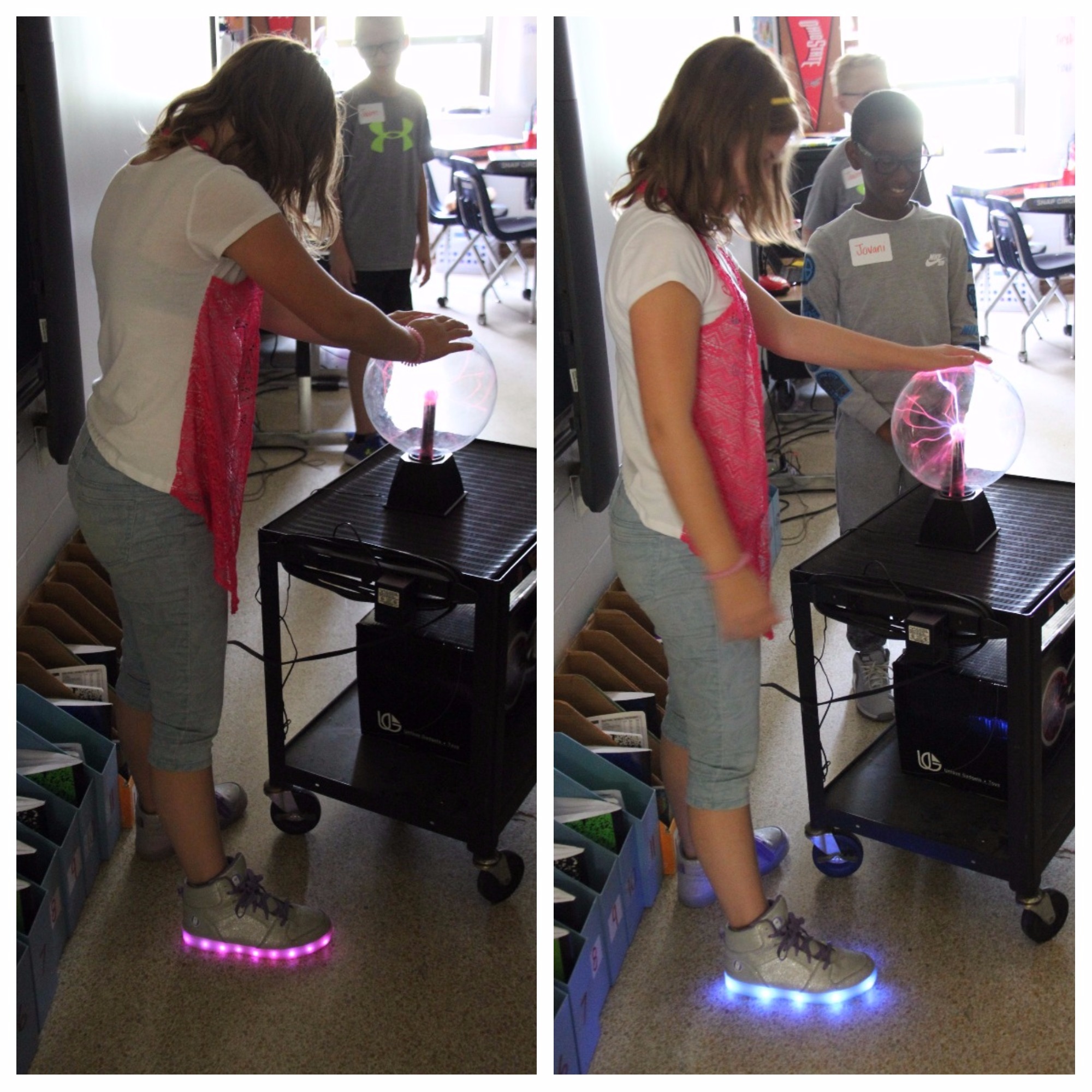 The inquiry. The wonder. The engagement. It’s just what Clark wanted to see happen.

“Our goal for the day is twofold,” she said. “First off, we want the kids to love science and see that it can be fun and engaging, and it’s OK to fail and it’s OK to make things, try things and all of that. We hope to expose them to some science concepts, but the main goal is that they just really love STEM and get to try things they don’t normally get to try.”

The second goal is professional learning for the teachers who assist with activities throughout the STEM-a-thon. “We want them to see inquiry-based practices and we want the teachers to be focused on learning in the rooms,” said Clark.

She met with teachers before the STEM-a-thon to preview the various stations and followed up after the event to discuss various questions. How did you see inquiry being used in that classroom? Could you do that? What was different about that than the way you normally teach? What did you see that would make successful stations? What would make them difficult to use?

“I love this day,” said fifth-grade teacher Elizabeth Samuelson, a reaction echoed by her colleagues. “We do investigations that are similar to this but theirs are kind of taken to another level. It’s really cool to see what we do here and take it back to our classrooms.”

The students think it’s cool too.

“They have so much fun!” observed Samuelson. “Anytime you get to have a hands-on experience, I think the students are so excited. And, in talking to them, they’re learning exactly what they’re supposed to learn and we don’t have to tell them. They’re learning it themselves. That’s my favorite part. I love anything inquiry-driven. It’s awesome.”

After every station, students kept track of their learning and notes in a handbook provided by the STEM Alliance. The teachers and students also get to keep all the materials brought in for the STEM-a-thon. 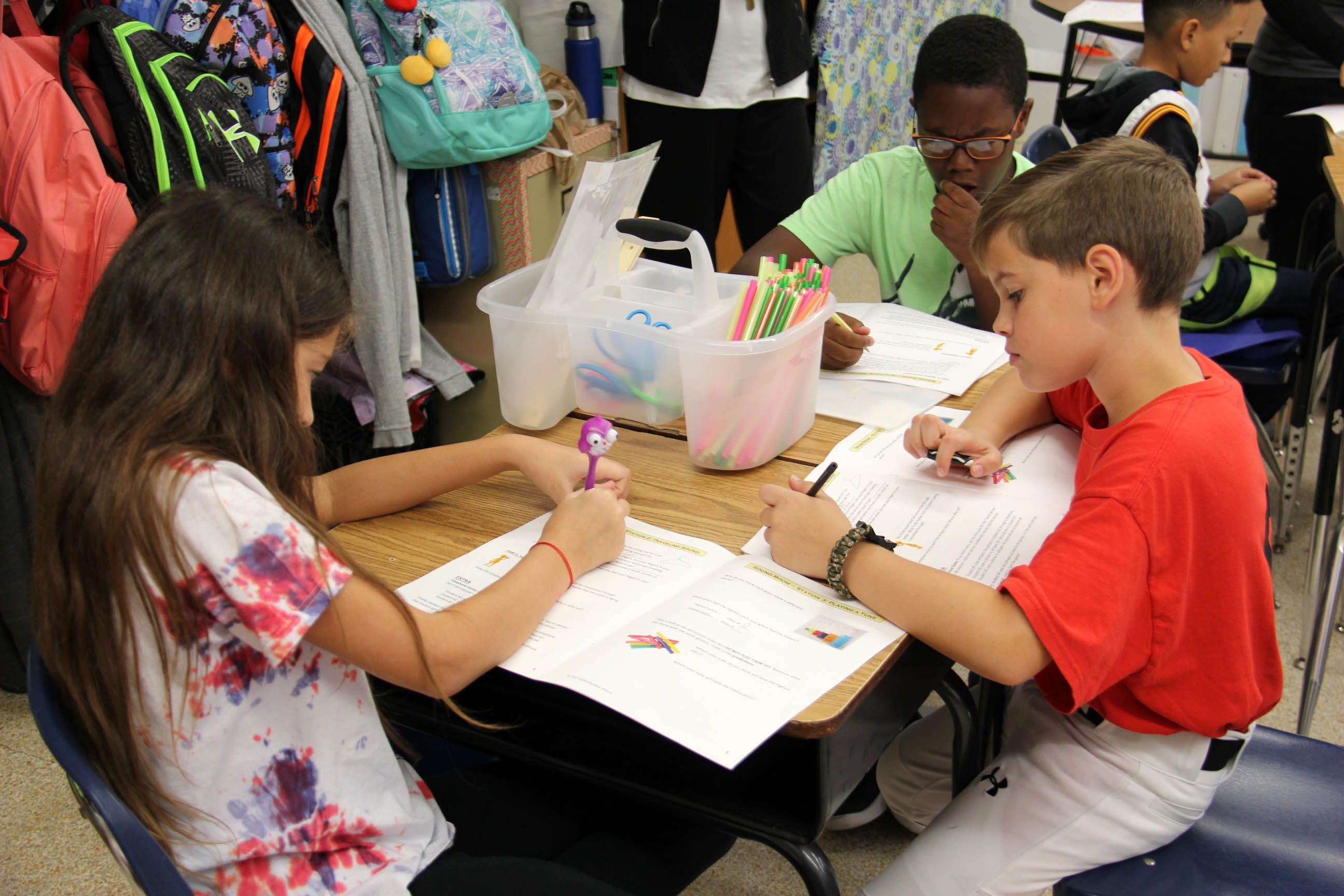 It’s just the beginning of science exploration for Jarvis, who said he may want to work at NASA when he is older.

“My mom says: Judging off all the Lego crafts you build and the ideas that you have, you’d be good in NASA and STEM and all that. I’m like, ‘Wow,’ because I don’t think my ideas are very good. Well, some of them are. But others think they are amazing!”