The March winds blew a bit early on the sunny afternoon of Feb. 25, as students from Rob Stover’s Telecommunications II class at the Advanced Technology Center (ATC) parked their souped-up Power Wheels into a row just inside an alcove of the building. A line of orange traffic cones stretched out a path on the southwest side of the building. These cars represented the finished products of problem-solving and practicing wiring skills. 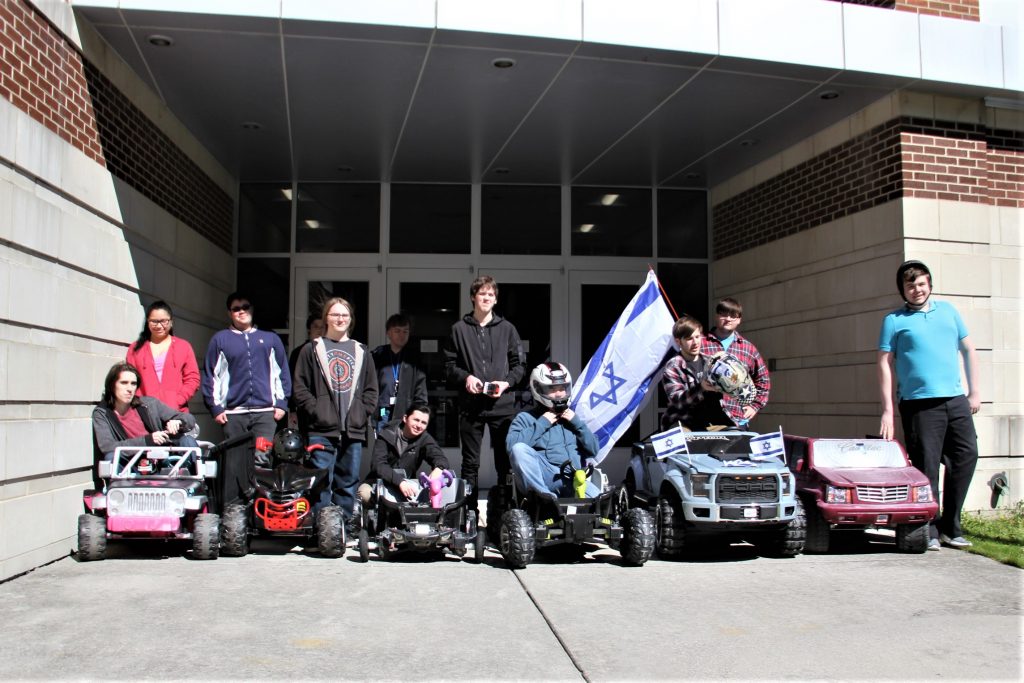 “We normally include a couple of weeks of low-voltage activity indoors with LEGOs, because the next big project involves DirectTV outdoors,” explained Stover. But instead, this year, he proposed a program he did at Ocean Lakes High School years ago, learning about wiring through fixing up the popular Fisher Price battery-operated riding toys. The ATC class said they would come up with the vehicles and, sure enough, said Stover, “They split up into groups and found cars through Nextdoor and Craigslist. Some got donated cars. One group bought a brand-new one.”

That particular group was made up of teammates Isaiah Burke, Zack Eason and Charles King. The new Power Wheels was a Ford Raptor, and it didn’t need much work, other than increasing the standard 12 volts to 36. During pretesting, it had already clocked in as the fastest of the cars.
“The voltage is the main thing,” Eason explained. “The more power going through it, the faster it is willing to move.” 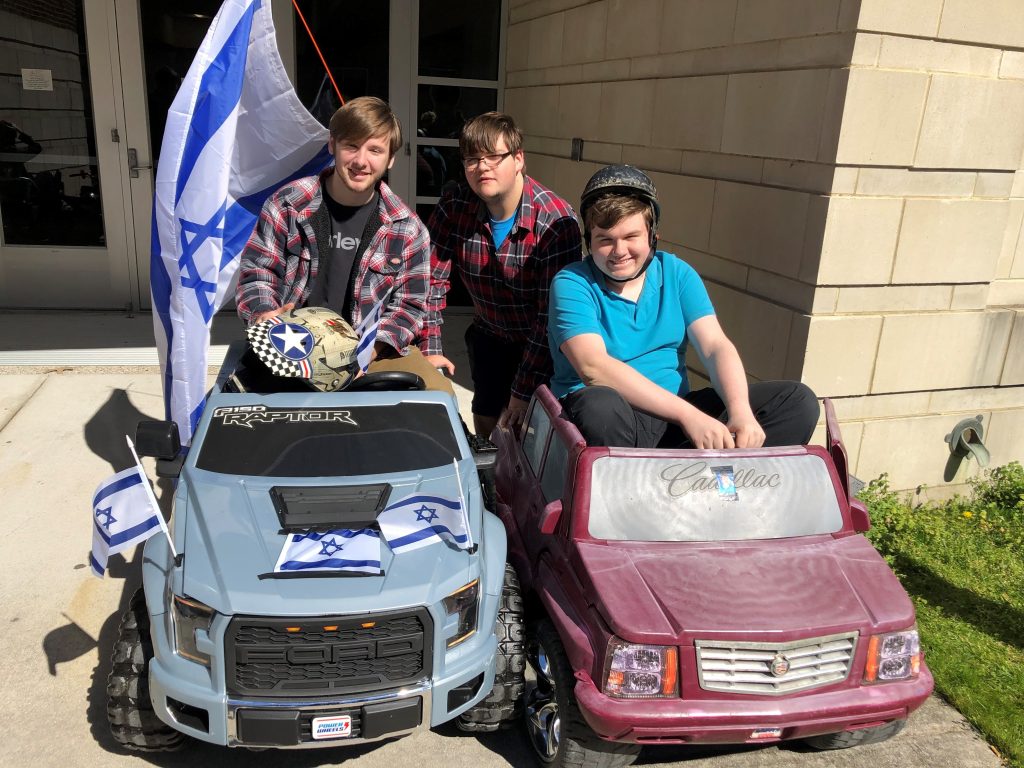 King jumped in with a further illustration of the concept. “You have to think of the battery as the engine. The bigger the battery, the faster it’s going to go. But you don’t want to go too fast, because then your motors and your wires are going to explode and you won’t go far enough.”
This team also took a donation, a Cadillac Escalade, from a TCC student. Burke said this vehicle, by contrast took a lot more effort to clean and make functional, including bumping the voltage up to 20. “I might get run off the road,” he predicted, “but I’m confident I’ll come in second or third.”

The general consensus among all participants, however, was that “The Sled” was going to be the one to beat. It was a Power Wheels that had seen better days, donated as a bunch of parts. Corey Letourneau was its driver. “We took the motors out of the car, took off the back tires, attached two razor scooters and wired them up to a switch. It’s definitely pretty fast.” 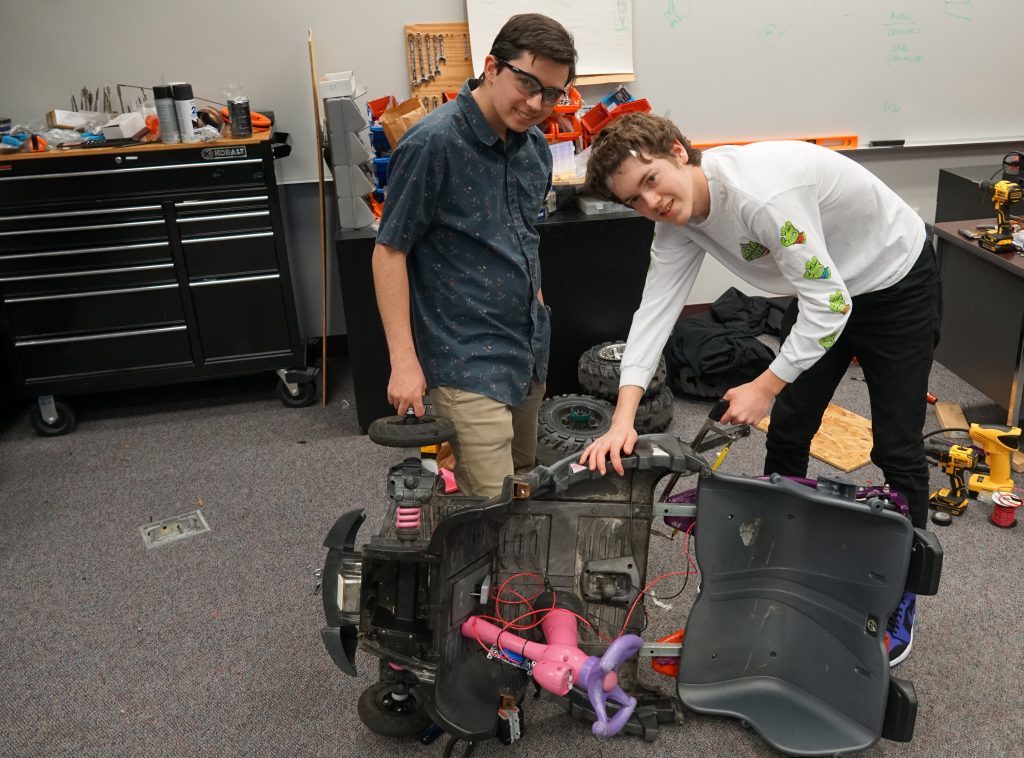 With the wave of a flag, the Power Wheels were off in a race that lasted less than a minute, with “The Sled” zooming to an easy win, and the Raptor left on the side of the road about halfway back as the other competitors sputtered to the finish line. Problems with the steering on the Raptor led Stover to suggest a rematch.

The outcome was not much different, however, with “The Sled” still crossing the finish line way ahead of the pack. “I was just a lot faster,” Letourneau confirmed. The Raptor finished second as Eason lamented that “the motor just started losing ‘oomph.'”

As for the Escalade, Burke found that weight was a factor. “I tried to use it as an advantage the second time around by pushing myself forward, shifting momentum forward.” He was content with his third place finish, but teammate King was less satisfied. “It was David and Goliath,” he said. “We were Goliath, and we kind of lost.”

Mr. Stover deemed the project a success. “The students really enjoyed it,” he said. “The videos we watched afterward and the postrace talk was very informative as they considered what changes they would make to wiring, voltage and gearing if they had to do it again.” A couple of the teams decided to keep their Power Wheels, while the rest of the vehicles will be donated for next year’s class.