When Mary Sutterluety prepared her Innovative Learning Grant application for the Virginia Beach Education Foundation (VBEF), she invoked a Chinese proverb to highlight the anticipated benefits of a project she titled “Green Screen Supreme.”

Her executive summary continued, “A portable green screen studio brings another level of technology, rigor, interest and engagement to student learning. The studio is an authentic and interesting way for students to evaluate, reflect and report on their work. Most importantly, students will become more involved in their products and presentations.”

And ever since Sutterluety and her colleague Diann Caviness were awarded a VBEF grant in November, Kempsville Middle School (KMS) students have been involved creating products and presenting their work using a green screen, studio lights, tablet tripod stand, wireless microphones as well as iMovie and Green Screen apps purchased through the grant underwritten by Damuth Trane and Kiwanis Club of Norfolk Foundation.

Most recently, the school’s diversity club produced videos for a project called “A Moment in African American History.” Students appear with green screen images of Jackie Robinson, Maya Angelou, Neil deGrasse Tyson, Oprah Winfrey, Colin Powell and others to highlight their accomplishments during the national month of recognition. The videos are being shown on the school’s morning announcements throughout February.

In his video, KMS eighth-grader Tairel Fuller spoke about Dr. Charles Drew, an African American surgeon who pioneered medical research in the 1930s to discover ways to process blood for transfusions and store in blood banks. 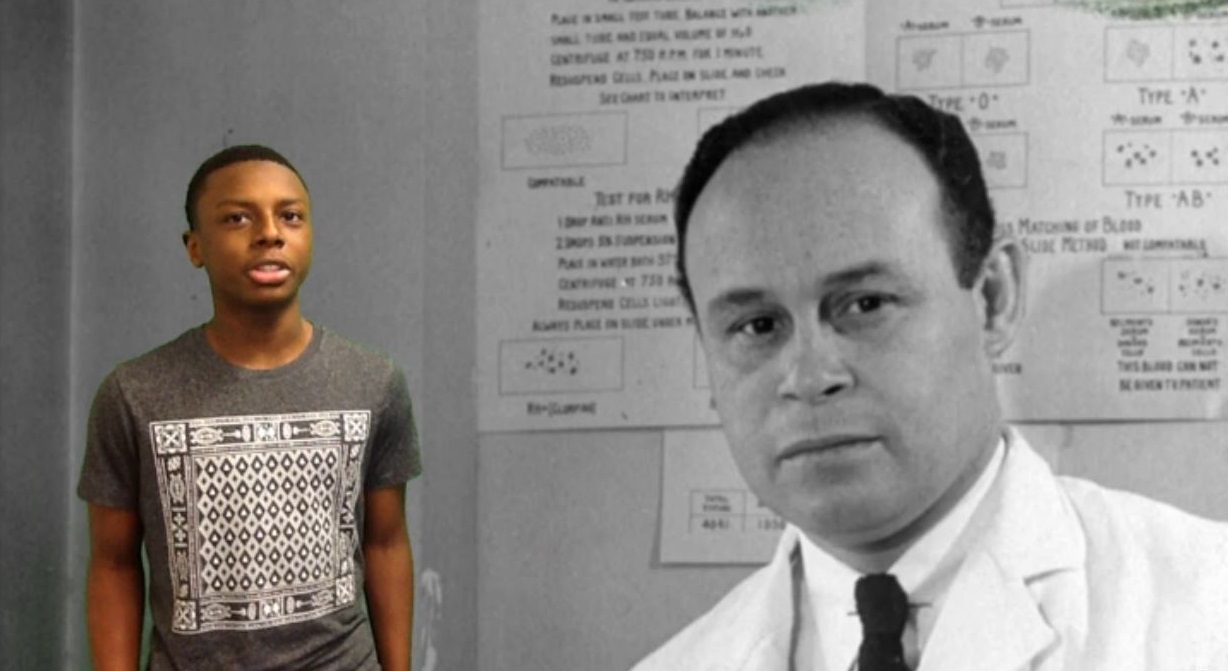 Fuller admitted to being nervous. “When I was doing it, I didn’t think it would turn out well, but I like using the green screen because it’s fun.”

Fun, but not without its challenges.

“If you were standing in front of the person’s face, you had to move to the side so you wouldn’t block the picture,” added Fuller.

Eighth-grader Lauren Sutton learned this lesson while producing a green screen video for Sutterluety’s English class for literature related to World War II. She worked with a team of classmates to write, anchor, direct, film and edit a 60-second history tutorial about Meip Geis, who hid Anne Frank and her family during the war. Throughout the team’s video, available on School Tube here, Sutton had to shift to the left, right and center according to the video’s eight changing images she could not see projected on the green screen while she was speaking. 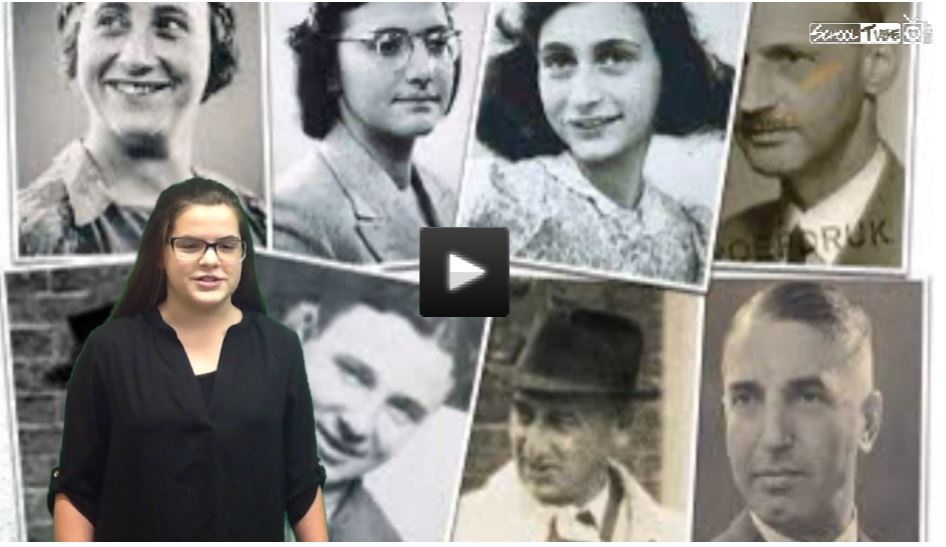 “I was standing in front of the screen and my partner was right here,” Sutton demonstrated with her hands to show how she faced her classmate off camera. “We were first laying down things in order, like one, two, three, but it didn’t work. So we probably did it like five million times before we got it. I just mirrored her, so every time she moved, I moved with her.”

The unique video production also allowed Sutterluety to experiment with instructional models as well. Having taught the eighth-grade unit on historical fiction for 10 years, which uses the play version of Diary of Anne Frank and Night by Holocaust survivor Elie Weisel, Sutterluety was well aware of the historical topics with which students typically struggled.

“I knew what topics they would have trouble with, so I made them research those to present [in advance],” explained Sutterluety. “They produced videos and then their homework was to watch one, two, three different student videos based on what they were going to read for the coming block. They would come into class knowing about the information they had trouble with before, and we dove right into the literature.”

In addition to the instructional benefits, students are more attuned to green screen technology when watching television and movies.

“I’ve noticed on the news with weather and on different shows when they are pretending to sky dive or something, they use different backgrounds,” said eighth-grader Kathy Ramos who highlighted Maya Angelou in her African American History Month video.

Seventh-grader Cameryn Orr advised, “You have to make sure you don’t wear green so you don’t blend in [with the screen].”

She added, “It’s kind of weird how you’re standing there in front of something green, and you look at [the video] and it’s something totally different.” 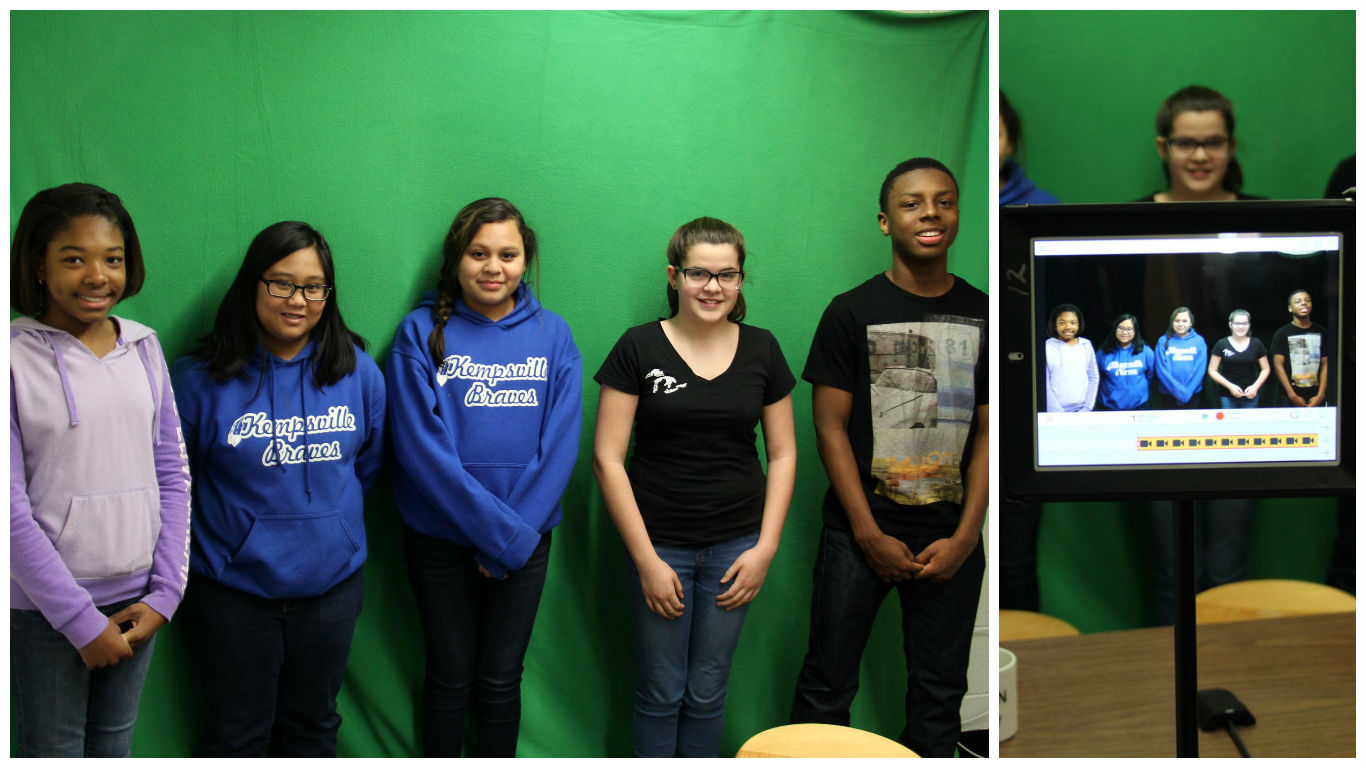 Sutterluety hopes more teachers can relate and will take advantage of the technology, noting Earth Science and PE/Health as examples.

“I think it’s applicable to many different classrooms,” she said. “Virtual field trips and students designing their own interests me. [They can] travel back to a time of mass extinction and include movie clips and images in the background about that moment. I could see it being used in PE and Health, showing kids how to play basketball or other basic things, but the idea is students producing their own projects and not [strictly] using PowerPoint.”

Sutterluety admits she is not a fan of PowerPoint presentation software and is excited to explore new opportunities to use green screen technology in her new role as a library media specialist at KMS, a position she transitioned to in late fall. She points to a section of empty bookshelves in the library she hopes to remove and convert into a green screen production area.

It is an opportunity for which she is grateful.

“The Virginia Beach Education Foundation continuously makes sure that we’re able to do fun things, creative things and kind of hook the kids into learning using their authentic technology – not traditional media but their technology,” said Sutterluety.

“I can’t tell you how many teachers spend their own funds to do something cool in the classroom,” she added. “And it’s not that we get reimbursed by any means, but we want to make sure that our kids are always engaged in authentic education.”

“A lot of times, for me, it ends up being technology,” Sutterluety explained. “If we’re pushing ideas like that like BYOD [Bring Your Own Device], we should also be providing [technology] to the students who don’t have the means to use their own equipment at school so they’re not being robbed of those types of creative, innovative projects.”

To learn more about Virginia Beach Education Foundation (VBEF) grants and how individuals, community organizations and businesses are supporting teaching and learning through the VBEF, visit www.vbef.org or contact VBEF coordinator Debbie Griffey at debbie.griffey@vbschools.com. The 2015-16 VBEF grant projects and underwriters are featured in a booklet available online.