“I just got back from jail yesterday,” shared Bradley Hilliard with a small group of students.

“How much time did you do?” asked Virginia Beach Chief of Police Jim Cervera.

After a pause, Cervera broke into a broad smile and started laughing with everyone, including Ocean Lakes High School (OLHS) senior Hilliard, who quickly clarified he was at the jail for a school field trip and saw a court case in action as well. 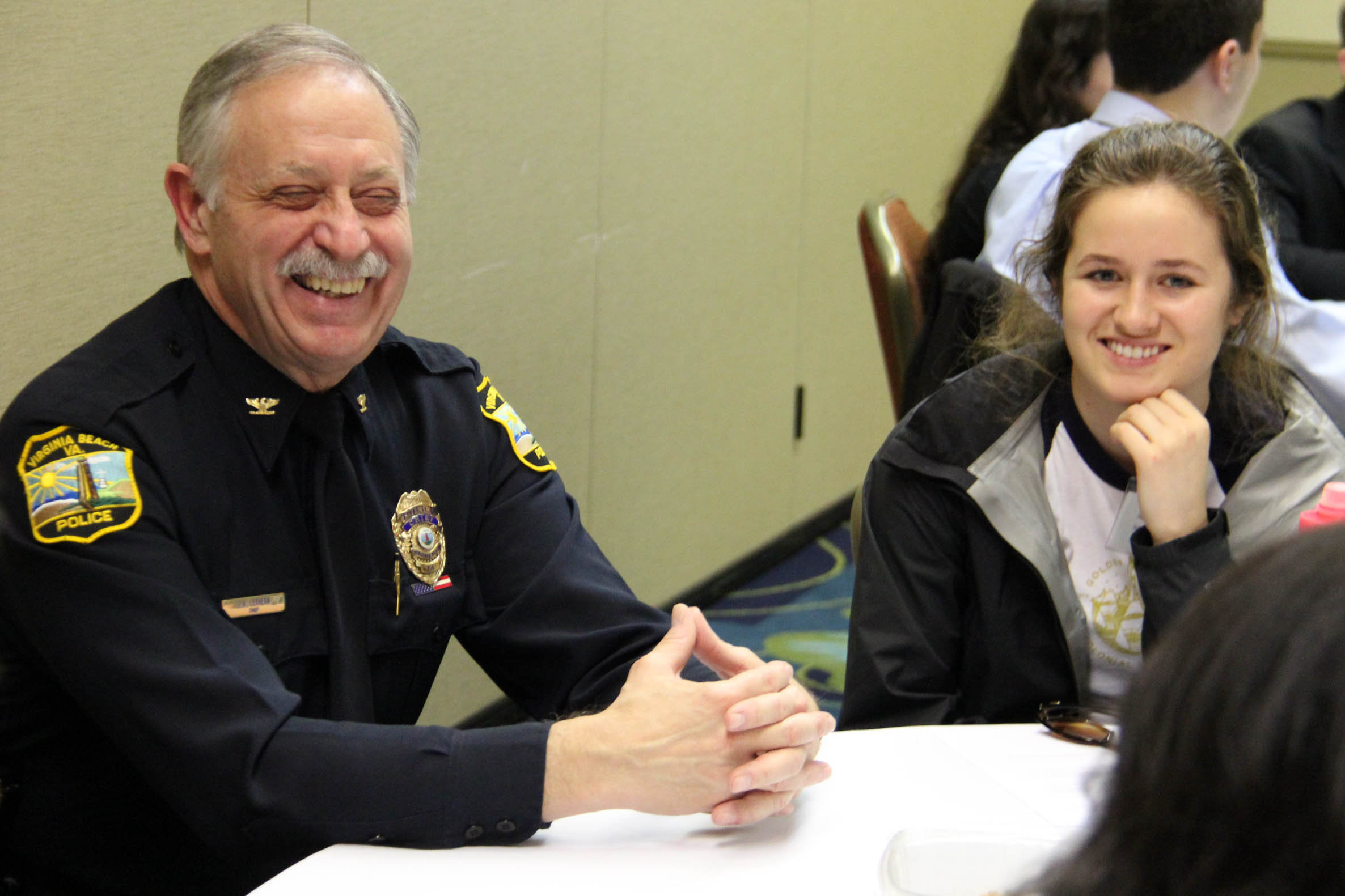 It was a welcome light moment amid a serious discussion about drug use, drug prevention, law enforcement and relations between local police and residents.

Cervera was one of three invited guests to a seminar series for 22 Brickell Scholars, which is a scholarship program sponsored by the Virginia Beach Rotary Club (VBRC).

“Virginia Beach Rotary Club is proud to sponsor the Brickell Scholars Program,” said Dan Edwards, who chairs the VBRC scholarship committee and is chairman of the School Board of the City of Virginia Beach.

“The club opted to establish the program upon Dr. Brickell’s retirement from VBCPS to honor his contributions to our schools. Providing an enrichment program for our top students was both appropriate and deeply appreciated by Dr. Brickell, who remained active in the program through last year,” Edwards said.

Edwards added it was his daughter raving about the seminars when she was a Brickell Scholar 18 years ago that led him to join the VBRC. “The seminars provide a great opportunity for our brightest and most active students to come together to discuss the hot issues and topics of the day they choose,” he said.

And that is what makes the scholarship program unique.

In addition to the VBRC awarding scholarship money to one Brickell Scholar in the spring of his/her senior year, all Brickell Scholars participate in a seminar series that connects them with leaders in education, business, government and other professional communities as well as with each other. 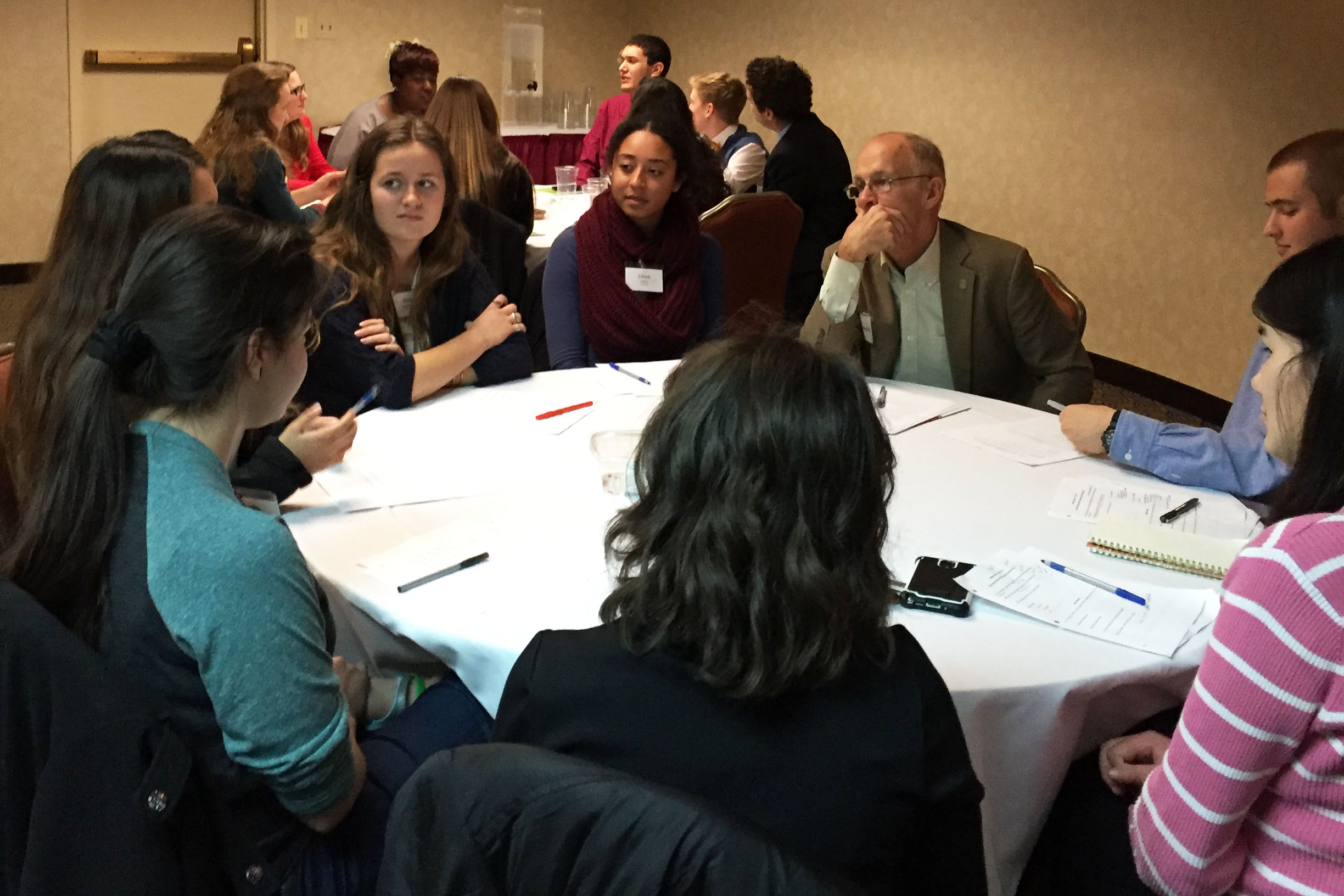 “You get to know people better from around the city who either have similar or dissimilar opinions, and you get to talk with new people all the time,” said Camryn Burley from Ocean Lakes High School.

“I particularly like hearing the diversity in opinion and background, especially in regards to school-related issues. We’re ultimately all so close geographically, but our schools each have developed different cultures,” said Cox High School’s Jack Muriano.

The differences often lead to deep discussion and debate, which many Brickell Scholars value.

“The seminars are thought-provoking in ways school sometimes doesn’t have the time to be because of state mandated testing or AP testing,” said Veridiana Silva from Salem High School.

“Our discussions are very elevated and thoughtful,” said Landstown High School’s Brian Chin. “Our collaborative ideas are much more meaningful than just a single person or anything else we experience in school.”

“I love meeting all the different people and hearing a lot of different perspectives about hot topics” said Princess Anne High School’s Renee Mitchell. “I’ve made several friends already and always look forward to reaping the benefits of diversity at every meeting.” 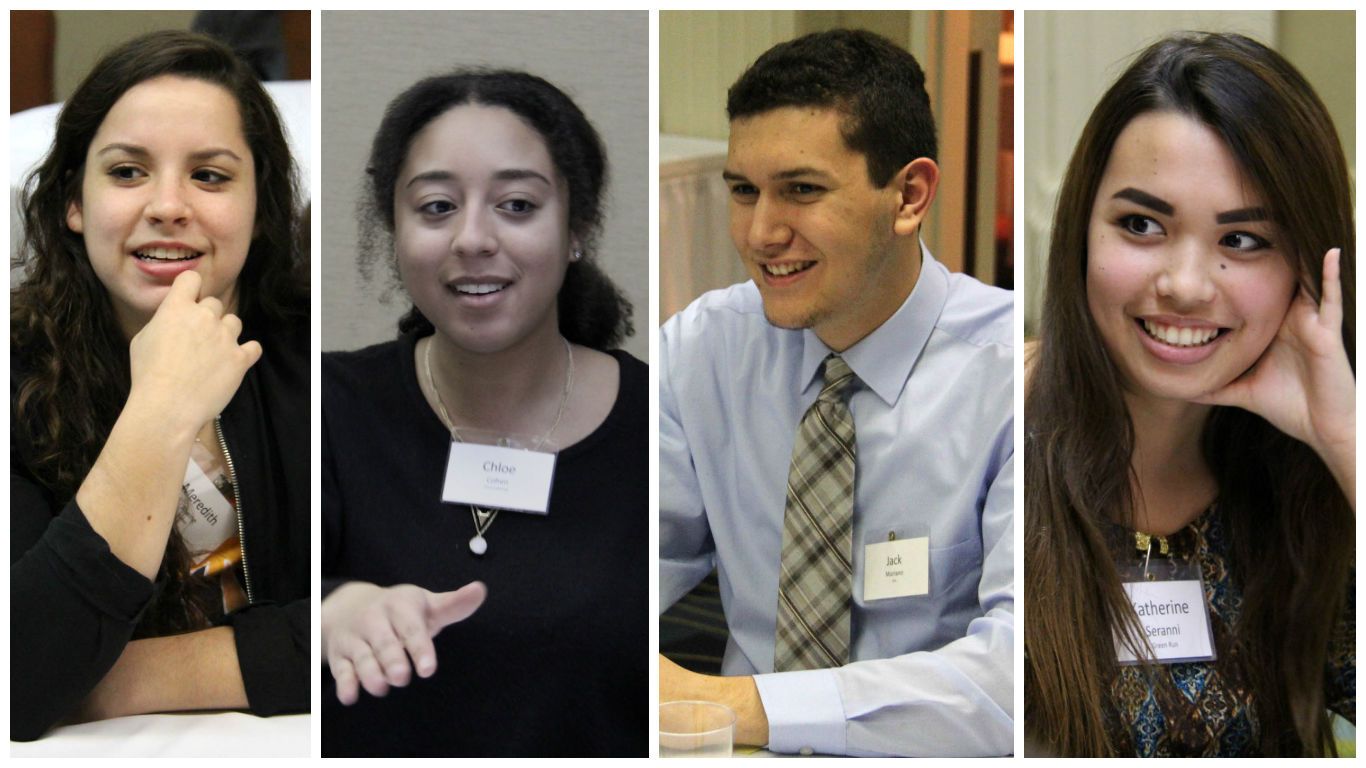 The “hot topics” discussed so far include various educational and societal issues.

The role of public education and whether it should be responsible for more than academics, such as the physical and mental health of children.

Challenges related to school funding and how to prioritize limited dollars.

Drug prevention, immigration law, refugees, income disparity and social mobility are other topics students selected. Issues related to medical ethics will be discussed at the third and final seminar in March.

The opportunity to deliberate with community leaders is a noted highlight for Brickell Scholars.

The chairman of the School Board.

The director of the Norfolk Field Office for U.S. Citizenship and Immigration Services.

A college professor of Business Management and Administration.

The Chief of Police.

“What I like about participating in the Brickell Scholars seminars is that there is always an expert in that field to facilitate the discussion,” said Chin. “We have a very reputable and knowledgeable person who is able to help us and talk to us about his/her experiences.

“I enjoyed the social issues discussion. We hear about all these occurrences on the news, but to have individuals with insider knowledge, so to speak, discuss these things with us was really enlightening and made me rethink the information I receive from any media source,” Silva said. 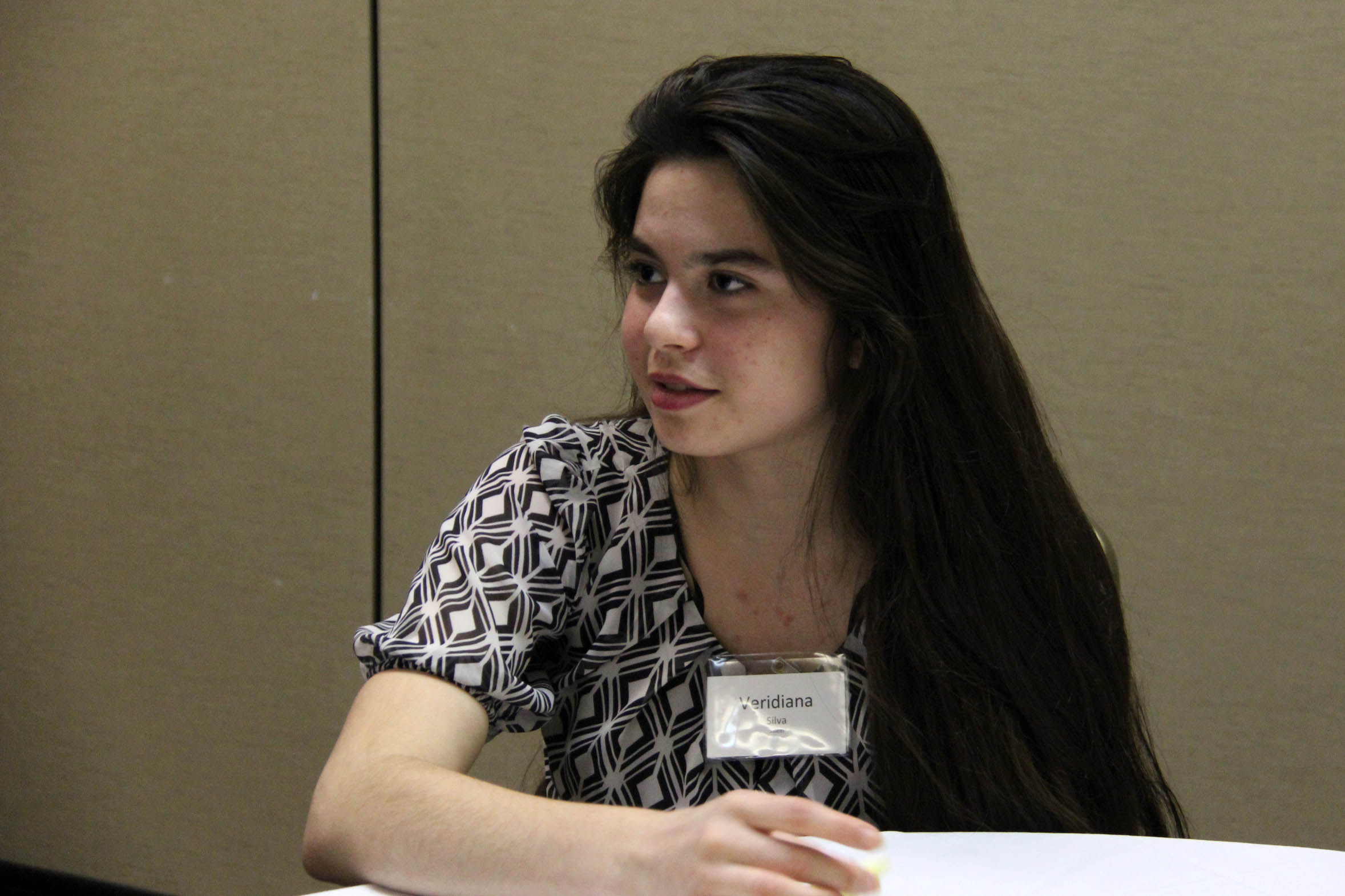 “It was really amazing to be able to give direct input into the system,” Muriano said. “All of them [have been] really interested in hearing what ideas we have as people in the system as to changes that could be made, and what they’ve done right.”

“The thing I like the most is feeling like my opinion matters. It isn’t every day that you actually get to talk to the sources and heads of organizations. They all seemed to really like our input on subjects,” said Landstown High School’s Abriel Armour.

“Honestly, I don’t understand why this isn’t a thing more often,” Armour added. “I’m just one of the thousands of students in the Virginia Beach City Public Schools system. If I have something to say, chances are my peers do as well. The young people of today are the future leaders of tomorrow. It only makes sense to ask us about our thoughts.”

The guest speakers think it makes sense, too, and they ask probing questions to get students thinking and talking.

Peter Shaw, professor of Business Administration and Management at Tidewater Community College discussed income inequality and social mobility. In discussing whether or not the cost of higher education is a barrier, Bayside High School’s Laura Bussiere noted that college isn’t the only avenue to a successful future.

“Everyone is pushing college,” said Bussiere, “but technical education leads to a great living. But no one talks about it. It’s like it’s frowned upon. I don’t know why it’s not being promoted and talked about more.”

Shaw affirms her thought by noting the shortage of qualified shipyard workers in the region and the high salaries of welders on nuclear subs.

After VBCPS chief financial officer Farrell Hanzaker challenged students to determine how to best allocate $10 million, students discussed the importance of higher compensation for teachers and supporting programs for students most at-risk.

“What do we do about people who are undocumented?” asked Frank Reffel, director of the Norfolk Field Office for U.S. Citizenship and Immigration Services. 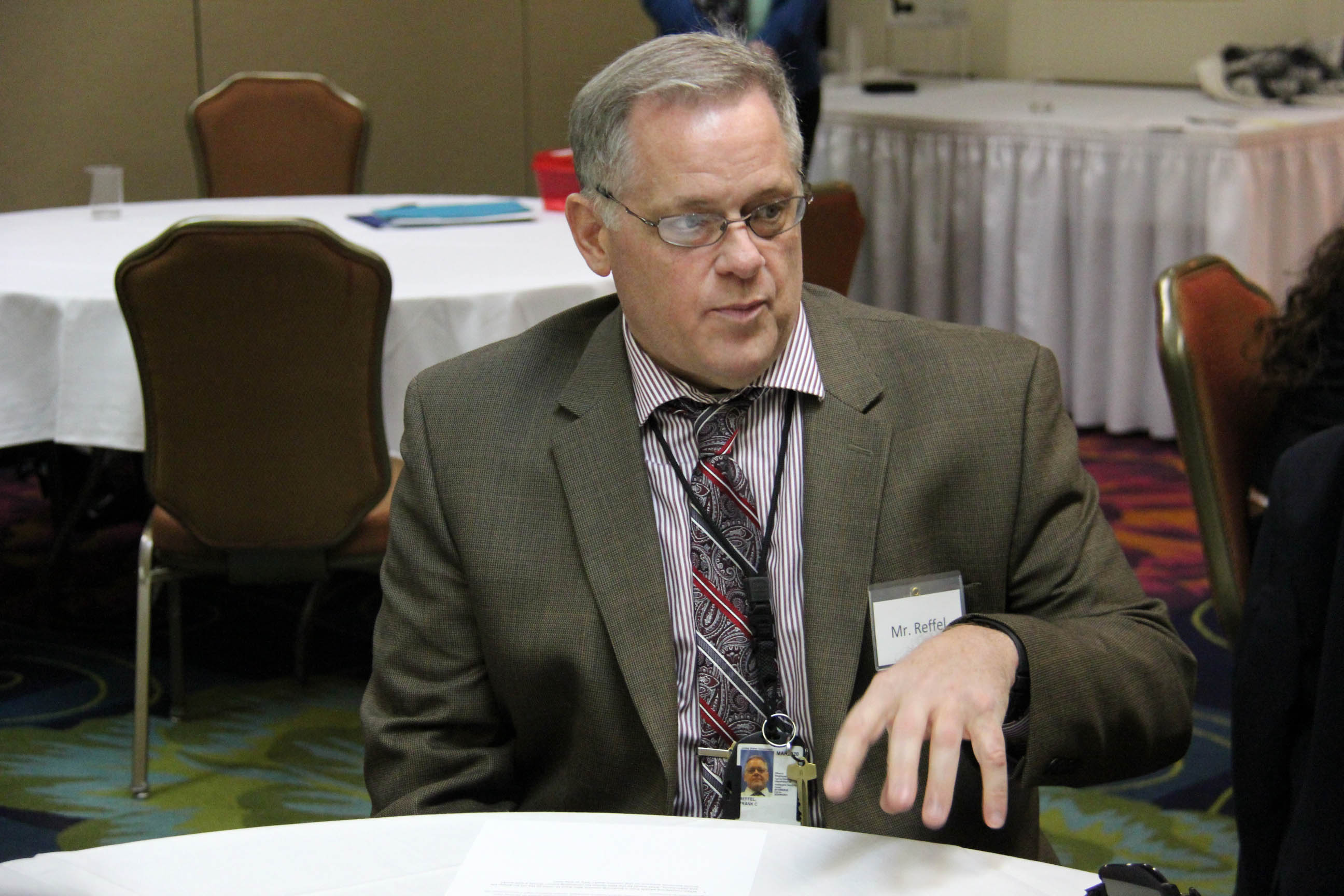 If presidential candidates are debating it on the campaign trail, why shouldn’t Brickell Scholars?

Reffel and the seniors discussed the difference between refugees and asylum seekers as well the total number of people displaced around the world. Students noted having relatives or friends who had been naturalized or were going through the naturalization process.

Observing and eavesdropping nearby with a smile is Barbara Kennedy, a coordinator in the VBCPS Office of Gifted Programs. Kennedy has been the school division’s liaison to the VBRC for the Brickell Scholars Program since 2008 and helps organize seminars and supports related events.

“This is a unique opportunity for students to grapple with topics they can’t get to in the regular curriculum,” said Kennedy. “They are really smart kids who have ideas to share, and it’s good to kick them around a bit with professionals. It’s also good for them to reach across school lines.”

Kennedy knew Brickell and enjoyed watching him interact with the students.

“He has been a facilitator in the past, joining us for a medical ethics session not too many years ago, and he has talked to the scholars about education in general. He really enjoyed meeting the kids, and he gave nice remarks at last year’s dinner,” she said.

As a man who dedicated his life to education – serving as a teacher, coach, principal, superintendent and college professor – Brickell would likely appreciate the observation of one scholar about their seminar discussions. 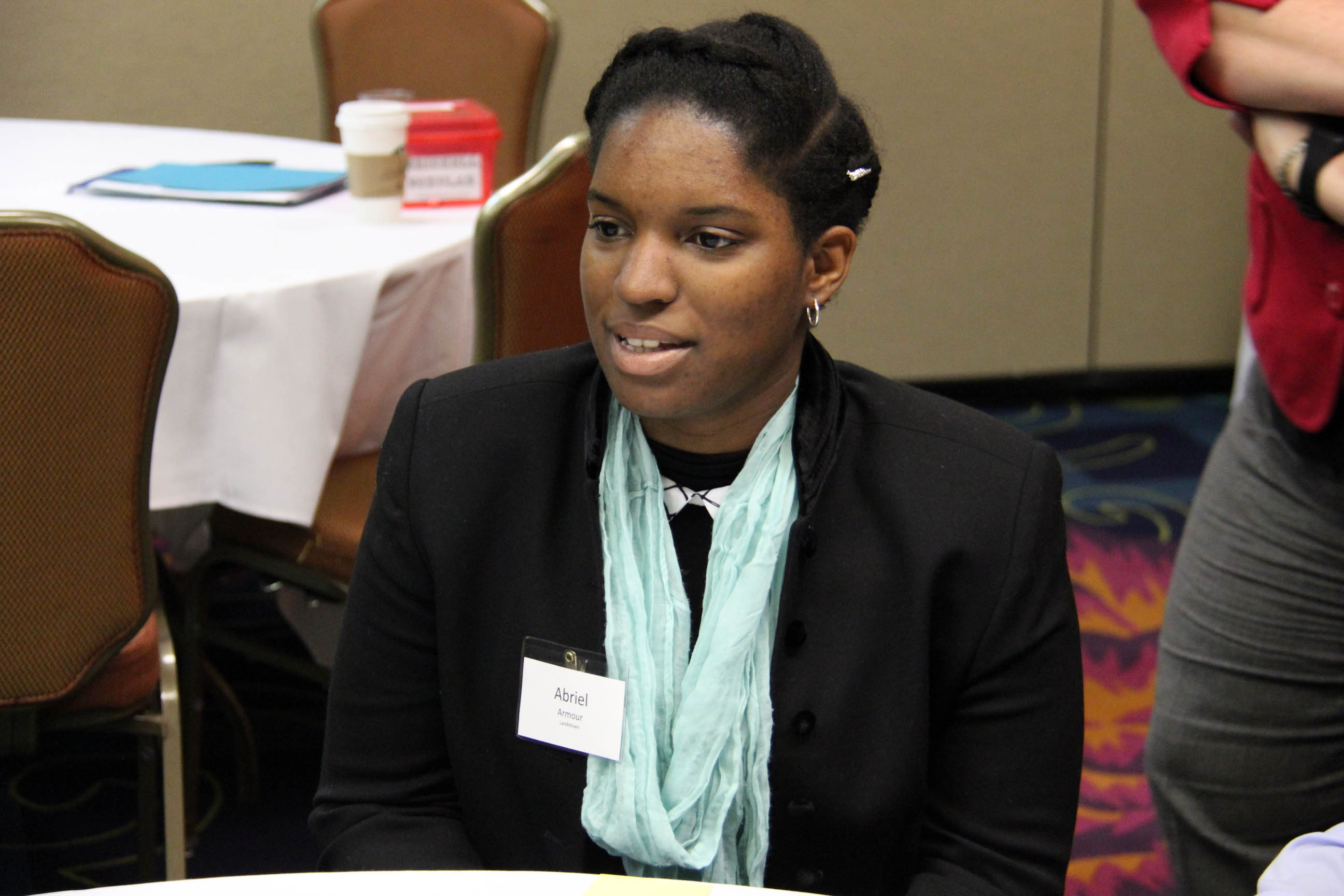 “I find that everything we talk about seems to find its way back to education,” said Armour. “It’s a subject that everyone can relate to and is clearly important to our society. As a student, learning is my life.”