Virginia Beach City Public Schools (VBCPS) was the only K-12 school division recognized as a 2018 Governor’s Award for Environmental Excellence honoree. These awards are presented annually by the Virginia Department of Environmental Quality (DEQ) to “recognize the significant contributions of environmental and conservation leaders.”

In addition, VBCPS was one of only 12 cities, agencies or universities statewide named a 2018 Virginia Environmental Excellence Program Sustainability Partner (VEEPSP), which is also administered by Virginia’s DEQ. This distinction is presented to organizations that are committed to “continual, measurable and verifiable conservation efforts, leading to direct and indirect improvements in energy usage, water usage, waste generation and other environmental benefits.”

For each of these awards, VBCPS was honored for not a singular program, but rather its divisionwide sustainability achievements which date back to 2005 with the construction of Hermitage Elementary School, Virginia’s first Leadership in Energy and Environmental Design (LEED) certified building.

Since that time, VBCPS has built or replaced seven LEED certified schools as well as the school division’s transportation building. Old Donation School is currently in the certification process and the John B. Dey Elementary School modernization would bring the division’s LEED buildings to 10. 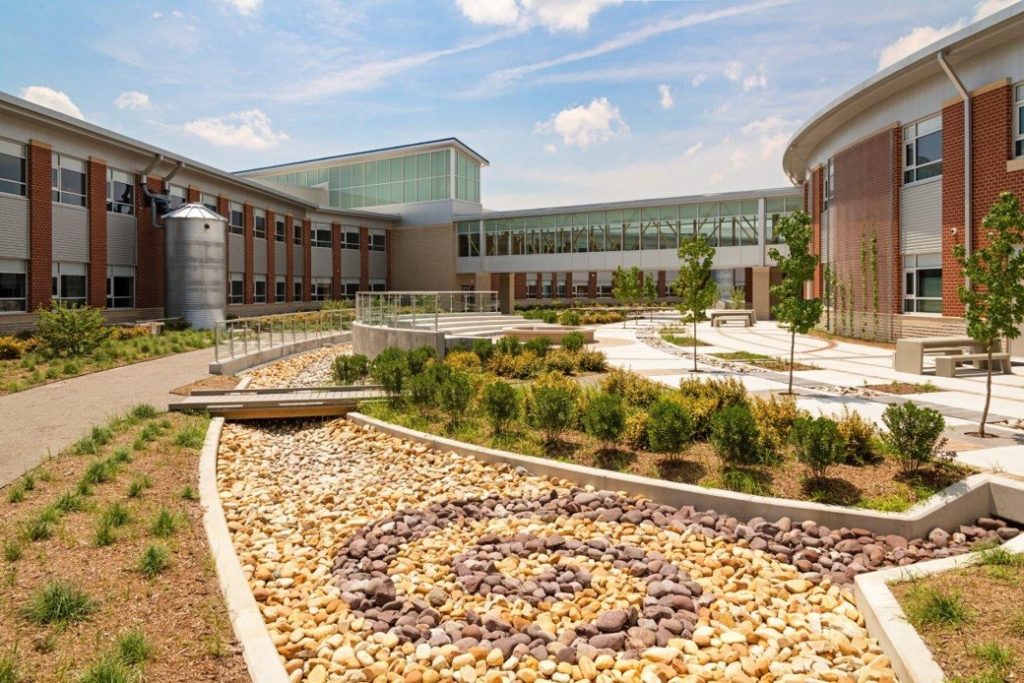 But according to Tim Cole, the school division’s sustainability officer, sustainability is much more than just building environment-friendly schools.

“The standard definition of sustainability is meeting the needs of the present without compromising the ability of future generations to meet their needs. But for us, we are looking at how do you balance, social, economic and environmental outcomes as part of the decision making process.”

In fact, the former Navy Seal who worked for an architectural firm where he managed development of the National Weather Service’s first LEED-certified building before joining the school division 17 years ago as a project manager, recalled that he himself at the time thought of sustainability as only “an interesting concept.”

“I’m an outdoors person and that makes sense to me, but I still wasn’t looking at it from a ‘we can change the world’ sustainability perspective,” he added.

That changed when he was called back to active duty shortly before the construction of Hermitage Elementary.

Sitting outside of Baghdad shortly after midnight and going through his routine of calming his mind before being inserted into an operation, he recalls focusing on the larger picture.

“My mind just settled on big picture thoughts; like why are we here, the consequences of our actions, and then my mind focused on sustainability,” he said. “I came to the realization that we can really have a much more significant impact on people if we take a much broader approach that extends beyond the built environment.”

It was at this moment that he developed the school division’s three sustainability goals:

Fast forward and VBCPS is now a nationally-recognized leader in sustainability.

“The really nice thing about us being a large public entity is that we can drive these initiatives forward,” Cole said, referring to making LEED part of the required process – something that he says many construction firms and design teams were not familiar with when Hermitage was built.

That is no longer the case since VBCPS School Board policy now calls for all of the division’s schools to be designed and constructed according to LEED standards.

As part of the construction process, contractors now have to do more than just specify the materials.

“They also have to tell you the amount of recycled content in the metal stud or carpet tile or specify the [volatile organic compounds] VOC content in paint,” Cole said. “By us coming on board and saying ‘this is how we want to do business,’ it has a large impact on our region right here.” 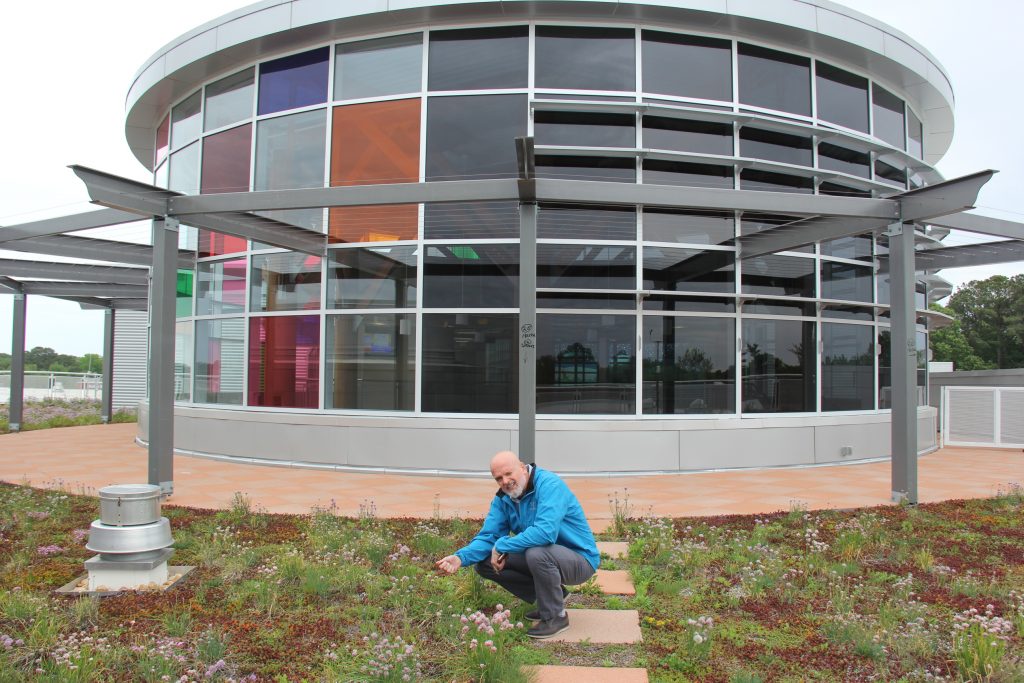 The school division’s departments have also adopted environmentally-friendly practices that have received national recognition. For example, VBCPS was recently recognized with the 2018 Green Cleaning Award, a 2017 Certified Green School Division honor, and the ENERGY Start Partner of the Year distinction for the second consecutive year for reducing its energy use by 27 percent while increasing its building space by nine percent.

Cole also cites the “Chasing the Custodian” program, which calls for custodians cleaning as team so that only certain parts of the building are lit at one time.

“It saves energy but [custodians] also work in teams and this provides a safer working environment,” he said.

In addition to saving energy, the school division is also saving money through performance contracts work where companies conduct energy audits of older buildings and replace lighting and heating and air conditioning units. Those companies are paid through the savings generated.

VBCPS also conducted an emissions study in 2011 – the first K-12 school division in the country to do so at that time – to inventory its carbon footprint and put an emissions reduction plan into action by looking at energy, recycling efforts, fuel and other contributing factors. Again, departments are contributing in many ways, including through reduced vehicle emissions. Currently, 26 VBCPS buses now run on cleaner fuels and the division has been successful in securing additional funding to purchase newer, more fuel-efficient school buses.

But for Cole, it’s the impact on future generations that is ultimate goal.

“The only way that we are going to create this exponential change that we need is if we can have this impact on K-12 schools,” he said. “We know we do a really good job of teaching students the academics, but where we can make a difference is in preparing them for the future that we set them up to inherit.” 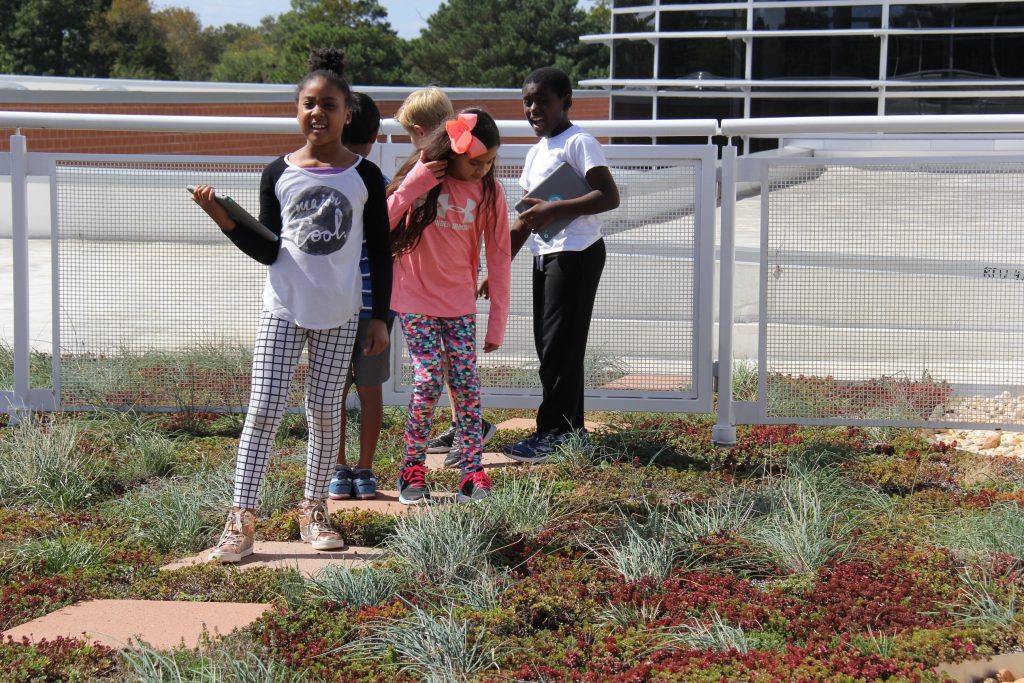 Every school in the division now has a sustainability liaison and many have teaching gardens, environmental clubs and partnerships with organizations such as Lynnhaven River Now, the Elizabeth River project and the Chesapeake Bay Foundation that are actively working with students to teach about the importance of the ocean, watersheds and other environmental factors that impact planet Earth every day.

“To be successful in the teams you need to be able to embrace risk, adapt to change and most importantly, lead by example,” Cole said. “Here in Virginia Beach City Public Schools, we intend to lead by example.”

The Governor’s Awards were presented April 5 and the VEEPSP were announced May 1. For more information about either of these programs, visit the DEQ’s website, or to learn more about the division’s sustainability movement, visit vbschools.com.

One thought on “VBCPS receives Governor’s award for environmental excellence”