The annual “Pre-K Holiday Event” was highly anticipated for students. It was organized by the Title I Pre-K office in partnership with The Noblemen – a philanthropic organization dedicated to “helping kids and changing lives.” It was held over three days at three different schools and culminated at Parkway Elementary. Children from all over the city gathered eagerly in the school gymnasiums, excited to see what kind of toys they might receive.

“The purpose of the event was to provide families with an opportunity to celebrate the holiday season through gift-giving, holiday cheer and togetherness,” said Laura Silverman, director of Title I programs.

This year, the event helped about 400 prekindergarten children from various schools and classrooms, as well as their siblings, get the gifts they wanted. A total of almost 700 children received

gifts from this heartwarming event. It was orchestrated with the help of over 100 volunteers – the youngest one was 6-year-old Olivia Olson, who came to the event to help because she “wanted to make the kids happy, and it’s kind to help others.”

As the doors opened, a team of volunteers directed the families into the gymnasium. Each child received a golden ticket and selected three categories of toys that they were interested in. The volunteers, who were referred to as ”shoppers,” used the children’s golden tickets to put together the gifts based on their interests.

There were dolls, stuffed animals, arts and crafts, action figures, cars, trucks, trains, board games and puzzles for all to enjoy, and even a few special gifts for two lucky children: bicycles. The pre-K students received two gifts; the siblings were not excluded from the party – each one received a toy.

Along the journey, volunteers greeted the families and directed them to the next station: the candy canes. From there they grabbed a free book titled “The Snowy Day.” The families then went to a table with stuffed animals, where the children beamed with joy and gratitude as they picked out their favorite one.

In the meantime, behind the curtains the shoppers hurried to complete children’s orders because it was time for the final gift. 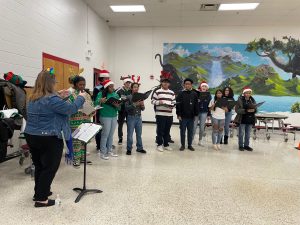 While the children waited at their final stop, the Green Run High School choir entertained them with a selection of Christmas songs.

Vladislav Pleune was especially thrilled when he was selected to receive one of the bicycles, although at first he was a little timid about all of the attention. Others simply held their new toys close, unable to contain their excitement. 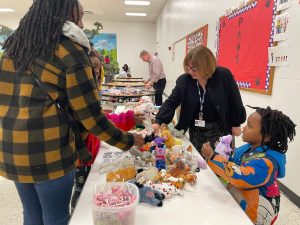 Noblemen’s tradition of gift-giving dates back to 2005 when they donated 67 toys. This year they had 14 events and made over 6,000 children happy – many of whom were from Virginia Beach. Some of the toy recipients were 1,200 military families, the Autism Society and over 900 foster children.

Pete Rouse, the philanthropist behind The Noblemen, stays busy collecting toys and giving back to the community all year long. He was at hand to ensure everything went swimmingly. 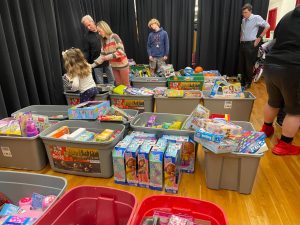 “We constantly find ways to give toys because we receive donations all year,” said Rouse. “It is a fun challenge to have.”

The Pre-K Holiday Event was a joyous celebration that brought the community together in the spirit of giving and love. It was a reminder of the true meaning of the holiday season, and a moment that the children would always remember.

–by David Schleck What keeps someone working at Virginia Beach City Public Schools for 50 years? Let Donnie Parker tell you. “I’ve always liked my job,” he said. “My shop […]