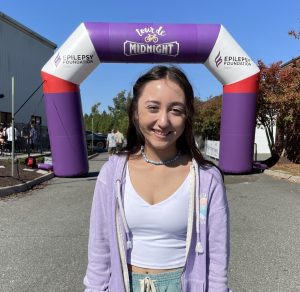 “Over 11,000 students in Virginia have epilepsy,” said Brie. “Only the nurses really knew how to handle epilepsy, and sometimes the nurse can’t come down, so this act really gives students with epilepsy that peace of mind.”

The Jamie and Brie Strong Act requires school personnel to take training on seizure detection and first aid response every two years, as well as mandates action plans for all students diagnosed with epilepsy or a seizure disorder. The plan is a part of the Epilepsy Foundation’s nationwide initiative to pass seizure safety legislation in all states.

Only 19 states have legislation requiring seizure safety in school, according to epilepsy.com.

“I was 11 years old, in the sixth grade, when I first started,” said Brie, who has epilepsy. “It was mostly going up to Richmond to convince these senators and delegates in the General Assembly. I was in and out of the hospital at the time due to seizures, so between that and going to Richmond, I missed tons of school.”

Epilepsy is a chronic disorder that commonly consists of recurrent and unprovoked seizures, according to the Epilepsy Foundation of Virginia. People are diagnosed if they have two or more unprovoked seizures without a known cause or medical condition. Epilepsy is one of the most common neurological disorders, around 50 million people globally have epilepsy, according to the World Health Organization (WHO). Similarly, epilepsy is one of the oldest known conditions, with records dating back to 4000 BCE.

“I remember first getting diagnosed at 7,” said Brie, “I still remember my first seizure at school, how scary it was.”

“It was hard work, and it was a great effort, but I’m happy it will save lives,” said Brie.

–by David Schleck What keeps someone working at Virginia Beach City Public Schools for 50 years? Let Donnie Parker tell you. “I’ve always liked my job,” he said. “My shop […]