But it wasn’t the first time that Vogt had asked the same class that very same question.

Flashback six weeks to Feb. 5, in the Rosemont Forest art classroom. Vogt and the first-graders’ teacher, art specialist Pamela Thompson, stood before the eager learners just before they were introduced to Salem High School’s theater students. 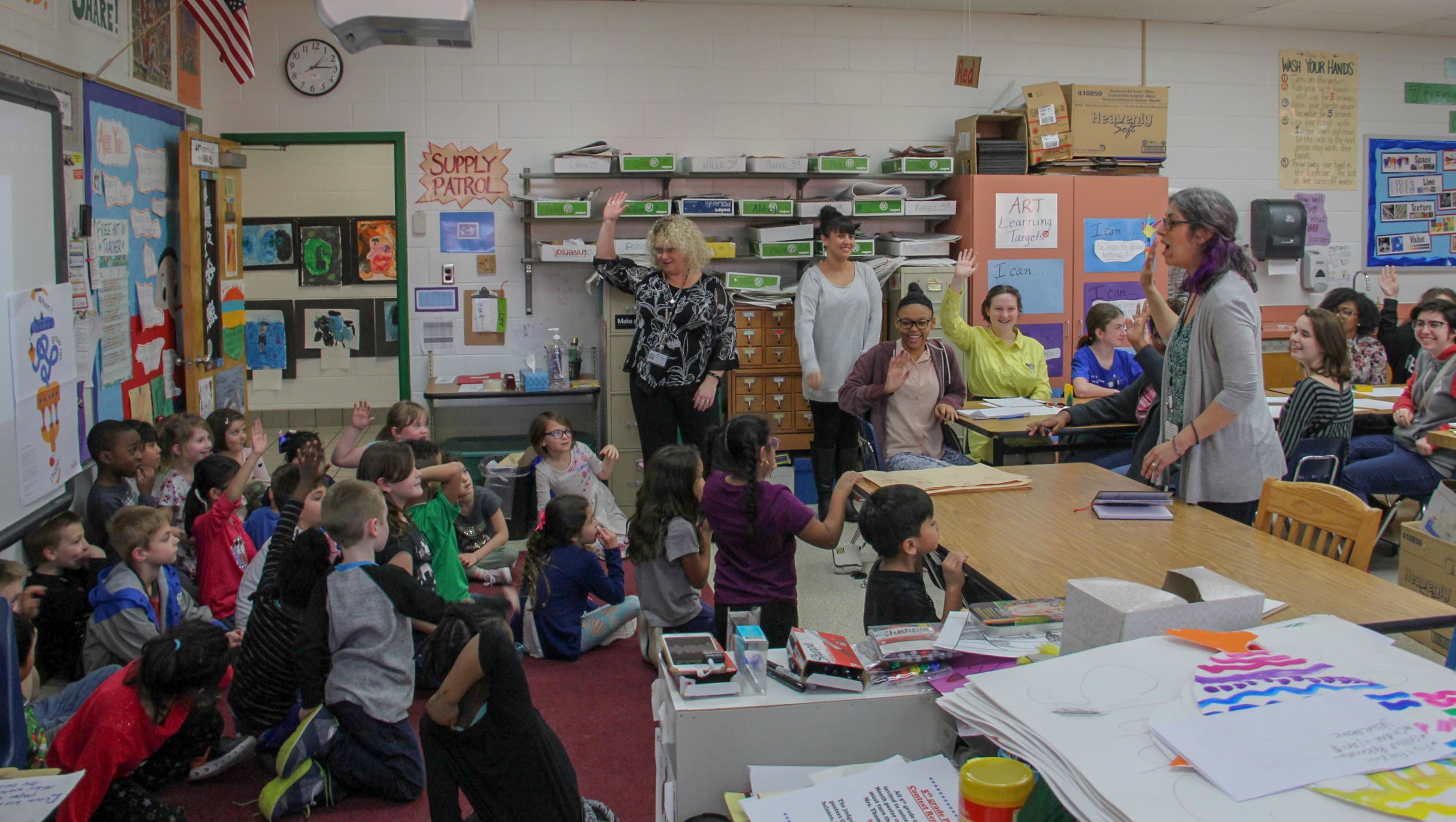 “It’s doing something more meaningful than just reading a script and analyzing a character on paper and then creating it in theory,” said Vogt of the exercise for her theater students. “This is talking to a real life character…a first-grader….a person. Trying to find out who they are. How their costume design work can be inspired by a real person.”

This collaboration was the brainstorm of Virginia Beach City Public Schools Fine Arts Coordinator Chris Buhner, who knew these veteran educators would work well together, despite the fact they had not met previously. 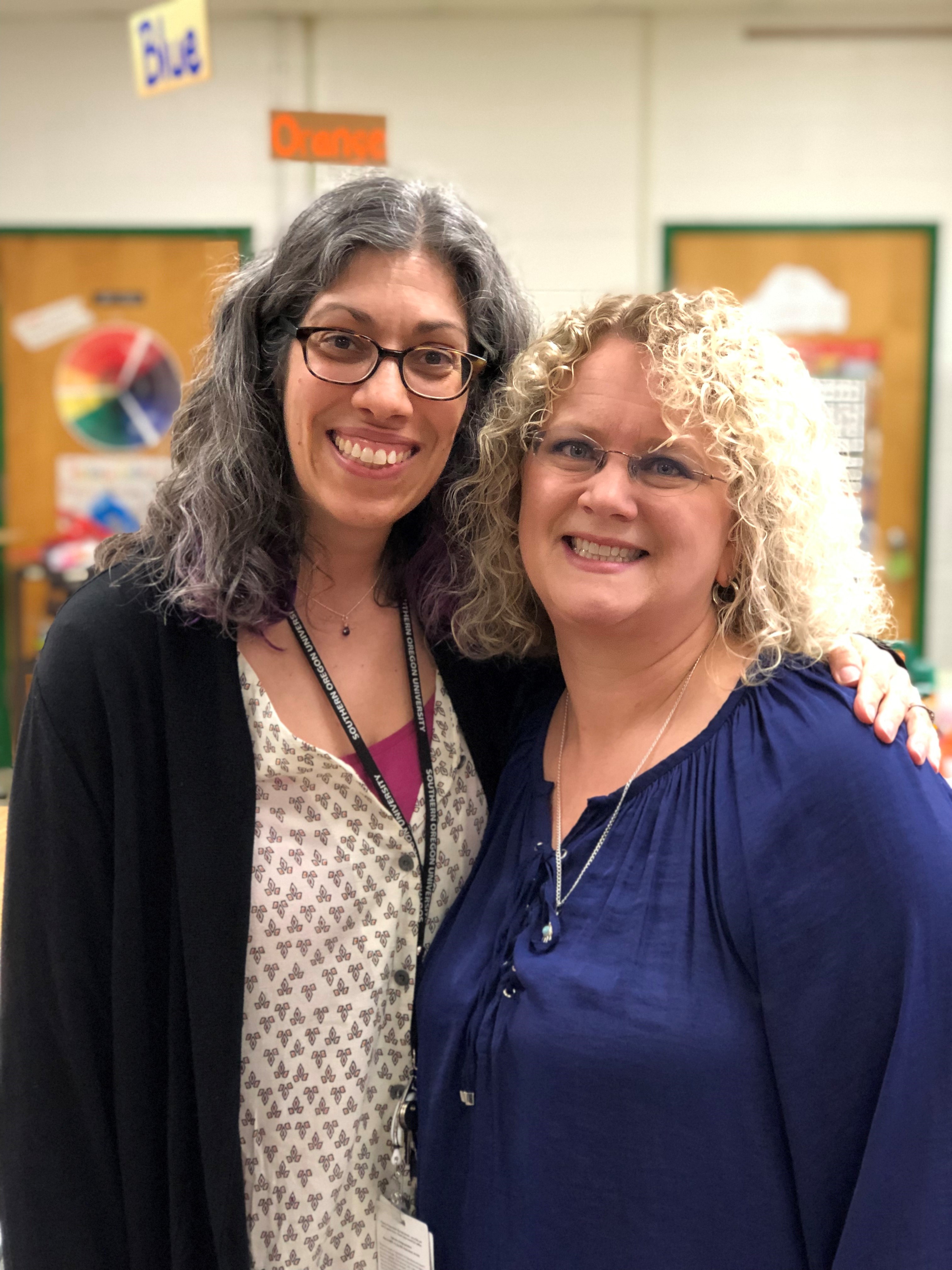 Thompson was all in as soon as she was asked. “Anytime I get a chance to work with another school, I jump on it with both feet.”

Tenth-grader Taylor Saunders confessed to being nervous. “I don’t have siblings. I don’t deal with little children a lot. So I wasn’t sure what they would be like. But I got here and ended up being paired with Sophia and she was so adorable and shy, and she just reminded me of me when I was her age. And she ended up drawing a Yorkie and I have one. It was like fate. I am very excited about this.” 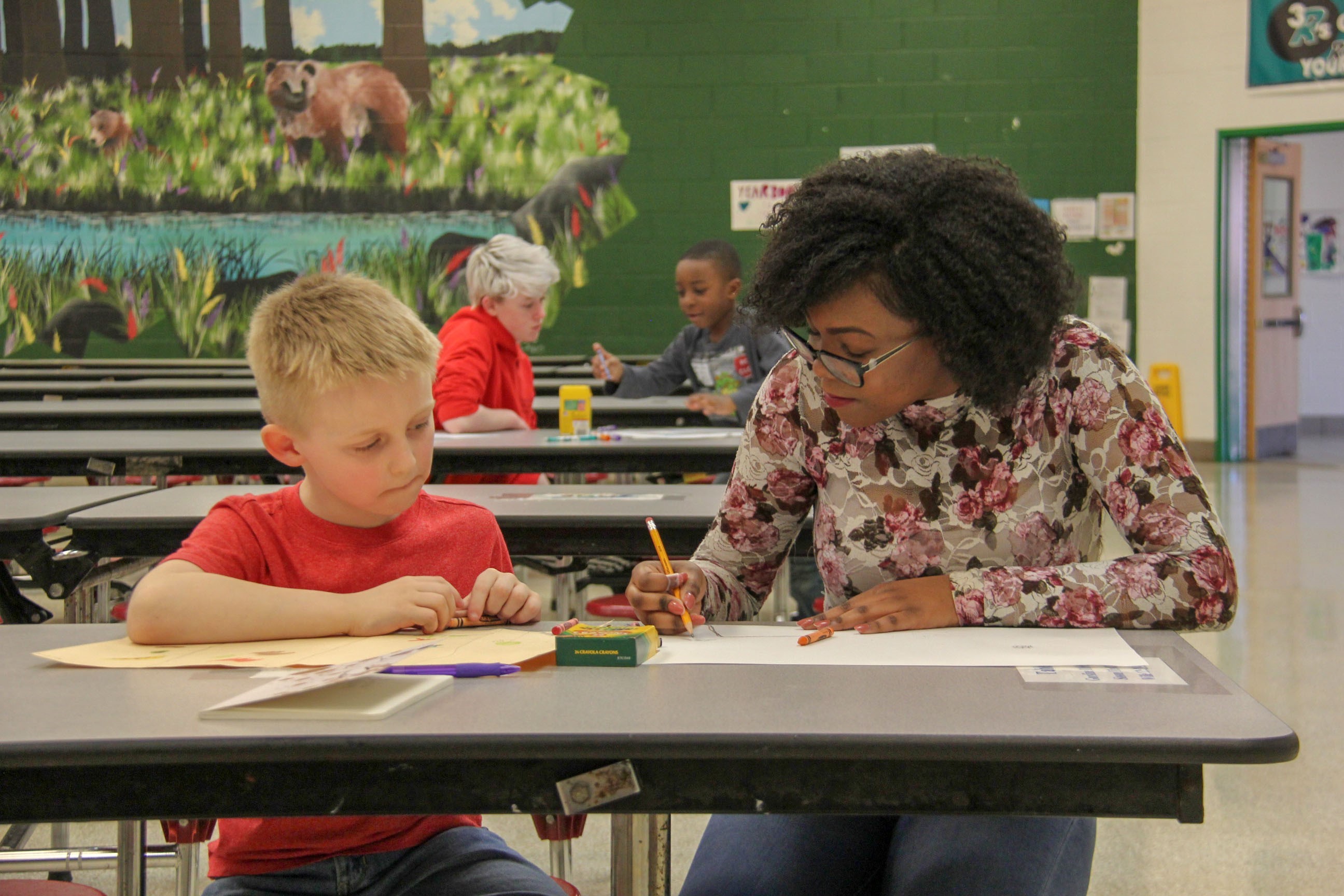 Connor Land and Clara Synowiec were teamed-up with first-grader Ben Williams, and his creature was a bit more complicated.

“It’s a frog that wears a jetpack and boots,” Synowiec added. “In space. And in the water.” 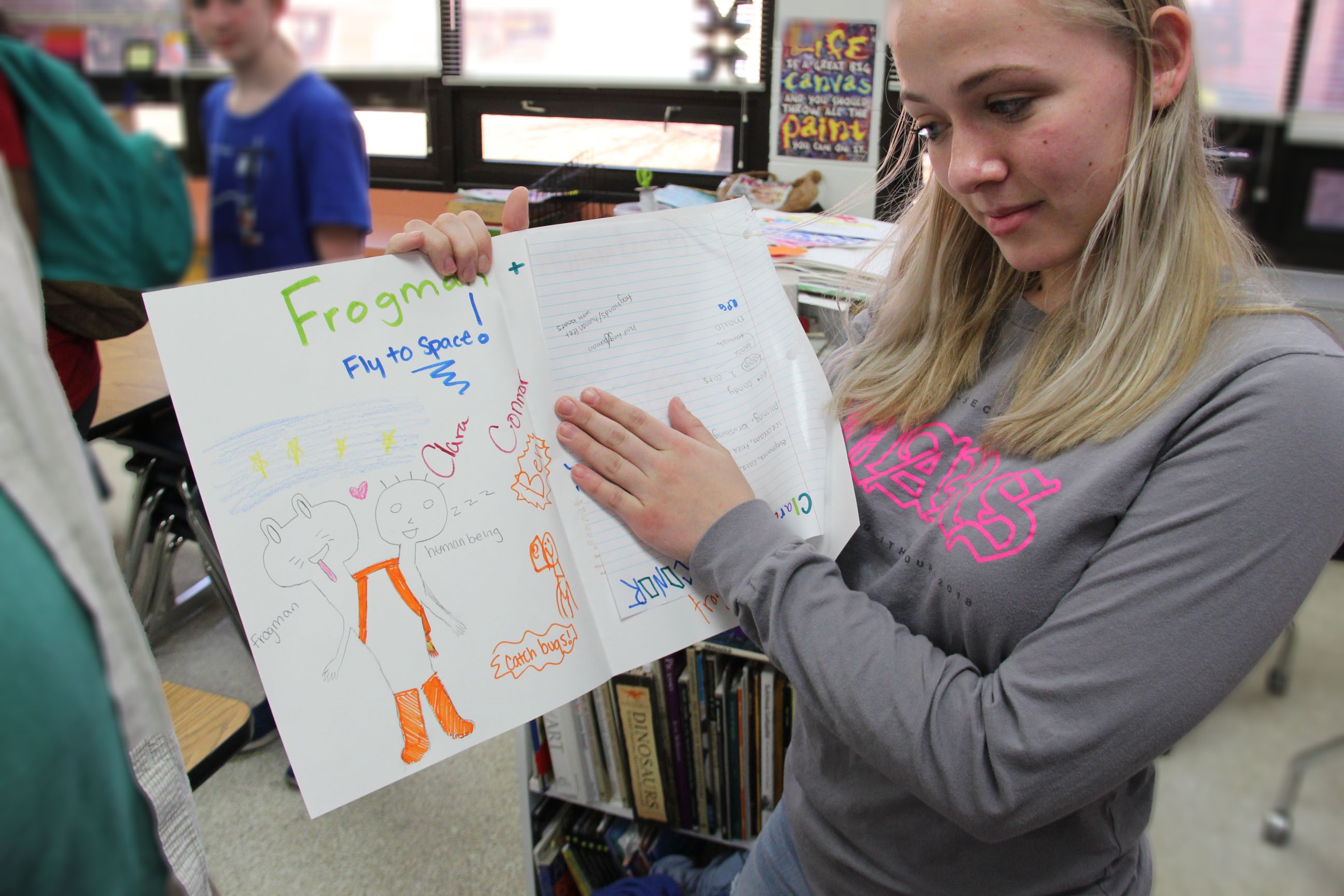 The theater students returned to Salem High School with the drawings and, over the weeks, created sewing patterns and built three dimensional toy sculptures based on them. Meantime, Vogt looped in her Acting Lab students and had them to come up with a short performance based on the sculptures.

Which leads back to Rosemont Forest on a late March afternoon.

Following the performance that introduced each stuffed toy, high school students were reunited with their first-grade partners and officially presented their creatures. Squeals of delight were followed by hugs, laughter and chatting.

Morgan Small confessed that creating Macy Springer’s cat Priscilla was not fun at first. “I need to go back to seventh grade and fix up my sewing skills,” he laughed. 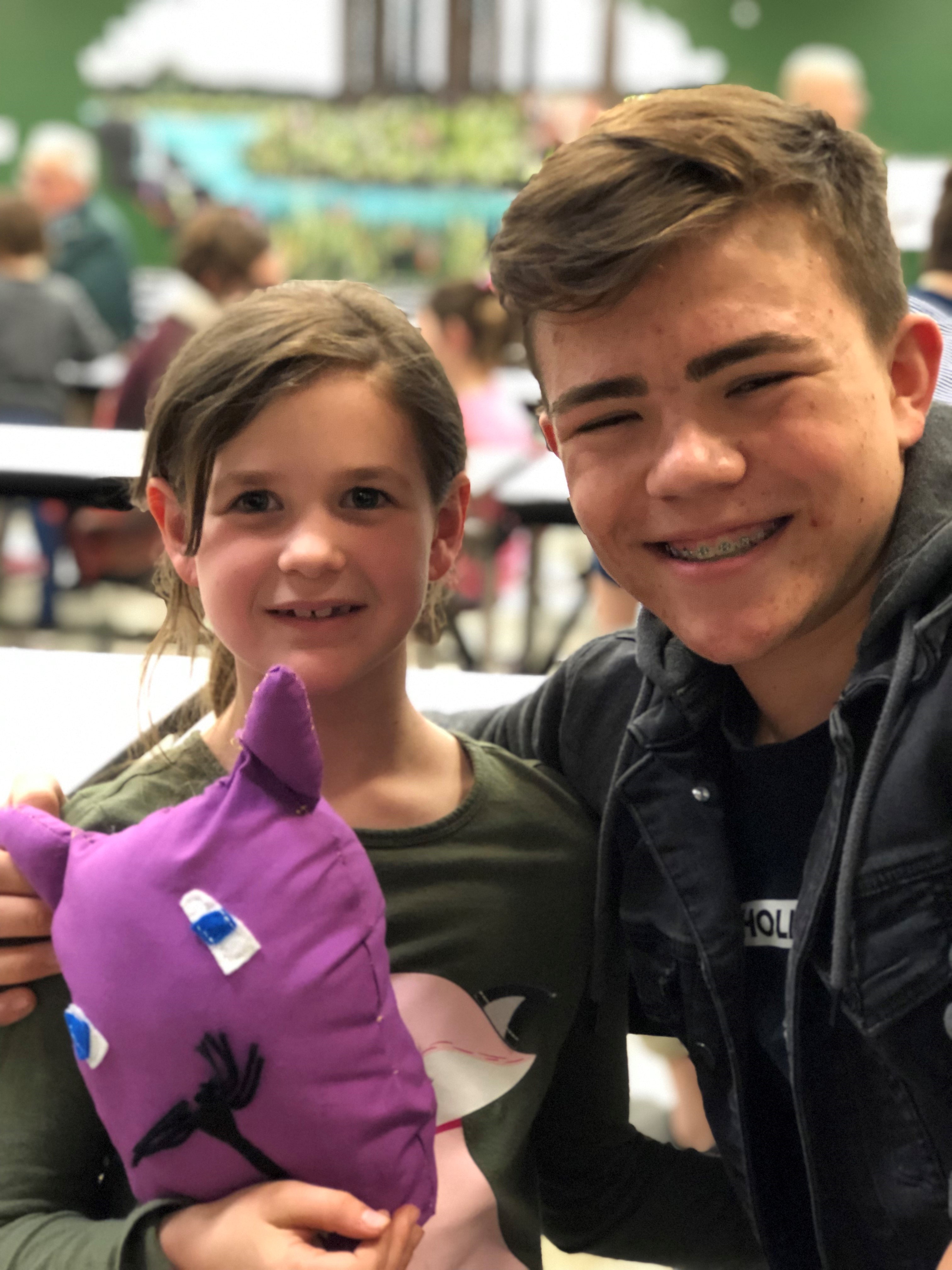 Vogt remarked that some of her students intended to continue sewing after this project. But the collaboration ended up being so much more for her class.

“They’re thankful that they’re in a program like this that challenges them beyond what’s in the curriculum and what’s in a textbook,” she said. “To give them these opportunities to kind of reach out into the community and make it about something larger than a grade. That’s exactly what I wanted.” 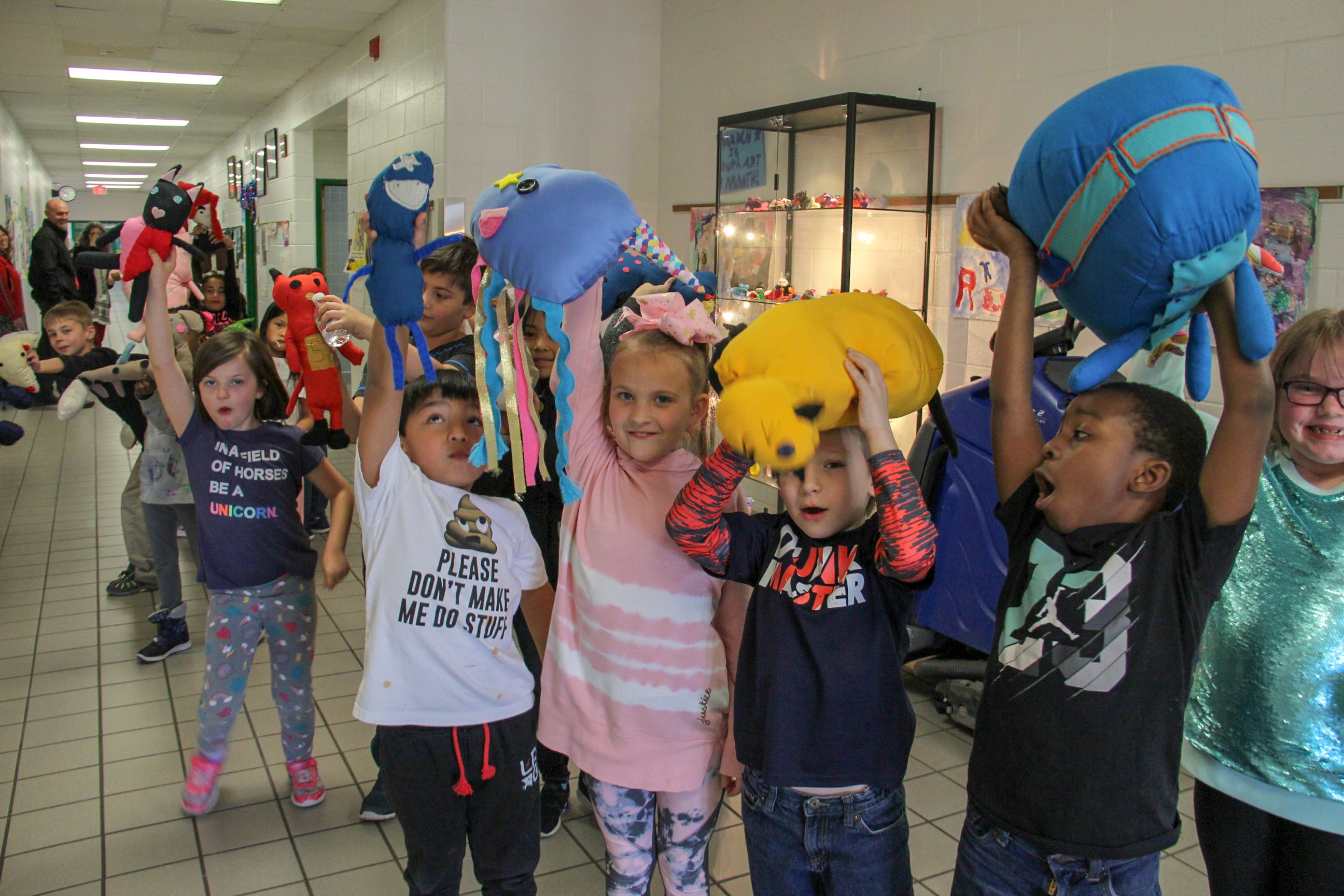