Jasmine Crispin had never sold her artwork before. Then again, she’d never tried.

The Salem High School sophomore had one such opportunity when she and her art classmates visited the Java Surf Café in Virginia Beach to see their artwork on display. The coffee shop’s assistant manager admired all of the charcoal drawings for weeks, but she was partial to the one by Crispin, featuring a rose to represent the high school artist’s middle name.

Flattered and little bewildered, Crispin accepted the offer to sell her piece and agreed to sign the artwork at the assistant manager’s request. 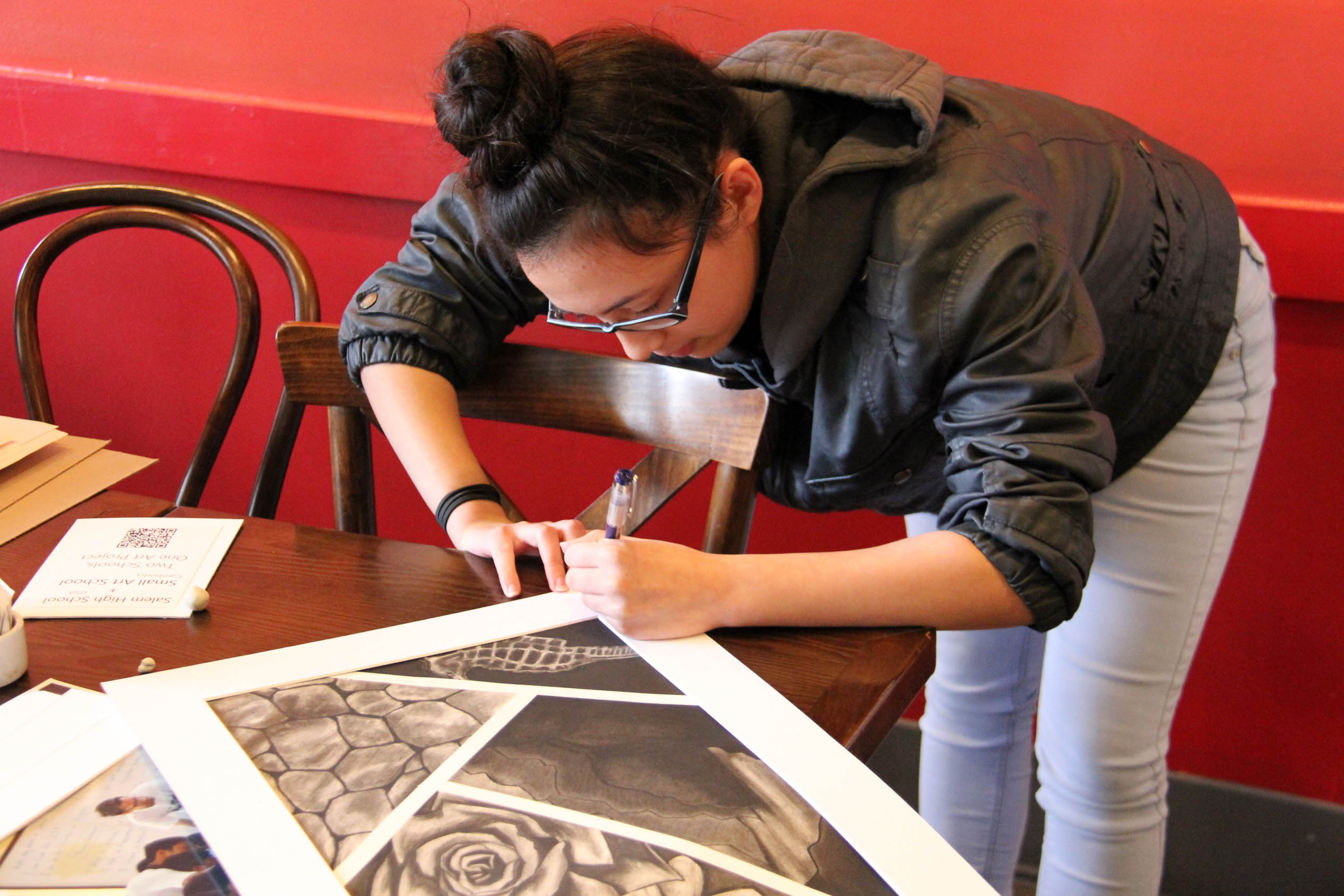 “They’re beautiful,” said the assistant manager of the drawings. “Everyone who has come in has admired them. I always tell them this artwork was done by high school students.”

Salem High School art teacher Jared Boone asked the local business if it would exhibit student artwork related to his Two Schools, One Art project. Salem was one school and the Small Art School in Siem Reap, Cambodia was the second. It provides free art lessons to underprivileged children.

“I knew I was going to be in Cambodia over the summer, so I started contacting international school principals in that area,” Boone said. “They recommended this school that was founded by a retired Japanese art teacher, so they just linked us and we hit it off. We went back and forth, and I started constructing lesson plans in the spring leading up to [my visit].”

He replicated the summer project with his Salem students in the fall and is working with the Small Art School founder to encourage student communication about their shared artwork, respective cultures and artistic processes.

“The focus is on texture, line and value, but the snapshots that you see in each four of the areas that they break apart are supposed to be glimpses into their contemporary teenage lives,” explained Boone. 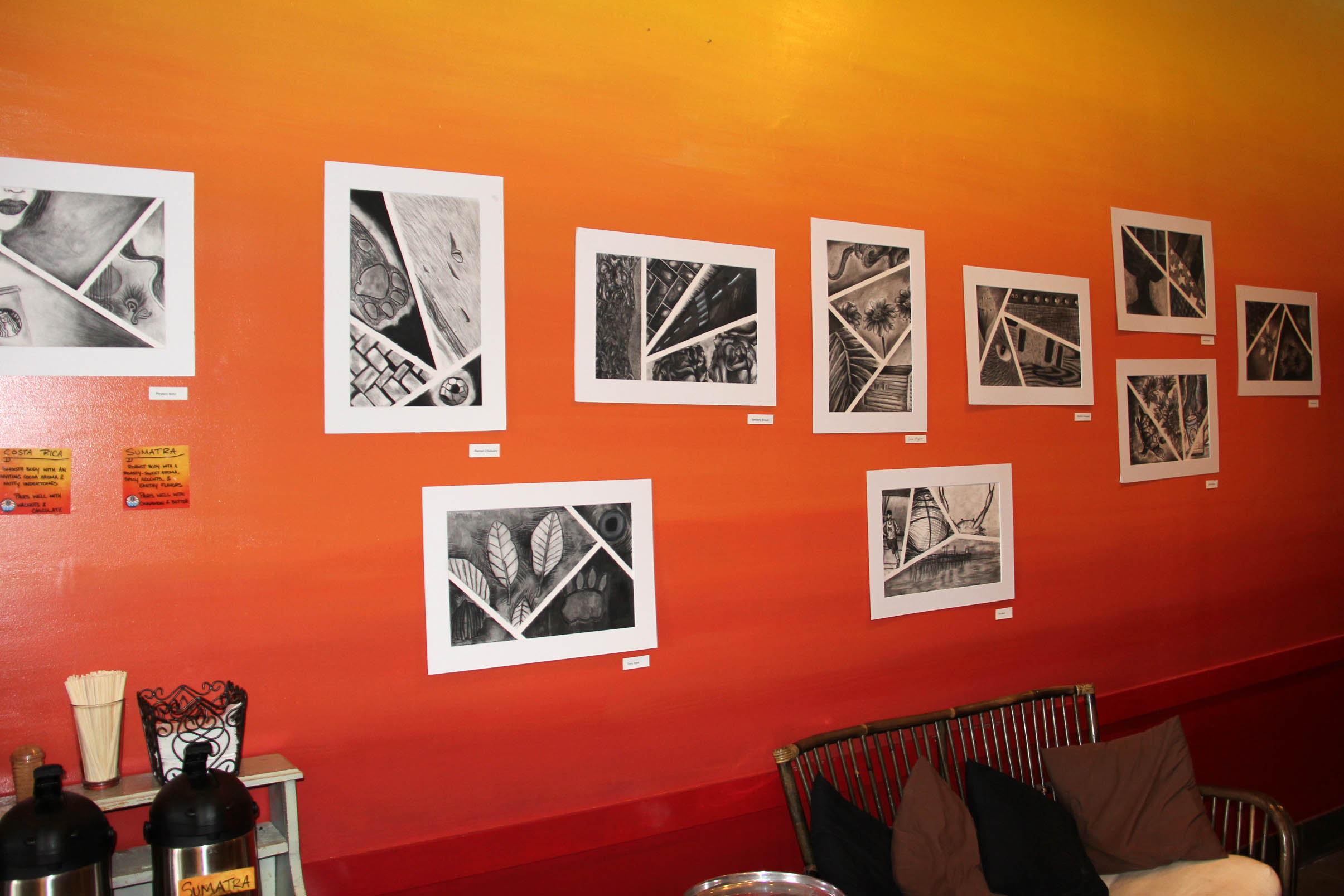 In Cambodia, students started their project outside the studio at Angkor Wak, a temple complex known for being the largest religious monument in the world. Back in Siem Reap, Boone said, “they started looking around the community, looking for textures that represent them or their culture.”

“Then I returned to the states,” added Boone, “and thought this would be about the individual, the identity of the student, and they would have to find textures that are more representative of them.”

In Crispin’s artwork, her rose was joined by a seahorse, cliffs on beach and a stone pathway.

“I drew that because I’m hardheaded,” she said of the shaded stones. “And they’re closely fitted together. It’s like they’re holding each other up.” Crispin credits friends and family as being her stabilizers.

Standing next to her artwork, Alexa Skiba explained that she took the assignment “really literally.”

“He said to draw what you see everyday, so I just drew a picture of me,” she said smiling. 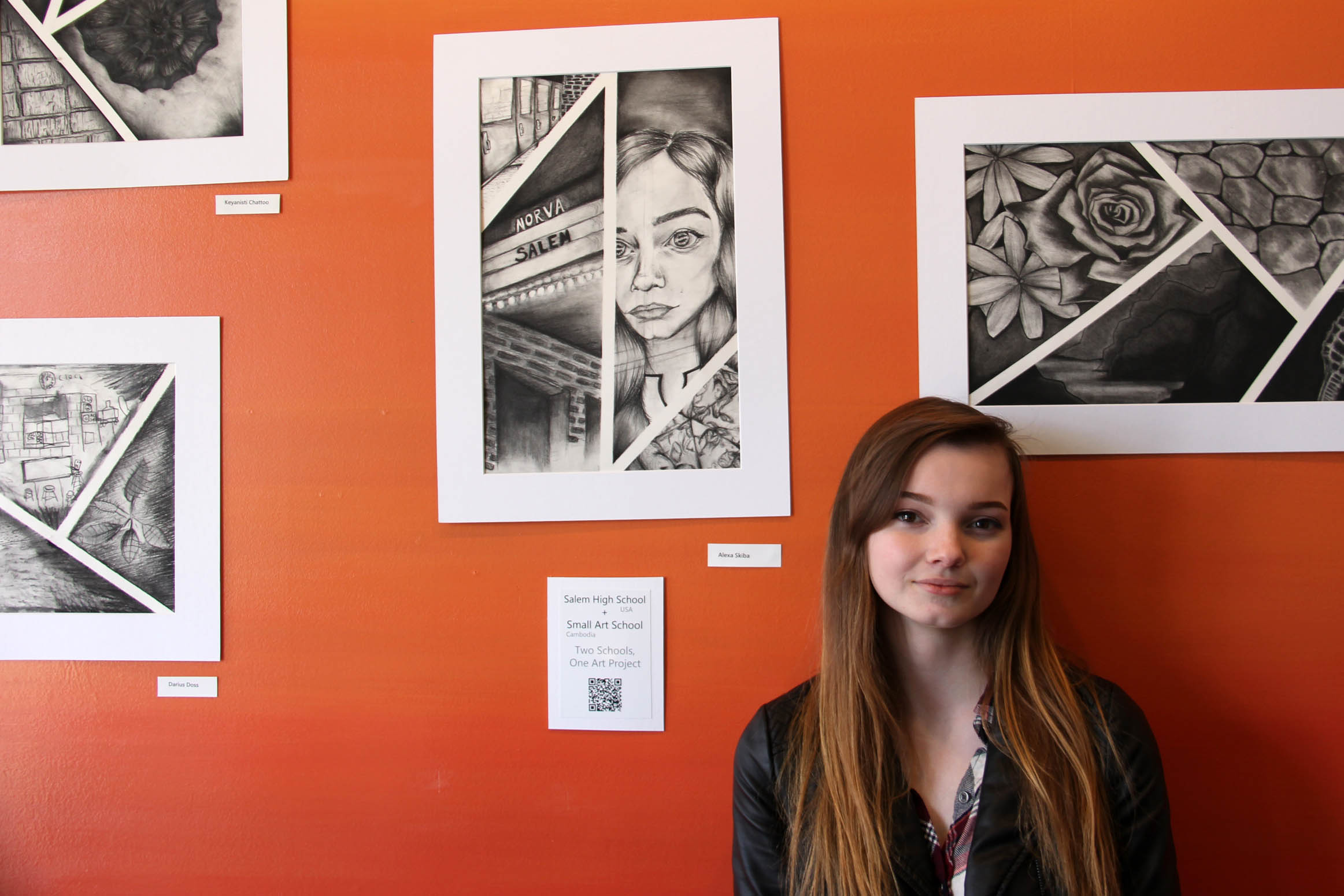 In addition to the self-portrait, Skiba’s work featured a marquee, school doors and food.

“I’m at the Norva a lot,” she continued. “I was just there at a concert on Friday. It’s where I like to be the most because it’s just so much fun and everyone has such great energy there. Those are my school doors. He had us go outside one day when we were drawing pictures of nature, and it was one I had on my phone so I thought it would be really good texture. And I drew a pizza because we were just trying to think what would go perfect in that tiny triangle I left myself, and I said, ‘I’ll draw a pizza.’”

Sisters Becca and Kelly Van Deven each featured piano keys in their artworks. Both are music students in the Visual and Performing Arts Academy at Salem though they seem to exhibit talent in the visual arts as well.

Horticulture, however, is not one of Kelly’s talents.

“That’s why I drew a cactus,” she said. “I love plants, but that’s been the only kind of plant I’ve been able to keep alive. All others kind of fail.” 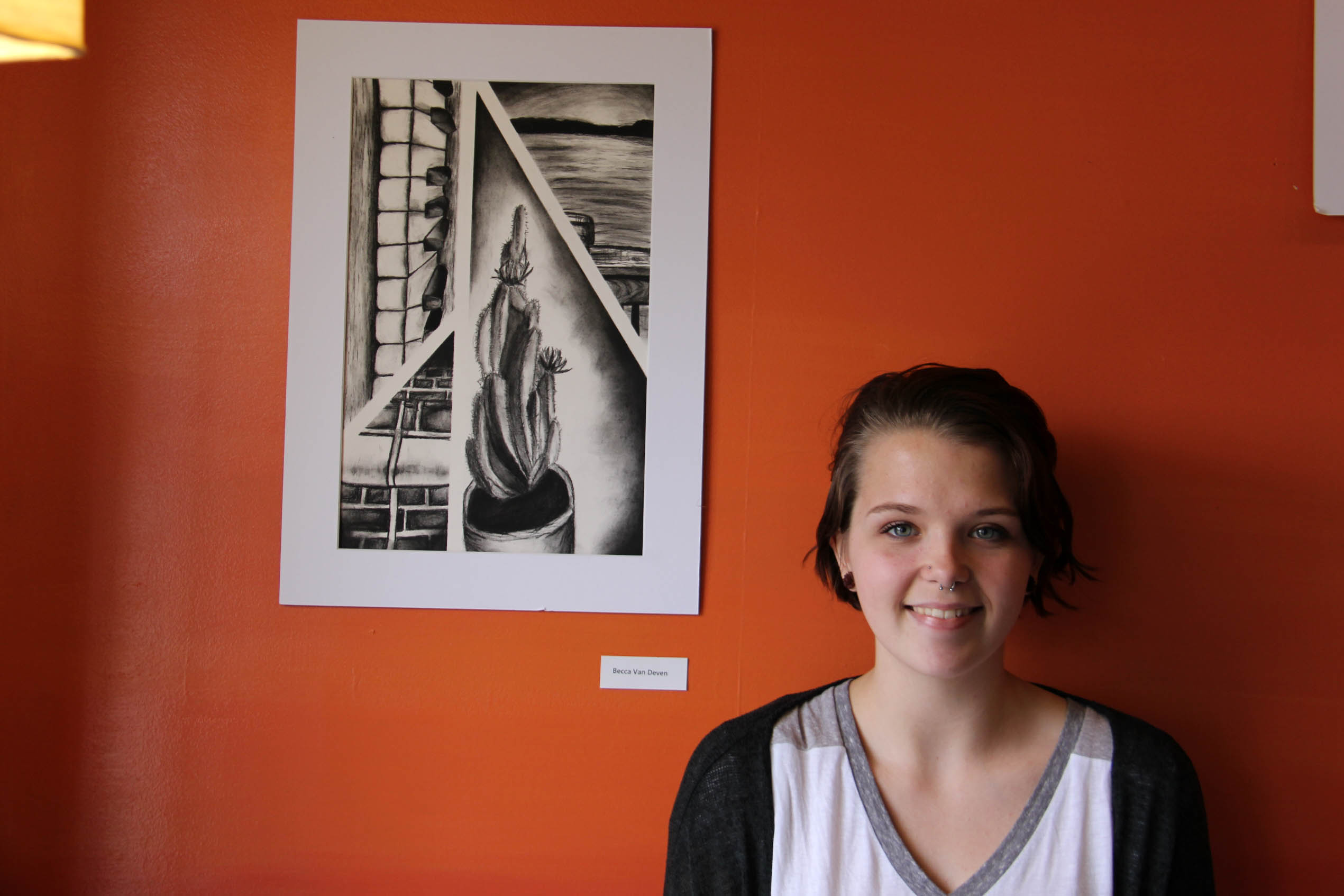 The view from a dock illustrated in one quadrant provides a glimpse of Stumpy Lake.

“I spend a lot of time there and it has a lot of meaning for me. It’s beautiful,” Kelly said.

“Everyone thinks of the beach here, and the beach is really important to me, but Stumpy Lake is a different kind of nature that you can get here. Like the watershed and surrounding areas,” she added.

Students sharing information about their respective communities, their cultures and their artwork is a focus of project. Boone thinks it is one that teachers can replicate, and he hopes to share not only the lesson plans he developed but also his lessons learned. 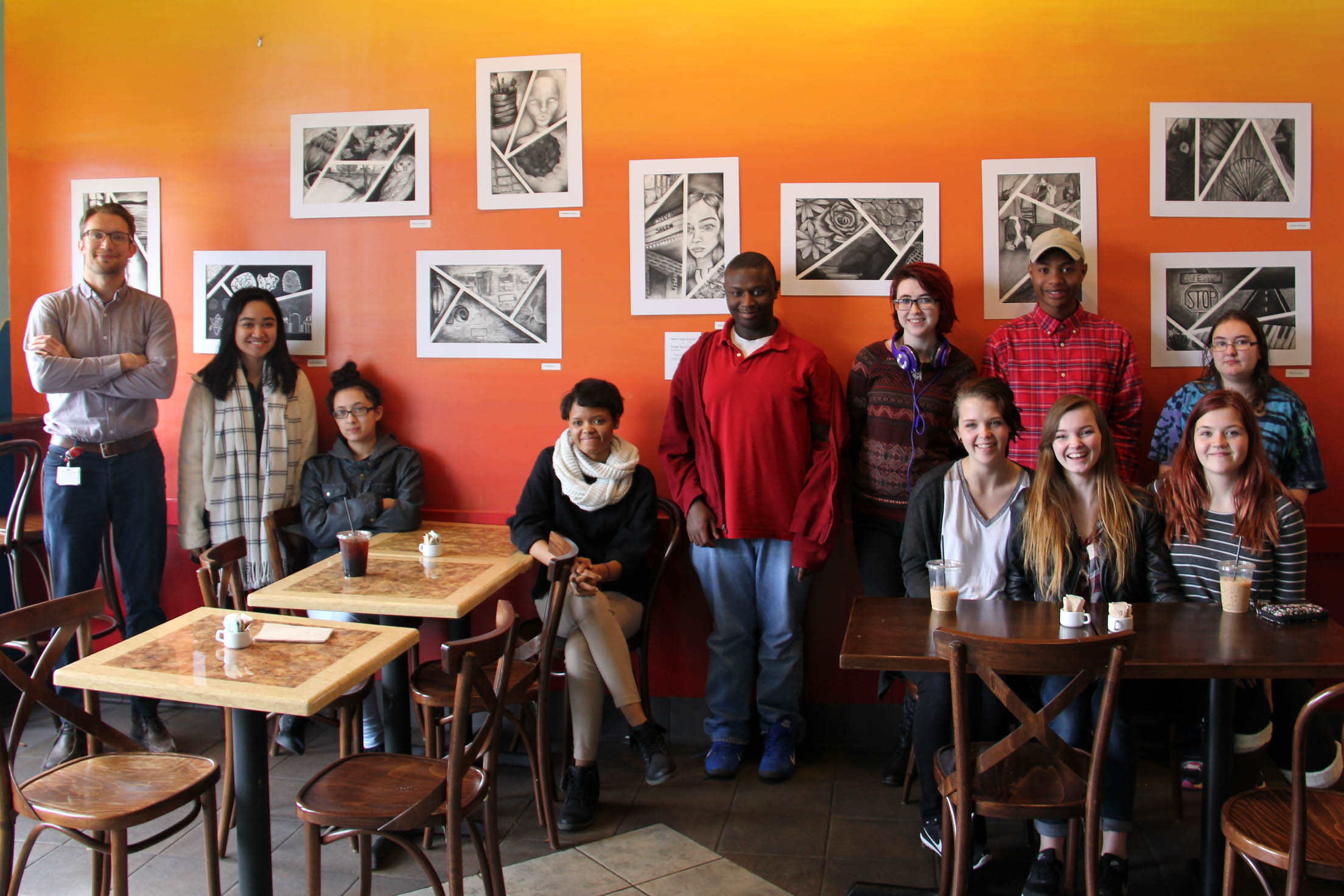 “I’ve worked with schools overseas before, but not related to visual arts. Usually it’s related to [English as a second language] or in some type of other volunteer capacity,” Boone said. “I’d like to make it more approachable and provide a starting point for a teacher who wants to do this. They can look at my resources to start their school hunt – some templates for letters and things for reaching out.”

The Java Surf Café exhibit was another means for Boone to spread the word. In fact, the owner agreed to showcase Salem students’ artwork every February in an ongoing partnership.

Boone reflected with coffee in hand, “It’s been great to get the kids more exposure, let other people see the project and get those ideas brewing.”

Boone was awarded a Virginia Beach Education Foundation (VBEF) grant to support this project. The Kiwanis Club of Norfolk Foundation and the Dr. Sheila Magula Fund were grant underwriters. For more information on how you can support creative and innovative learning projects in Virginia Beach City Public Schools through the VBEF, contact VBEF coordinator Debbie Griffey at debbie.griffey@vbschools.com or 757-263-1337.