Tai’tyanna Towe knows that she wants to be a scientist.

“I want to be a scientist because you get to do experiments,” the Bettie F. Williams Elementary School rising fifth-grader said as she soldered a piece of circuit board together in her circuitry class. 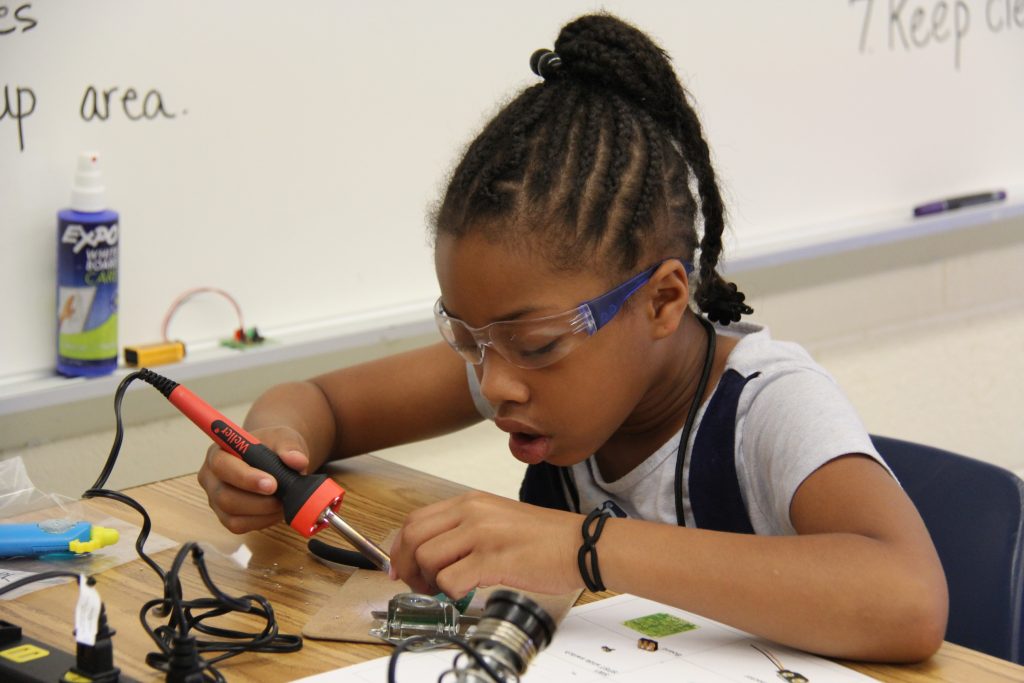 In the classroom next door, College Park Elementary rising fifth-grader Teon Smith was calculating angles and measuring distances so he could program his Dash Robot to navigate the path of blue tape positioned in various zigzag patterns on the floor. 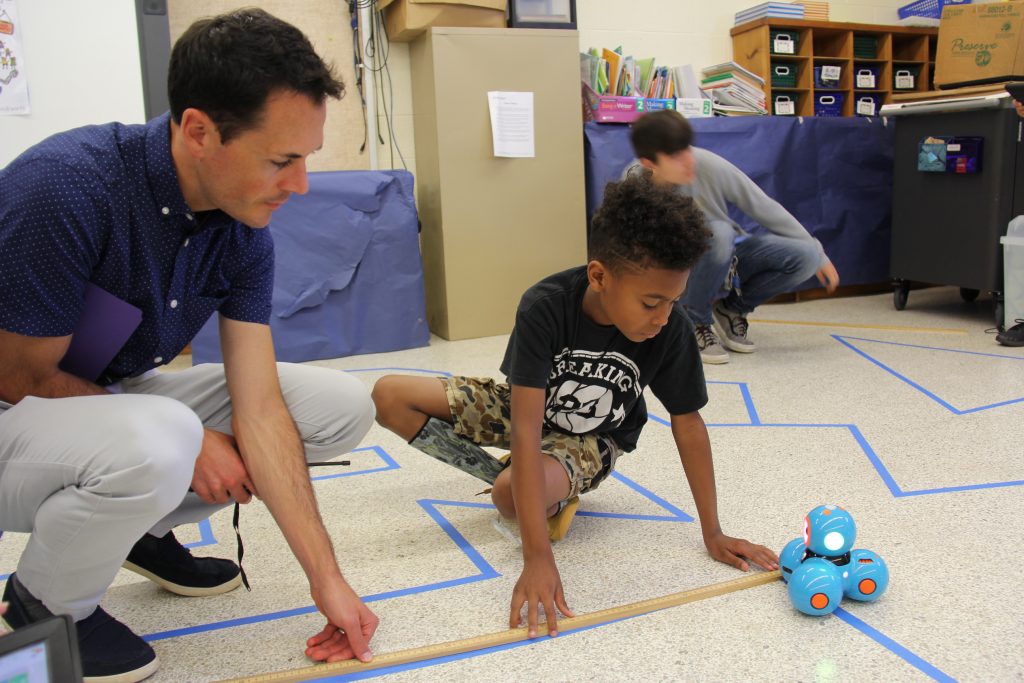 “I like it because we learn different types of electronics, which we’ve never used before,” he shared while simultaneously selecting a string of code on his iPad that would program his robot’s path. 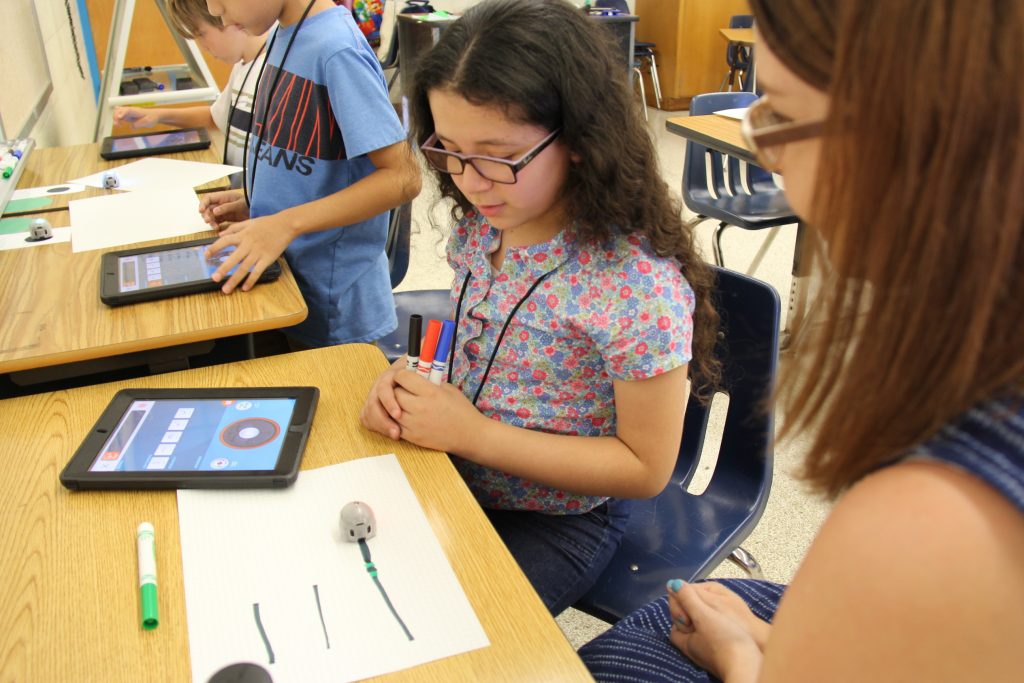 Around the hallway in the crime scene investigation class, students had just finished exploring the science behind fingerprints, which helps build their critical thinking skills to pinpoint differences. Next, they would learn about facial recognition software that is used in iPhones, apps and even police investigations. That lesson would require them to use their math, measuring and science skills. 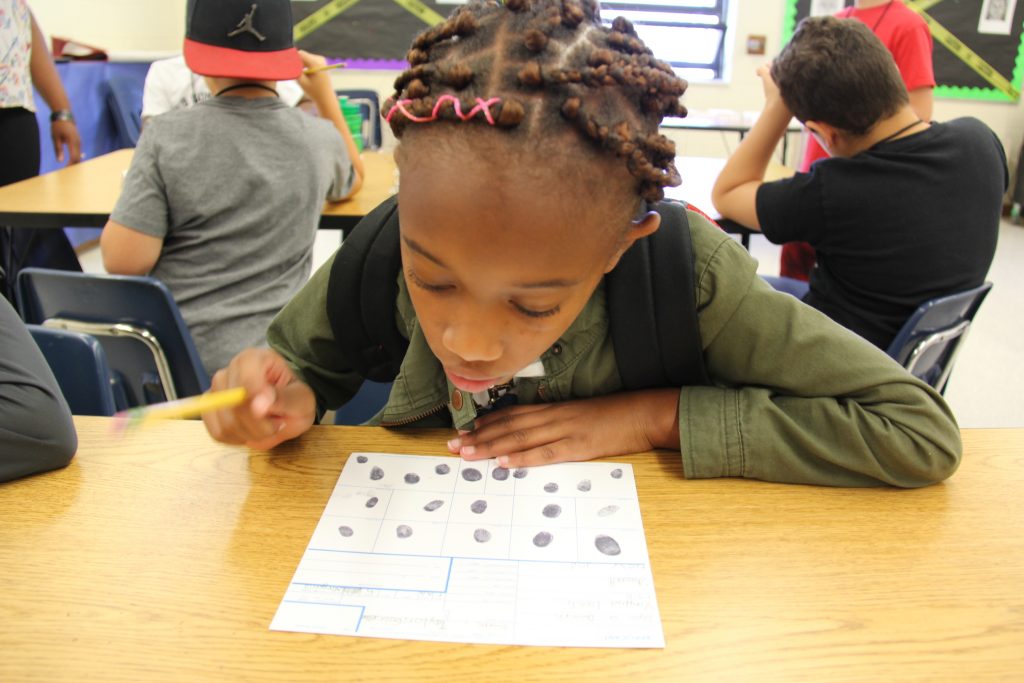 Three doors down, students were using 3D pens to sketch bookmark designs on construction paper that would transform their sketches into three-dimensional plastic objects.

“It’s pretty exciting because you can draw something in 2D and make it into 3D,” said Jasmyn Miller, a rising fifth-grader at Seatack Elementary An Achievable Dream Academy.

When asked if that is the wave of the future, she wisely said no.

“I think there are going to be 4D pens and printers.”

These students are enrolled in this year’s Title I Science, Technology, Engineering and Math (STEM) Summer Camp for elementary students, which runs for two weeks at Rosemont Elementary. The program draws students from across the division’s Title I elementary schools.

“It’s an opportunity for them to get to know what the STEM fields and concepts are all about,” said Ryan Foster, math specialist at Bettie F. Williams Elementary and one of the camp’s onsite coordinators. “It’s about getting them exposure and new experiences that ultimately would lead them to discovering career paths in the future that involve STEM fields.”

According to Foster, fourth and fifth grades were chosen for the camp because as students approach middle school it helps them know that they are capable of completing higher level work.

“The camp really builds their confidence,” he stated while also noting that it helps them as they contemplate middle school academic courses.

But most of all, the lessons are designed to help them learn, according to the standards of learning, while having fun.

“They are learning naturally about these concepts by hands-on exploring and playing. Then the teacher comes in on the back with direct instruction helping them learn the vocabulary and make that connection to the long term,” Foster stated. “The teacher will share with them, ‘Okay, this is what you just did and what you just did is what people are actually doing for this job in the field.’”

The elementary camp has been so successful that this year it was expanded to a middle school level summer STEM camp for Title I students.

Meanwhile, the elementary level camp continues to evolve and even added two new classes this year based on teacher expertise.

“We have a teacher who is a music teacher during the school year so he’s teaching students how technology is used to digitally enhance music and create soundtracks,” according to Foster.

Another new addition is the 3D printing class, which is more than exposing students to 3D technology.

According to Foster, the class “brings in a lot of math concepts because they have to understand measurements and three-dimensional shapes in area and volume.” Students will also learn about computer-aided design.

A field trip to the Virginia Air and Space Center is also coordinated during the first week of camp.

“They have a lot of things there that you can’t find anywhere in the world such as the lunar modules that once landed on the moon,” Foster stated. While there, the museum arranges for students to participate in educational programs related to STEM, such as a small lab filled with electronics and a 3D IMAX movie about robotics.

For the second and final week of the camp, students invite their parents for what’s called “Challenge Day.” On this day, students choose a project to showcase to their parents using what they’ve learned during the camp.

In the end, Foster sees the STEM experience as one that will help them in the future.

“I always look at it as more than giving them exposure,” he said. “It’s giving them confidence and helping them identify themselves with a practitioner in the field that they normally wouldn’t think about and instead say to themselves, ‘I could be a mathematician,’ or ‘I could be a scientist.’ It’s helping them get excited about what could be their future.”

Note: If you’re interested in next year’s camp, please know that registration packets are sent to all third- and fourth-grade students at every Title I school at the end of April.