A plane crashes into the Chesapeake Bay. Although all individuals on board are safe, oil is rapidly spilling. Three teams of four to five people are working on density experiments to determine which method — whether it be booms, sorbents, skimmers or dispersants — would be the best way to clean up the oil and save the bay.

Although the scenario is hypothetical, what is real is the experimentation to solve the spill being conducted by students in the science and math class in the school division’s first-ever middle school Title I Summer Science Technology Engineering and Math (STEM) Camp. 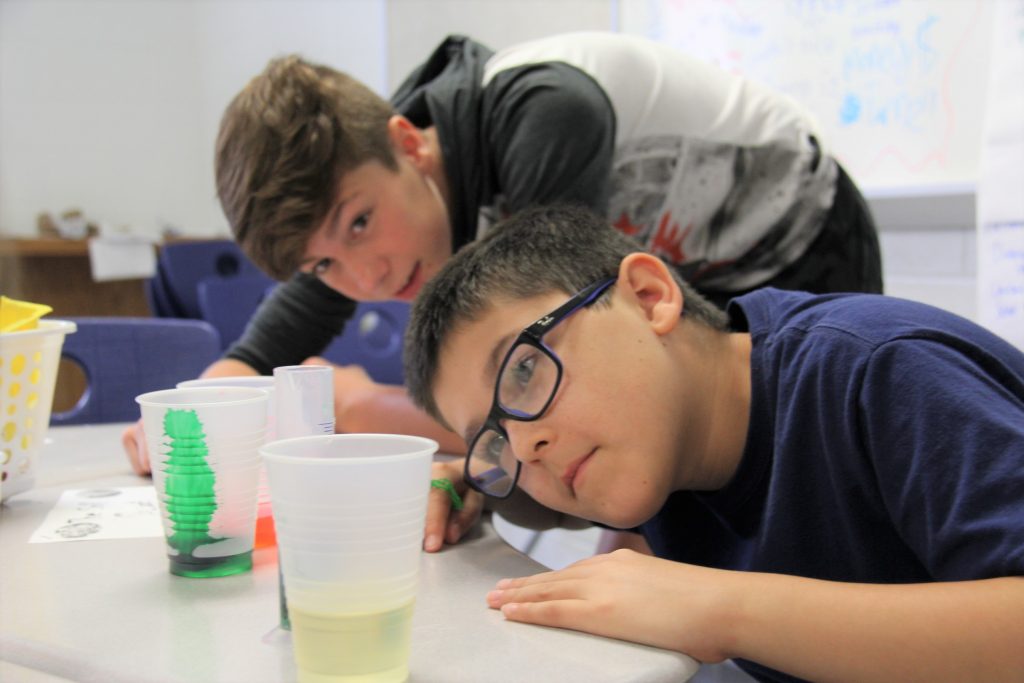 This particular class, dubbed “SMATH,” is one of four strands offered. Other classes are engineering/product development, coding and robotics, and literacy and technology.

“They are using their hands. They are working collaboratively with other students in other groups. They are learning through doing,” she added.

According to students, that’s part of the appeal of this three-week camp.

“I think it’s fun that we can build with our hands,” said Bayside Middle School rising eighth-grader Gabrielle Williams. She was building a small vehicular robot with four female classmates. 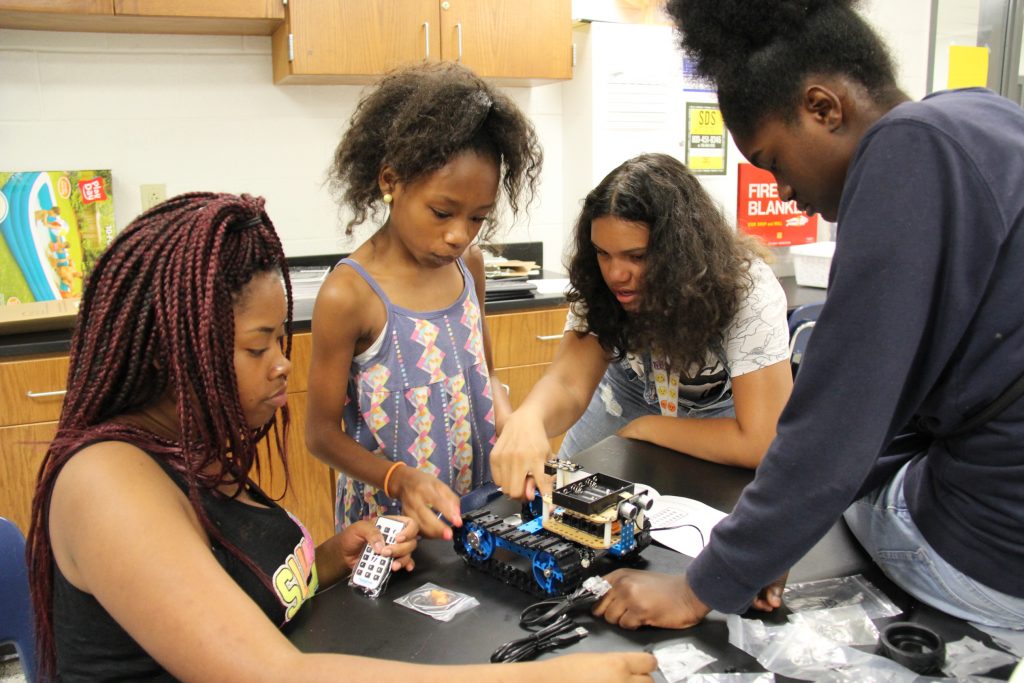 Tablemate Kristal Willoughby, a rising seventh-grader at Bayside Middle School, said that she had never had the opportunity to assemble robots before.

“You have to wire stuff,” she stated. “You have to put stuff together and usually I don’t build stuff. It comes built or my parents do it. I have helped, but I have never built something on my own from scratch.”

Next door, rising sixth-grader Brooke Nicholas, who aspires to be a nurse practitioner, realizes the importance of the skills they are learning.

“A nurse practitioner needs to know science,” Nicholas said. She was in the midst of assembling a boat capable of sustaining the most possible marbles while in water. “The project is not necessarily about building a boat, but about problem solving.” 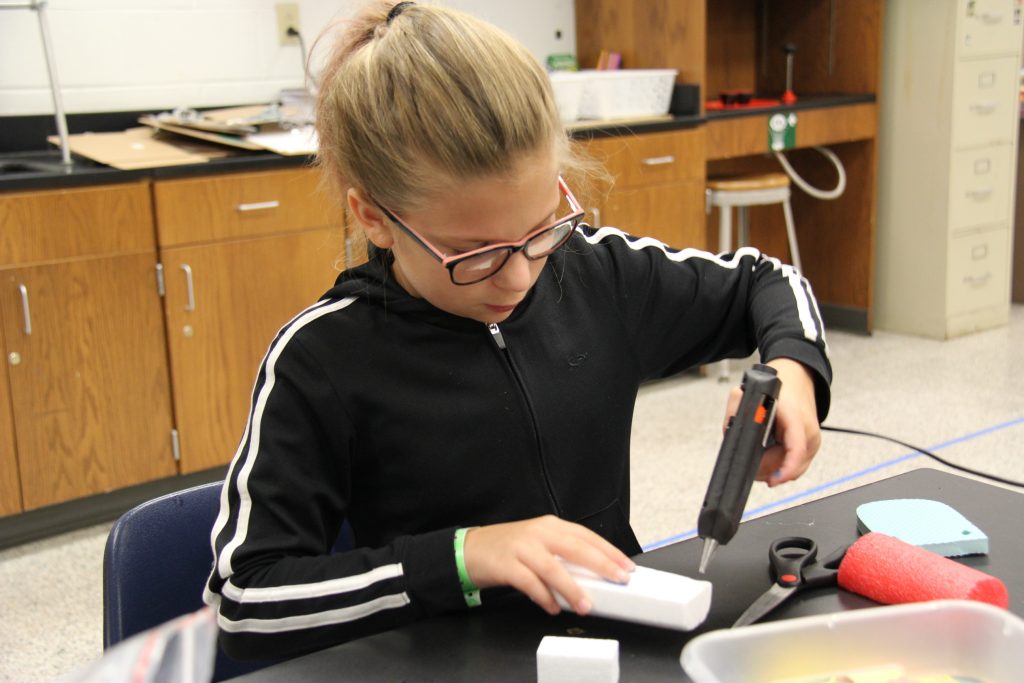 Back in the SMATH class where students were measuring solvents to determine which methods would best solve the oil spill problem, rising eight-graders Aidan Bubb and Hiba Aslam concurred with Nicholas’ assessment.

“It shows us life skills and it’s a fun experiment that we can do,” Bubb shared.

“I get to work with things I haven’t seen before and I have a better understanding of them.”

“Students are learning how to program their Sphero robots to do movements and actions by using block coding,” Griffon said. “Once they code the blocks, they hit a button and a separate window opens which shows them JavaScript.” 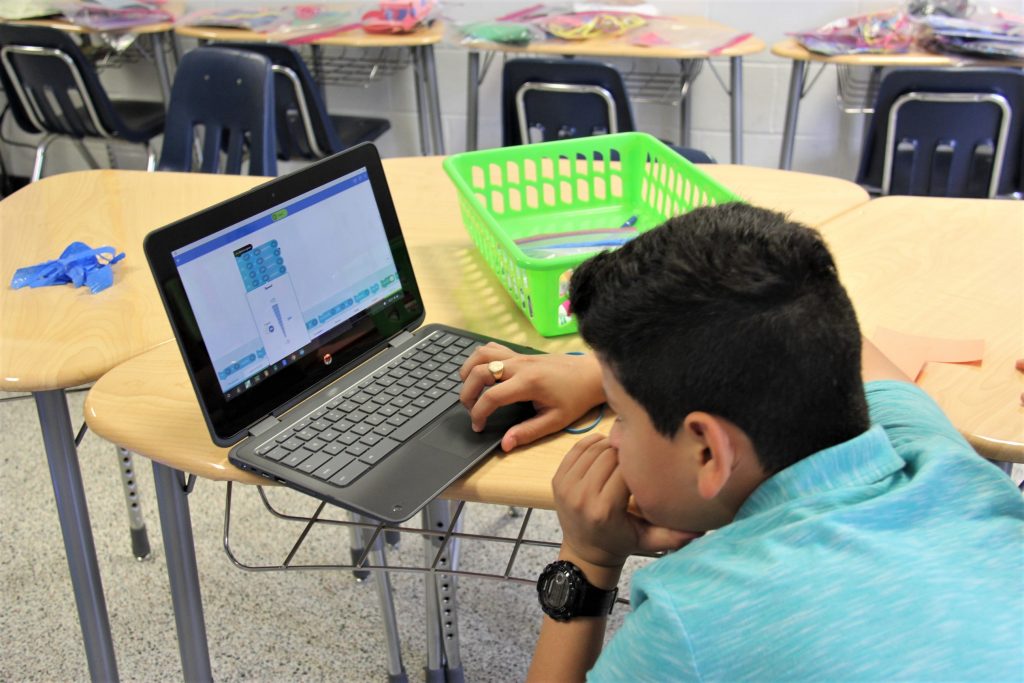 According to Griffon, being able to see JavaScript familiarizes students with HTML, the web programming language known as coding.

“Slowly, they can learn to write out code,” Griffon stated. “It’s another way of thinking about writing and reading. Language is all coded. It’s symbolic.” He adds that his hope is that this activity sparks students’ interest in technology jobs.

“It’s our inaugural year of the camp and we’ve made science, technology, engineering and even literacy a part of every day to make students more inquisitive about solving everyday problems,” said co-onsite coordinator Jennifer Morris, who is a literacy coach at Bayside Middle School during the school year.

To ramp up the excitement right from the start, the 50 enrolled students went on three field trips during the camp’s first week. They went to the Virginia Beach Technical and Career Education Center so students could see the multiple academic pathways the school division offers; to iFly where they learned about the math and science behind flying; and to Mount Trashmore where they made kites out of recyclable materials. 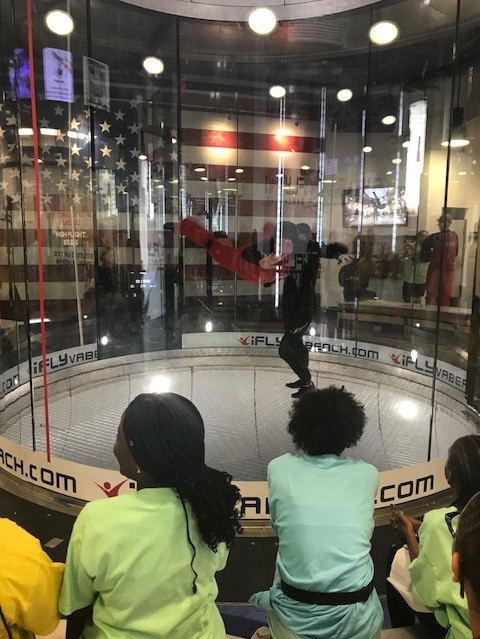 “Students came back really excited about what they are going to continue to do,” Morris said about the field trips, which correlate to the camp’s different weekly themes: air for the first week; ocean and water for week two; and space and land as the theme for the final week.

Meanwhile, back in the SMATH class, teachers indicate that the weekly instructional themes were the inspiration for the oil spill problem-solving lesson.

“We did an overarching problem: a plane crash,” said Kempsville Middle School gifted resource teacher Heidi Yeager who is teaching the SMATH class with Bayside Middle School math specialist Howie Hodapp. That first week, SMATH students concentrated on math calculations to determine how far the plane had to fly.

“This week, their job is to try to get the oil out,” Yeager said. “But before we do that, we are doing experiments so they can understand density and whether that is going to impact their decisions regarding what method they are going to use for the cleanup.”

In addition, students were also using Chromebooks to read online material to become subject-matter experts in a specific oil clean-up method that they could then share with classmates.

For the final week of the camp, SMATH students will be completing several math calculations to design a pulley that could extract the hypothetical airplane from the water.

“We want to make sure that students stay curious all the time and that they are able to problem solve for the 21st century,” Morris stated. “We’ve already had teachers, parents and students tell us, ‘We’re excited and want to be part of this camp next year.’”