“Where is an animal’s heart? The same place as ours?” Kathy Shambo asked the rising fourth-graders gathered in front of her.

“Where do you put your hand for the Pledge of Allegiance?” Shambo, Virginia Beach SPCA humane education director, prompted. “That’s right. That’s where your heart is, and it’s the same place for an animal.”

Shambo was prepping students for what was to come next – using stethoscopes to listen to the heartbeats of a kitten, dog and rabbit (also known as Frieda, Scrappy and Pepper) from the SPCA.

But first, the students each had to make a prediction about who would have the fastest heartbeat: the student, Frieda, Scrappy or Pepper.

Rising fourth-grader Jett’s eyes grew wide as he heard the heartbeat of Pepper the rabbit through the ear tips of his stethoscope. He had predicted it would be the fastest heartbeat of all the choices. 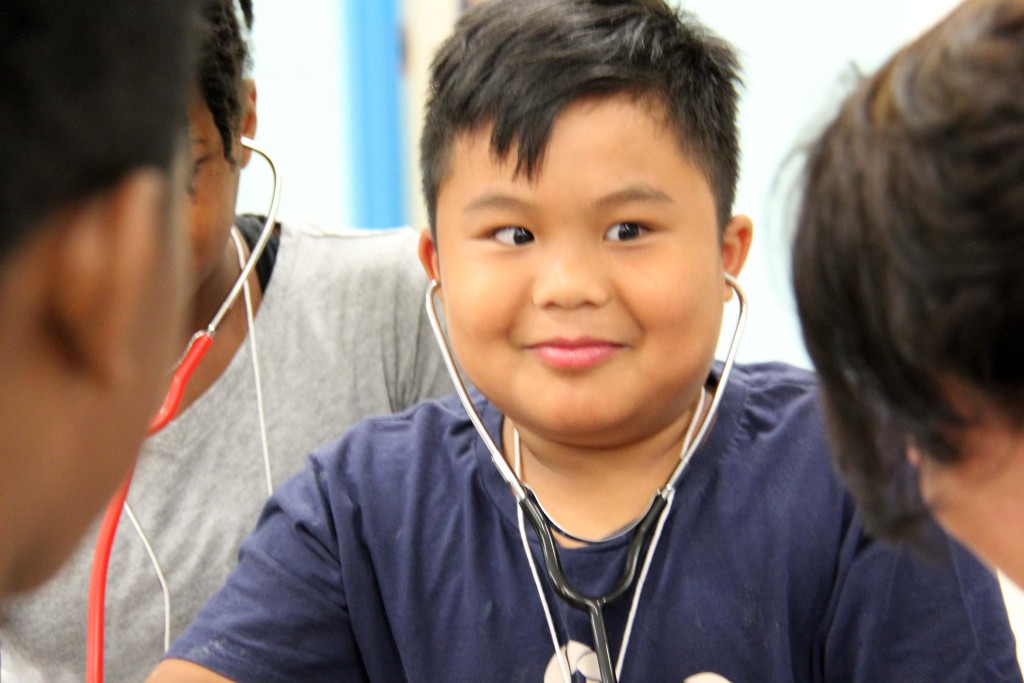 “Mine was definitely slower than the rabbit’s heartbeat. The rabbit’s was VERY fast,” said Jett.

Students clamored to offer reasons why: They run so fast. They are smaller than us. They get lots of exercise.

Shambo’s visit from the SPCA is just one of many activities Jett and his fellow group members are experiencing in Rosemont Elementary’s Summer Jam program. The program is open to rising third-, fourth- and fifth-graders at the school, and, according to program director Laura Silverman, Rosemont began offering the program three years ago to minimize summer learning loss.

“Summer Jam was created to help address this issue while fostering a fun and engaging learning environment. It is not summer school, nor is it summer camp, but rather something in the middle because it has the best of both worlds,” said Silverman.

She added, “The program exposes our students to new and exciting enrichment activities and presentations that address the ‘whole child.’ Our children are given the opportunity to create meaningful memories that they can connect to new learning that takes place throughout the summer and in future academic years.”

“It’s really fun, and there are lots of animals,” rising fourth-grader Joseph said of his Summer Jam experience thus far.

Visits from special guests, volunteers and program partners, such as JB Rattles, SPCA, Museum of Contemporary Art, Mad Science, Krendl the Magician, New Jerusalem Ministries and the Virginia Beach Public Library, are only one component of program.

Summer Jam attendees receive daily classroom instruction in reading, writing and math. Regular visits to the school library are another critical piece of the program.

Hawletta Newsome, a three-year Summer Jam volunteer from New Jerusalem Ministries and retired educator, serves as a buddy reader in the library. What are her observations after three years with the program?

“The students have consistency and a continuation of their education, and it helps beat the summer slide,” said Newsome. She also noted the students’ enthusiasm for reading and logging their books for the Virginia Beach Public Library’s Summer Reading Challenge.

All Summer Jam attendees participate in the library’s challenge giving them the opportunity to earn free books and other incentives.

Visiting the school library is Nyjeria’s favorite. The rising fourth-grader loves to read, and the long list of books she already has logged in the public library’s reading challenge proves it.

“Summer Jam helps you learn and get ready for fourth grade,” said Nyjeria.

Silverman agrees, based on data she has monitored since the program’s first year.

“[The] results show that students who participate in the program have greater rates of maintaining or improving reading levels when compared to students who did not participate,” Silverman said.

She also noted that “an unforeseen result of the program is the positive culture it has created. Students, parents and community members have come to rely on the program. Summer Jam has opened up doors for children to see that learning can be exciting, and it has contributed to making school a place where our students and staff members want to be.”

It also has made Rosemont a place where former students want to return.

“I just love this school,” said Kanaan, who attended Rosemont and is now serving as a Summer Jam student volunteer.

“The experiments, the field trips and the friends” are what Kanaan fondly recalled of his own Summer Jam experience. Now, he is preparing to be a sixth-grader at Larkspur Middle School.

“Many of our students who have moved on to middle school the past couple of years have voiced disappointment in not being able to participate,” Silverman explained. So she started a student intern program this year to which Rosemont “graduates” could apply to volunteer their time to support Summer Jam.

Joining Kanaan as volunteers are Taiyanna and Averyana, who are also Larkspur Middle rising sixth-graders.

“One reason I wanted to help is because my sister is a rising fourth-grader here at Summer Jam and because I like to help out,” said Taiyanna, who did not attend the program herself.

Averyana, who also has a sibling at Rosemont, echoed that she likes “to help other people.” When asked about her Summer Jam experience as a student, she remarked, “This year is even better,” citing that day’s visit from the SPCA and two other planned field trips.

“Their participation provides them the opportunity to be role models to younger students, give back to the school that educated them, build citizenship skills and cultivate their own passions to benefit others,” Silverman said. “Not only do they help with the logistics of the program, but they also serve as buddy readers in the library and facilitate stations for many different enrichment activities. Often, they create activities that they facilitate which allows them to have ownership of what they contribute.”

Summer Jam intern and rising sixth-grader Trevon incorporated one of his passions, basketball, in an activity for a math field day held in the gym. He called out multiplication facts for solving and the opportunity to shoot a basket, while other stations included a bean bag toss, hopscotch and relay race with math facts to solve for every hop, skip and jump.

Trevon, who was also a member of Rosemont’s Boys’ Club, has three younger siblings attending Summer Jam. “I thought it would be a fun experience,” he explained of his desire to volunteer. “I like helping out instead of playing around, and I like to try new things.”

Is he excited about the transition to middle school?

With an emphatic affirmative head nod, he replied, “I want to meet new people and get a good education.” He also noted with enthusiasm and pride his perfect SOL score in one subject and a near perfect score in another. Rosemont seems to have prepared him well.

With that, Trevon shot a nothing-but-net basket and prepared multiplication facts for the next group of Summer Jam participants headed to his station. 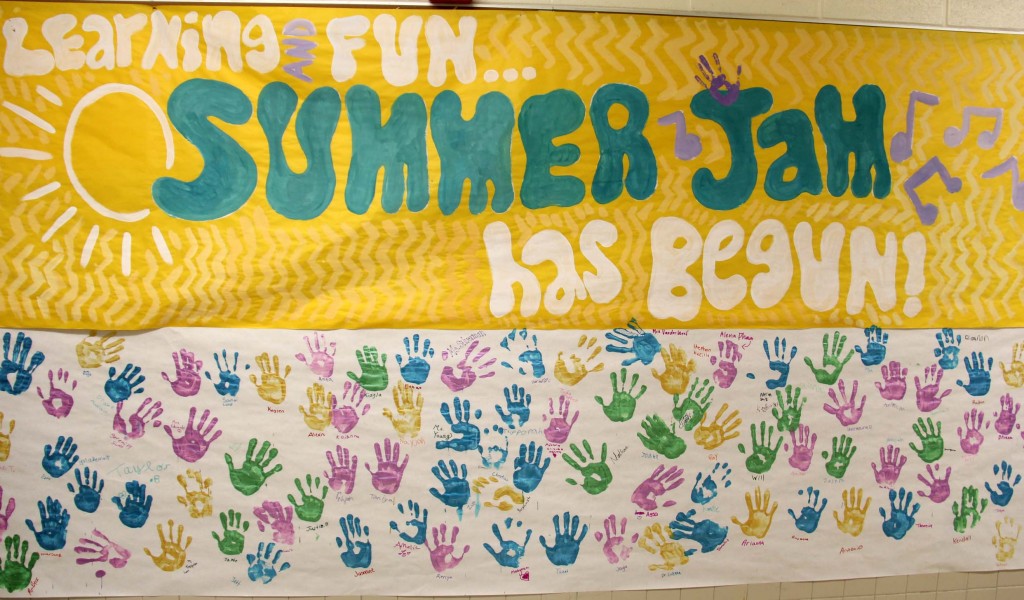