The gym floors from the former Princess Anne Middle School (PAMS) are getting a new lease on life, and so is school bus 914, which was scheduled to be taken out of service.

Over the next year, the students at Old Donation School, as part of their capstone projects, will be giving these materials a fresh start by re-purposing those materials and creating an Eco Bus.

“The goal is to convert the bus into this traveling exhibit that could go to different schools and show not only what we’re doing in terms of sustainability, but what other folks are doing,” said the division’s sustainability officer Tim Cole.

The concept originated when Old Donation School (ODS) Principal Kelly Hedrick read a blog about people across the country converting old buses in to classrooms. Her teachers loved the idea and ODS civics teacher Jared Fritzinger jumped on board for a very special reason.

“When I was a kid my father built the house that we lived in and I didn’t know anything about it,” Fritzinger said. “I want students have a school experience that’s not just classroom-based. I want the students to get the pleasure of designing something, working with their hands, building something that they had a hand in and learning skills that they might not normally get as part of the normal school experience every day. That’s really important to me.”

With Fritzinger now involved, Hedrick approached Cole who wholeheartedly supported the idea. He asked the school division’s Office of Transportation and Fleet Management Services if they had a bus that was going out of service. The answer was yes. He then contacted the Office Facilities Services about re-purposing the planks from the former PAMS to serve as the flooring on the bus. The answer again was yes. And when Fritzinger reached out to the Technical and Career Education (TCE) teacher Wayne Champigny to see if his students could help convert the diesel engine into one that runs on vegetable oil, they too were willing to help.

When ODS students heard about the project, they shared the same excitement.

“I was like, ‘that sounds amazing and I really have to work on that,’” said ODS eighth-grader Arianna Lawton. “Sustainability is good for our future and we can help students learn more about it.”

That enthusiasm prompted several ODS students to join Fritzinger Nov. 6 to prep the wood and remove all of the seats from bus 914 in one day. 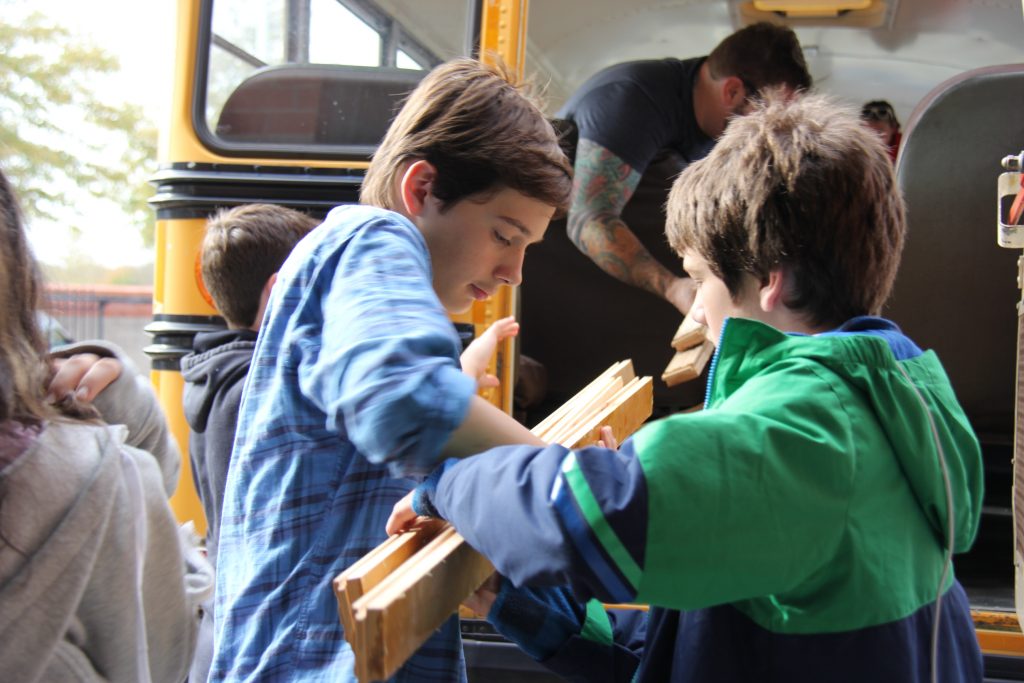 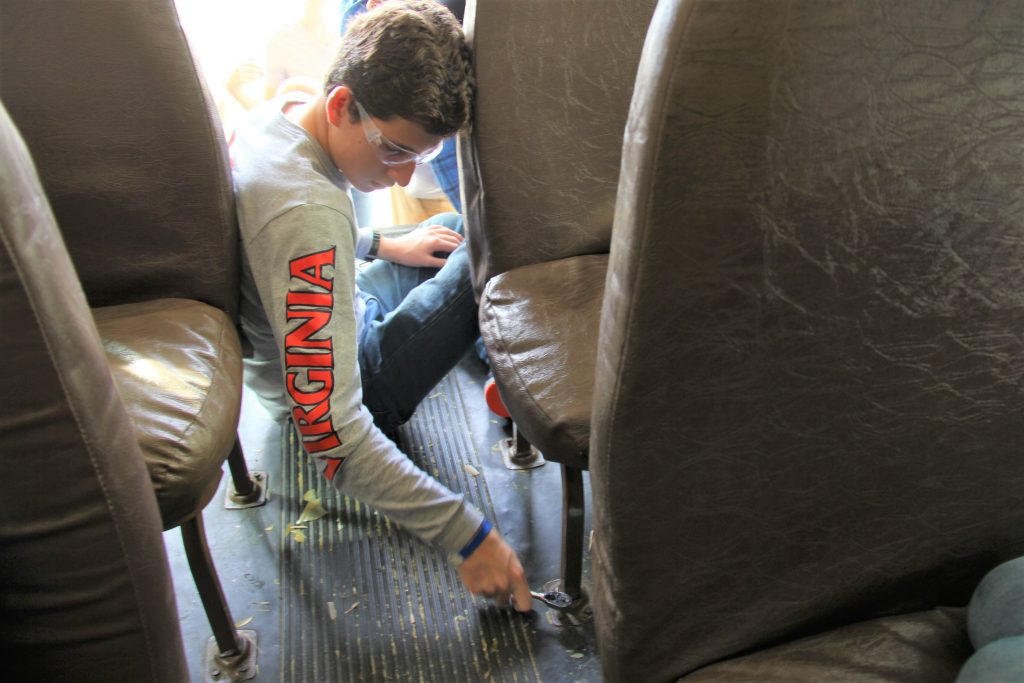 Eighth-grader Roman Perrine, who volunteered that day, is certain their work will have a positive effect.

“We get to convert something that would be thrown in the garbage and convert it to something that is used for a better purpose,” he said. “I just think it’s cool to do something to really help the environment.” 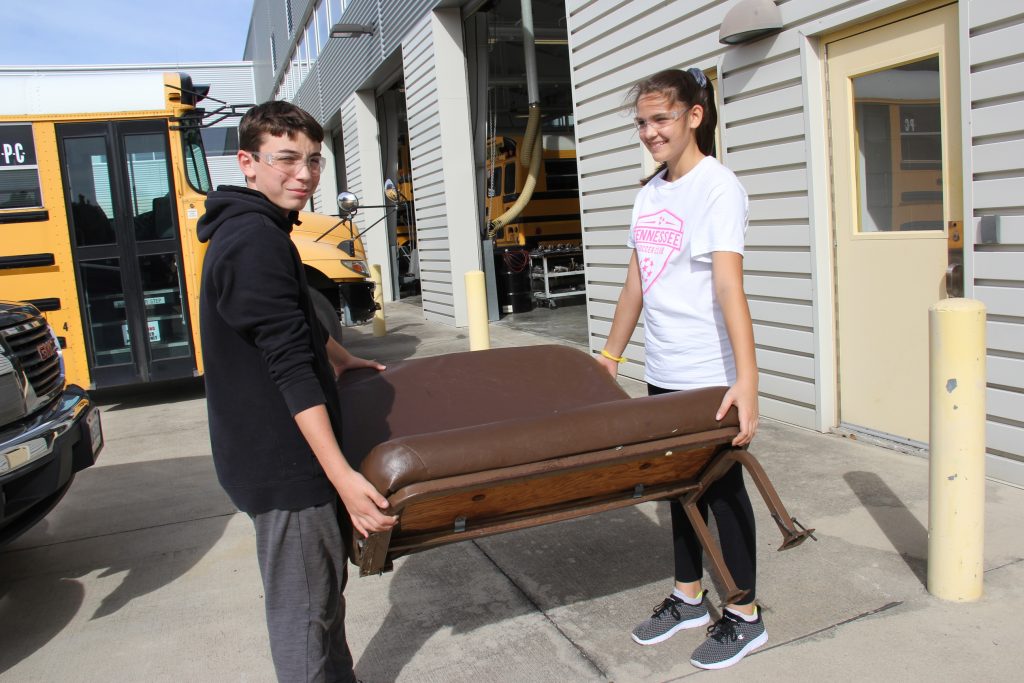 Students are now in the initial stages of forming capstone groups, where eighth-graders work in teams of three or four students to identify a community need and then create a project that helps fill the gap.

“As the year progresses, we are going to work on the interior design with the curriculum group and try to put the whole package together as we look for funding and materials sources,” according to Fritzinger.

When asked about what they need, Fritzinger indicated that anything that is reusable or sustainable – like cabinetry. But perhaps most importantly, he added, they need professionals who know how to install items.

“We received grant funding and got a projector and a screen for the inside of the bus,” Fritzinger said. “We also have a solar panel and I have to figure out how to put a solar panel on a bus. So knowledge, materials, labor, support – those are the things that are really going to be the most helpful to us.”

For Cole, when the bus is finished it will be more than a bus about sustainability.

“The idea is to build this bus so that students can see how they can lead by example,” he explained. “These are the things that everyone can do. We want people in all of their daily decision-making processes to balance social, economic and environmental outcomes. It’s the triple bottom line that we talk about and it’s important because students today are going to eventually be the CEOs and decision makers. All of these issues around sustainability are the biggest issues that this generation will face.”

Read more about the school division’s three sustainability goals and the difference students and staff are making by visiting vbschools.com.