Waiting for the school division’s 12th annual Diversity Ambassadors Workshop to begin July 19, first-time attendees admitted they weren’t sure what to expect, but they certainly demonstrated the right mindset from the start.

“I was just curious about it. I thought I would try it,” said Max Kallweit, a rising seventh-grader at Great Neck Middle School. “Everybody can be lonely in their life and everybody should have a friend. People should not hate.”

Fellow Great Neck student, Ignacio “Nacho” Lopez, a rising eighth-grader who is a native of Spain, added “There are different people in the world and you have to know everybody else’s world.” 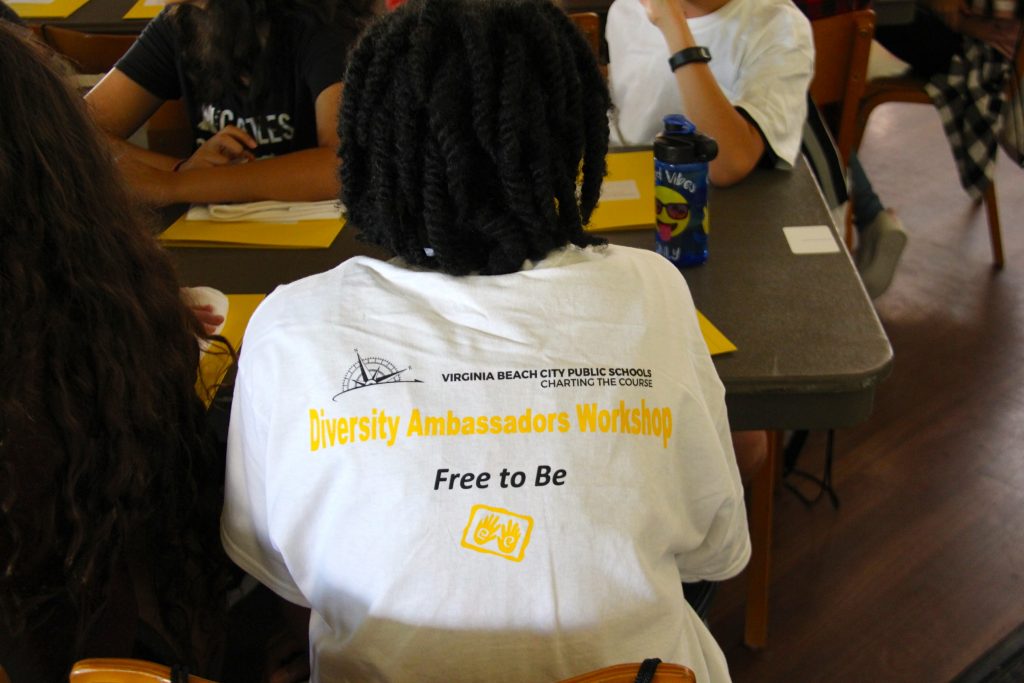 “I was recommended to attend,” said Thomas, a rising sophomore. “I thought it would be a good opportunity so I just came to see what it was about.”

“I just came to learn…to gain knowledge,” said McArtis, a rising senior. “It seems like, in today’s society, a lot of people are discriminated against still and we just need to find a way to change it – to problem solve.”

McArtis already had some thoughts on how to do that at her home school: “Just accept everyone for how they are. Don’t discriminate. Don’t be rude to people. Get to know people.”

Getting to know new people was the first activity Susan James, chief administrative officer at Tidewater Community College (TCC), had planned for the 152 secondary students and 31 adult advisers gathered in the Boyd Dining Center at Virginia Wesleyan University.

She asked participants to share their thoughts about a photo of students sitting next to each other in two classrooms with the title: So Close, But Yet, So Far! 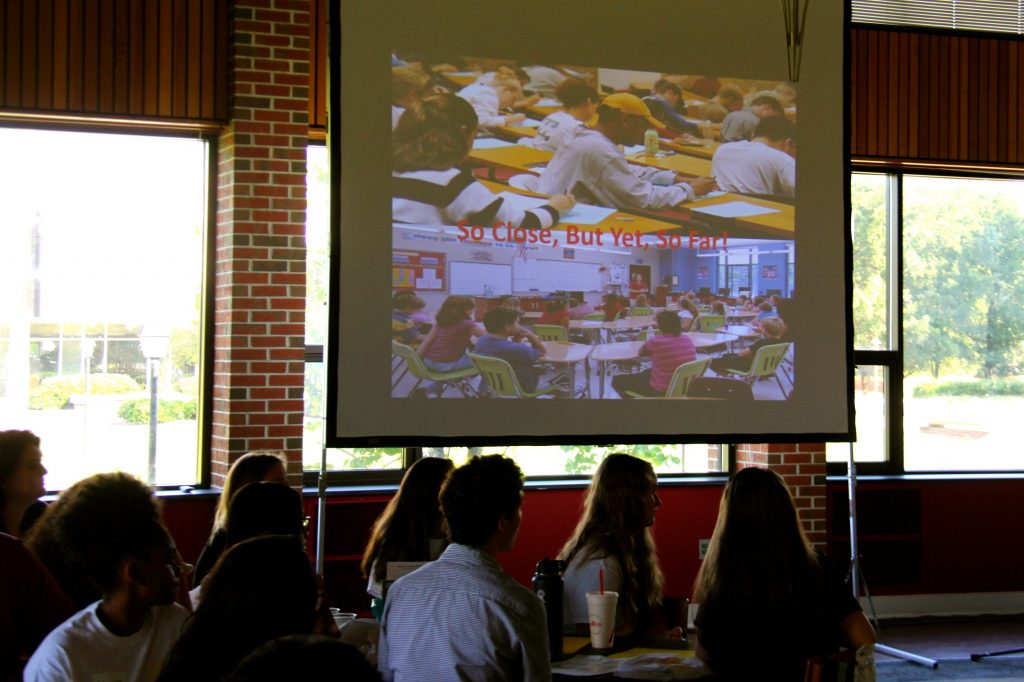 “Isn’t it amazing how we all look at the same situation or picture but we all have different perspectives?” suggested James before offering her own thoughts.

“Here’s what I think is going on. We have students, similar to you, in different classes. Every day you go to class and you probably sit next to same one or two people you know. Guilty?”

“Diversity without inclusion will not work – so close but yet so far,” said James. “Here’s what we’re going to do. Each table appears to have six to eight people. I need half of you to move to the table to your left. Take your things with you and it starts right now.”

After the massive shuffling was complete James asked, “Was that uncomfortable for you to do? Some people are used to the same habits all the time. If you continue with the same habits, you will not get a different outcome. Unless you do something different, you will not enable inclusion. So now I need you to introduce yourself to your new tablemates because you are going to be working with together all day long.” 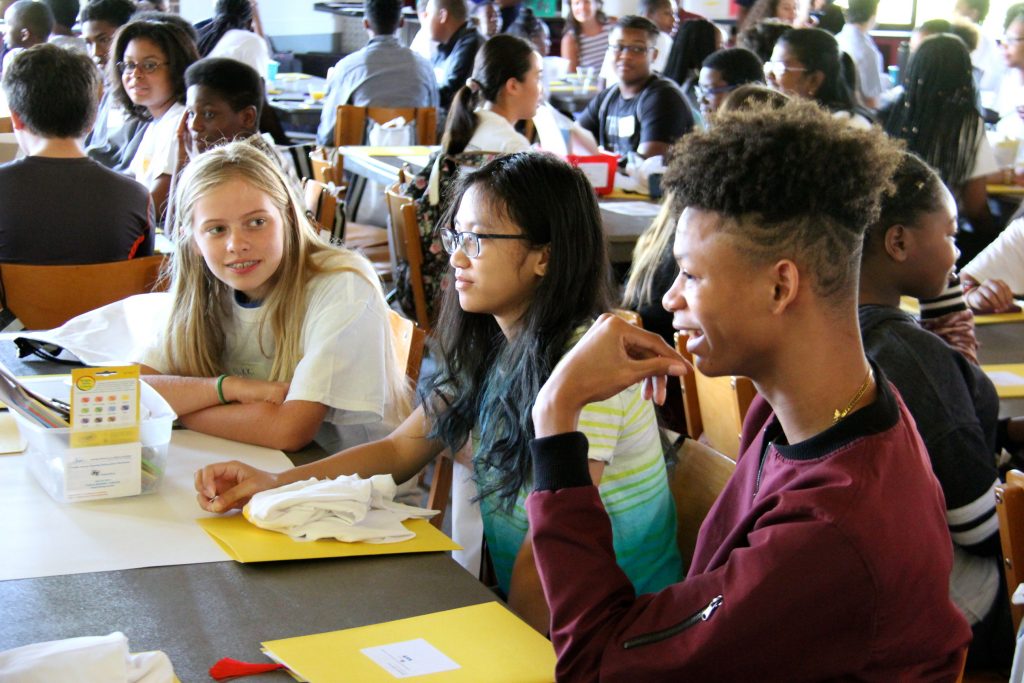 Students shared their names, schools, grade levels and a few laughs before James asked for their attention to continue the day’s activities with her TCC colleagues.

Kyndra Brown, developmental education manager at TCC, explained some rules for “Building Your Community,” an activity in which tablemates would work together to design a building of their choice, such as a hospital or school, using the box of supplies on their own tables.

“You’re going to be identified by your table number,” said Brown. Students also needed to request building permits from her colleague Buffy Ruffin, TCC learning assistance services coordinator, and had to answer questions from adults acting as roaming police officers and other city officials for the activity.

Students and staff got to work discussing designs and construction plans with no knowledge that the odds were already stacked against them based on their table number. 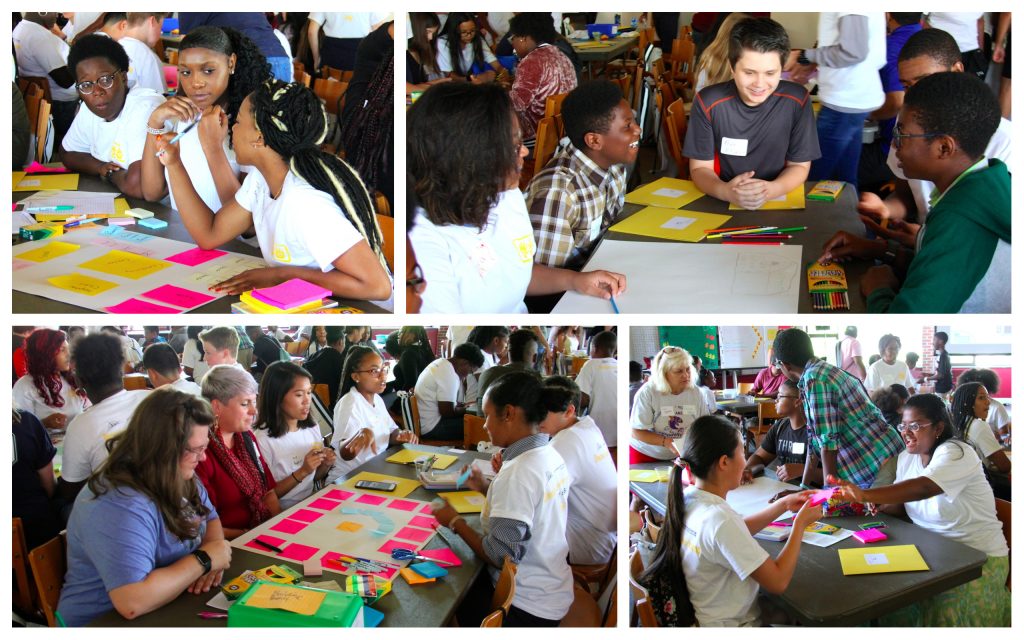 “The privileged group, Table 2, has a lot more supplies. They are not aware,” James disclosed as she watched students work. Table 2 representatives also met less resistance when requesting building permits and when moving about the dining hall to do their work.

What James shared soon became apparent to those involved in the activity. Sitting within inches of each other at tables marked with either “1” or “2,” students heard each other expressing elation or frustration based on their assigned number.

Supplies that were meant to construct buildings became tools for protests throughout the room as students at Table 1 realized they were at a disadvantage and as Table 2 representatives realized their peers were being treated differently. 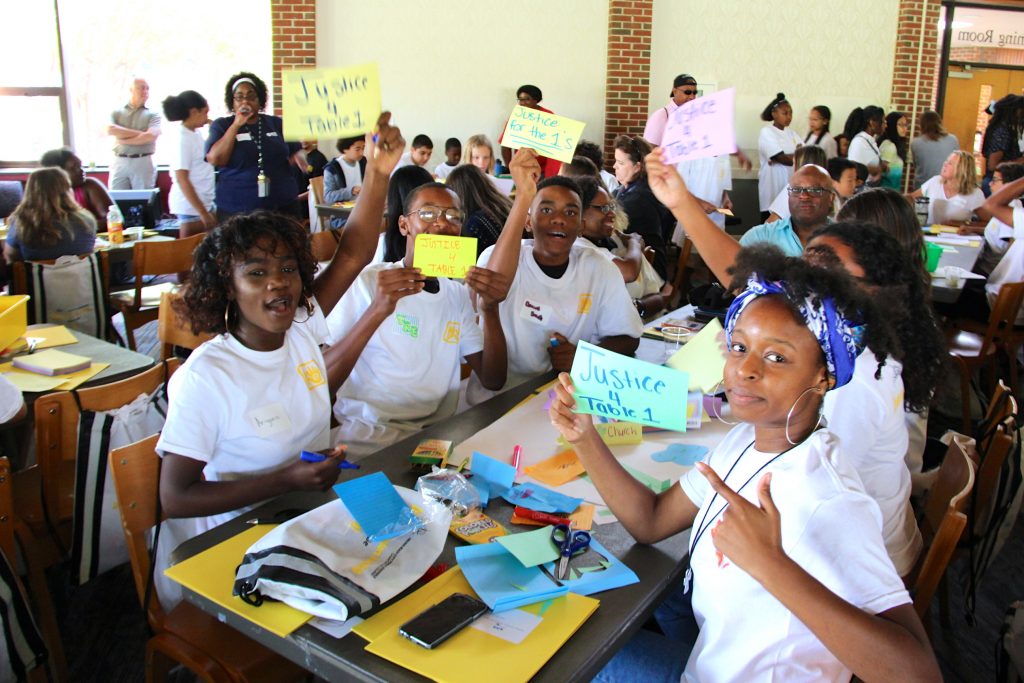 Notecards and Post-it notes were used as signs to call attention to the injustice in their new community. Students and adults at one Table 2 began collecting building permits from other privileged tables to give to a nearby Table 1.

“How did it feel to build your community?” Brown asked workshop attendees after the activity.

“The system was stacked against us,” said a Table 1 student.

“We weren’t giving any opportunity. I was sent to jail three times for just asking a question,” said another Table 1 student.

“Table 2, why did some of you want to stand up and speak out against it?” asked Brown. 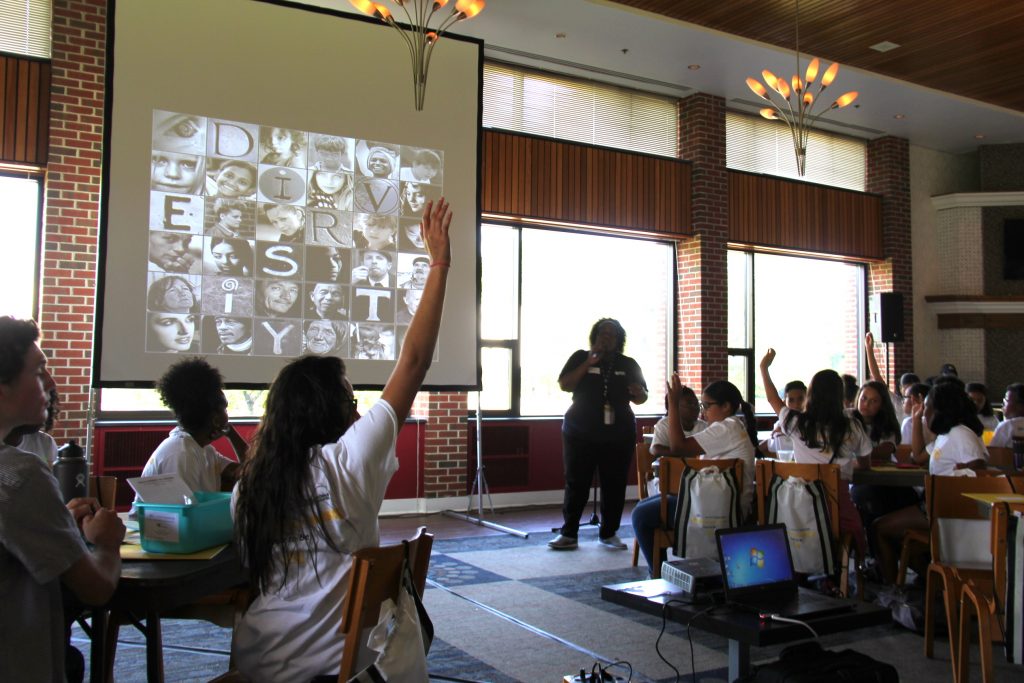 “At first we were enjoying the privilege,” one student shared. “Then I started seeing people going to jail for just talking and I said to my table, ‘We have to do something. This doesn’t make any sense.’”

A second Table 2 student added, “When you do have the privilege, it’s important to use your privilege to stand up for those who don’t have it as opposed to just taking it all for yourself and not doing anything about the injustice.”

Brown agreed and expressed a critical takeaway for the group, “If you have the opportunity to say something and you don’t, you perpetuate what’s going on that’s wrong. Everyone in this room has a voice; we want you to use it in a positive way.”

“We’ll talk about how in some parts of the world they drive on the left-hand side of the street,” James said. “Is that wrong? It’s kind of opening your mind to why it’s important to travel. Because it’s different, doesn’t mean it’s wrong. It just means it’s different.”

They also discussed pre-judging, making assumptions, bullying, being an ally and fostering inclusion. 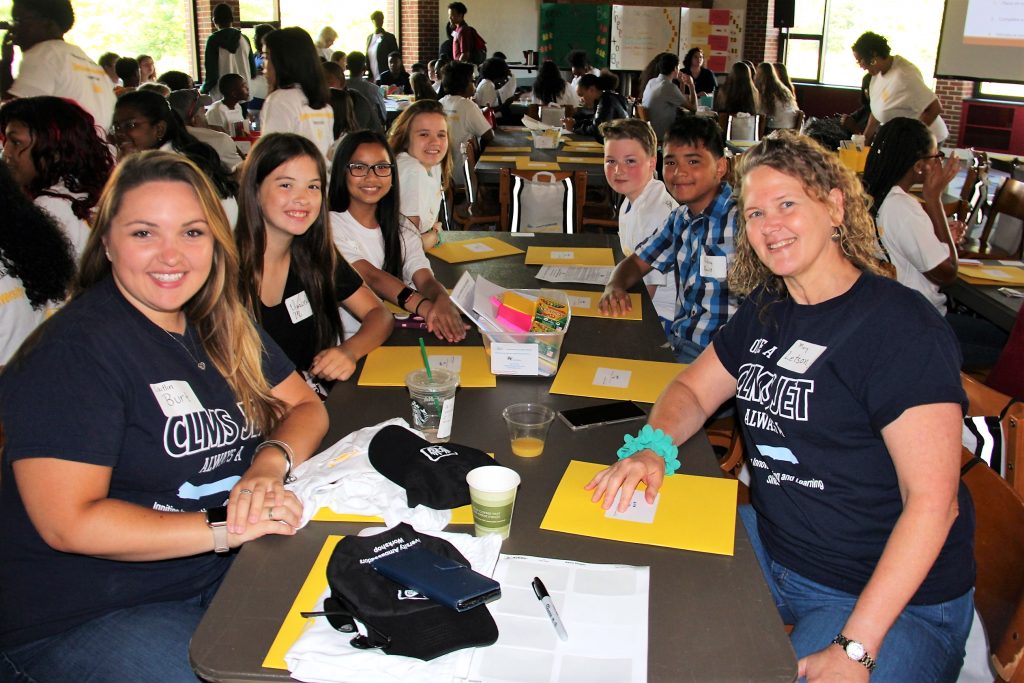 “It empowers the kids,” she said. “They get to do a lot of thinking and they start looking at situations in our own school where they can make a positive change – either in different clubs or the way we run things.”

“Diversity is more than skin color, ethnicity,” continued Letson. “It’s learning differences. It’s are they into sports or fine arts; are they into anime or musical theatre? It takes into consideration all those things because everybody comes from a different past though together they can create a common presence and future for the kids.”

Her CLMS colleague Caitlin Burt agreed. “It is opening a platform to understand that it’s okay to be different. It’s okay to embrace your differences and to share them, and that’s not a bad thing.”

“And we don’t have to change them,” added Letson. “We can appreciate them for who they are.”

They are lessons that Tallwood High School graduates Marissa Goodall and Robert Tillman say they learned serving as diversity ambassadors at their school and from citywide workshops.

“A lot of the world is becoming different, we are very different,” said Goodall, “so it’s important that we start at a young age to make sure that we are aware of diversity.”

“The goal of schooling is to prepare you for the world, not just academically, so this is part of educating people about the world.” said Tillman. “It’s important to recognize people’s differences and not make assumptions. We all have these preconceived ideas about people and here they really try to make you think and look deeper into a person. They are more than just their skin color or how they seem – there is more to them. That’s really what stuck with me.”

Seeing former diversity ambassadors like Goodall and Tillman return to volunteer at the annual workshop is one way Dr. LaQuiche Parrott, director of the school division’s office of opportunity and achievement, knows it’s making a difference.

“Activities like this, workshops like this, are just one opportunity,” said Parrott. “The learning should not stop here of course, but we want to provide that basic knowledge, that basic foundation of what an inclusive community can look like. Then they can go back to their schools and put some of those things in place, even as a student, because I believe our students are the ones who are going to be the change agents that we want to see in the world.”