Business Park Drive, a winding road near Topgolf Virginia Beach and I-264, is home to various businesses and organizations, all with fairly nondescript building facades.

The following day, Wilms expected more than a dozen Tallwood student volunteers and staff members along with several neighbors and family members to join her and Welty for a three-day painting process that would be the culmination of her senior research project in the Global Studies and World Languages Academy. 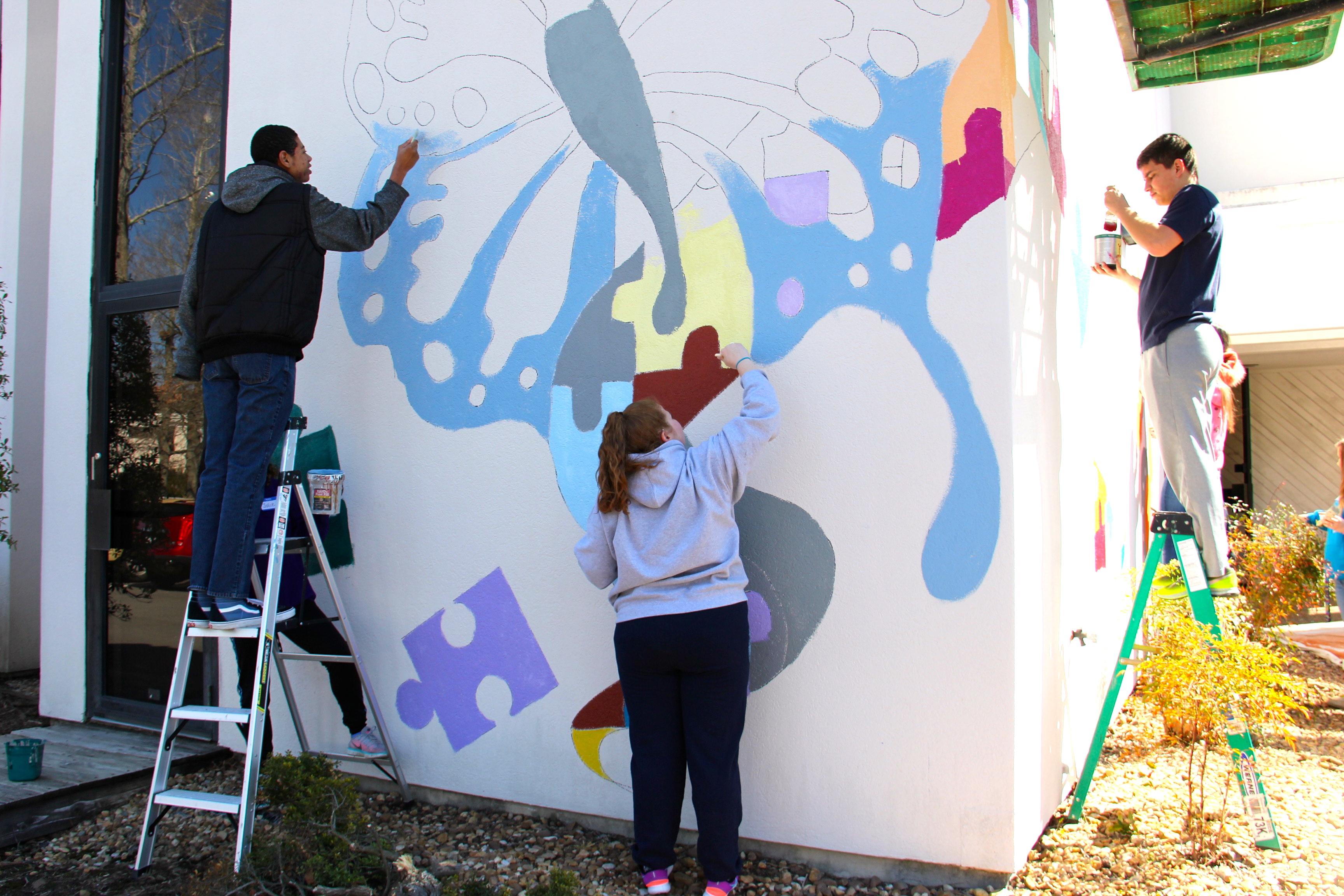 The research project with a complex title – “Local Perspective on How Neurodiversity Supported by Art Therapeutic Practices can Positively Impact Individuals of the Autistic Community on a Global Scale” – has a simple goal for Wilms, building awareness and acceptance.

“I learned that you’re more likely to have a disease or mental illness of some sort than not to,” Wilms said. “That is a huge audience. It is not the neurotypical, as I referred to.

“I explain ‘neurodiversity’ to people as we’re all biologically wired differently which leads to mental illness and all our variations, but that’s a concept that’s OK because we all need to be together and we need to embrace the differences in each other because it is a form of diversity.”

With help from her senior project faculty advisors in Tallwood’s special education and art departments, Wilms recruited students to illustrate her point – literally.

That is exactly Wilms’ hope.

“It is the act of breaking social barriers,” Wilms said. “I had the seven students with disabilities get in groups with one art student and one neurotypical student. I took the first group and I had them focus on these three puzzle pieces and then the next group was to focus on this monarch butterfly. It was a collaboration piece; they would have to figure out how to work with each other despite their differences. I had a lot of people coming up to me saying, ‘Wow, that was really cool.'” 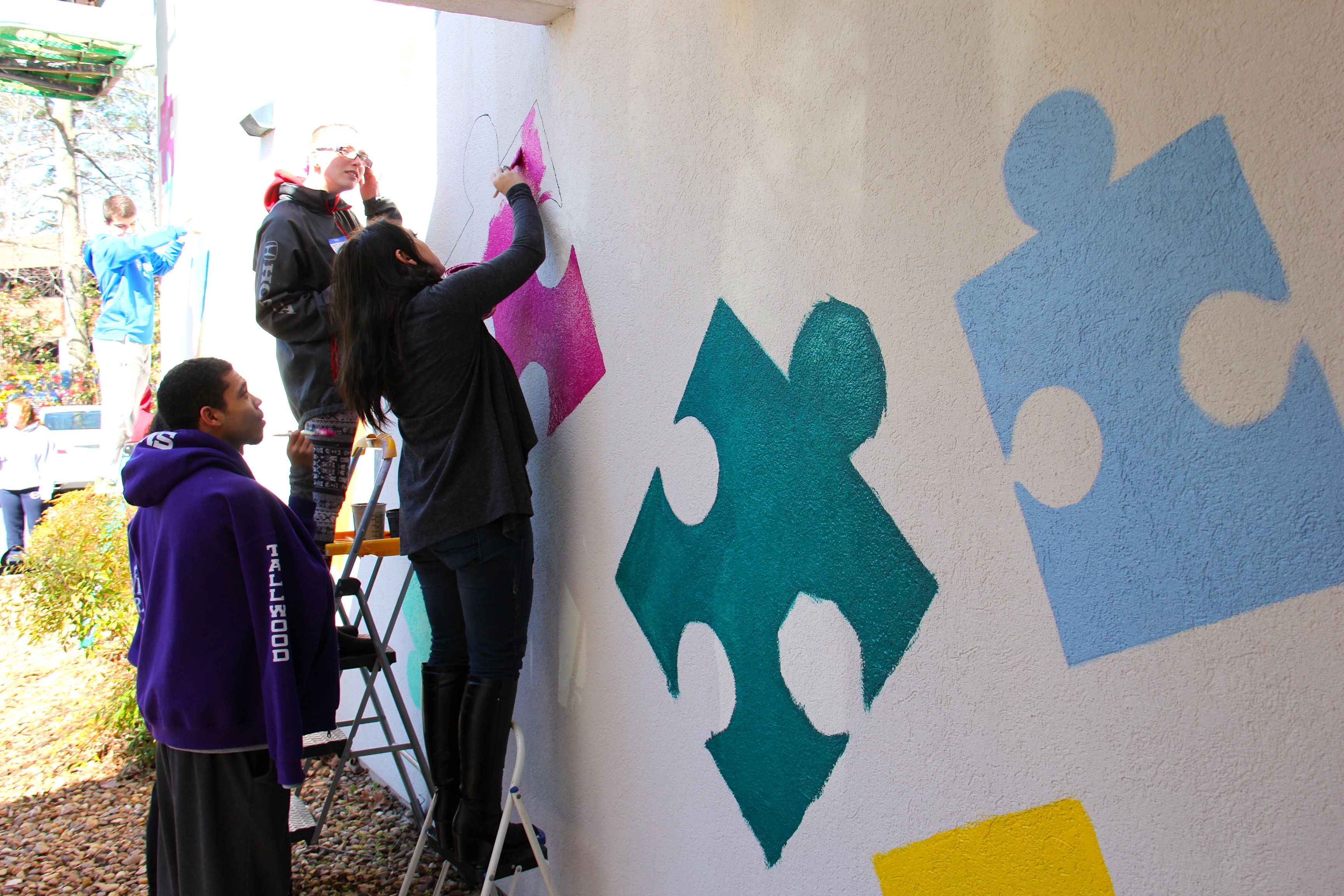 One student with autism, Xander, was particularly engaged with the mural project.

“He had my heart,” said Wilms. “He would come up with his can of paint and say, ‘What do I paint next?’”

Wilms shared it was her own experience with autistic children in her neighborhood that inspired her research project and mural design. She babysat two boys with autism whose mother “was so adamant about her sons’ rights and I thought that was something so beautiful,” said Wilms. It was another neighbor, Penny Morgan, who offered her AERMOR office building as the canvas for the mural when Wilms was turned away by several businesses at the oceanfront.

Wilms credits another invaluable partner, Welty, for responding quickly to her unsolicited email and phone call.

“I was thinking, I need somebody to help me because I’ve never done this before,” recalled Wilms. “I started Googling people and he came up on the top. I clicked his email and wrote a three-page long email, and I called him and I probably left a five-minute voicemail trying to explain what my weird idea was. I had no plan. He called me back the next day and said, ‘I’m in. I’ll do it.’”

Also serving as an artistic mentor to Wilms was Tricia Campbell, her art teacher and a senior project adviser who saw her mural design evolve over time while her focus on success never wavered.

“Shannon acted as a true leader in executing her vision for this project. She was able to engage students and staff and community members in this action for a cause that was a huge impact not only for them but for her,” said Campbell. 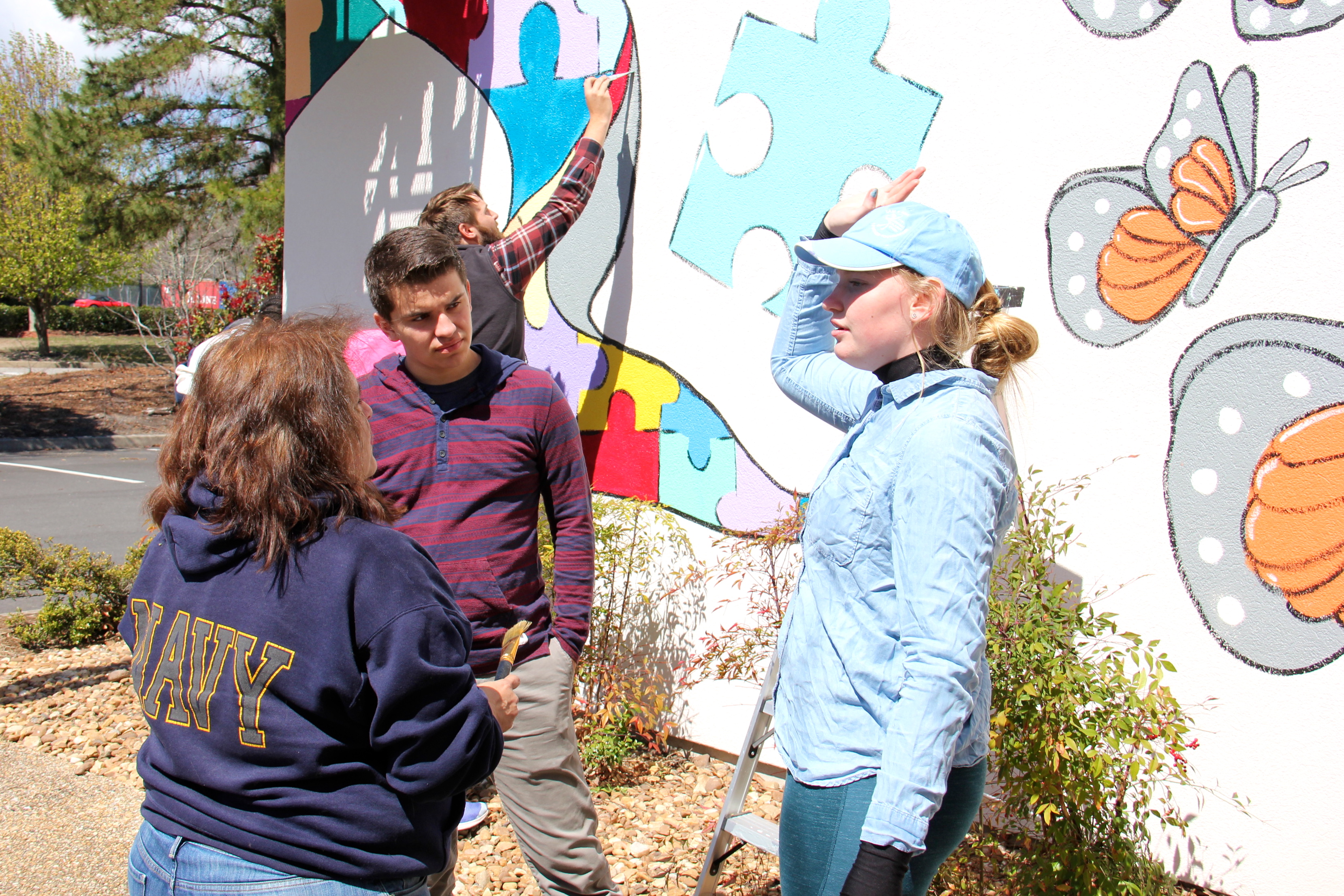 “Art can often speak louder than words and its also a catalyst for conversation,” Campbell added. “She really wanted everyone to have a stake in the artistic process rather than just be viewers of the final product because that’s what allowed them to have the authentic experience: Now I am part of the action rather than just being able to look at the finish piece or interpret it on my own; I’ve actually put a hand in it.”

And Wilms wanted everyone who had a hand in painting the mural to leave their handprints on a wall near the building’s entrance. The prints were transformed into butterflies, which feature prominently on two other walls. 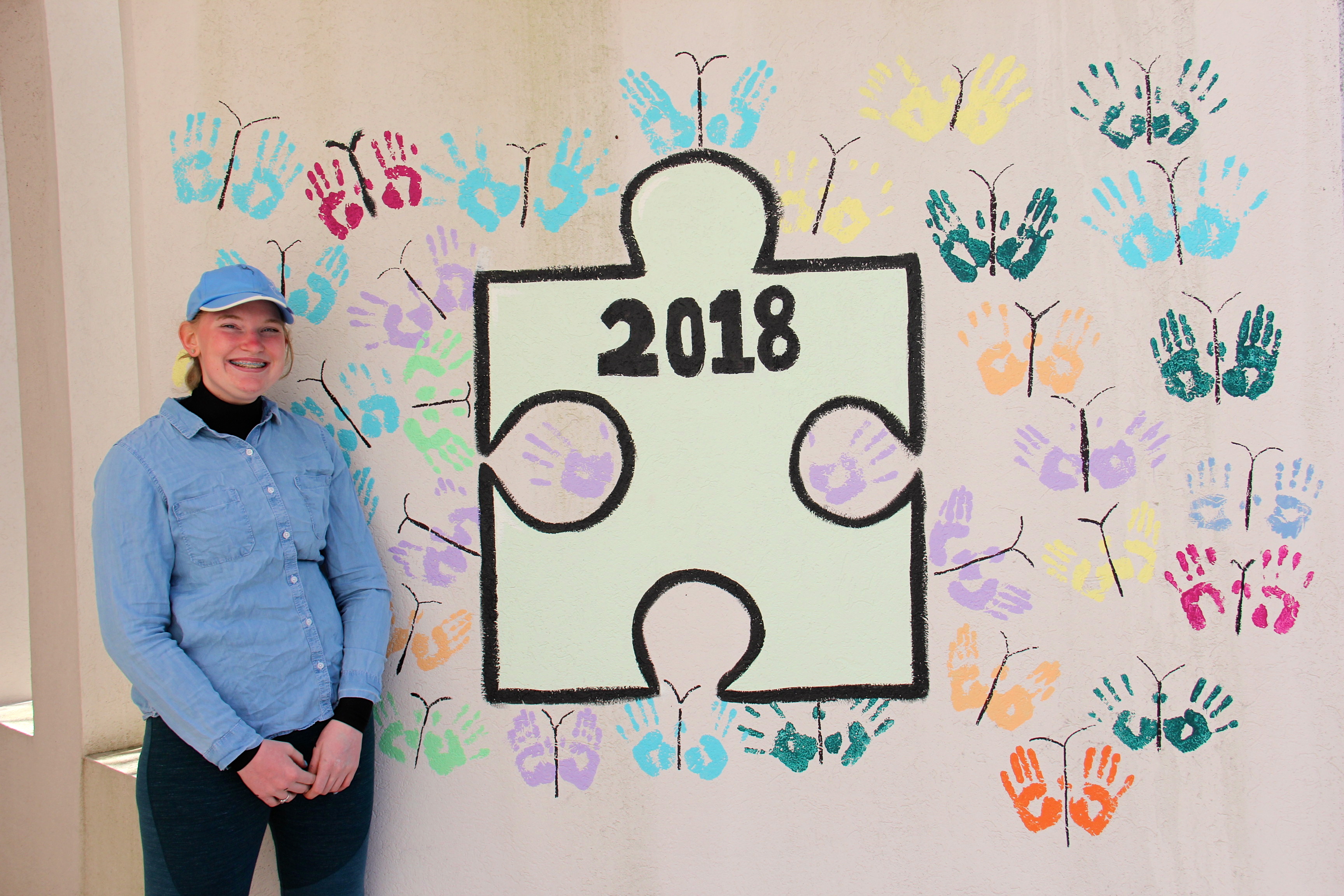 “Everything has symbolism to it,” said Wilms, turning to look at the mural as it neared completion on the third day of painting.

“On the other side is a big butterfly,” continued Wilms, “and it’s this neutral blue color which is something special in and of itself. The butterfly has holes in its wings, which is the idea that it’s broken but it’s still flying. It’s beautiful on its own.” 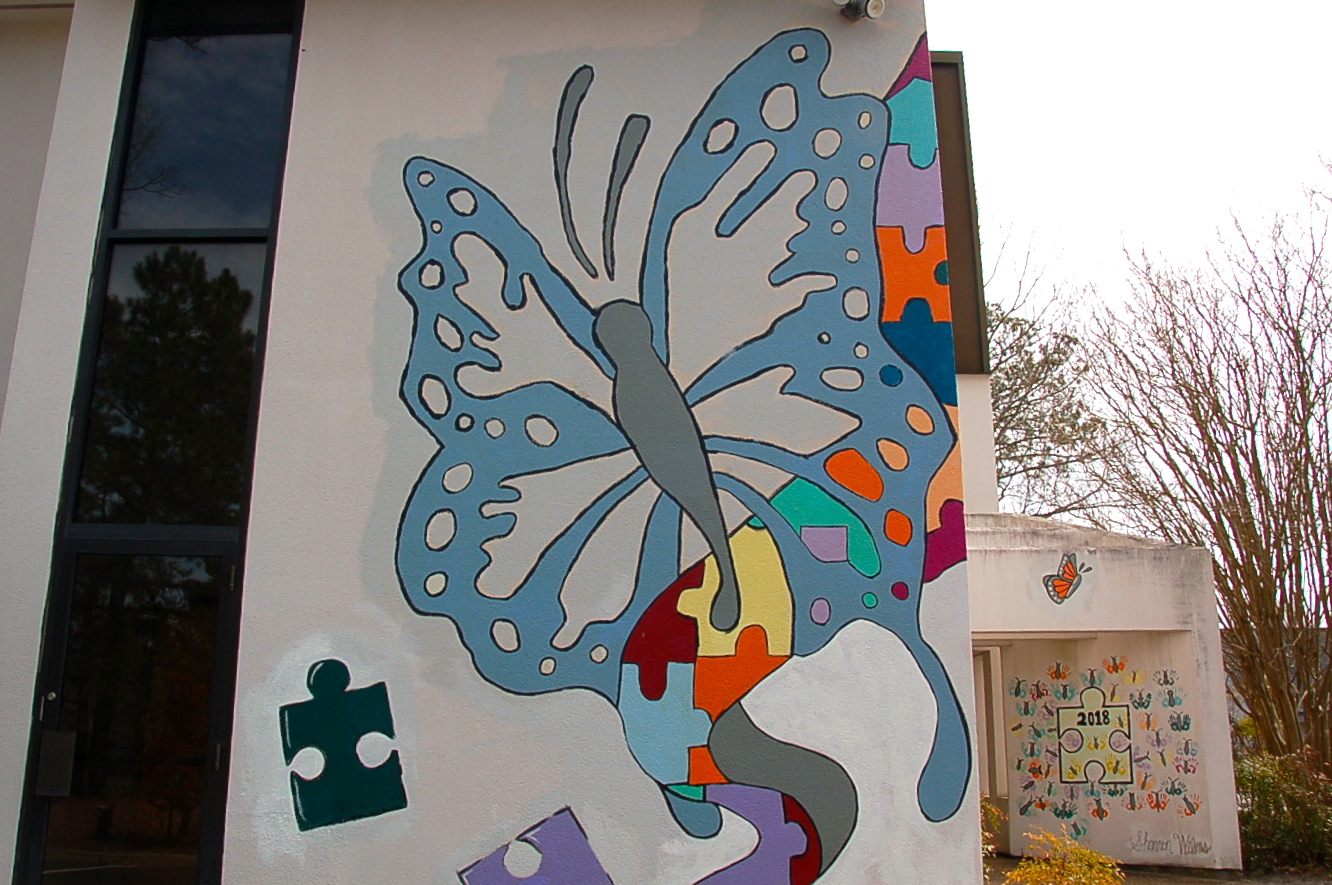 “But you come to this side and you see all these monarch butterflies. My idea was that monarch butterflies are usually the first butterfly people think of and it’s the most recognizable. I did a duplicate of them because they’re supposed to be the society aspect – it’s all these butterflies together flying away from its issue. It’s the idea that we need to meet in the middle, which is where the ribbon stands.” 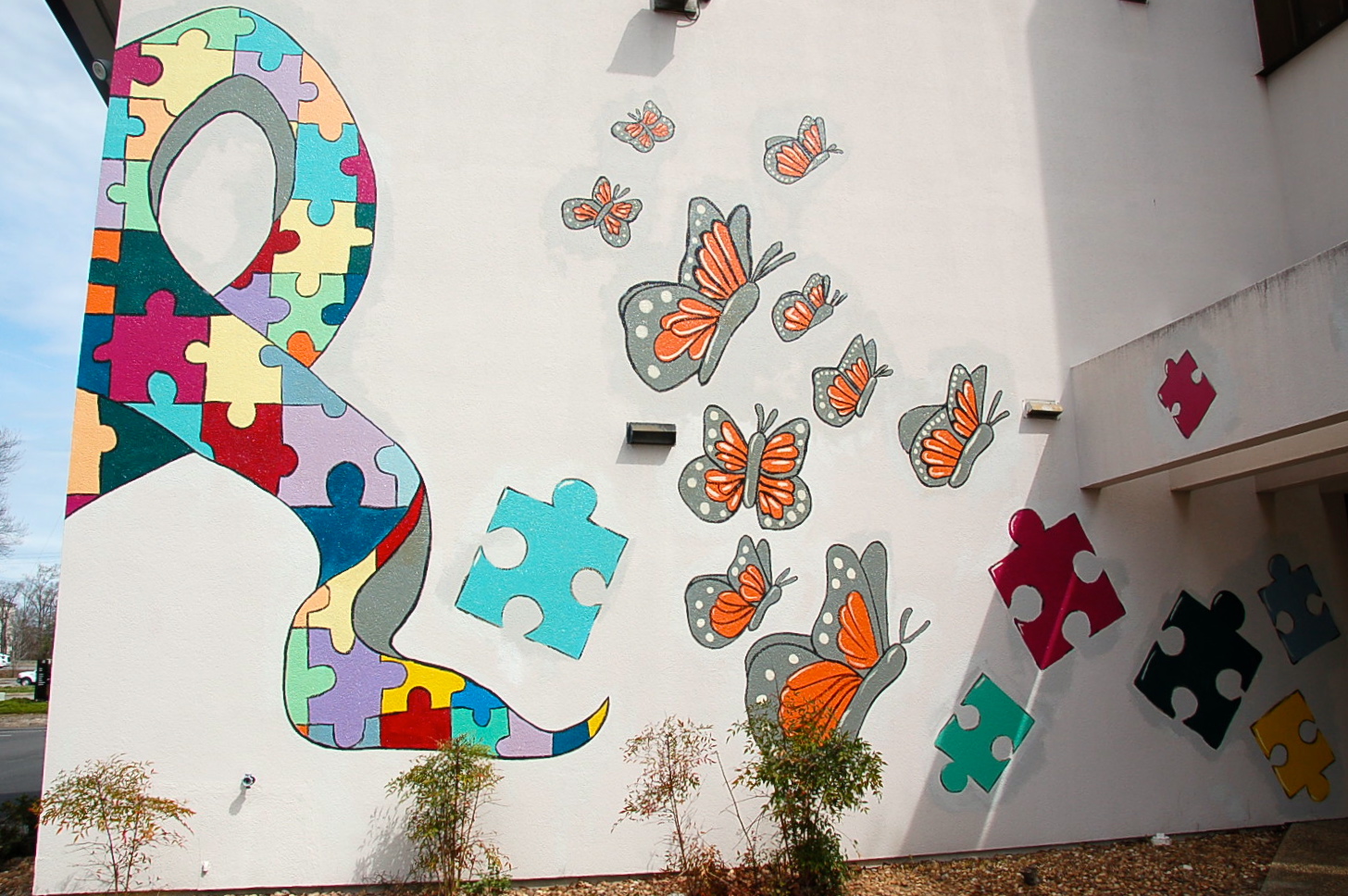 Through her global research, Wilms was disturbed to learn that countries overseas are often “flying away” from neurodiversity.

“If you go to less-developed countries, that’s what my research was based off of, you learn that if you have a mental illness you are often shunned, if not killed. And that broke my heart. They don’t want to fix it. That’s what I learned. It costs money; it’s an economic burden.”

Wilms will continue her studies at Longwood University, where she plans to major in psychology and pursue a master’s degree in neuropsychology and art.

In the short term, she wants people to visit the mural in person and to be inspired by the collaborative work or to create art of their own. 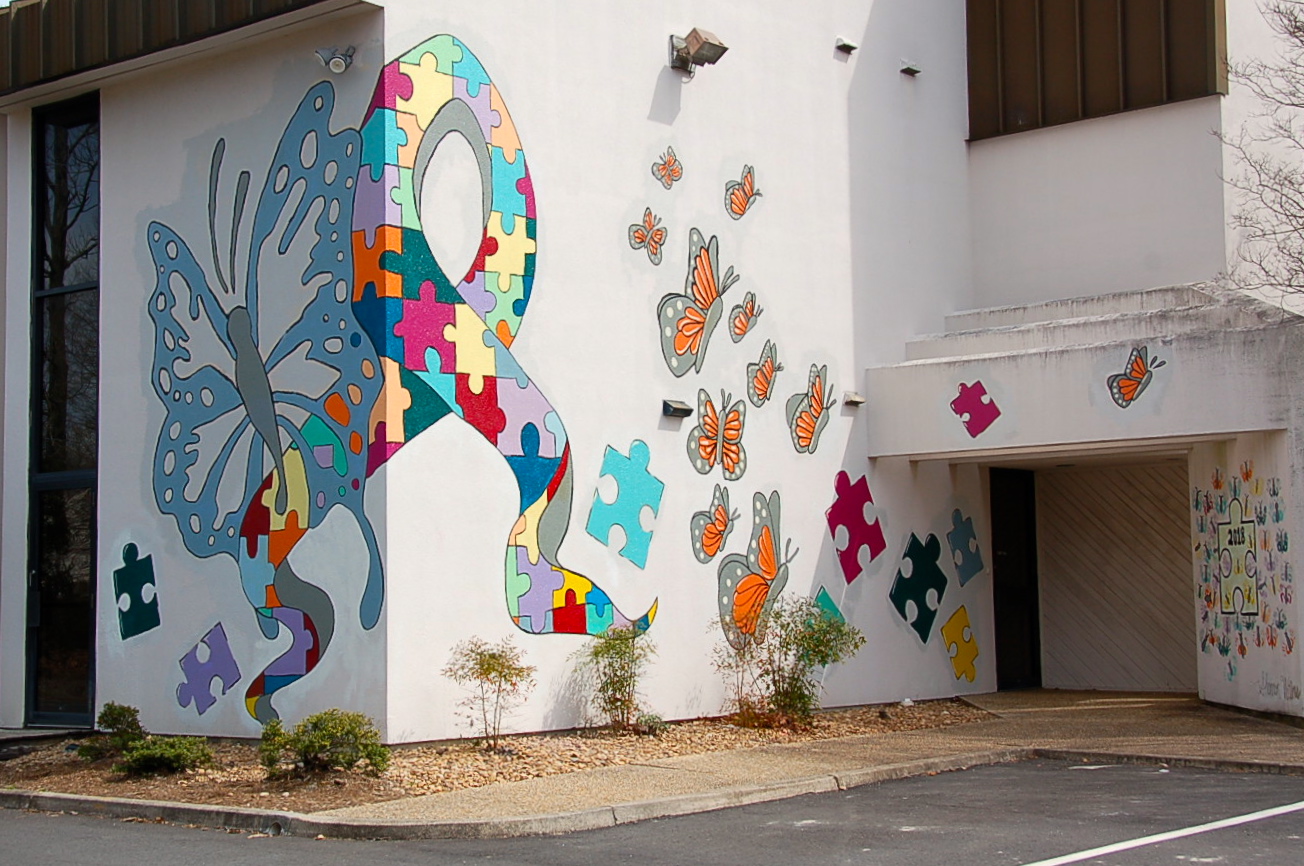 “I want them to have this amazing feeling, like, ‘Wow, these high school students, despite their differences, did this.’ As long as you have ambition and you have the heart and drive, you can do anything with art and you can express yourself.”

“I think Shannon really used art in its greatest capacity which is allowing it to be a visual and physical bridge for communication and understanding. Bringing people together, allowing them to talk with one another, see each other in the physical sense and actively participate, that’s what art is all about. She had a cause and there is meaning involved in it that is going to last.”