Joshua Lytle doesn’t like to be the center of attention. The Navy Petty Officer admitted he even felt uncomfortable being in the spotlight at his promotion ceremony.

However, PO2 (AW/SW) Lytle was willing to be the center of attention for hundreds of high-fiving Ocean Lakes Elementary School (OLES) students arriving to school Thursday. He was among the many volunteers from area Navy bases who visited schools Oct. 13 to celebrate the U.S. Navy’s 241st birthday. 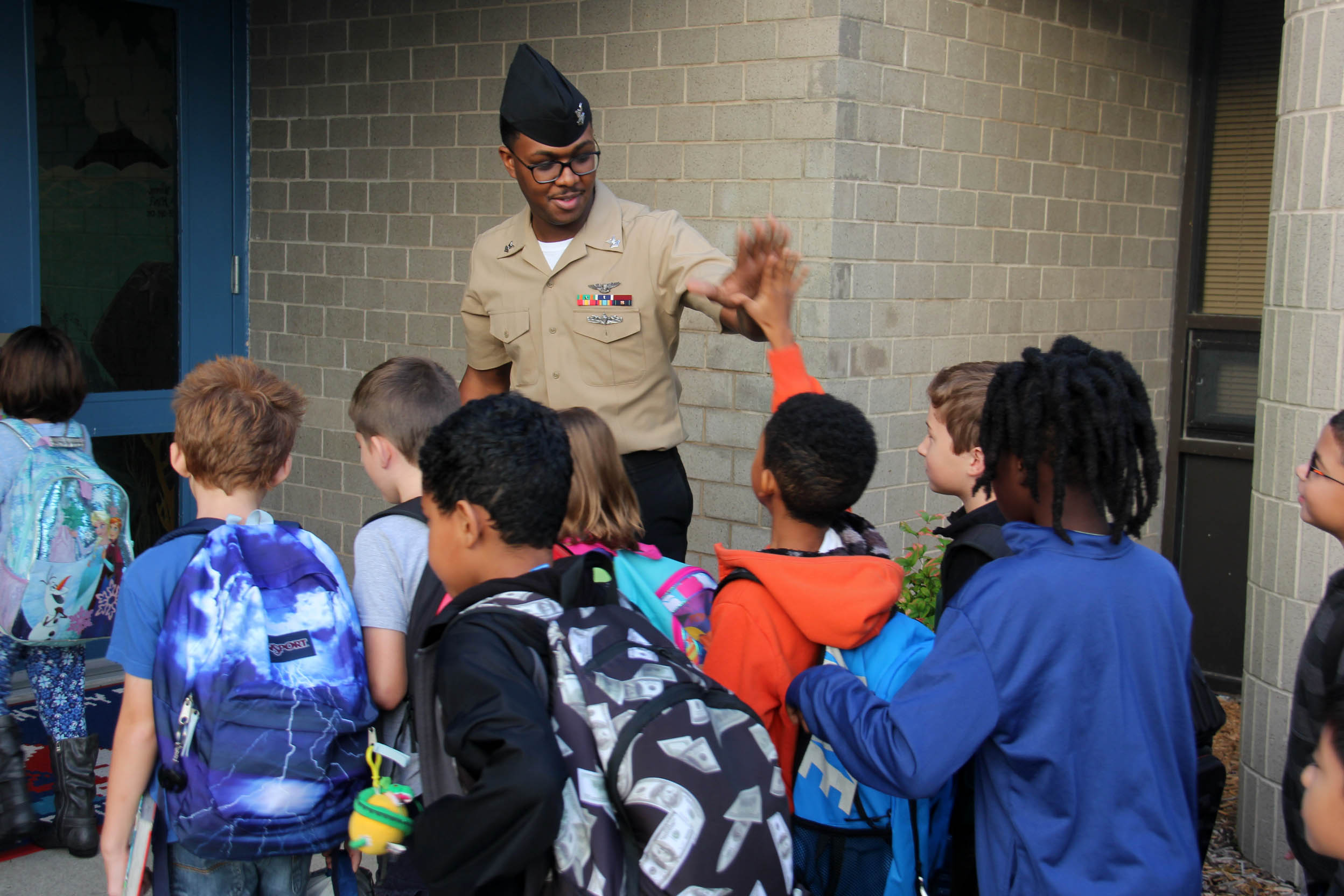 Fourth-grade classes joined Lytle and CPO (AW) Autumn Barnes for a flag-raising ceremony in front of the school. Both serve with Strike Fighter Squadron-81 (VFA-81) based at NAS Oceana.

“We’re really humbled that they let us be here today because it’s a big day for us,” said Barnes. “I was incredibly humbled to see the kids out this morning singing the national anthem and welcoming us to the school.” 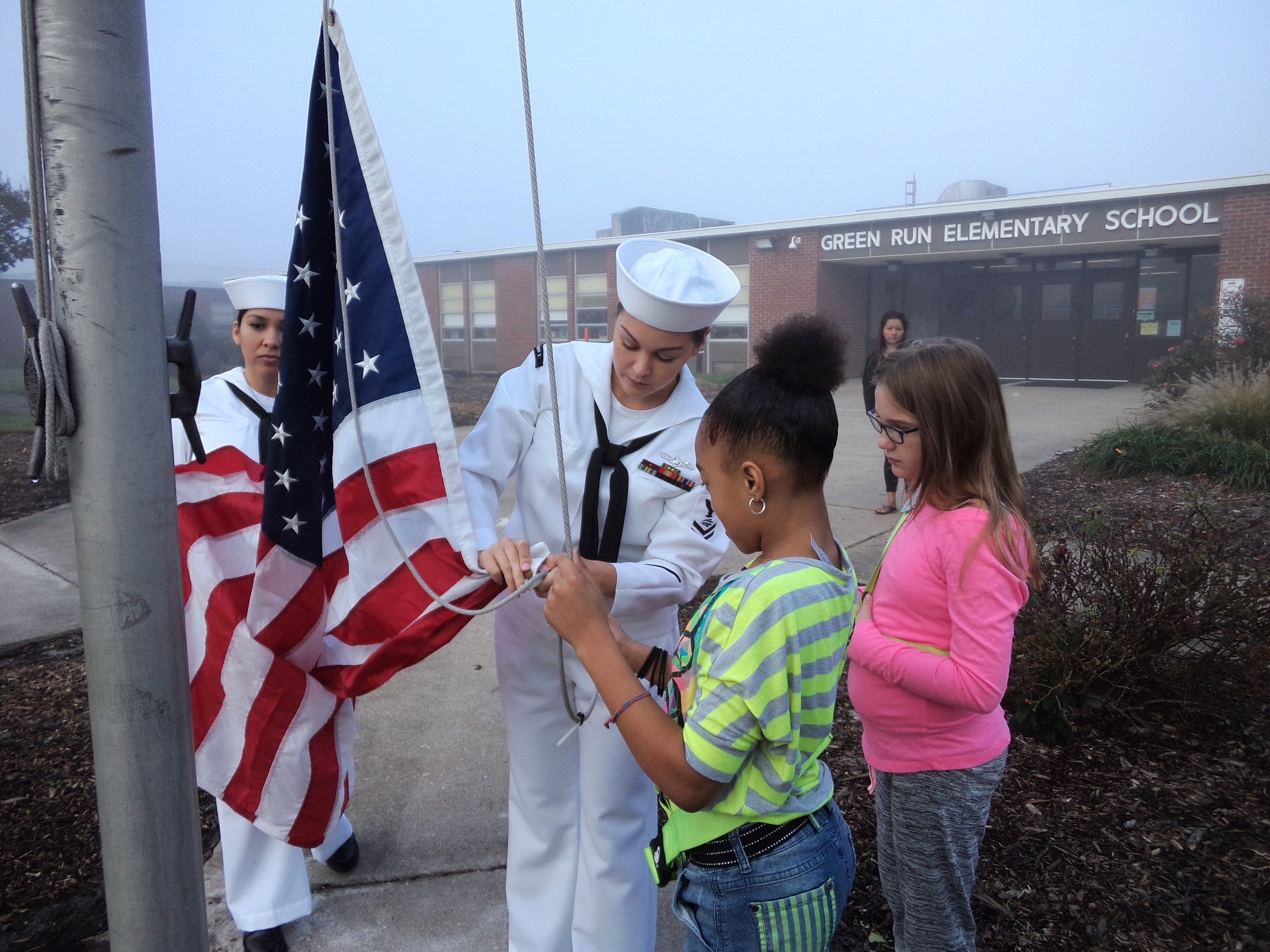 The celebration continued throughout the morning at many elementary schools with Navy personnel visiting classrooms to answer questions, read stories and help with activities.

At Shelton Park Elementary School, Navy personnel not only helped in class but joined in on the fun. Volunteers were active participants in physical education class, including doing pushups and racing four-wheeled scooters with students. 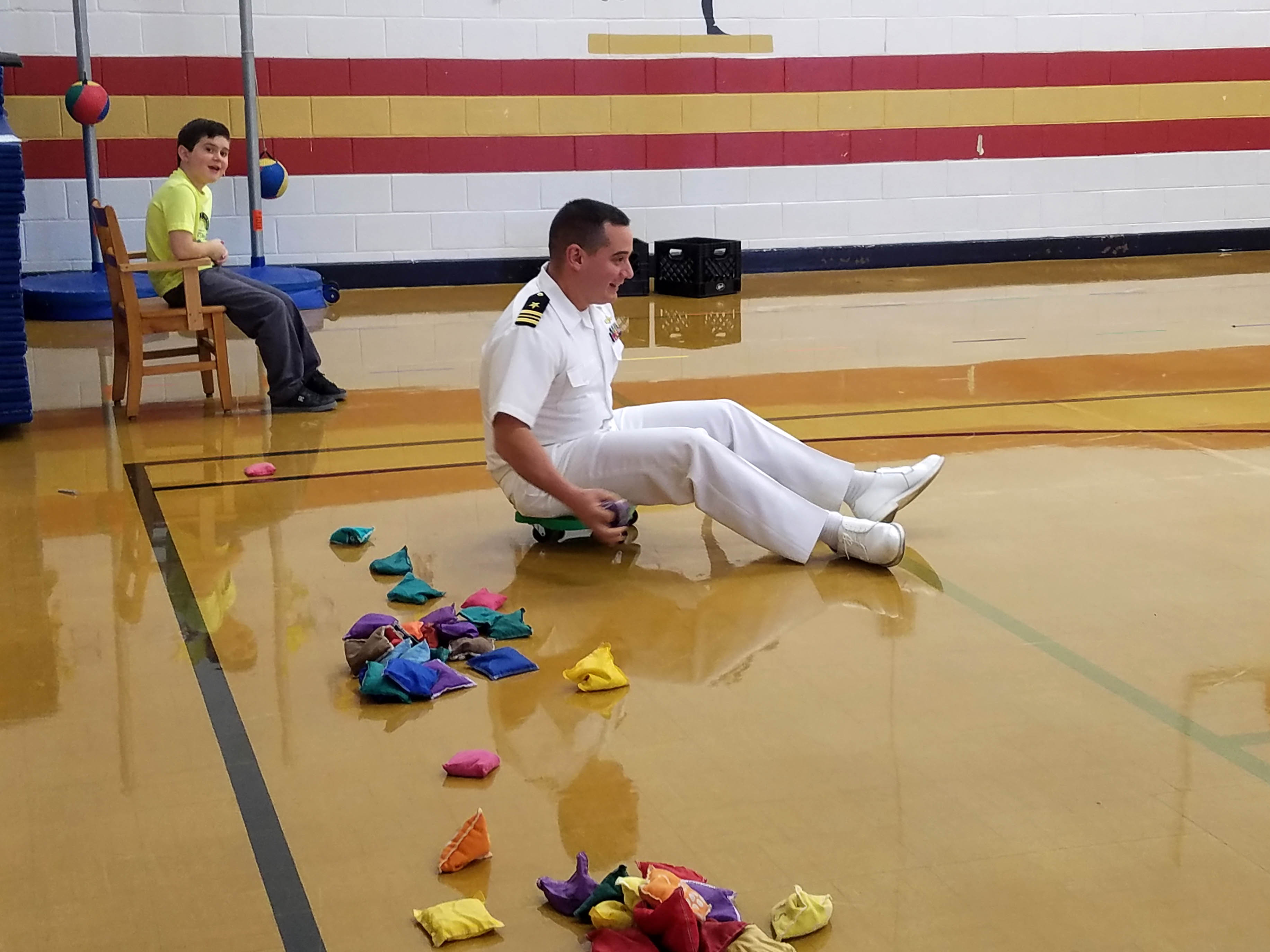 “Have you ever found sunken ships?” asked fifth-grader Brooklyn Smith. Students learned the sailors had found some, especially in shallower waters.

“Do you ever get seasick?” fifth-grader A’ine Jardine asked. Sailors admitted to feeling queasy at sea at times. 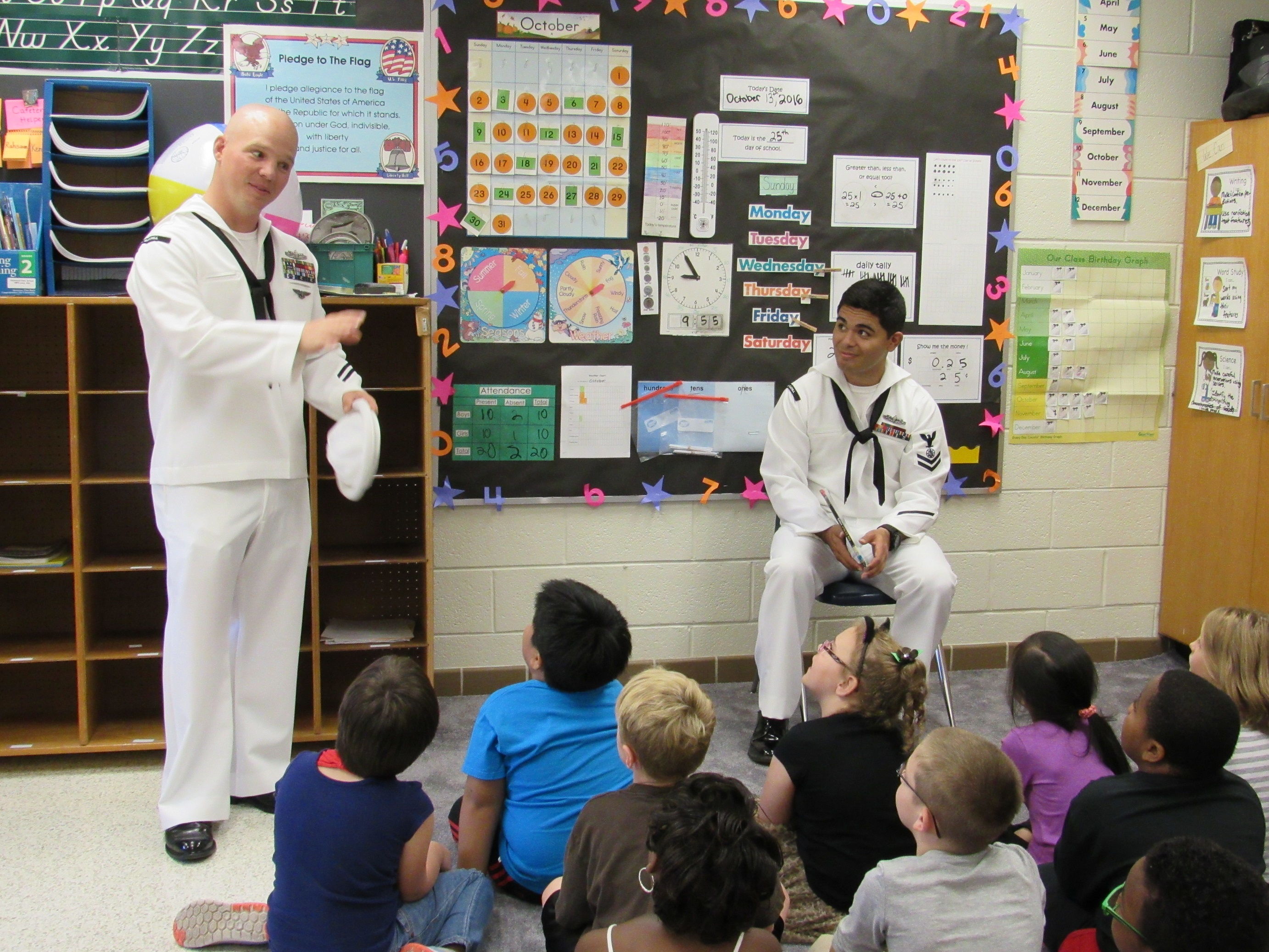 Salem High School NJROTC cadets led their own ceremony to celebrate the Navy’s birthday. Chief Warrant Officer Ronald McMiller was the keynote speaker for a ceremony that also featured cadets sharing historical information about the founding of the Navy. A birthday celebration would not be complete without cake, and cadets cut the cake with two ceremonial swords before sharing pieces with guests.

Back at OLES, Barnes and Lytle visited kindergarten classrooms to read books and answer questions.

“Are you in the army?” asked a kindergartener seated on the carpet.

“No, but the men and women in the Army are my brothers and sisters” responded Barnes.

When she shared she serves in the Navy, there was a chorus of excited responses all at once.

Once the group sharing of stories quieted, the kindergarteners continued with their questions.

“Do you ride on airplanes?” asked a student.

“I ride on airplanes all the time,” Barnes said. “Currently, right now, I am a production foremen for F-18s. F-18s are fighter jets.”

“Oh! Oh!” interjected an excited student sitting on the carpet. “My dad goes on F-18s!”

“They’re awesome!” agreed Barnes. “There’s not enough room for anyone to fly on them except for the pilot. But when we travel with them, we go on other planes and land on the aircraft carrier or go by helicopter.” 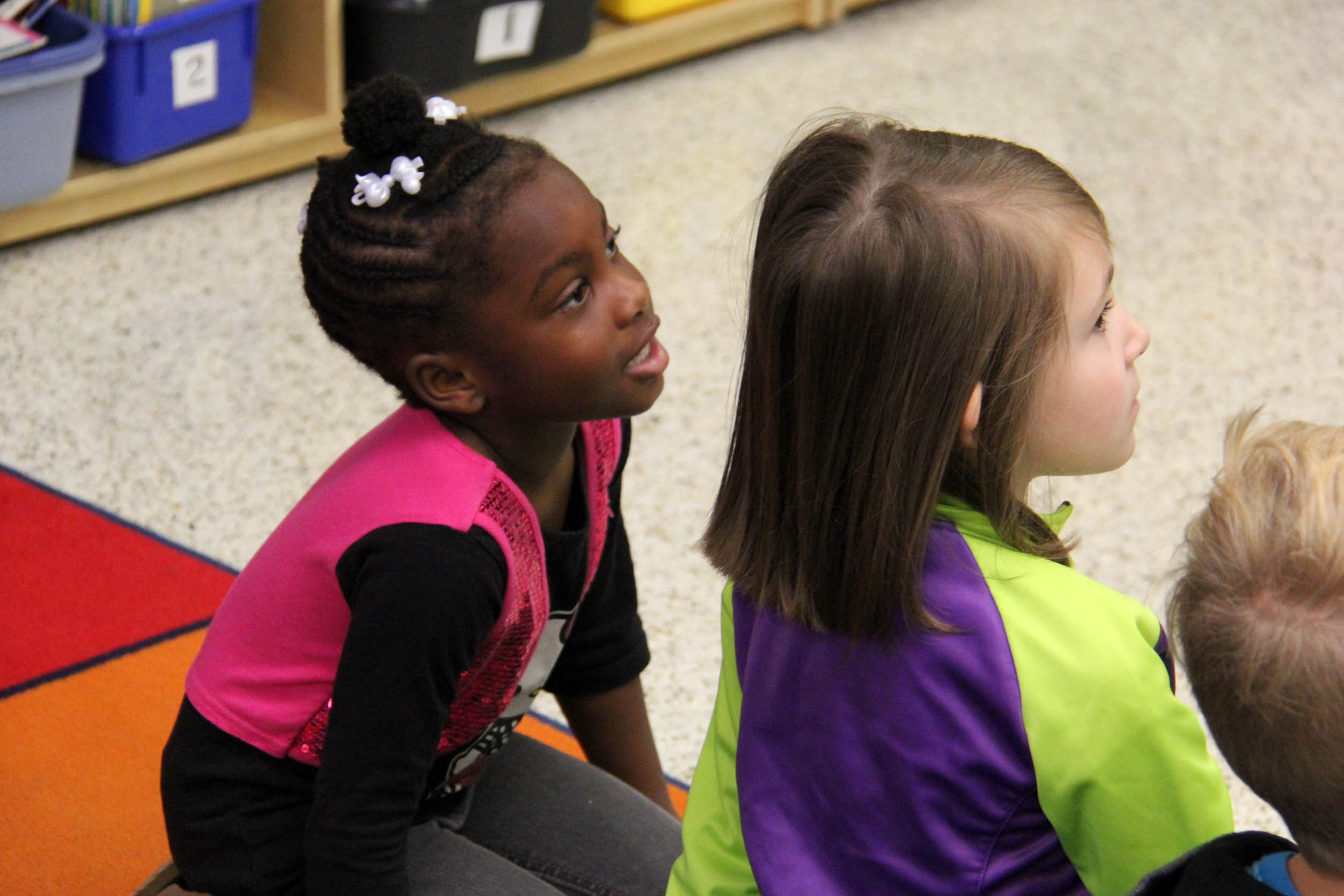 “Do you go to the airport?” asked another 5-year-old.

“Not very often. The airport for me in the Navy is the flight deck of an aircraft carrier,” clarified Barnes. “That’s a ship. It’s a REALLY big ship.”

“OK, you’ll be the last one Connor,” announced Winnett so the birthday guests could visit another classroom.

“Do you help people?” he asked.

“We do help people,” said Barnes. “The Navy is actually responsible for helping out with community relations during disasters and such. Did everybody fair well during Hurricane Matthew? Hurricane Matthew went through a few other countries, and we’re down there bringing food and supplies to those people who are in need right now.”

The students joined Winnett in thanking their special guest, and OLES assistant principal Ryan Simpson escorted Barnes and Lytle to their next class.

Both volunteers wanted to share with students that they value serving their country as well as the experiences they have had as a result.

“I want to share with students that I’m just a kid from Charleston, South Carolina, who, over the past six years, has been to over 20 different countries and seen a lot of cool places,” said Lytle. “There are a lot of good opportunities.” 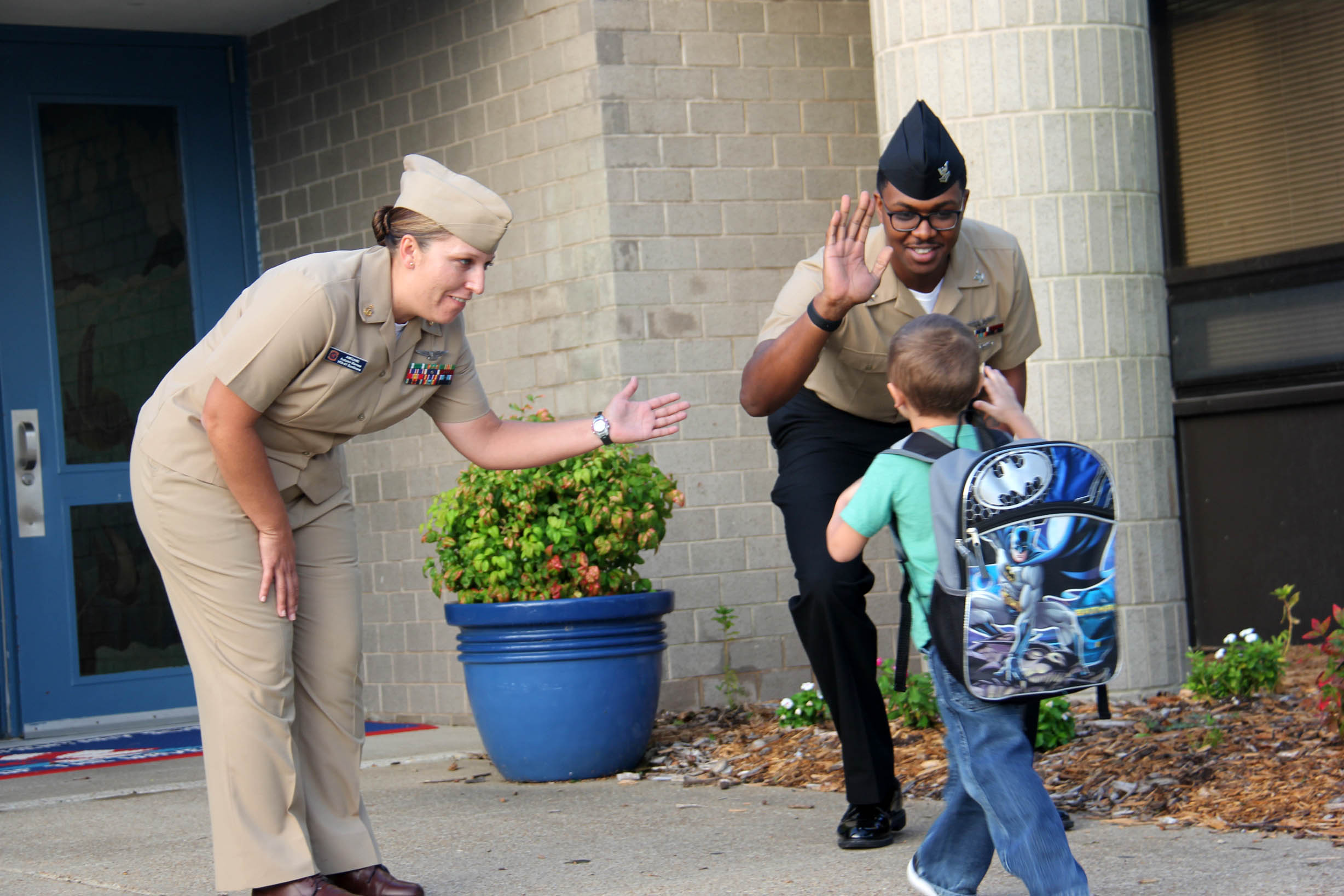 Visit the VBSchools Facebook page to view more photos of how schools celebrated the Navy’s 241st birthday with Navy personnel.