They’re all universal skills anyone can use or might have interest in: counting calories, calculating tips or taxes, or even figuring out baseball batting averages.

The one thing they all have in common: math.

But the three-week summer camp that 20 Plaza Middle School African-American students are attending from Aug. 1-18 is more than just a math camp.

“This program was designed based on reviewing our school data and asking ourselves, ‘Who are we missing and why?’” said Plaza Middle School Principal Joe Burnsworth.

As a result, the school looked at a variety of other successful programs, wrote grants and received support from a variety of resources, including the school’s Parent Teacher Association (PTA), the Virginia Beach Education Foundation, a national grant from the Council of Teachers of Mathematics, Men of Faith from Piney Grove Baptist Church, the Tidewater Boat Builders Association and the school division’s Department of Teaching and Learning and Office of Food Services.

The outcome:  a three-year Building Urban Independence, Leadership and Desire (BUILD) for Success program that they hope is the beginning of making students feel more engaged with their school. 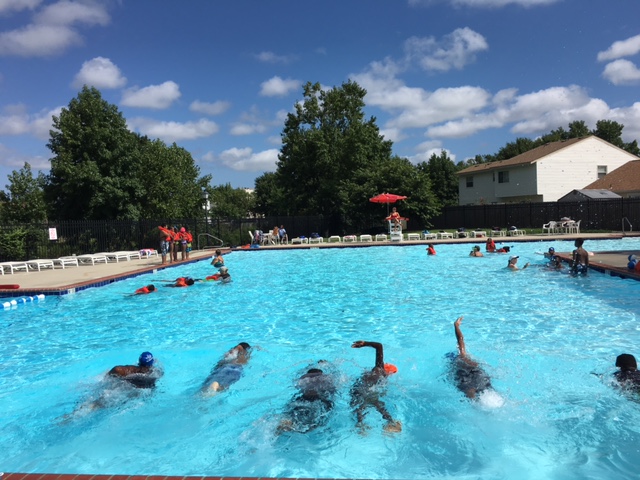 The camp opened with a week’s worth of swim lessons called Really Awesome People Swimming and was taught by professional swim instructors. Since none of the camp attendees knew how to swim, sometimes the hardest part was just diving in.

Starting Monday, one student nearly refused to go into the water, describing it as “scary.” By Thursday, “scary” turned into “fun” as he fearlessly jumped in the pool.

“It’s about changing their mindset that they can do anything,” said Tonia Waters, the school’s Advancement Via Individual Determination (AVID) coordinator/teacher and the BUILD Success director. “At school, these students fear math, just like they did swimming, but by working hard they are realizing that they can overcome any obstacle.”

Next week, students will take another plunge by diving into hands-on activities and more math. After instruction time, the students will participate in a literacy lesson and hear from We Beat the Streets authors, Sampson Davis, George Jenkins and Rameck Hunt. The New York Times biographical bestseller details the obstacles these men faced as students growing up in Newark, New Jersey, and how they made the choices to take charge of their lives and become doctors. Their message to the BUILD for Success attendees will be that anything is possible. 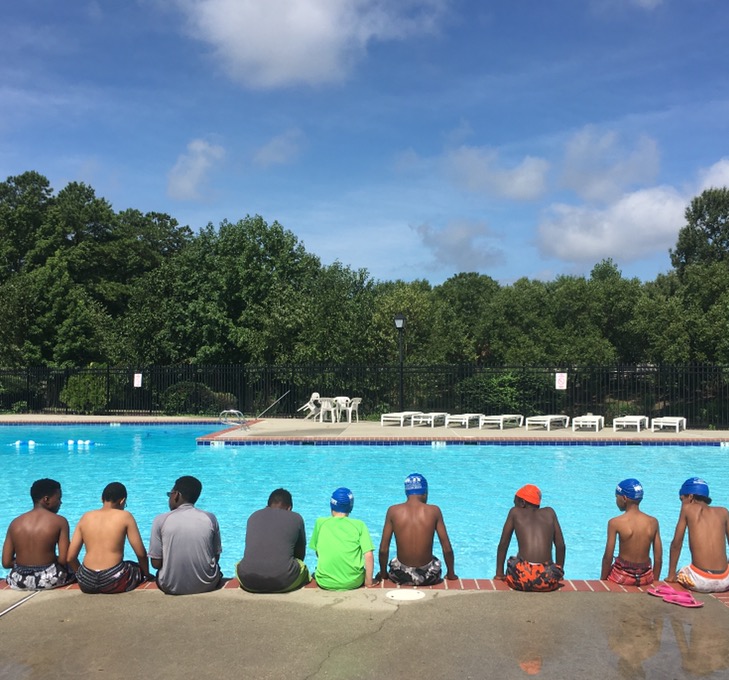 Also part of the camp, the group will participate in team building activities offered by Adventure Park staff, a shop class where members of the Tidewater Boat Builders Association describe how they use math to build boats, and a guitar-making class that once again uses math.

Building off this camp, school staff has a host of activities already planned for the school year, where camp attendees can further develop the skills they learned this summer.

“These three weeks are only the first steps on a three-year journey,” Burnsworth said.

During the school year, a one-man blues musician is scheduled to provide a schoolwide assembly to students this fall and will provide the students in the BUILD for Success program an opportunity to perform using the guitars that they are building during camp.

Mentors will visit camp attendees at the school throughout the year, and the program will also arrange for them to use their math skills in real-life applications, such as attend baseball or football games to work on statistics as well as an outing to a full-service restaurant where students will be able to estimate prices and calculate tips.

According to Waters, these real-life applications of math are sorely needed by students.

The only requirement for the program: that they pay it forward.

“The plan is to build these students as leaders when they are rising sixth-grade students and that they then serve as role models for the students in classes that come after them,” Waters said.

The first week of school, students will lead a program that is traditionally led by school staff where these now rising sixth-grade students will take on a leadership role and introduce their fellow classmates to the expectations of the school.

As Waters said, “We want to not only prepare them for high school but also to instill in them that they the potential to accomplish anything if they just set their mind to it.”