Janice Ricci, a music specialist at Ocean Lakes Elementary School, was selected by the Veterans of Foreign Wars (VFW) as their Teacher of the Year for Virginia. According to VFW, the award recognizes exceptional educators who promote America’s history and the role of our veterans in shaping this great country.

The daughter of a Korean War veteran, a Daughter of the American Revolution (DAR) member, and a Virginia Beach City Public Schools (VBCPS) teacher for 15 years, Ricci was first honored at the local level by Norfolk VFW Post 4809, with whom she serves as their youth activities chair and junior vice president. 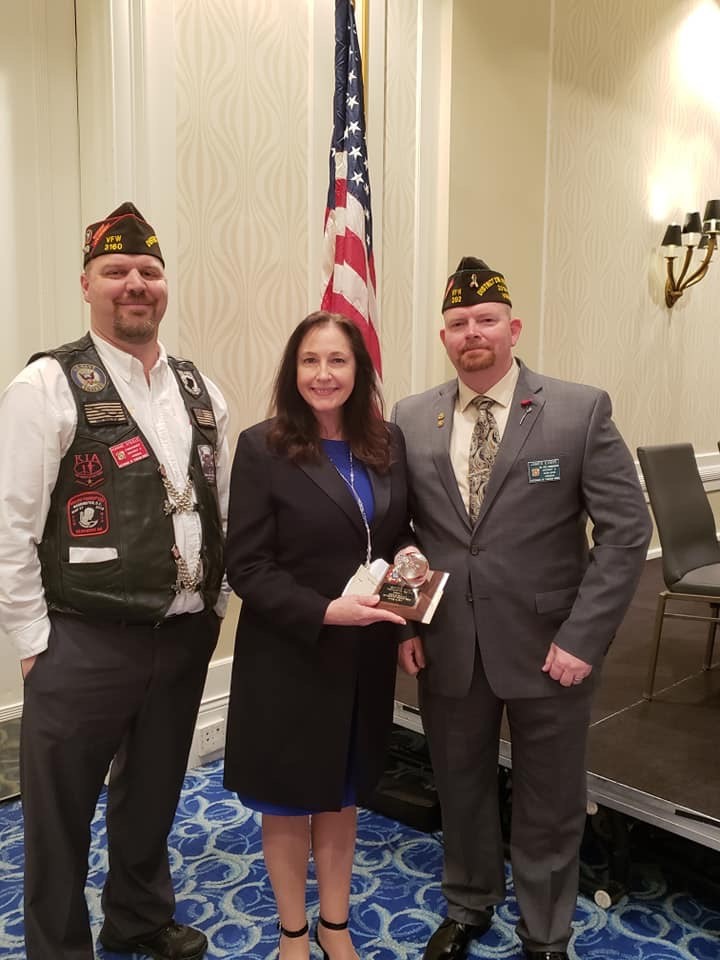 In her nomination application, VFW Post#4809 celebrated Ricci for “instilling the greatness of our country in the minds of children.”

She not only incorporates various patriotic and civic learning activities with her students, she also involves them in communitywide celebrations. She has organized student patriotic performances for a VFW Memorial Day Service; Daughters of the American Revolution local and state conventions; and a 9-11 memorial observance.

Her desire to promote patriotism with her students evolved into a “Patriotic Salute” stage presentation, with first and third-graders dressing as historical characters to tell the story of America through music. That production earned Ricci the “George Washington Award” from the Freedoms Foundation at Valley Forge.

This school year, Ricci helped organize a Veteran’s Day celebration at Ocean Lakes with all students wearing red, white and blue as they opened the event with a schoolwide “Thank a Vet” tribute. All students joined in singing the song lyrics, some of which were “If you love your country, thank a vet” and “If you cherish freedom, thank a vet.” Students across the grade levels had learned the lyrics in Ricci’s music class. That celebration was followed by a schoolwide letter-writing campaign that gave students an opportunity to write thank-you notes and cards that Ricci distributed to veterans with VFW Post #4809, the Hampton Veterans Administration Medical Center and troops overseas.

For her inspirational work, Ricci was honored by the Daughters of the American Revolution for song composition and as her school’s 2016 Teacher of the Year. She is also a USO Hampton Roads volunteer and a national Parent Teacher Association member.

“I incorporate patriotic activities in my curriculum because when American youth appreciate the dreams and sacrifices of past and present generations, it will inspire them to become the next great leaders of our nation,” Ricci stated.

After being honored locally, her nomination was advanced to the state level where she was named the Commonwealth’s VFW Teacher of the Year.