“Brilliant!” was the enthusiastic reply from several time zones away. “Let me know when you are ready. We are standing by.”

Less than two minutes later, TOES students “landed” in South Africa’s Kruger National Park not far away from lounging lionesses. Safari guide James Hendry, a native of Johannesburg, greeted them from an open-air jeep nearby.

“Welcome to the students of Three Oaks Elementary School in Mrs. Gowen and Mr. Connery’s class,” announced Hendry with a distinct South African accent. “You’re in Virginia Beach, Virginia, and it’s great to have you along on a live safari with us!” 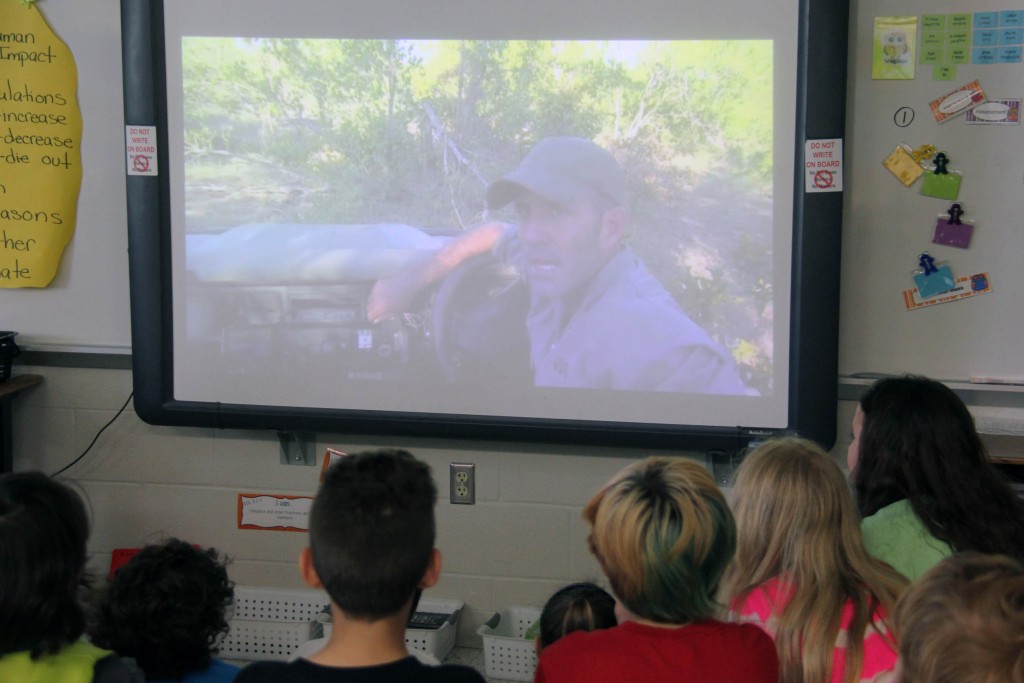 Nat Geo Wild offers three-hour livestreams twice daily to give viewers, like these TOES fourth-graders, a front row seat on a safari. Some schools are scheduling times to ask guides questions while watching, enhancing the educational experience.

“As a global passport school, we are constantly looking for ways to link our curriculum to our global community, and Safari Live is one way to accomplish this,” said Kathryn Shuffler, TOES gifted resource teacher.

“We’re coming to you from the northeast corner of South Africa. We’re all the way across the Atlantic, and then all the way across another continent many, many thousands of miles and whole hemisphere away from you broadcasting live,” he said.

“Please ask as many questions as you like about the animals we’re going to see. I hope we’re going to see lots of different kinds of animals. But first of all, let’s have a look at these lionesses,” said Hendry as the camera view returned to the sleepy animals.

No prodding necessary for the fourth-graders to ask questions. Students began sharing questions with adults circulating the classroom at the first sight of lionesses. Wuesthoff typed their questions in a live Skype session viewed by Hendry and a second safari guide, Sam Chevallier, in a different part of the park. 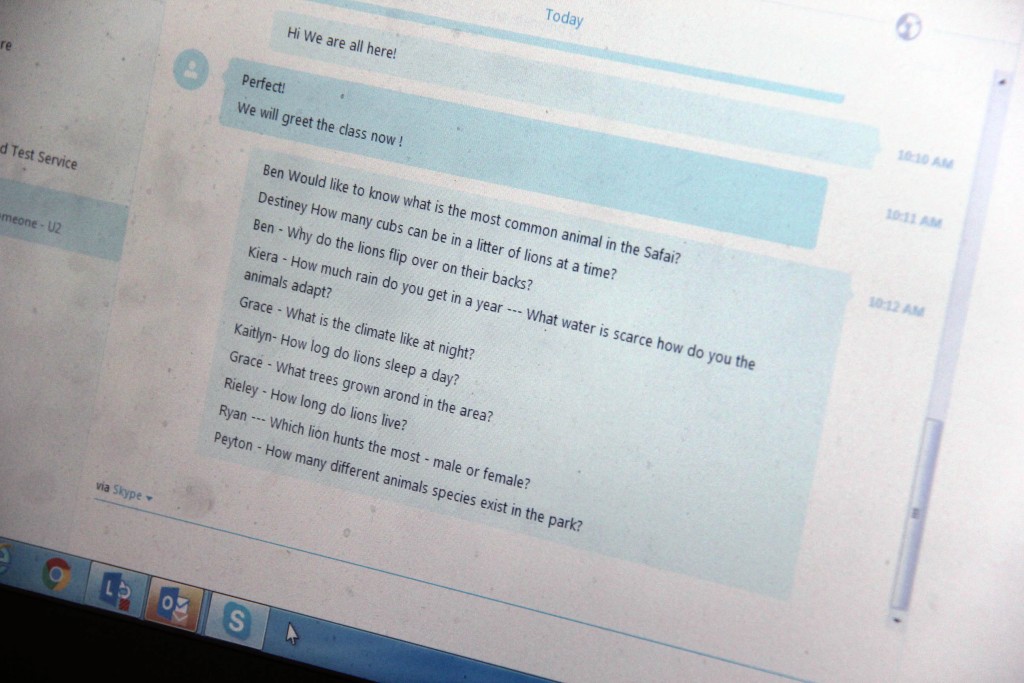 Students soon learned that even though they were thousands of miles away, they were driving the day’s lesson with their questions.

“Ben, a very clever question from you straight away,” said Hendry, prompting a big grin from Ben and envious glances from peers.

It was afternoon for Hendry in South Africa — 4:15 p.m. under sunny skies. For TOES fourth-graders, it was 10:15 a.m. on a rainy day in Virginia Beach.

Sitting in rapt silence, students watched the live broadcast while Hendry, primarily speaking off camera, masterfully wove students’ questions and his answers into his narration of the safari, always identifying students by name. 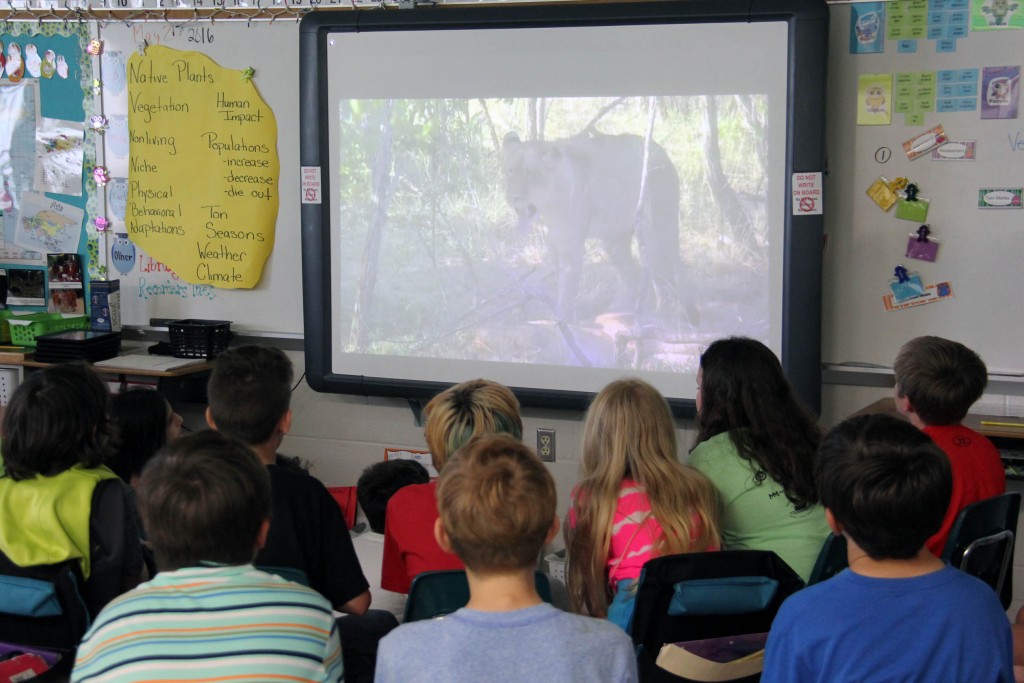 “And Destiny, I’ve spoken about that lioness who has gone off to give birth, and you want to know how many cubs she’ll have.”

“Ryan, you’re interested in who hunts – the males or the females.”

“All right, Rylie, you want to know how long lions live for.”

“Ben, you ask a very good question, ‘Why do lions flip over to their backs?’ Ben, do you move when you sleep? I bet many people do. I move when I sleep,” said Hendry before offering two reasons and relating it to how humans sleep for students’ better understanding.

“And, Kaitlin, you’re wondering, ‘How long does a lion sleep for a day?’ Kaitlin, you won’t believe me if I tell you, a lion sleeps for up to 20 hours of the day,” answered Hendry, eliciting a group “wow” from his viewers in Virginia Beach.

“Remember there are 24 hours in a day, so for only four of those hours the lion is awake,” Hendry said. “The rest of the time they are fast asleep — doing nothing at all. If they’ve got a big kill, let’s pretend they killed a big giraffe around here, they would be asleep for more than 20 hours. They only wake up to have something to eat.”

More questions and detailed answers continue before Hendry tells the fourth-grade audience he is going to search for other animals to show them. Fellow safari guide Chevallier takes over the live broadcast in another area of the park, where he is near buffalo in a watering hole. 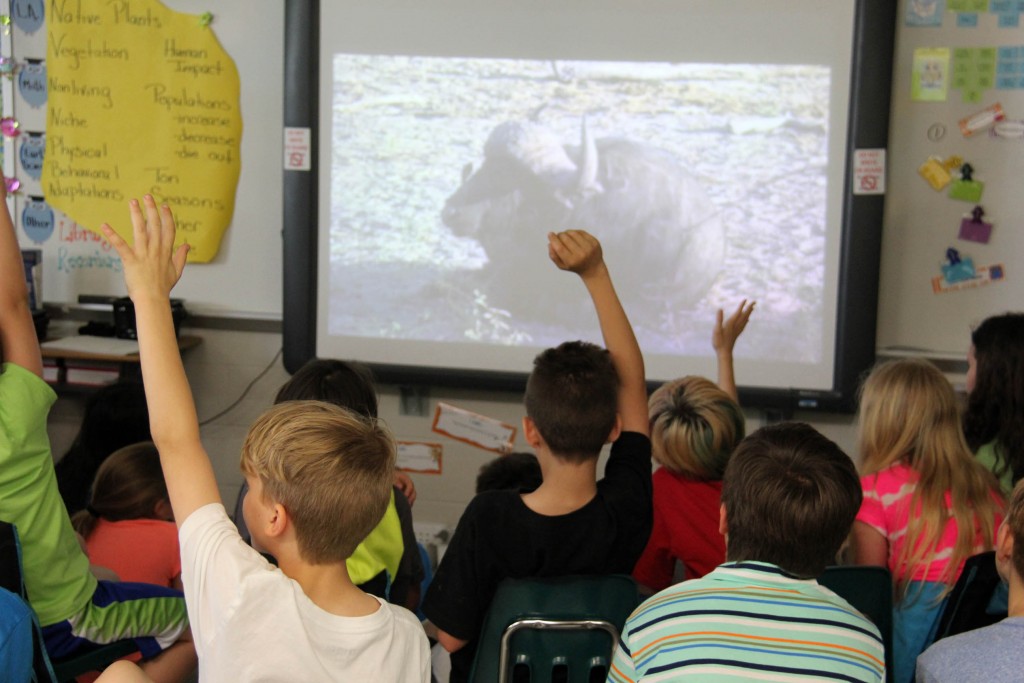 “Good afternoon Mrs. Gowen, Mr. Connery and Three Oaks Elementary! It is fantastic to have you out here in the bush this afternoon,” welcomed Chevallier. “Hopefully we’re going to be able to bring you into the experience of this place to show you some of the birds, flowers, animals and potentially talk a bit more about communities and populations of animals and how ecosystems work.”

New scenery and new animals means more questions from the students which Chevallier answers with the same personal touch and expertise of Hendry. Water, weather, buffalo and plants are all covered.

“Grace would like to know what trees grow in this area,” began Chevallier. “The trees coming into focus here are two different trees. We’ve got a bush willow, that’s on the left, the bigger one there. That’s a delicious meal for an elephant. On the right of that, look at all those thorns on that tree. It’s an Acacia tree and that is a tree that is loved by some of the elephants out here. Look at the size of those thorns. You don’t want to get one of those in your foot because it is exceptionally sore. I’ve had one of those.”

Chevallier’s cameraman zooms in to show thorns and branches of a tree that have been snapped off by elephants.

Elephants become the focus of the safari when, 10 minutes later, Chevallier receives word that Hendry has spotted several herds. “Let’s go see how he is doing,” Chevallier told students. 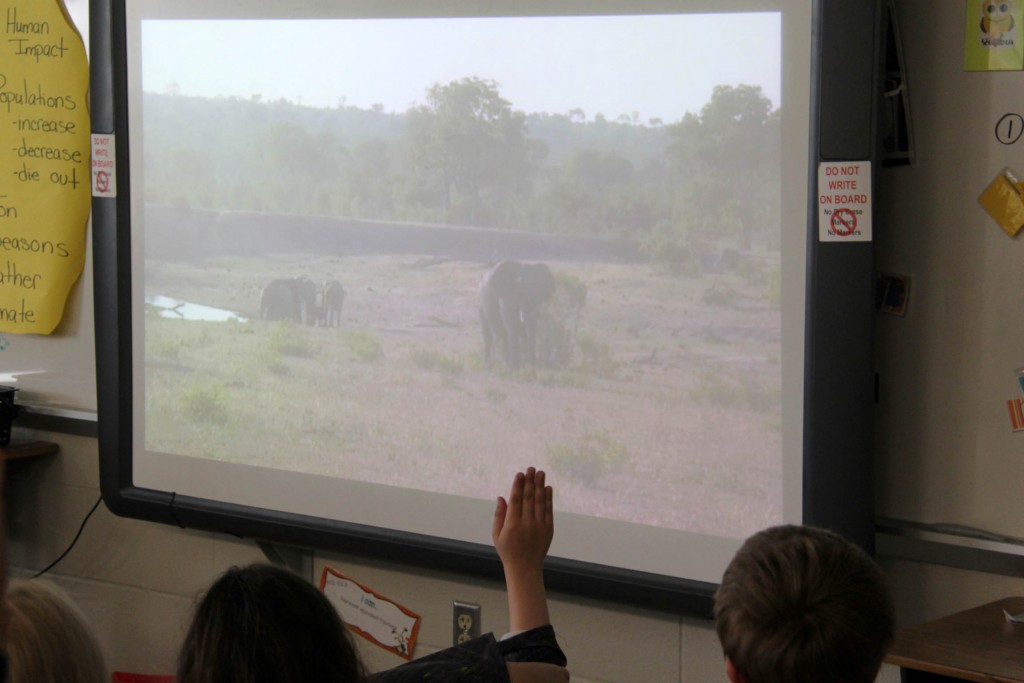 “Awwww,” cooed fourth-graders collectively at the sight of the first elephant.

“And there, everybody, is the true king of the jungle, the bush, the wild. The great African elephant,” remarked Hendry. “There’s a whole herd of them having a drink at the dam there. There are some next to us eating. It’s probably three or four different herds together.”

While observing the herd, including a student-favorite baby elephant, the feed stops in the middle of a response to a question about elephants’ growth and size.

The students’ adoring “awwww” earlier turns into an audible “awwww” of frustration.

“It’s OK,” reassured Shuffler. “We told you there might be a little glitch. It’s all right. You can be thinking of questions.”

The live feed resumes quickly with a switch to Chevallier who is driving. 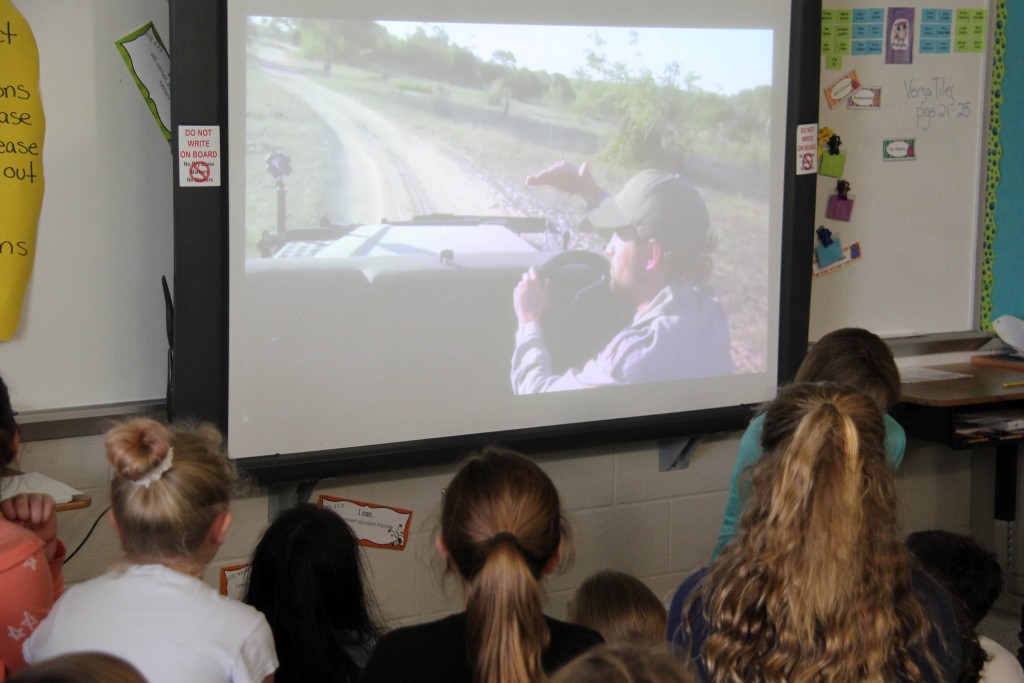 “We’re going to see if we can find ourselves some antelope,” said Chevallier before explaining the technical difficulty.

“The reason you are with me and not James anymore is because sometimes we lose signal because we’re live. And we’re out here in the bush and sometimes we have a problem with our technology,” he said. “That’s why you cut to me after the elephants. There are two teams out here working to see if we can find you animals.”

The student audience is forgiving. After all, they know “technical difficulties” happen to them daily – and they aren’t in the middle of a game reserve.

Chevallier notes different animal tracks he sees, including those of zebras, and plans to follow when he transitions the safari back to Hendry who is speaking in a whisper. 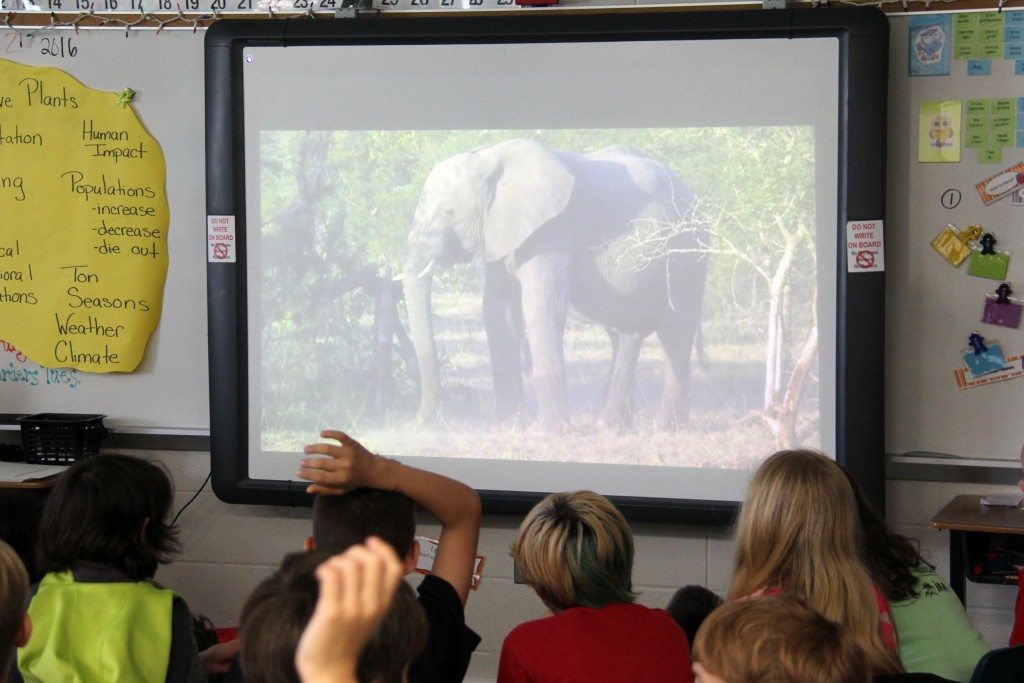 “So we’ve got to talk very quietly now everybody because the herd of elephants is going to come past us and I don’t want them to be frightened by the sound of my voice. So I’m just going to speak quietly like this and we’ll get a lovely view of this herd of elephants led by the female. I think that’s the matriarch. She will lead them as they go around trying to find nice plants to eat.”

Questions about an elephant’s vegetarian diet leads to the biggest thriller of the safari for students – and it doesn’t involve animals.

“Grace asked how elephants can eat thorns on the branches,” said Hendry. He explains that elephants’ large, rubbery tongues prevent them from being harmed and then demonstrates it would not be the same for humans. 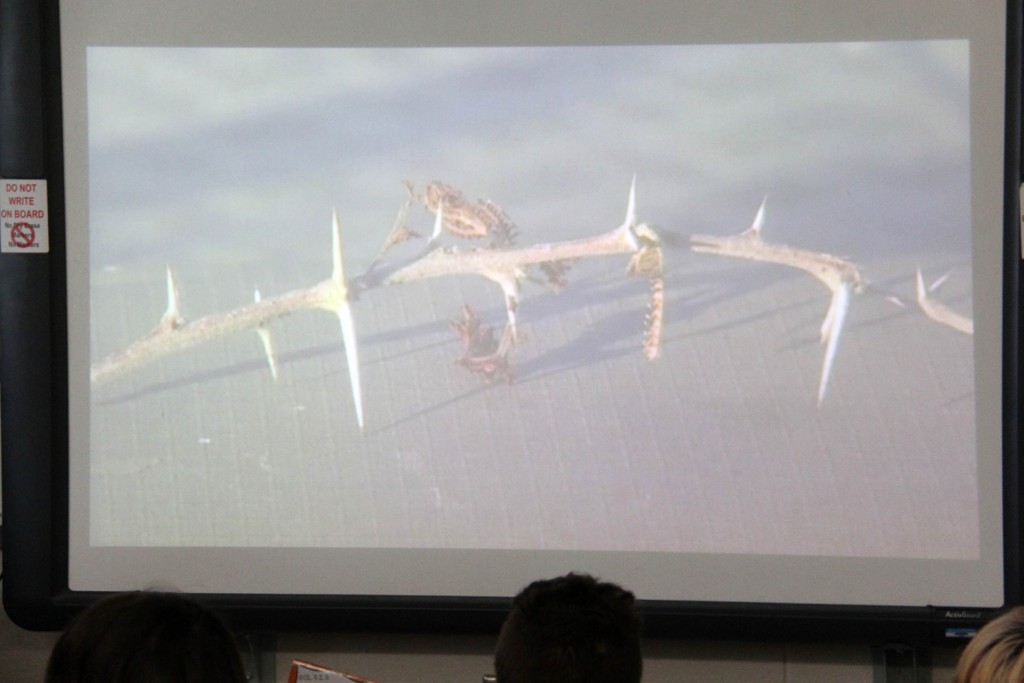 “If we take this thorn, look how sharp it is. You see that? It’s very sharp – right into my finger,” Hendry said pushing the point of the thorn into his skin.

“Oh wow! Look at that!” students said to one another while others simply gasped.

“See how brave I am here,” said Hendry chuckling. “Kids please don’t do that where you are at home. I just wanted to show you how sharp it was. I didn’t draw any blood, it’s not really sore. I just put it into the skin. Don’t go home and start sticking thorns into yourself.”

The safari returns to talk of animals, ecosystems and the best part of being a guide.

After almost 45 minutes, it ends with a cliffhanger – courtesy of a final technical glitch.

“I want to show you something up here,” Hendry told students while driving down a tree-lined path. “There was a leopard around here today, and he killed something and he put it in a tree. I just want to show you what he did. We don’t know where he’s gone, he’s disappeared from here…”

Heydan also disappeared. The live feed buffers and then stops, giving teachers Gowen, Connery and Shuffler the perfect opportunity to debrief with students.

“What did you think, guys?” asked Gowen.

“It was so cool,” said several students together.

Gowen praised, “You all had some amazing questions.”

What surprised or amazed them most?

“To me, it was when he stuck that thorn in his finger,” said one student. “He was so brave since it was so sharp.”

“I was surprised that in the morning it gets really cold and in the afternoon it’s like 100 degrees,” said another.

“I was surprised that elephants will eat almost anything out of the ground,” said Sam.

“I was surprised at how the girl lions were just sitting there and being so calm while we were watching them,” said Grace.

Nate added, “I was quite surprised that they sleep for over 20 hours.”

Aidan noted his awe that he and his classmates could go on a live safari from their desks in Virginia Beach.

He remarked, “It was amazing that they could actually send pictures of stuff from the other side of the world.”