Kellam High School senior Grace Jeffrey is the 2017 Brickell Scholarship recipient, a scholarship awarded by the Virginia Beach Rotary Club to honor seniors for exemplary academic performance and active involvement in school and community activities. As the honoree, Jeffrey will receive a $6,000 college scholarship. 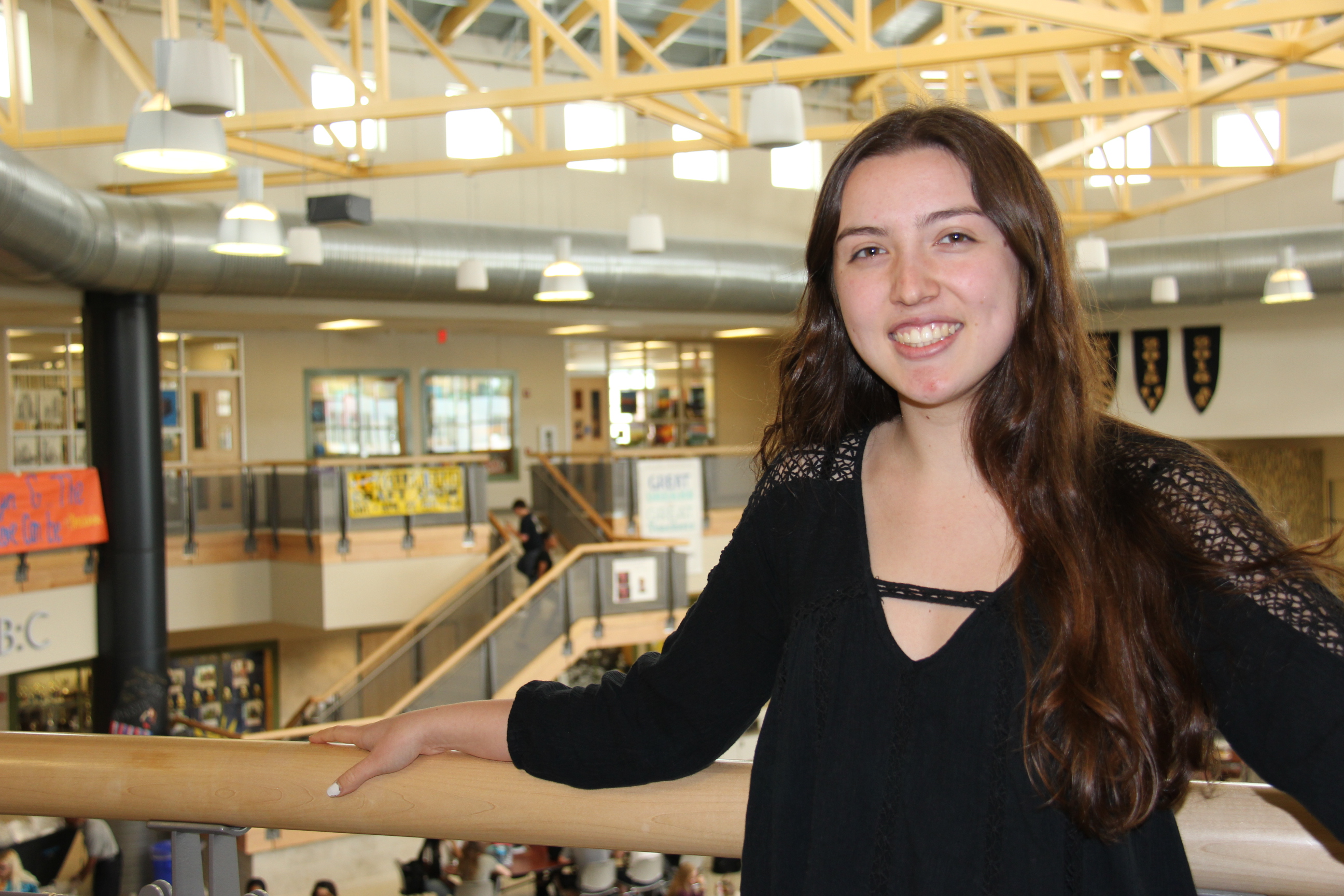 In addition, the following juniors were announced as the 2018 Class of Brickell Scholars and will be candidates next year for the scholarship that carries the namesake of longtime former Virginia Beach City Public Schools Superintendent Dr. Edward E. Brickell:

The scholarship announcement was a surprise to Jeffrey. She was sitting in her chorus class when School Board Vice-Chairman Dan Edwards, Rotarian who chairs the scholarship committee, Kellam High School Principal Daniel Smith and gifted resource teacher Kelly Turner walked in holding a bouquet of balloons to announce that she is this year’s scholarship recipient. 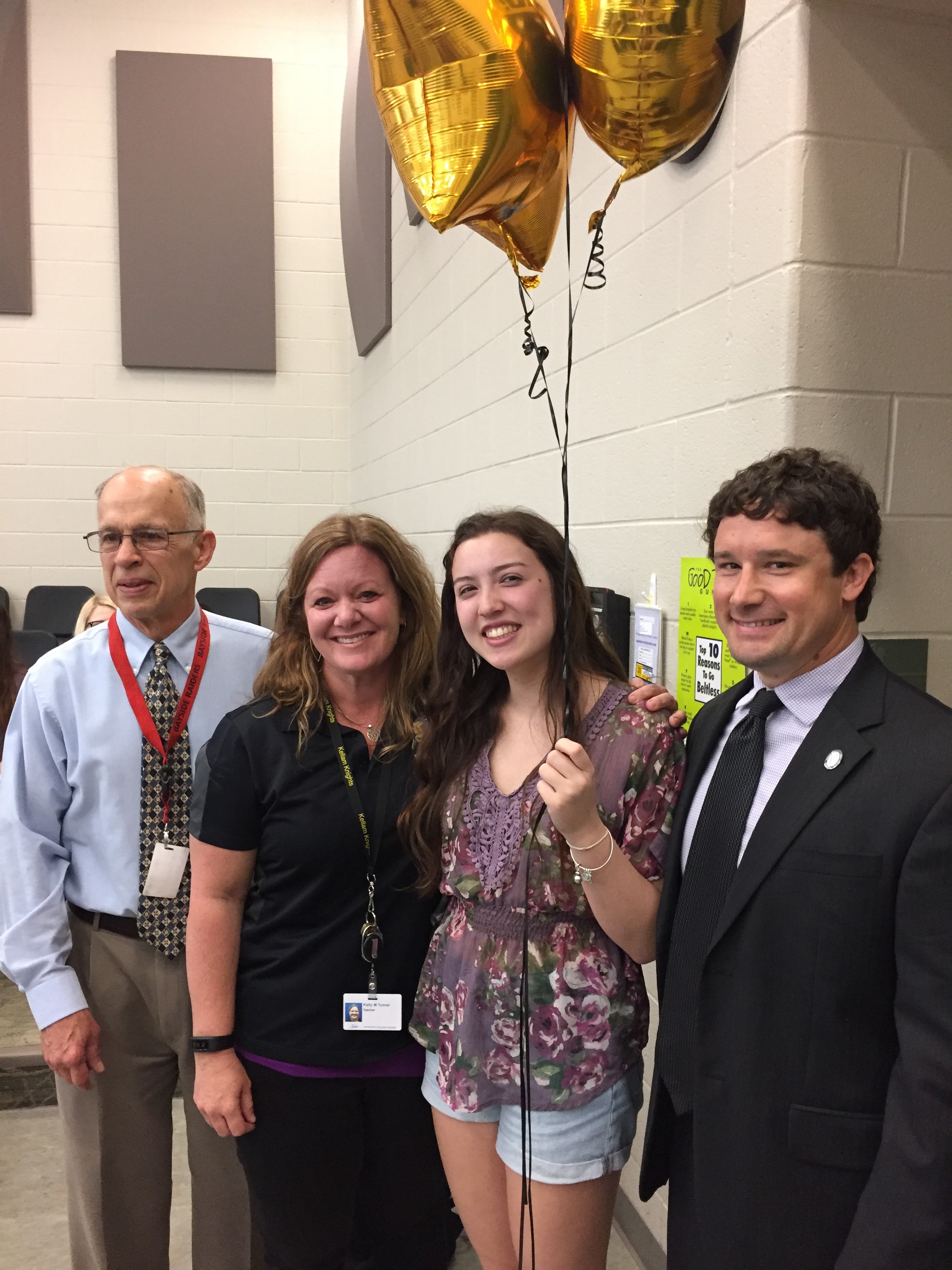 “I didn’t think I was going to get it,” the Duke University-bound senior said. “I had the opportunity to get to know all of the Class of Brickell Scholars and they are all incredible people so I was really thinking it really could be any of us.”

Jeffrey was one of 23 high school students who last year were named the 2017 Class of Brickell Scholars. At the conclusion of each senior year, Rotarians select one honoree as the Brickell Scholarship recipient, which is accompanied with a college scholarship funded by the service club.

High school students have the opportunity to apply for the program during their junior year to become one of two students to represent their school as a Class of Brickell Scholar. Green Run has three nominees, one of whom is from Green Run Collegiate.

During their senior year, Brickell Scholars are provided the opportunity to participate in various seminars on a range of current issues where they meet industry experts as well as Brickell Scholars from other high schools. Jeffrey described the seminars as “fun opportunities where you get to learn and network.”

Networking and getting involved is something very familiar to Jeffrey.

She began volunteering when she joined Girl Scouts in first grade and through involvement in her church. During that time she also studied piano and was involved in dance. By middle school she was on the debate, forensics and academic challenge teams at her school. By high school, the list kept growing. She added drama, chorus, student council, honor society and numerous activities such as serving as a Drama Kids Camp coordinator, joining other members of her school in a food drive for the Foodbank of Southeastern Virginia, shopping for back-to-school clothes for a women and children’s shelter through a service project organized by a local ministry, volunteering for a “Stop Hunger NOW” meal packaging event for children in Africa, dressing up as a well-known children’s character during an event for military families, visiting senior citizens with her church during the holidays to sing carols, volunteering at her school during Open House events for rising freshmen and numerous other projects.

All during that time, she never let schoolwork slide.

She managed to maintain a 4.37 grade point average in school and received numerous academic honors, including recognition as a National Merit Finalist, a distinction awarded to the top 1 percent of the nation’s seniors based on performance on high school SATs as well as involvement in extracurricular activities.

Ask her how she manages everything, she has a simple answer.

“It is not a matter of having time; it’s about how you schedule your time.”

She also adds that she’s a very curious, creative person who loves “trying new things, seeing what I’m good at; taking risks and really investing in my community and opportunities that I’m given.”

Pursuing opportunities, such as this scholarship program, is something that she would recommend to students who are considering applying.

“It’s an incredible program, an incredible opportunity and I would encourage everyone to embrace it if you’re selected. Attend all of the seminars. It’s full of amazing opportunities that you wouldn’t have otherwise. You will discover something amazing.”