When the coronavirus hit Hampton Roads, Todd Flickinger had been working as a firefighter for Norfolk International Airport, part of a decades-long career that included service for the City of Chesapeake. 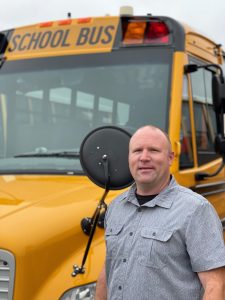 “COVID came, nobody was flying, and they asked for people to voluntarily furlough.” he recalls. “After 20 years of working 24-hour shifts and being away from home 10 days a month, I thought it would be nice to sleep at home every night.”

Too young to retire, Flickinger wanted a job where he could retain his Virginia Retirement System (VRS) benefits. He wanted to do something good for the community. Driving a school bus for Virginia Beach City Public Schools fit the bill.

“It’s been better than I expected,” he says. “It’s day hours, you’re off on holidays, the kids are great.”

Even though he was already trained to drive every kind of fire truck there is, he still had to get his Commercial Driver’s License (CDL). And he acknowledges that those who have only driven cars may be intimidated by the notion of operating a bus. But that shouldn’t be discouraging.

“There’s plenty of preparation,” Flickinger assures. “You’re not just thrown out there to it. There’s tons of training.”

“If you had asked me if I was ever going to be a bus driver, I would have said, ‘Are you crazy?’” Flickinger smiles. “But…here I am. I love it. It’s great.”

-by Svetla Tomanova In early April, the Teacher of the Year committee shared the names of the finalists of the Virginia Beach City Public Schools’ 2023 Citywide Teacher of the […]