Bus driving is a tradition for three generations of Sherwood Bernard’s family. He, his aunt and his grandmother have always taken pride in their work.

“We want a bus that reflects us,” Bernard said. That means getting to know your young riders and keeping your bus clean.

“A few days before the end of the school year, I was listening to the happy voices going back and forth behind me as I was driving my bus,” Bernard said. “I remember thinking to myself, ‘This is what I really meant to do.’ “ 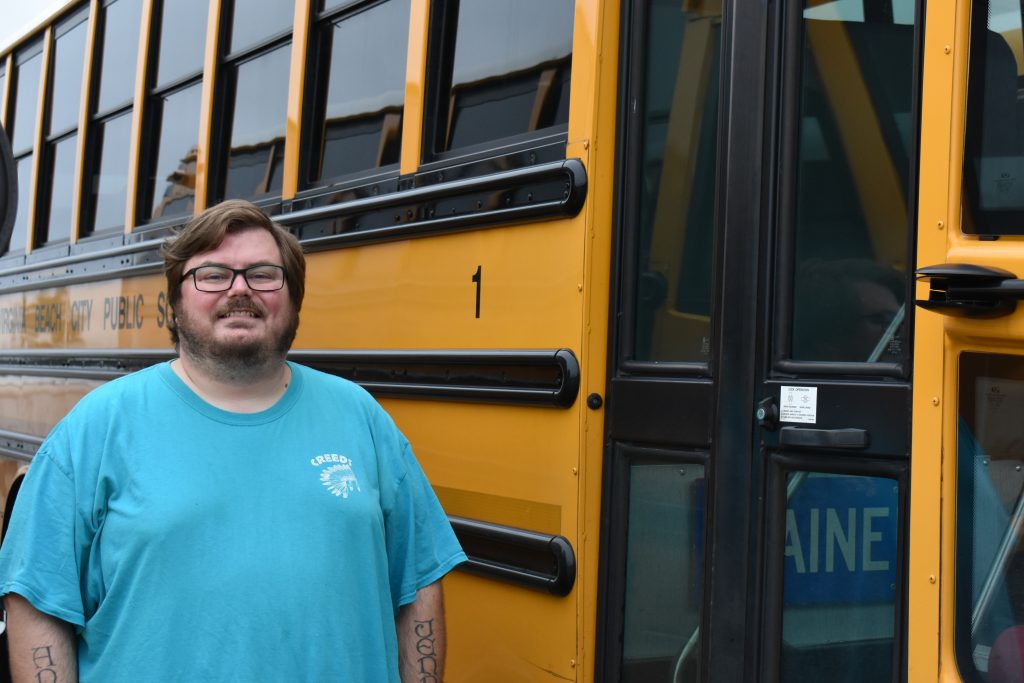 The school system needs drivers. Vacancies have tripled year over year, and about 100 more drivers are needed. The transportation office leads drivers through about six weeks of training to get their commercial driver’s licenses, or CDLs.

The district has 510 drivers but needs a total of more than 600 to smoothly transport more than 45,000 students a day, Transportation Director James Lash said. That amounts to more than 6 million miles driven every year.

Drivers who work at least five hours a day qualify for benefits.

“Contracted drivers receive Virginia Retirement System benefits, both personal and sick leave,” Lash said. “Also, they can elect to participate in our VBCPS benefits program which has a wide range of offerings, including health insurance, legal plans as well as optional retirement savings plans.”

If you’re hesitating to apply because you’re worried about driving a bus full of wild, noisy children, Bernard has some insight from his eight years on the job.

“The kids aren’t as crazy as people may think,” Bernard said. “If you greeting them each day and speaking with them, they usually behave. It’s all about how you approach them and your work.”

Bernard’s family has put in 90 years of bus driving so far, and that doesn’t include his wife, Katelyn, who has been a driver for eight years.

His respect for the job goes way back. When he was growing up, he remembers his bus driver comforting him when he was having a bad day. His aunt has been a bus driver for 34 years and his grandmother, Ann Bernard, drove from 1968 until she passed away in 2017.

“I remember asking her if she was going to retire when she had 50 years of service, and she said no way – she’d be driving as long as she could.”

She drove students with special needs, and many of her routes were in the Bayside area of the city.

“She was the nicest driver those students could have,” her grandson said. “And her bus was always kept super clean.”

After serving in the Navy, Bernard pursued an education degree from Virginia Wesleyan University. But when he saw the latest requirements for teachers, he decided to pause his schooling and try bus driving.

“I started this job thinking it would be something I’d do while finishing college, but I kept doing it because I started feeling like the other bus drivers and the kids – we’re all one big family.”

With 64 children on his first bus, Bernard quickly noticed that not all his passengers seemed to know the rules. “But by the end of the school year, I was getting compliments from people saying their kids’ behavior had really improved over the course of the school year. That made me feel really good because I knew that the students were listening to me.”

Today, Bernard and his riders bond over Pokémon. He’s young enough to have watched Pokémon shows on TV when he was growing up, and the kids say they’re amazed he knows many of the characters.

It’s heartwarming to wave to other drivers when their buses pass each other on the road.

“There’s a sense of pride to riding these buses,” he said. “They’re big and yellow, they stand out.”

If you’re still on the fence about applying, here are some other advantages to the job: