Gina (Giordano) Byrne has been writing stories for as long as she can remember. The gifted resource teacher at Providence Elementary School says getting a book published has been something she’s dreamed about since childhood. In May, her first book will be released. 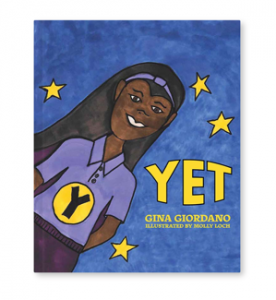 “I feel like I’ve been walking on air. I tell my students that this is something I’ve always wanted to do, and now I’ve done it. So dreams really can come true!”

Byrne recalls waking up in the middle of the night about three years ago. She had an idea about the power of positivity in a negative world. That story has become Yet.

Fifth grader Cali Carr got a preview of Yet.

“It’s about a superhero named Yet,” she says.

“Who tries to save the world from negativity,” adds third grader Claire Connolly, whose mother read the book to her.

That negativity is centered in Negatropolis, and perpetuated by Naysayers and the Not siblings, Can Not and Will Not.

“Sometimes it’s hard to not be a Not, because we all have those days when we’re negative,” says Byrne. “But we have to remember and listen to our inner Yet: ‘I haven’t done it…yet.’”

Cali could relate to what Yet was up against in Negatroplis.

The illustrations are the work of another VBCPS educator, Molly Loch, an art teacher at Virginia Beach Middle School and Green Run Collegiate. Loch credits her daughter with helping her envision the superhero Yet.

“She was the target age of the book,” Loch explains, “so I had her help me design a character that could engage kids’ visual interest. The rest of the characters were also developed to represent a diverse group of people.  I want everyone to see themselves represented in Yet.”

Megan Bilger, a fourth grade teacher at Providence, read the book to her class and feels that it’s a great example of an effective social and emotion learning tool for students.

“Mistakes are the way of learning. We need to learn from our mistakes,” she says. “This is showing a superhero coming into their lives when they need to hear that it’s OK to make mistakes, and it’s OK not to get it the first time and be perfect.”

Yet is appropriate for those aged 4 to 104, Byrne says, and she promises that there’s a little sarcasm and humor in there for the adults, although she’s surprised by how many of the children are catching the jokes. She’s also thrilled with how her students have embraced Yet’s message, especially one of her third grade classes.

“Everything they say has ‘yet’ in it,” she says. “They will find a way to weave that word into it, no matter what. It’s almost like a game to them.”

Even though she thought of Yet before COVID-19 hit, Byrne believes the story is relevant now more than ever. “There’s been so much negativity in the world lately,” she says. “The message that this book gives out kind of gives everybody hope. Everything will be OK. We just have to have the right mindset.

Yet is available for preorder through Mascot Books and will be available via other booksellers in early May.

Meantime, a sequel is already in the works. But, Byrne smiles, “I haven’t started to flesh it out…yet.”

–by Svetla Tomanova A child’s education begins at birth and giving parents the support they need could be vital. The Parent Support and Information Center is a resource of the […]

–by David Schleck Chris is flying high at Happy Day Café. After preparing his favorite breakfast items, he rolls his cart down the office hallway and greets customers with a […]