Approximately 650 Virginia Beach City Public Schools (VBCPS) buses are on the road each school day, transporting thousands of students to and from school.

In order to greet all students at bus stops on the first day of school, the division needs bus drivers to join its transportation team.

“We have training classes weekly this time of year in order to ensure we have enough drivers to cover routes,” said Cris Sprouse, an area transportation supervisor. “We also hire drivers, assistants and substitutes all year.” 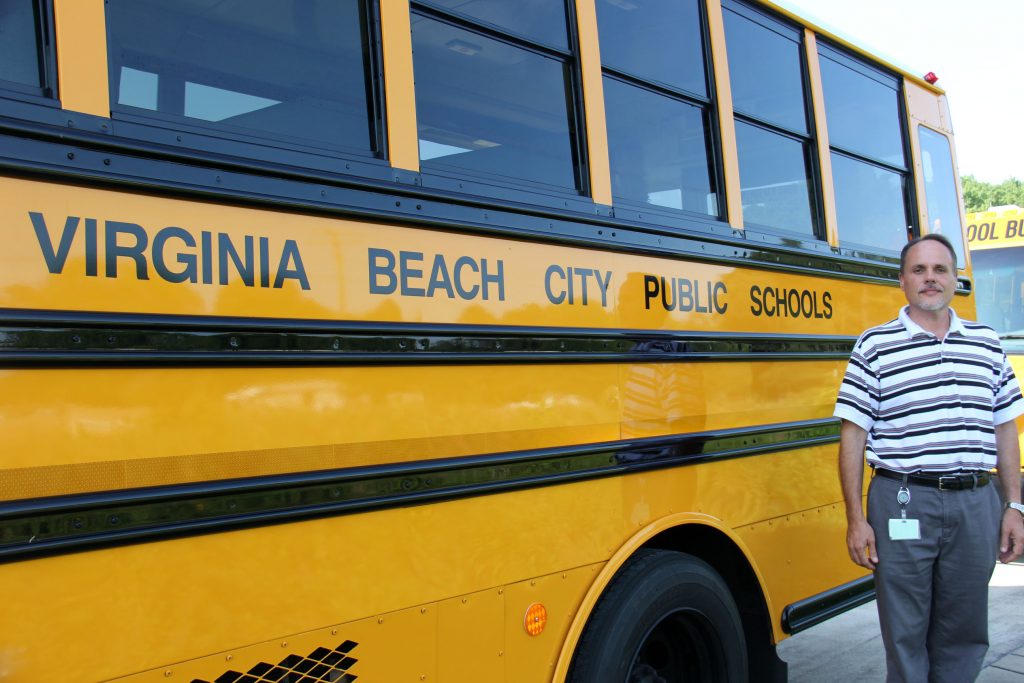 After submitting the online employment application available on the division’s website, individuals are contacted by transportation services staff to attend required school bus training, which includes both classroom and behind-the-wheel instruction. Applicants who successfully complete the training and secure a Virginia commercial driver’s license are considered for hiring.

Flexible hours, full benefits and free weekends are some reasons school bus driving appeals to a wide-range of people, according to Sprouse. He said retirees, college students, single parents and part-time workers have found it to be the perfect job. A better question, Sprouse said, is “Who wouldn’t like it?”

Meredith Lawler had never even considered it.

“I never thought of bus driving before. Never,” she said.

Lawler was working in management and sales when she became a single mother of two children under the age of 3. Day care costs consumed most of her paycheck so she began looking into other career options last year.

“I was shopping around for a job that really fit what was going on in my life and was having no success because the cost of day care. I had to offset that and make money on top of it.”

Someone suggested school bus driving because drivers can bring their children, ages 1 and older, on the bus.

“I didn’t really know how that would work for me. I love it. I absolutely love it,” said Lawler. 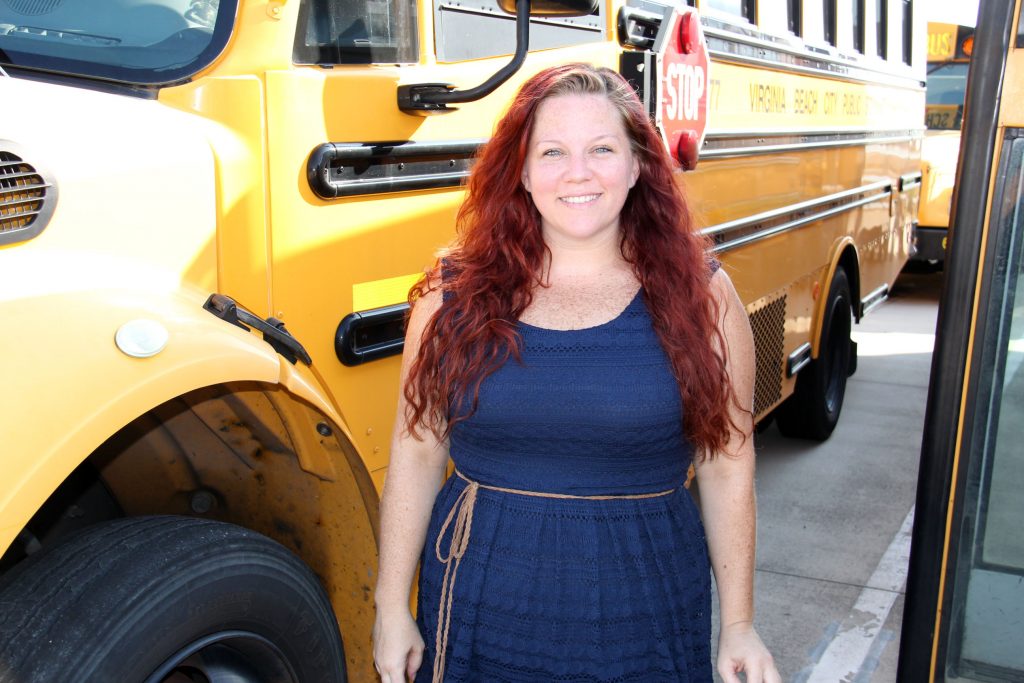 “It was actually an easier transition than I thought it would be,” Lawler added, “and I like the fact that you get to help students or brighten their day when maybe they were having a rough day. That’s rewarding. It’s instant gratification. It’s actually the best job I’ve ever had. There’s really no stress about it.”

No stress? What about driving around dozens of students and navigating a bus through traffic and neighborhood streets?

Lawler followed a few simple rules to manage it all.

“The first day, just stop the bus just for a minute, introduce yourself, let them know these are the rules, and then be consistent on that,” she advised. “I say within about two weeks, they get it. You may have to occasionally to tell a student to sit down or you may have an issue every now and then, but it’s actually manageable…Really, it just has to do with how you set the tone from the beginning. I talk to them like an adult, in a respectful manner, and they respond well to it.”

Driving the bus is also easier than people think, said Lawler. Her compact SUV was the biggest vehicle she had driven before getting behind the wheel of a school bus.

“It was more comfortable than you would assume it to be. I actually prefer driving my bus over my car; the visibility is great,” she said laughing.

“It was an adjustment learning the mirrors,” Lawler continued, “but once you get the mirrors down, it’s really easy. It really is. For people who are intimidated by the bus, they shouldn’t be. If you can drive a car, you can drive a bus.”

Sprouse and his fellow transportation services supervisors hope other job seekers will see the opportunity in school bus driving as Lawler has found and will apply to join their team.

“For a lot of people, it’s just the day care piece alone. Some people work for insurance because their families need benefits. Retirees find themselves bored and need something to do. They can work a couple of hours in the morning and a couple of hours in the afternoon. They can still do their vacations and travel when they’re off because it’s so flexible. They like that.”

School bus drivers also like another aspect of the job.

“The students,” said Sprouse. “Within one week they are calling them ‘my kids.’ Just like a classroom teacher, they become yours.”

Lawler agreed and said her own children, ages 1 and 3, also were close to her bus riders. 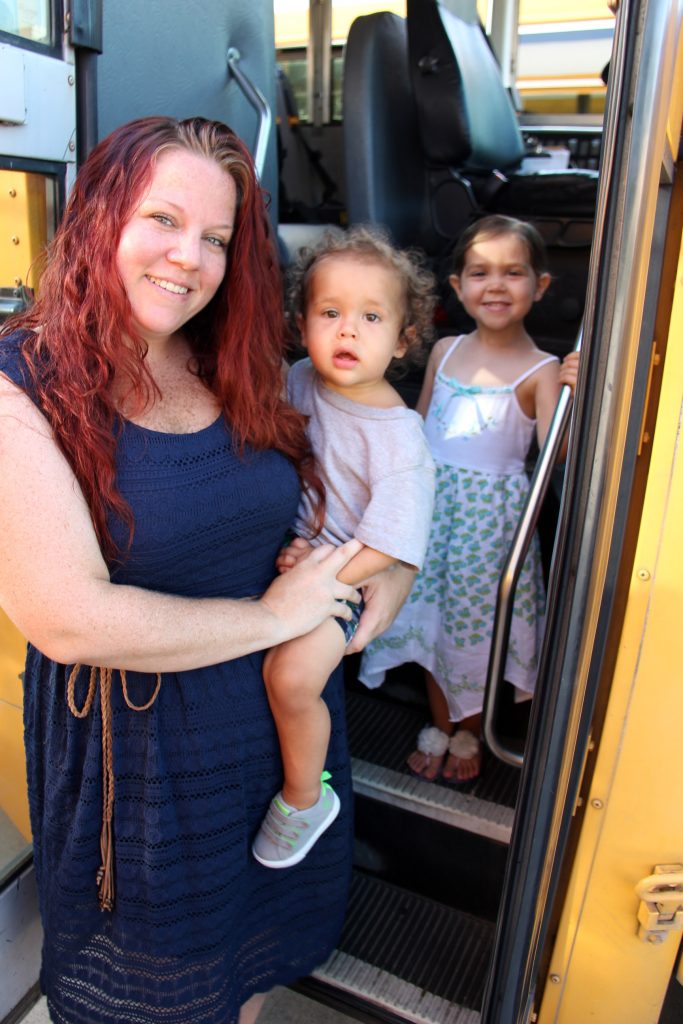 “My daughter made really good friends on the bus. She would get really upset when they would go to school and she couldn’t go with them,” Lawler said. “And the students actually respond well to both of them and feel connected to them. I actually think the students respond better to me when I have to discipline them because they look at it as a motherly thing.”

Being a mother and finding work-life balance is what led Lawler to bus driving and it has been life-changing, in addition to providing her with more take-home pay than when she was working in management.

“I would get home [from my previous job] and I would be so exhausted because the job drained me. With this, I’m not drained and my kids are with me. I know that they’re taken care of,” said Lawler.

“I get my weekends and I get holidays. I’ve never had a holiday off in management, especially working in sales. You get the day of Thanksgiving and Christmas. So I get to spend holidays with them and I get to be that active parent where I’ve never had that ability before.”

She also appreciates her new colleagues as well.

“You meet so many different people from so many different backgrounds. We all pretty much agree that this is a really good job. I know people see it and make the assumptions of everything they’ve seen through media sources, but if they actually talk to bus drivers, they’d find out that we’re just working people like they are.”

Individuals who are interested in more information about becoming a VBCPS bus driver should call 757-263-1545 (extension 1) or email cris.sprouse@vbschools.com.