While sprinkling the finishing touches on array of scrumptious-looking salads, including a bed of mixed greens with grapes, roasted beets, and feta cheese topped with a drizzle of honey ginger vinaigrette, the school division’s new chef Kip Poole described with excitement the future of scratch cooking in Virginia Beach City Public Schools (VBCPS). 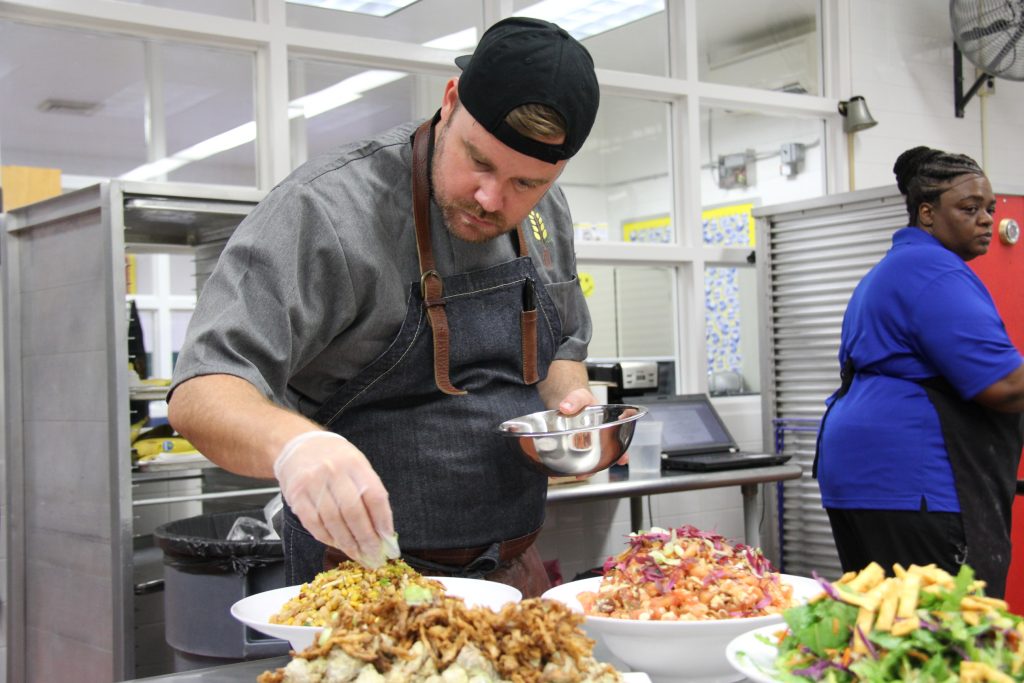 Poole was hired this summer to move forward the division’s vision for scratch cooking. Last year, the division piloted a scratch cooking program at Old Donation School which was well received and even inspired students there to carry out a “Top Chef” competition at the end of the school year.

Now, the division is moving forward with replicating that success, but expanding to all 83 school cafeterias requires a plan.

To ensure that consistency is not lost from school to school, Director of Food Services John Smith said that this school year Chef Poole and his team of lead bakers and a cooks, who were also hired this summer, will train cafeteria staff and work on recipe development.

“Chef Poole is working on skills needed by our workforce,” said Smith, who in addition to being a former school principal was a restauranteur in his earlier career and managed a number of restaurants.

“He will be working with kitchen staff on lessons you would need in cutlery, baking skills, and all those different things that go with kitchen operations.”

This past year, the school division’s Food Services also implemented a career ladder, adding manager-in-training and assistant manager positions similar to what is in commonplace in the private sector.

Though the team is focusing on training and recipe development that doesn’t mean students won’t get a taste of this innovation this school year.

“We hope to field test food items much like we do when we bring in a new product,” Smith said. “In the second semester, we might see something like a chef’s special pop up or possibly do limited-time offer items that we can push down to schools on special weeks.”

The school division already takes that approach when considering new items to introduce in menus.

“I’m hoping for a good biscuit for breakfast,” Smith added, which would give kitchen staff the opportunity to test their new skills.

Although Poole and his team will be testing recipes out of the Landstown elementary and middle school cafeterias, which were selected because of their large student populations, Smith adds that expanding to a few elementary schools could possibly happen.

“Our big question now is how we are going to expand,” he stated. “Are we going to expand to five or six schools at a time, start them out at one day or move them to two days? We need to see how all this starts playing out. I don’t want to do it so fast that we don’t do it right. It’s a big undertaking for a division this size.”

Poole agrees that doing it right is important.

As a chef, cook and general manager for notable restaurants throughout Hampton Roads such as Byrd & Baldwin and 4-5-6 Fish, Poole knows the importance of consistency.

But it’s not just consistency in restaurants that is inspiring his passion.

His most recent job was working for a Delaware-area high school where he launched a culinary arts program for low-income students. There, this Virginia Tech alumnus who earned a bachelor’s degree in restaurant management followed by a master’s in education grew a program that was handed to him with 30 students and a kitchen.

“We started selling food and from there it turned into a little restaurant where we started catering and were booked two years in advance for weddings. This was all high school Title I kids. They were cooking the whole thing,” Poole recalled.

They were also doing pop-up restaurants and turned the school’s agriculture program into a seven-acre farm.

“Our students were planting, watering, feeding, harvesting and bringing it back to the kitchen doing farm to school to table cooking. I did that for about seven years. I’m very passionate about helping kids.”

And helping students he did, even starting a foundation which funded $45,000 in scholarships in a four-year period.

“They reached out to me and said, ‘Would you like to be on the show’ and I said, ‘Not really, but I have a lot of students who would want to be on it.”” That landed one of his students on the show. Poole eventually did agree to appear but, again, he did it for his students.

“I did it to help the kids so if I did win, it would go right to them,” Poole emphasized. “Unfortunately, I came in second.”

“I’m super excited about everything that is going to happen. Once we get the two big things, which are the recipe development and staff trained, the sky is the limit. Who knows, students might be growing their own lettuces, spinach, onions, potatoes for their own scratch cooking cafeterias. We want students to get excited about school lunch.”