November, recognized as Military Family Appreciation Month, is the perfect time for students to begin working on illustrations for the school division’s annual Art of the Military Child art contest. Open to all Virginia Beach City Public Schools (VBCPS) students, the contest features artwork related to being a military child. 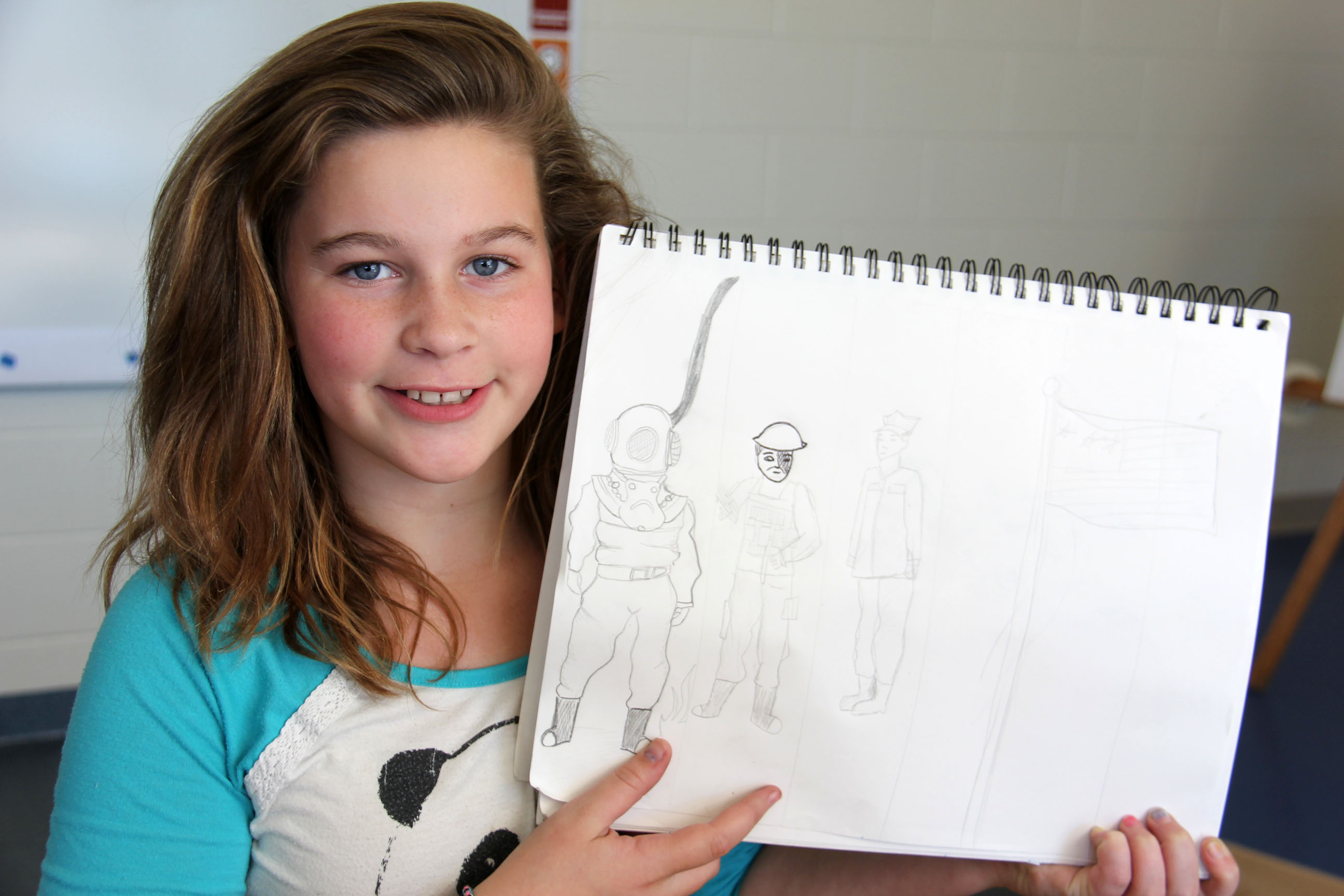 “I said that because they deserve a lot of recognition. Like other stars, they are not in Hollywood,” said Stradling. “The artwork is dedicated to my father and all the other people in the Navy that work very hard and have to be away from their families for a while.”

Stradling’s work features a U.S. Navy deep sea diver to represent the work of her father.

“I want to be a deep sea diver too, because I want to follow my father’s path. I’ve always loved swimming,” she said.

Jonathan Calhoun’s dad is also the inspiration for his Art of the Military Child entry.

The Bayside Elementary third-grader explained, “He’s just become a Chief Petty Officer so I have the United States Navy symbol that he wears on his hat and on his pin, and his division, the Greyhawks.” The eagle in the background is there “to represent America, not just the USN,” he added. 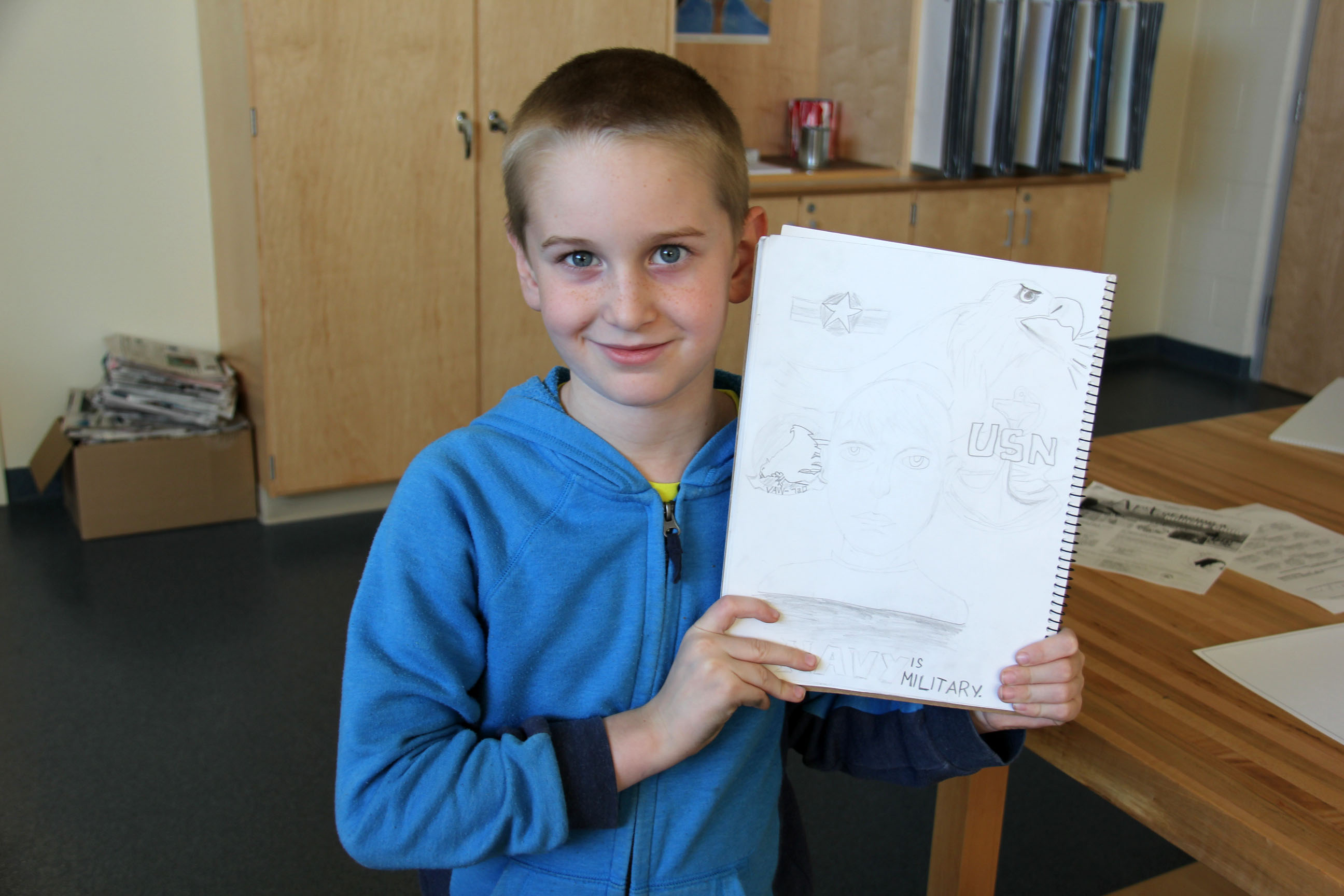 Calhoun and Stradling are among the students from schools citywide in Leigh Drake’s gifted visual arts class at Old Donation School. It’s an art project that Drake incorporates in her lessons every year.

“I think it’s important,” she said. “I know a lot of our students have military backgrounds and they deal with the deployments and the heartache. It’s an emotional thing. I think with that and the connection with art, they can create emotional, powerful pieces visually rather than through words. I think that’s something great for them.”

The connection is not restricted to military dependents.

“A lot of students have dealt with the heartache of losing friends who have moved or they know what their friends are going through,” said Drake.

Kevin Dison, a third-grader at Christopher Farms Elementary, is illustrating a scene from his friend Jeremiah’s life. 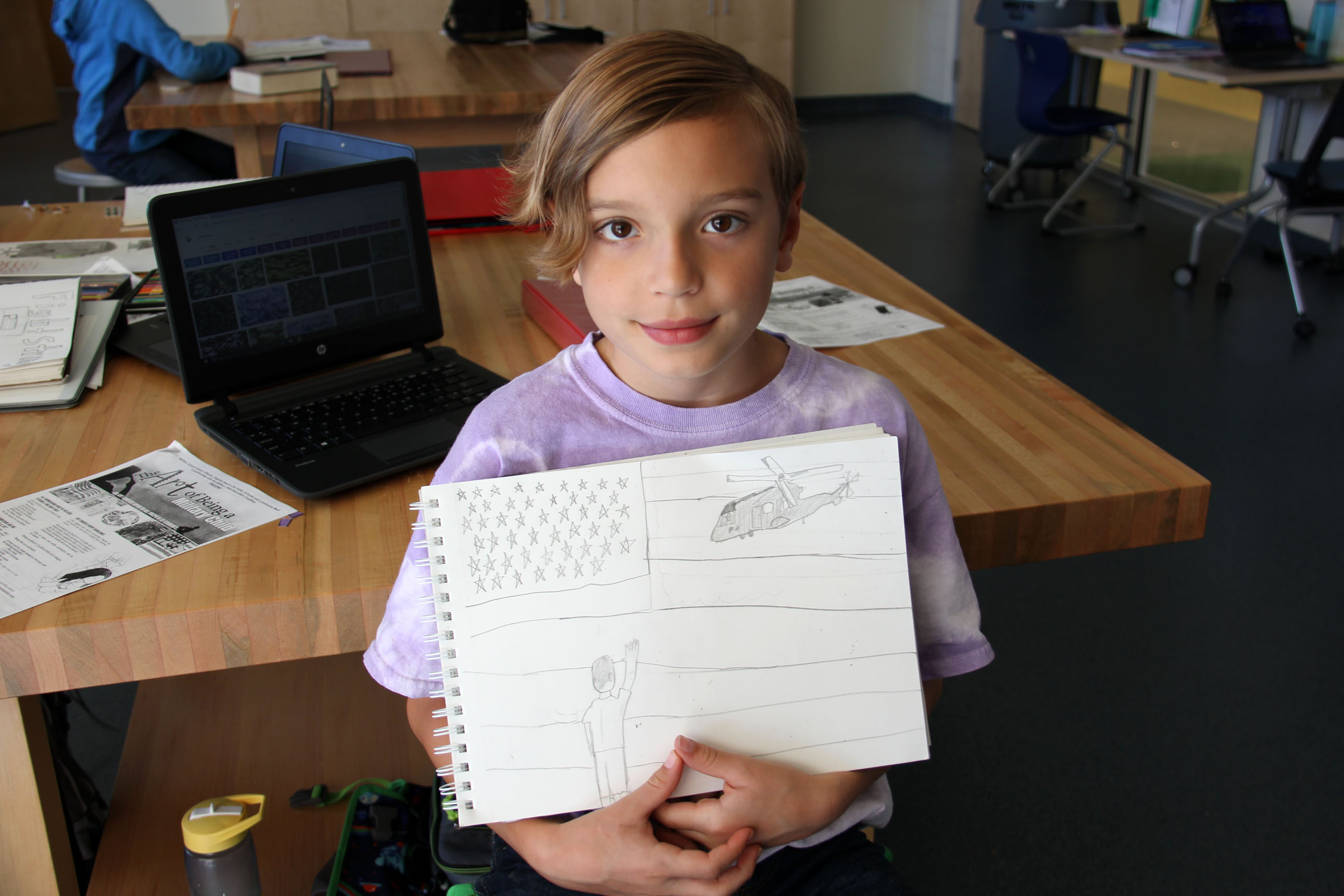 “This is my friend waving bye-bye to his dad in the plane. He’s a little sad because his dad is leaving.”

Likewise, Kempsville Meadows Elementary fifth-grader Jayden Yoon remembers being nearby when his friend called his mom who was deployed overseas to Japan.

“I just drew a picture of him calling his mom and, on the other side, I’m going to draw his mom talking to him.”

Military deployments are a common theme for art contest submissions, like the completed piece Drake shared which featured a handwritten message in the corner.

“Some parents come home at night but mine is too far to do that. That’s OK. He’s still here with us and I know it,” wrote Kaitlin Salazar-Mesina, Pembroke Elementary third-grader, in her artwork featuring people holding American flags and sitting near a tree with a yellow-ribbon tied around the trunk. 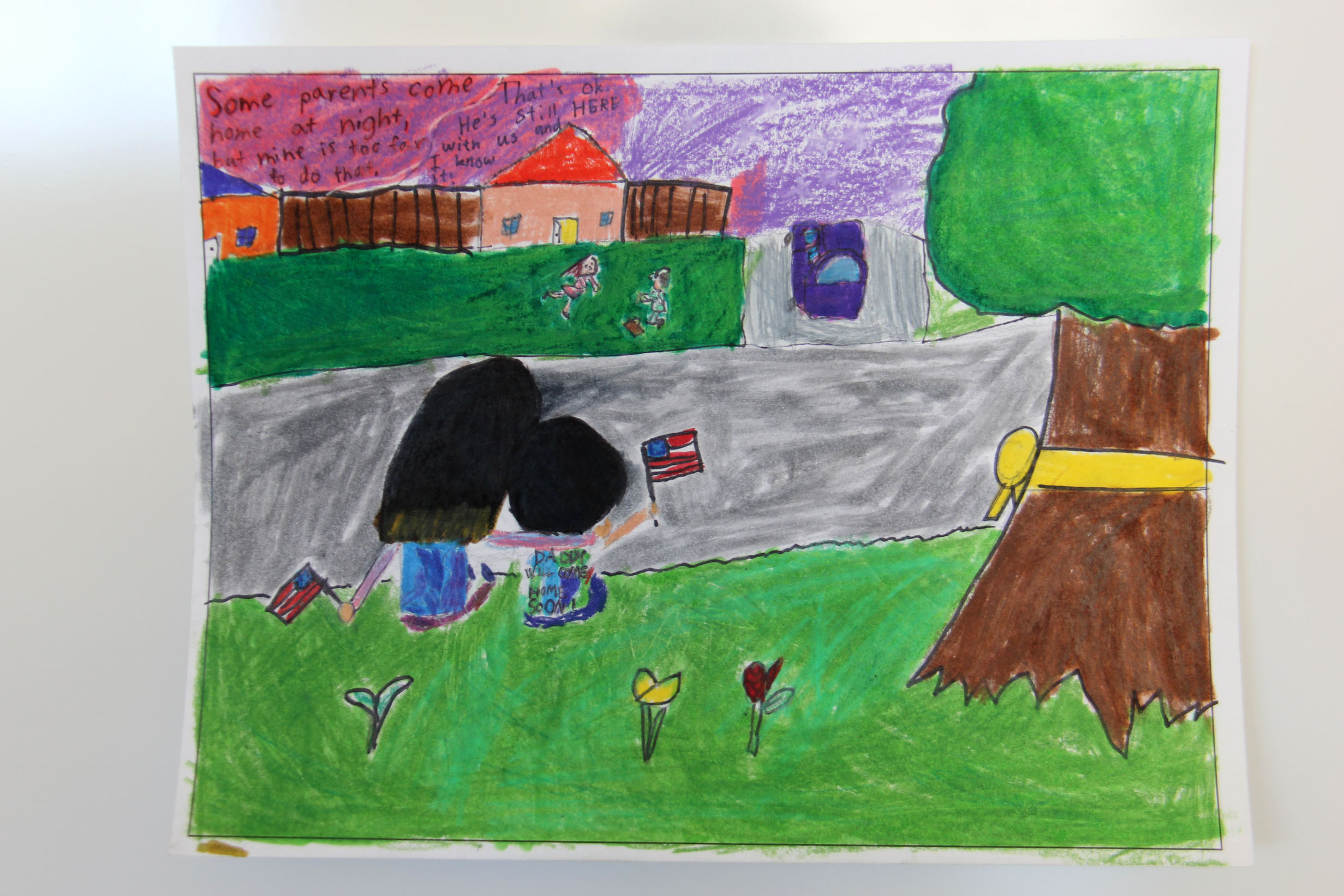 In the artist statement accompanying the artwork, Salazar-Mesina described what the piece means to her: “I did this piece because when my dad was deployed, I felt like I was completely petrified. Then I read a book that a girl felt the same exact way! Then I learned that when someone you love is away from you, they’re still inside your heart. Whenever I look at [this piece], it reminds me my dad is with me.”

Holland Elementary third-grader Eunice Manlangit also thinks of her father often when he is at sea as a chef for the U.S. Merchant Marines.

“My drawing is about a girl crying because her dad is in the military and he is away. I added these lines to make it seem like she’s thinking, like memories. There is a picture of her dad, of her and her dad, and this is a picture of all the places her dad has gone,” she said pointing to the globe marked with X’s. 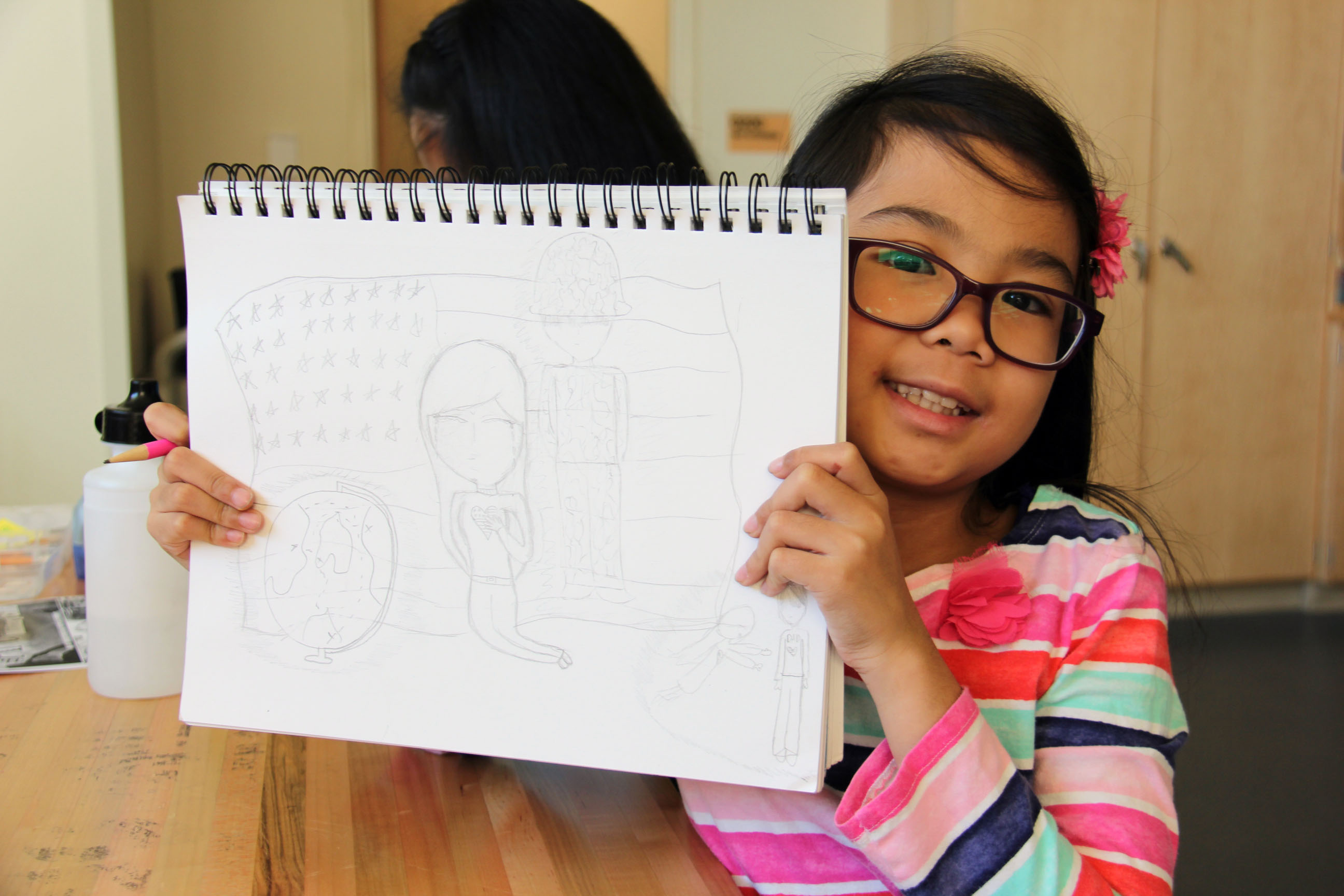 Each year, Drake is struck by the emotions the art project evokes in students.

“Especially at a young age, for them to be creating such powerful pieces and having that connection to it, they surprise me. They create successful pieces every year,” she said. “I wouldn’t have known it’s such a deep connection and all that pain from behind is brought through with their artwork.”

Entries to the Art of the Military Child art contest are reviewed by judges, and winning artwork and other select pieces are displayed at Lynnhaven Mall throughout the month of April in recognition of The Month of the Military Child. Entries may also be selected for submission to the Military Child Education Coalition, a national organization that features student artwork in their publications and on their website.

The public art exhibit in the spring is an aspect of the contest Stradling likes because of what it conveys to military servicemembers.

“I think every student, whether they are connected to the military or not, should enter the contest because a lot of military soldiers come in and they get to look at your art and they’ll be very happy that everyone supported them. It’s worth it because of how hard they work to keep America an awesome place. Without them, we wouldn’t be America: The Land of the Free; we’d just be America.” 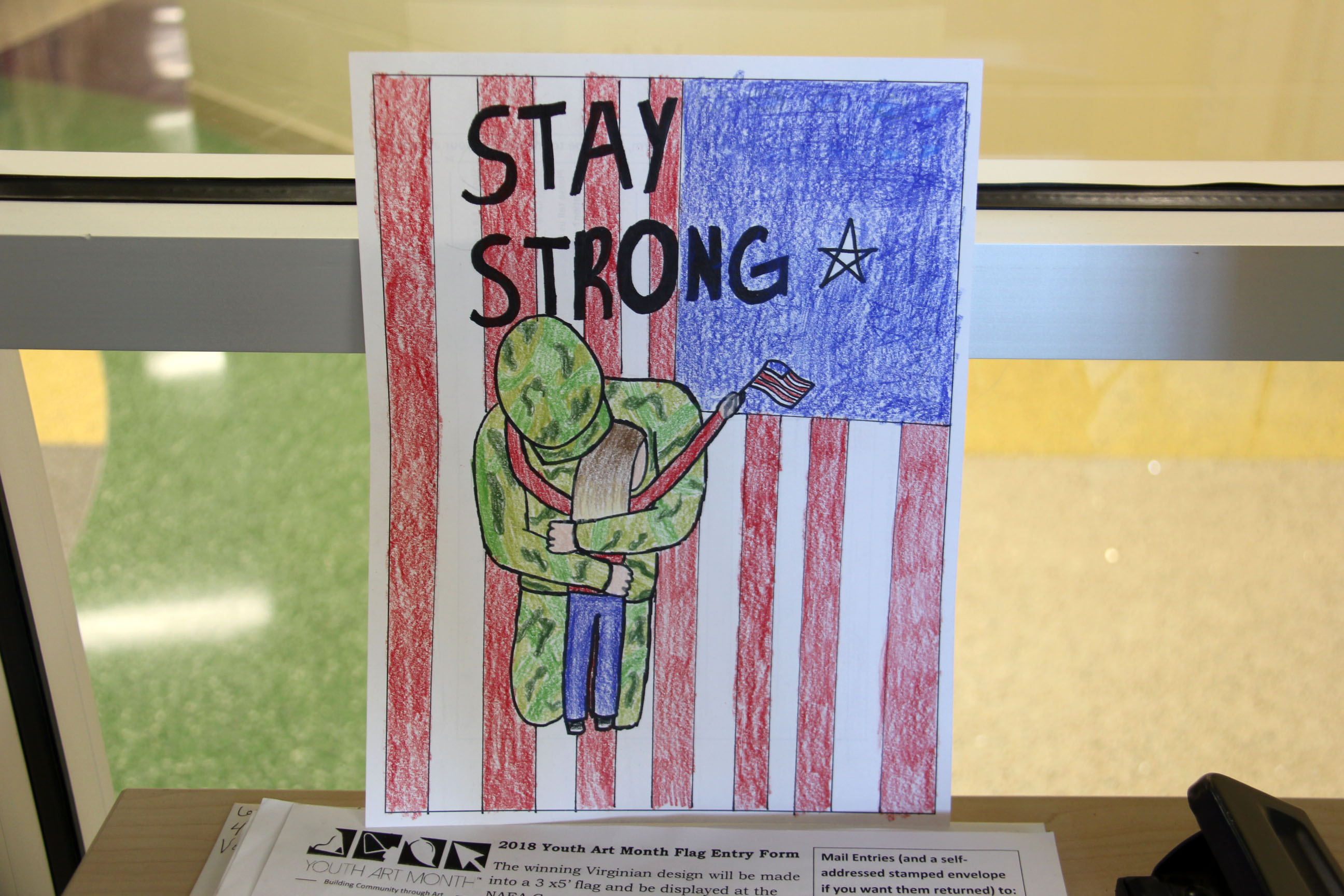