When Madelyn Baldwin was a junior, two seniors in Kellam High School’s drama department recruited her and a friend for a new role. It was not one they would perform on stage, rather, it involved more work behind the scenes.

“We’re all for it. Let’s do it,” was Baldwin’s response. When her friend moved out of state over the summer, Baldwin, now a senior, asked junior Kaylin Dinsmore to join her in the new endeavor.

The graduating seniors’ request was for Baldwin to continue an independent study with Kellam’s theater teacher, Tammy Smith, which involves working with students with disabilities in Smith’s introduction to theatre class. In collaboration with the special education department, a small group of students with disabilities is identified to participate and become stars of the stage, directors, sound technicians and more.

“They’re getting the experience and exposure to a regular class and regular kids,” said Julia Donnell, intellectual disability teacher. “They do the same stuff, but it’s broken down and pretty simplified.”

That’s where Baldwin and Dinsmore come in. 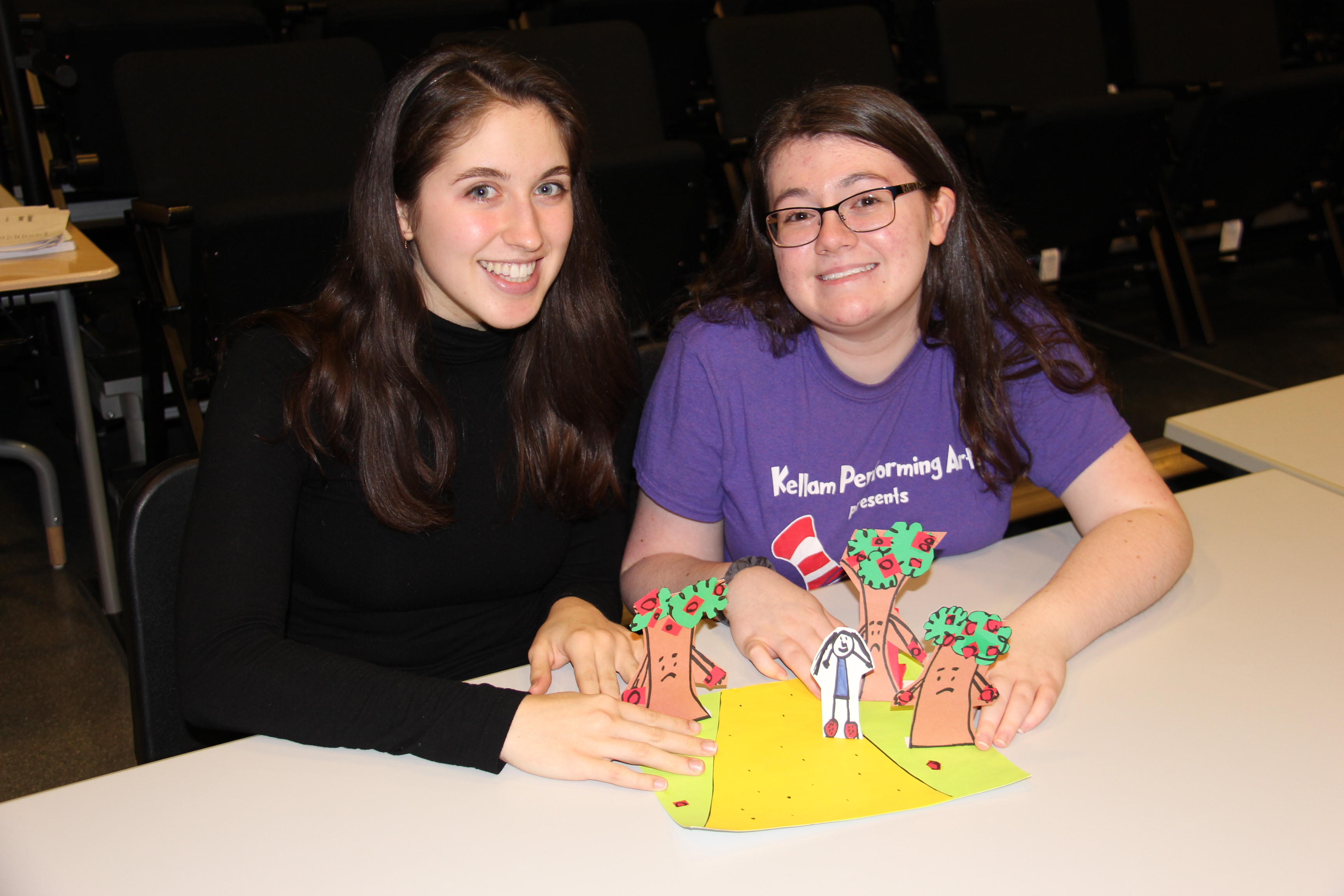 “Both of them have had the introduction to theatre class,” said Smith. “The girls and I will meet and I’ll talk with them about what I’m going to be teaching, and then they take it and do a mini lesson with them. It really depends on what we’re doing. We might all be together for an activity or if I’m going to be lecturing, the girls take the lesson and take a piece or part of it – not try to give them the whole lecture.”

“We adapt it so it will be interesting and engaging for students with disabilities,” Baldwin added.

Set design, improvisation, light, sound, direction, movement are among the topics covered, in addition to daily icebreakers and theatre activities.

“One of my favorites was definitely getting to work on set design,” said Dinsmore. “We gave them a lot of the choices and it helps them to be able to think for themselves. They chose the ‘Wizard of Oz’ and they cut all this out and they made it.”

Another favorite lesson was learning more about the director’s role.

“We all wrote a scene together, which was loosely based off ‘Harry Potter,’ and they all got a turn to be the director,” said Dinsmore. “They got to tell us what voices to have and where to go, and Madelyn and I acted in the scene, too. That was really fun for me because it’s giving them more of a well-rounded experience.” 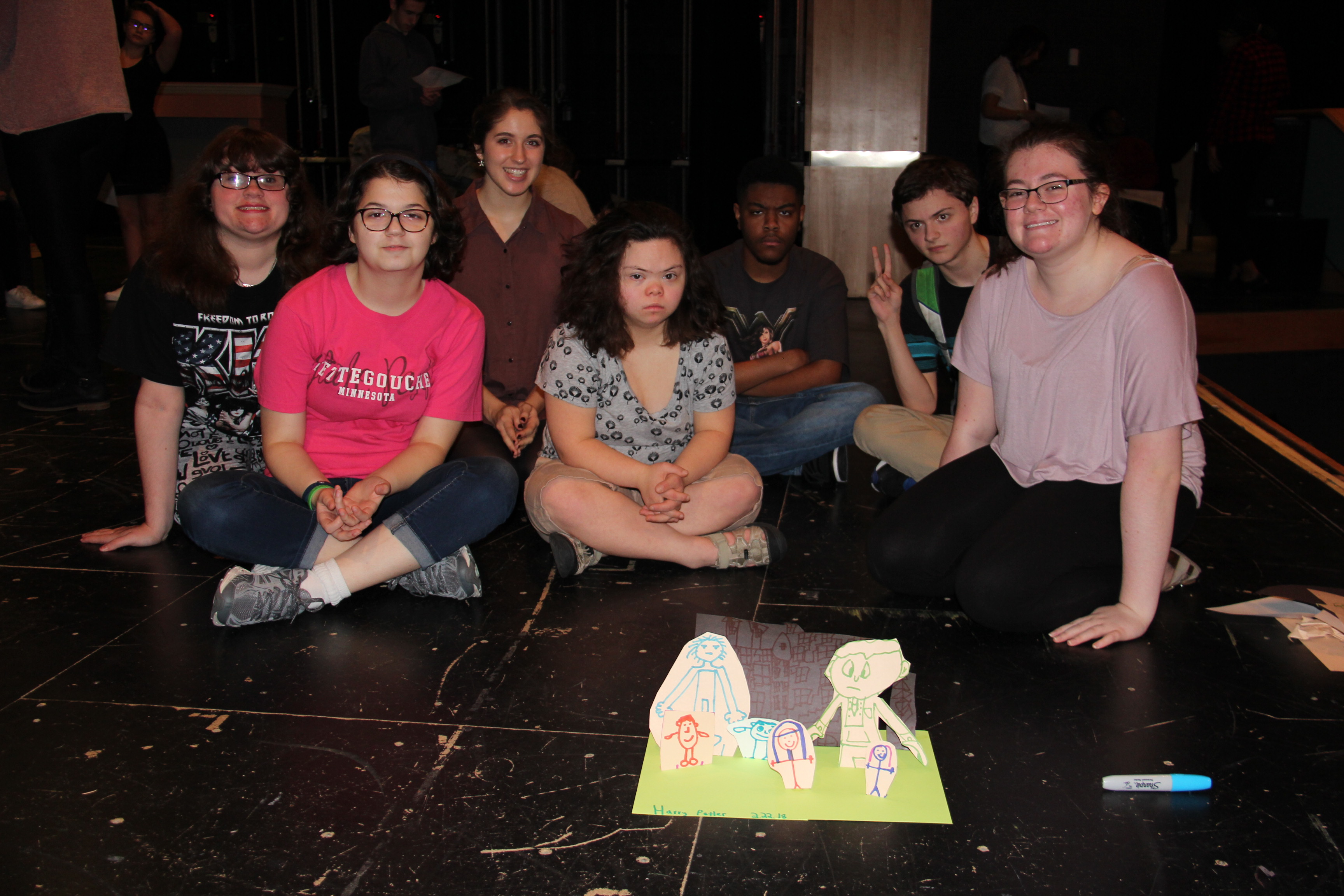 When Smith brought all the students together for a lesson on improvisation, she sought the expertise of Baldwin and Dinsmore.

“The girls have a really good rapport with these kids now and helped me determine who would be best in the class to pair them up with for improv,” Smith said.

Students shined in scenes from ‘Toy Story’ and ‘Star Wars,’ among others, according to special education assistants who are present for each class.

“It was very animated. It was nice to see them come out of their comfort zone a little and open up a lot,” said Tiffany Ferebee. “When they get to act out, they get to have more fun.”

Another assistant, Rebecca Summers, also has seen students blossom in the class.

“Something I’ve seen in Michael, he’s very expressive in this class. He’s in his own world outside of the class, but in here, I’ve seen one of the best actors in the entire class. It’s like he has a home on stage and that’s beautiful to see.”

Summers also noted the positive influence of Baldwin and Dinsmore.

“Jessica, because she likes to talk a lot, some people in other classes find it a little challenging; but in this class, both Madelyn and Kaylin bring out the best in her and they’re so patient with her. And she can be herself in this class, which, in other areas of the school, is not as easy for her to do that.” 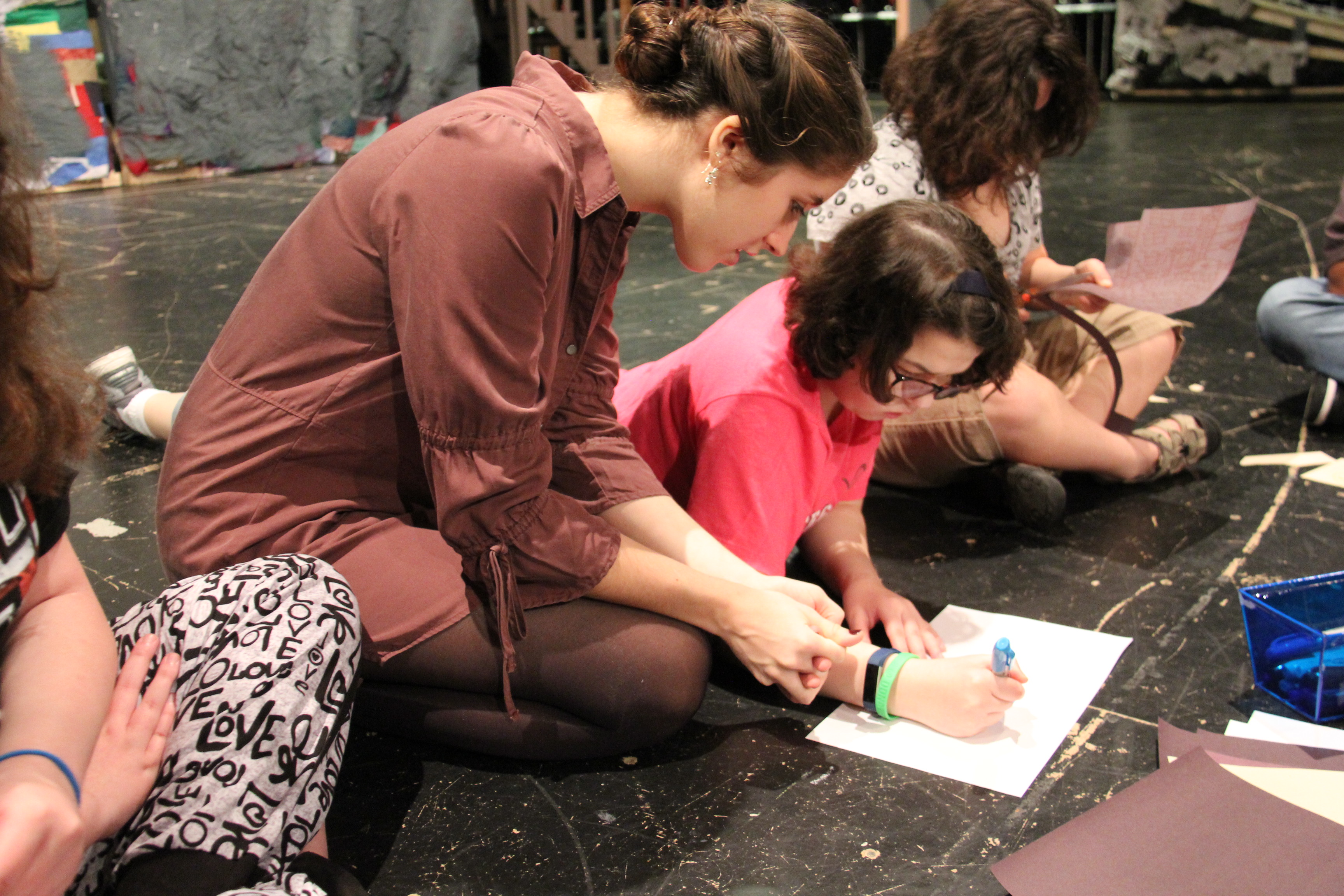 Donnell recalled a breakthrough moment for one of her students in the class last year.

“She wouldn’t participate at all and then throughout the year she came around and came around, and they got to know her and learned she loved the music from ‘Trolls.’ So for her presentation on light, sound and movement, she had a microphone and was up on stage singing and dancing by herself. Oh, my gosh. It brought tears to my eyes.”

Smith is not surprised by the positive reactions from students and observers. “There’s so much that drama can do for students with disabilities and my drama students are so accepting.”

While Baldwin and Dinsmore are the ones helping provide instruction, they have learned valuable lessons from their peers.

“They’ve taught us to look at life in a different way and taught us new ideas about theatre we never would have thought of,” said Dinsmore. “When you’re with your group of theatre kids and your friends, you look at theatre just one way. When you have to teach it someone who doesn’t have the same thought processes as you and your friends, it makes you look at it in a different way. It really helps you broaden your experience.”

“It’s actually become my favorite class,” said Baldwin. “It’s the only class I look forward to going to no matter what because they’re so much fun. They’re so brilliant and they’re so kind. It’s so nice to get a different point of view and they’ve given me that different point of view this year. The ideas they have that are so outside of the box, that I would never think of – it’s given me a new perspective on theater and life.”

One of those outside-the-box ideas was shared when Dinsmore asked students which theatre game they wanted to play near the end of a recent class.

The test of strength is not an activity they’ve used before, but Dinsmore, Baldwin and classmates embraced the idea, with Baldwin taking a turn to try to beat Jessica. 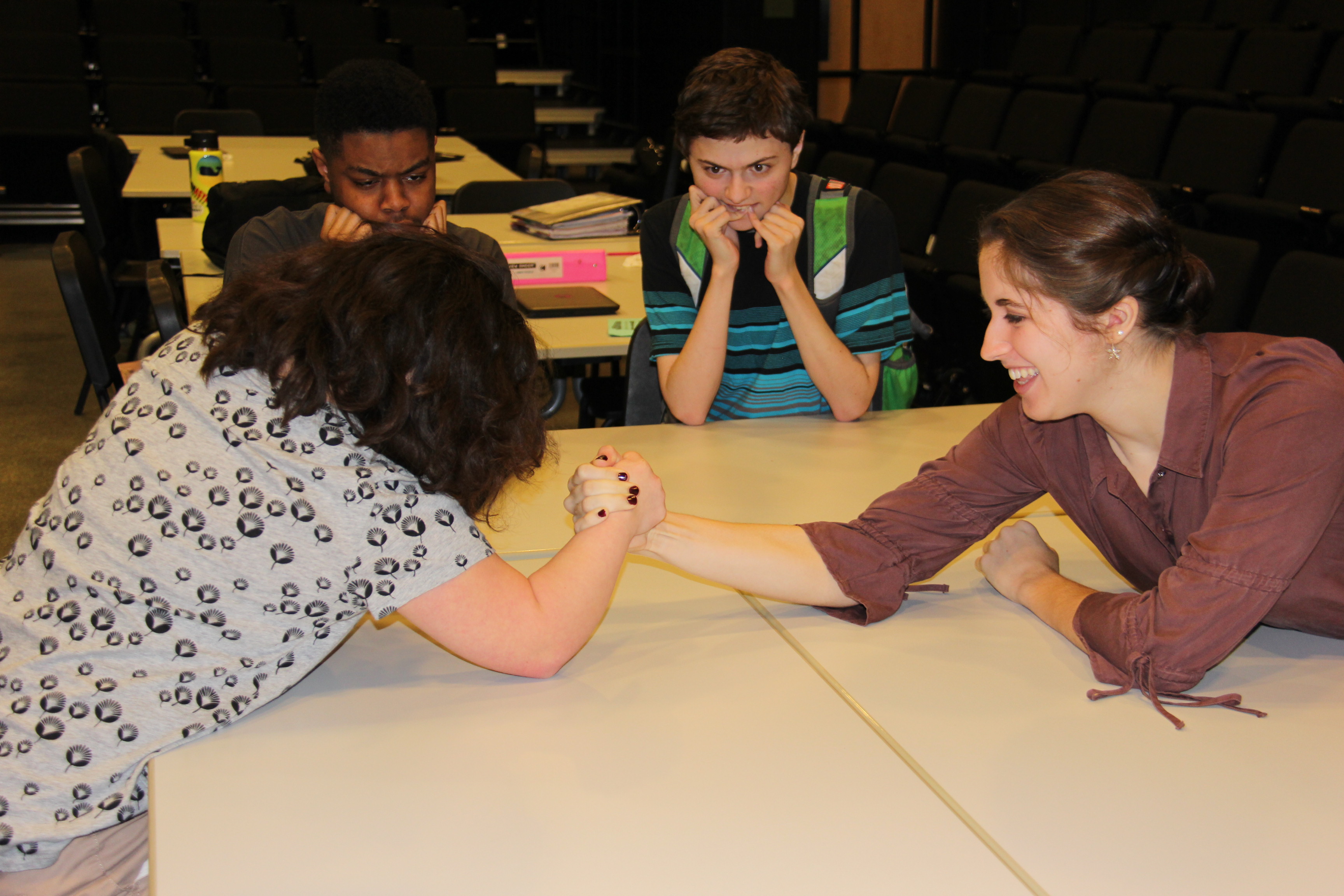 Baldwin who will graduate in June, is happy that Dinsmore plans to continue the independent study during her senior year and will hopefully work with an underclassman who will continue the collaboration between drama and special education.

According to Baldwin, there are valuable lessons to be learned by all involved.

“I feel like a lot of times people are uncomfortable with other people’s disabilities and they’re not sure how to address them and how to approach them,” she said. “Each person is different. Each disability is unique. I’ve learned a person’s disability does not define them, it’s not who they are.”