As John B. Dey Elementary School prepares for its upcoming schoolwide modernization scheduled to begin this June, students’ imaginations are already soaring with ideas for their school’s new playground. 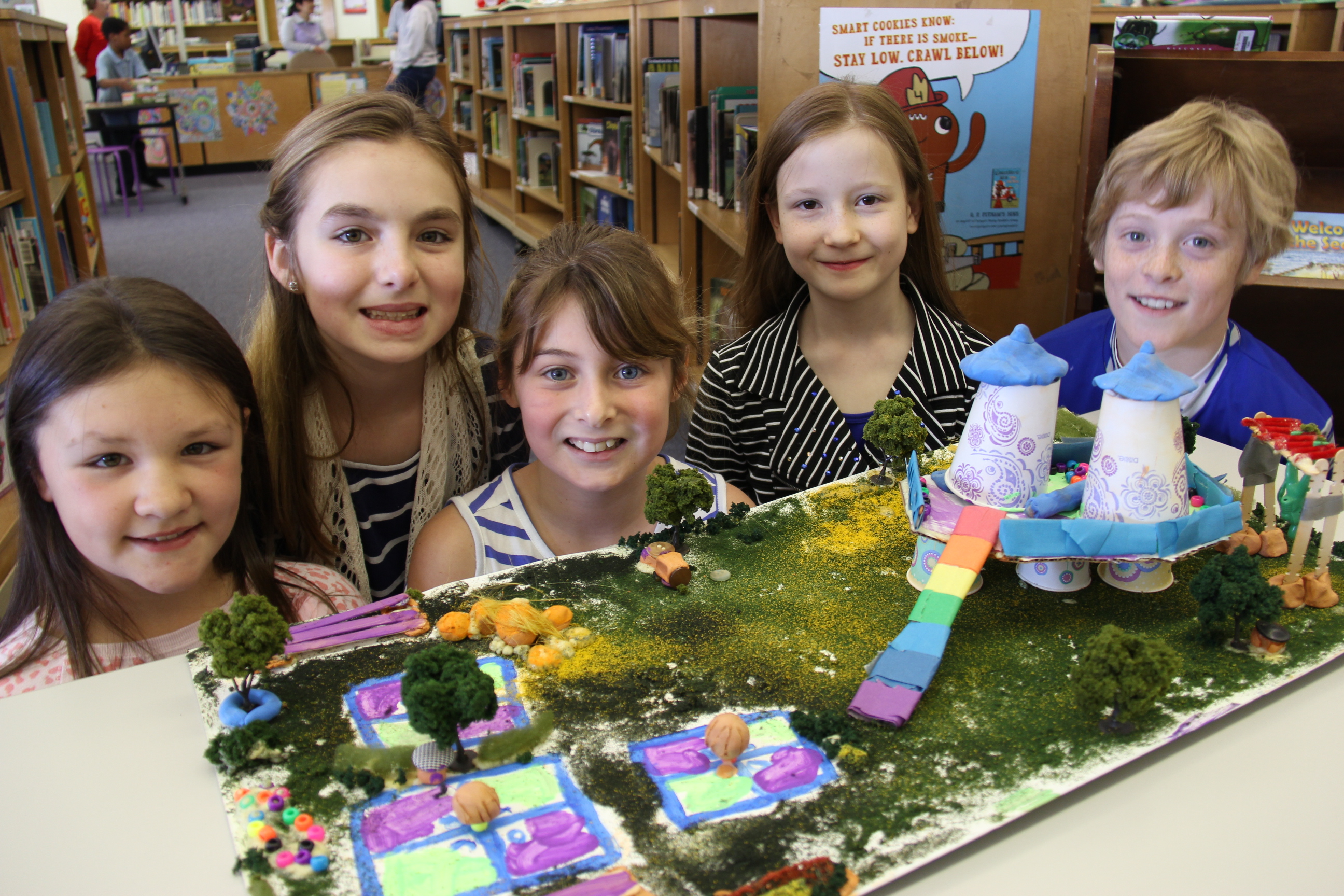 “A lot of the kids liked the climbing walls,” said fourth-grader Ashtyn Ricks.

“You really had to make it fun and colorful,” added fellow fourth-grader Sophia Fisher. 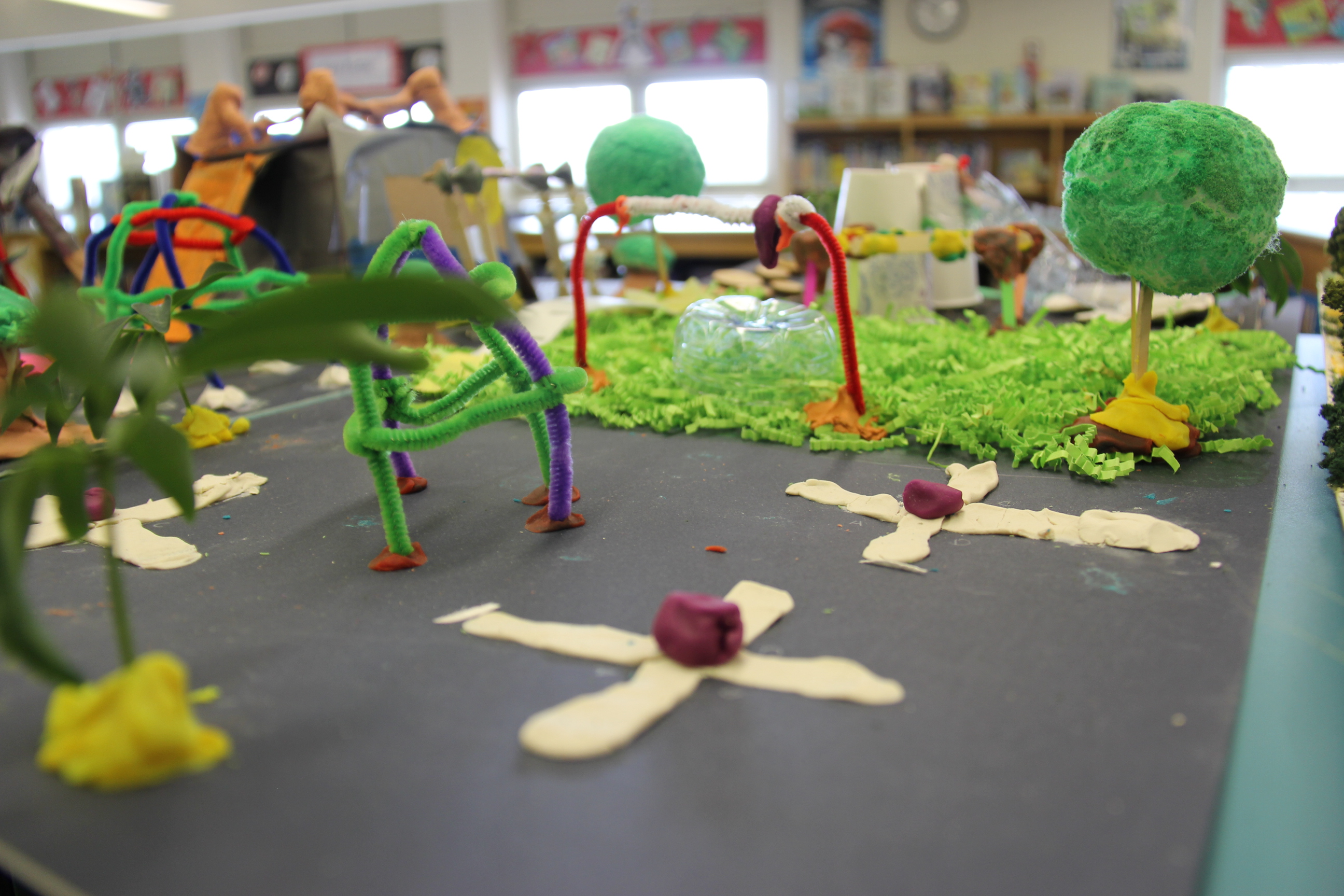 The two of them were describing models they and fellow fourth-grade students designed as part of the school’s science, technology, engineering, art and math (STEAM) projects.

In addition to hosting a family night STEAM Expo which featured many career day speakers, this year the school also gave students the opportunity to design in-class projects to present to fellow classmates during the month of March.

“This was about getting all of the students involved,” said Principal Elizabeth Bianchi.

A few fourth-grade classes decided to take on designing models of their school’s future new playground, one of the projects that will be part of the schoolwide three-year modernization.

“We saw a lot of commonalities,” said fourth-grade teacher Sarita Cole. “They wanted climbing walls and themes. The also cared about us, the teachers. They wanted us to have a watch tower with a shade which they made out of Dixie cups.”

One thing students learned was that designing a playground is not easy.

“It was challenging because all different kids all had different ideas so you really had to come to a compromise to put all your ideas together,” according to Ricks.

In bringing those ideas together, students did a lot of research.

“We studied the history of playgrounds and showed playgrounds from the 1950s to present day,” Cole shared. “They also researched playgrounds around the world, including countries that are developing cutting-edge innovations because of confined spaces.”

As part of the process, students were tasked with thinking through the engineering design process, including identifying problems and brainstorming solutions. 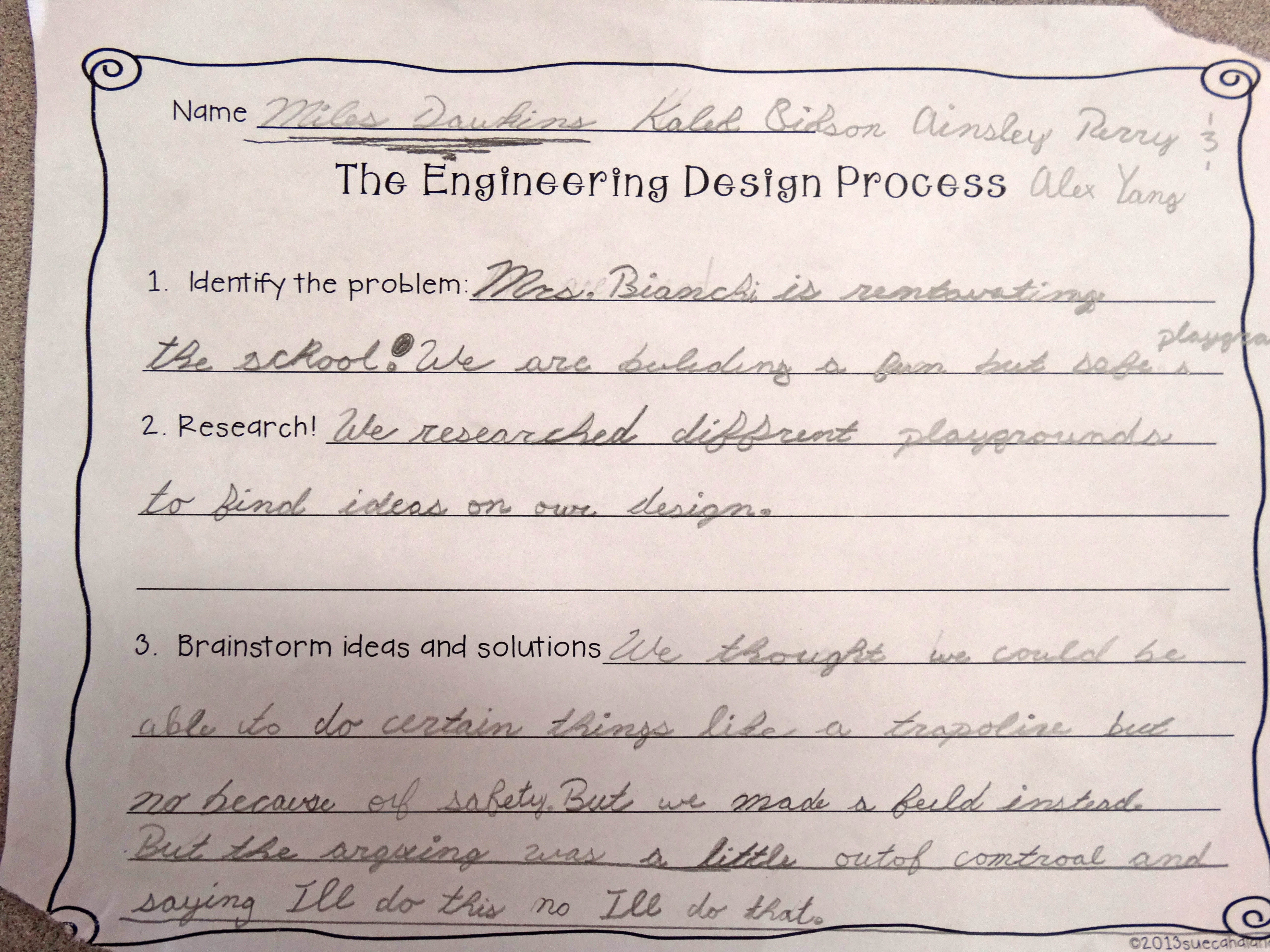 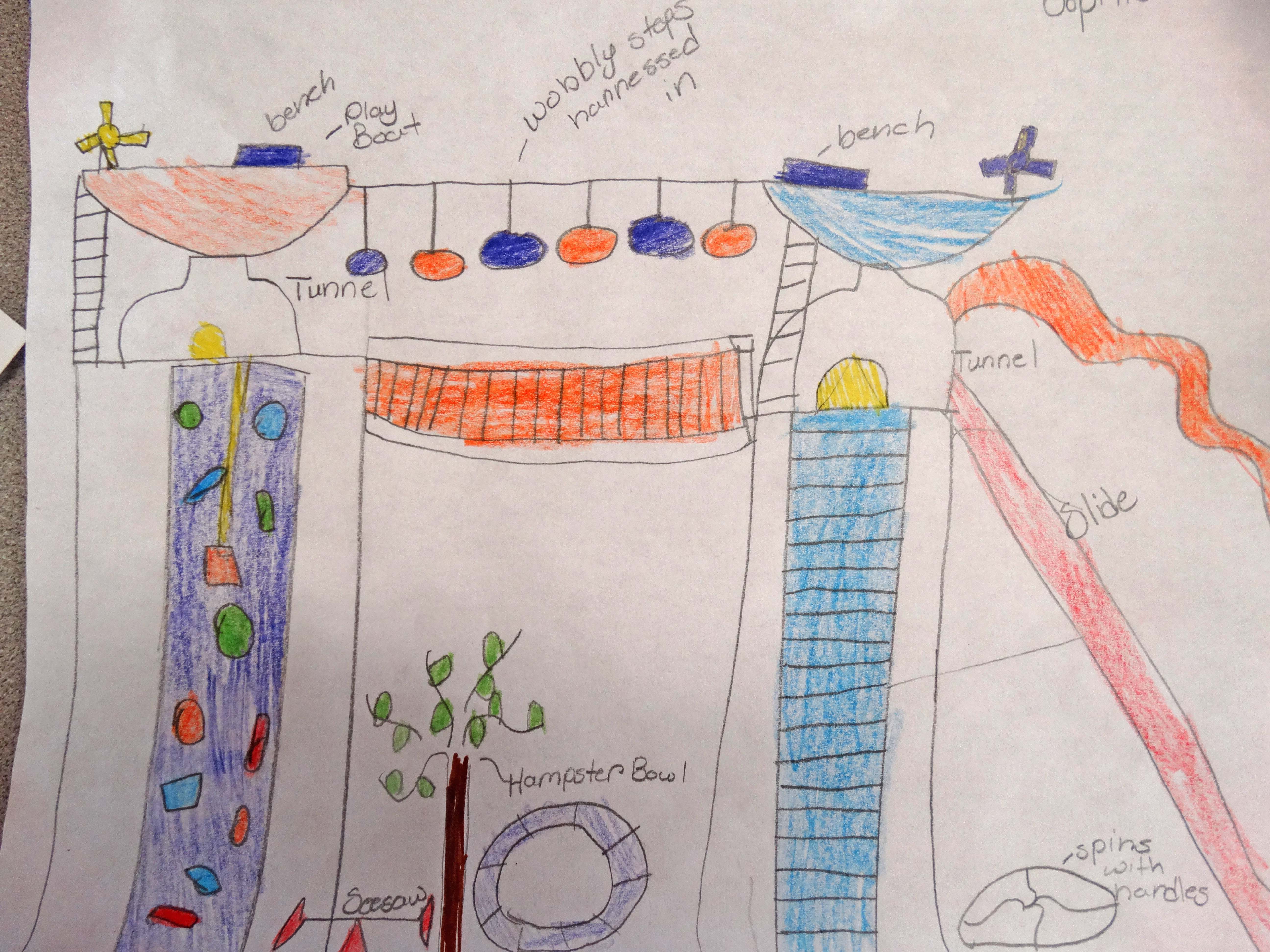 “There were rules like safety issues, so you really had to be careful on what you did but you still wanted to make it fun,” Fisher stated.

While having fun, they were also putting a multitude of skills to work.

“They had to map out the way they wanted their designs to look so it involved a lot of science and mathematical understanding of numbers,” Cole stated. “They also had to use their communication skills when they worked in teams and when they presented to other students.”

In the end, the designs were phenomenal, according to Cole.

Look closely and the playdough that they used to create landscaping truly did look like trees. Colorful twist-ties were made to look like fun climbing domes. They even made tongue depressors wrapped with duct tape to resemble swings. 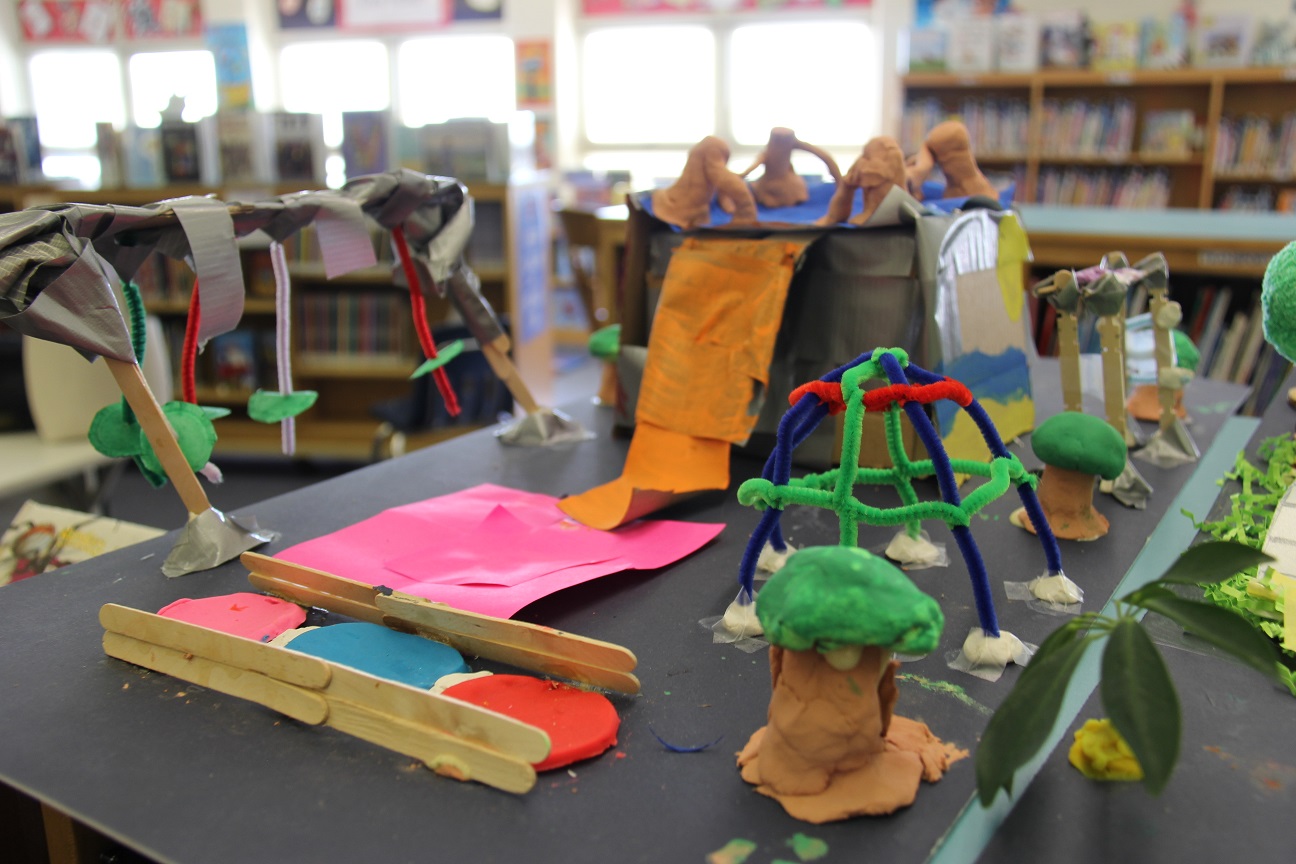 Their designs were so impressive that Principal Bianchi plans on choosing a few of the students to participate in a focus group as the modernization gets underway with the goal of taking those ideas to the division’s facilities planning team.

According to Ricks, she and her fellow classmates are not only excited about their designs, they are also excited to be part of a project that will impact future generations.

“When you grow up and you see all of the other kids playing on the playground, you’ll remember you took part in something exciting.”

Since the three-year modernization will be completed in phases, a portion of the classes are scheduled to move into classroom portables, known as “cottages,” next school year. When finished, the now 61-year-old school will feature brand-new classrooms with extended learning pods, a new cafeteria, new gym, new library, new offices, a central courtyard, additional parking, site circulation improvements, a new turn lane for added safety off North Great Neck Road and, of course, a new playground!