“Everyone get goggles. We have a lot to do in a little bit of time,” announced Kathy Brasington.

The Kellam High School chemistry teacher had a shortened class period due to citywide Standards of Learning (SOL) testing and her students had a lab to complete.

Kyle Bradley retrieved goggles for himself and lab partner Cam Barackman. He knew his other lab partner, Hunter Batkins, wouldn’t need them.

Batkins, a sophomore, was participating in class from home via a robotic telepresence device. The iPad through which he was communicating did not need eye protection.

The robot, known as “Double” to some, has been used at two high schools this spring by students eligible for homebound services. It allows students to have a physical presence in school and attend classes until they are able to return in person.

“When our students are homebound, they are tutored in four basic classes – math, science, social studies and language arts or English. Double gives them availability to participate in all their subjects and in areas where we are unavailable to secure tutors, like upper-level classes,” explained Denise White, coordinator of student conduct/services.

In his chemistry class, Batkins was seen and heard through the iPad display and speaker which is atop an adjustable pole attached to a single-wheel, self-balancing transporter. The robot connects to school Wi-Fi via the iPad once a student has logged on to the Double Robotics website from a computer or tablet equipped with a webcam and microphone. Students drive or move the robot from home using the arrow keys on the keyboard.

“I play video games, so it’s easy for me,” responded Batkins when asked about driving Double in school. Turning can be a challenge, he admitted.

Students can raise and lower the iPad for interactions at sitting and standing levels. Batkins kept the iPad lowered to “sit” at his lab table and talk with friends before class and listen to teacher instructions. 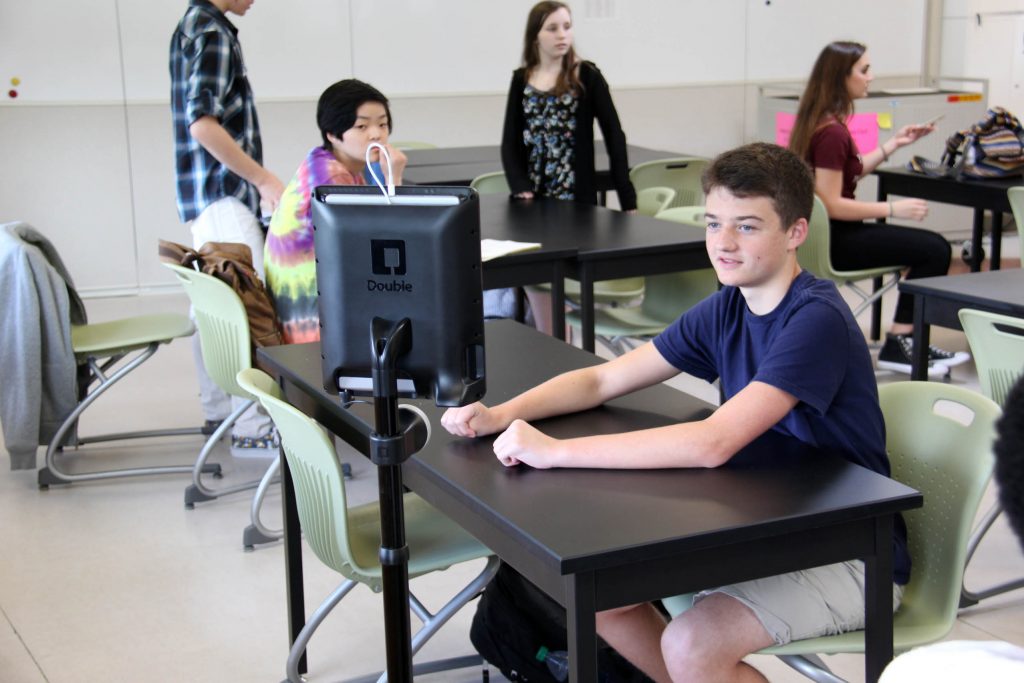 When the lab began, Batkins rolled to his group’s lab station and raised the iPad using controls at home to watch the work of partners Bradley and Barackman. He recorded data on lab paperwork he received in advance from Brasington.

“Can you see, Hunter?” asked Barackman before they started.

“Hunter, did you get that?” asked Bradley about the first figures from the lab. He restated them for his robotic partner. 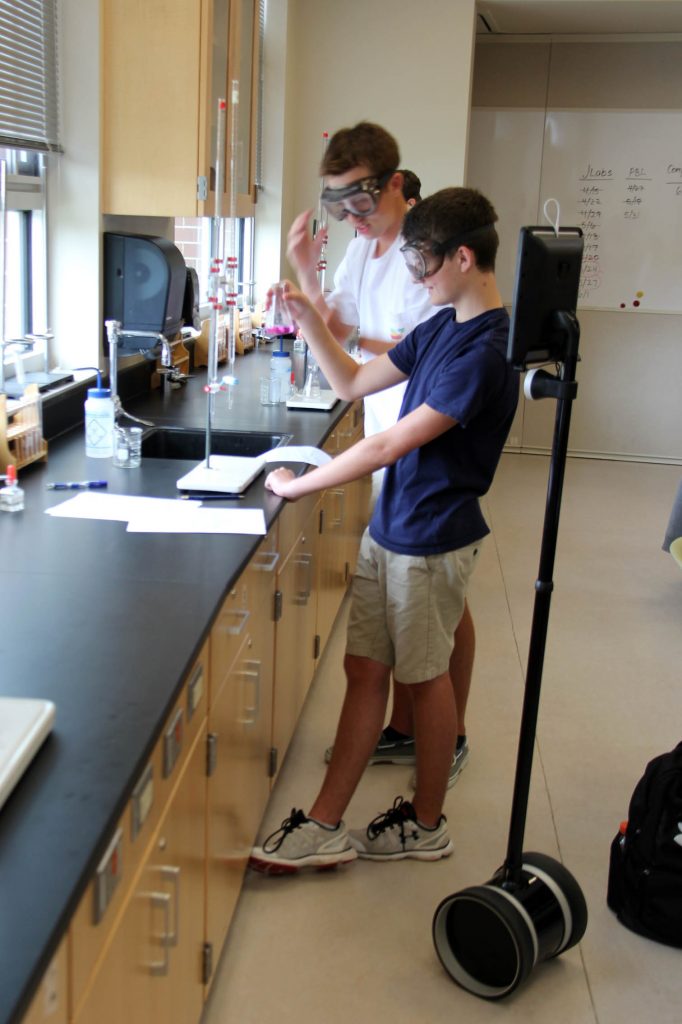 “It’s been really good,” said Brasington of the experience. “He talks to the guys at his table. He communicates and will ask questions. He’s included just like he’s here. I think it’s a wonderful resource that the school division has for motivated students.”

What is not always wonderful are the technical glitches that inevitably occur when using technology.

“Mrs. Brasington, he can’t hear us and we can’t hear him. He can’t talk to us,” Bradley called out as students nearby turned to help. 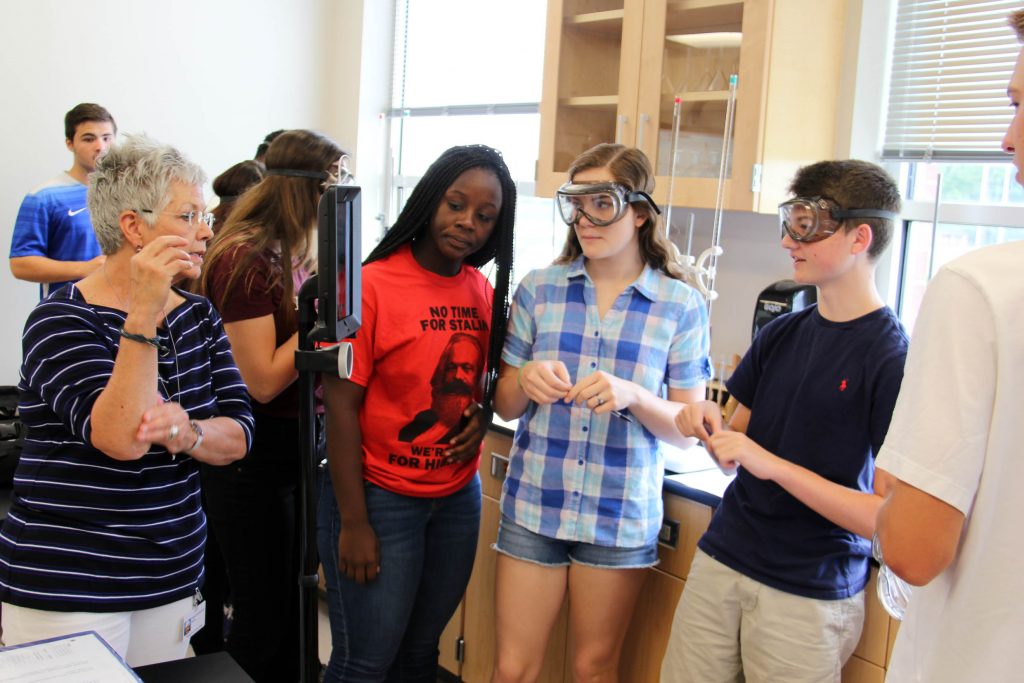 The trouble with Double was short-lived. Batkins reconnected and was seen on the screen again.

Connection issues were cited by Ocean Lakes High School (OLHS) freshman Ryan Boylan as the most challenging aspect of using the robot dubbed “BoylanBot” during his use in April. He noted sections of the school’s hallways have spotty network problems, which means the robot loses its Wi-Fi connection and stops moving.

White explained that it is one of the reasons a “minder,” a fellow student or staff member, is always with the robot when traveling to and from classes. According to White, the travel time in between classes is also an opportunity for homebound students to socialize with peers.

That was an aspect Boylan seem to value most.

“I was glad I was able to talk to my peers because being out for that long and not interacting with any of your peers can be hard. I almost felt like I was there talking to my friends. That was a good part of it, and I kept up with the work pretty well,” Boylan said.

He also was able to keep up with practice in band class, an elective course he would miss without the robot.

“I listened to them play. I was even able to practice along with them at home sometimes. It was cool. I gave them a couple of piano solos,” said Boylan. 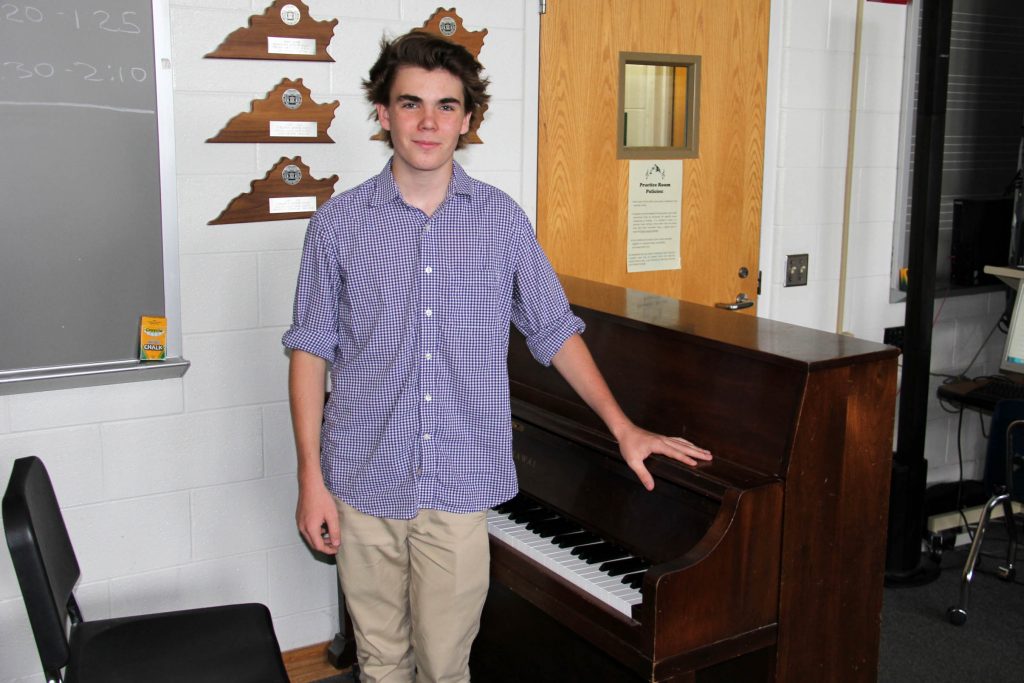 Boylan’s teachers observed the benefits of using BoylanBot as well.

“You can’t really replace instructional time in the classroom so it was great that Ryan could be there when we were learning new content,” said OLHS math teacher Susan John. “He asked questions like he always does and the novelty wore off with his peers super fast. It was no big deal for them to interact with Ryan.”

The novelty wore off quickly in English class as well. Teacher Ashley Adams said students were enamored with BoylanBot’s presence the first day and then adjusted quickly. Boylan participated in classroom discussions as well as small group work.

“We finished reading The Last Lecture and students began to create their own four- to five-minute speech that would impart some advice on other students,” said Adams. “When we had a timed partner practice, Ryan and his partner were able to give feedback to one another on timing, inflection, eye contact and content. It was invaluable for Ryan to be a part of this class because he would have missed the feedback otherwise.”

“We waited until Ryan could present in person, but we could have done this via the robot as well,” Adams added.

Being at school in person was questioned by some of Batkins peers after having seen Double in class and in the halls.

He understands the allure.

“Right when you log off, you’re already home,” he said.

And it’s from home, noted White, homebound students can feel right at home in school.

“If there in a club and they want to participate in their club, they can go,” she said. “They can attend after school tutoring sessions if they like. They can go to lunch if they want to. It’s all part of the socialization piece we’ve seen become very important. They are not isolated in homebound.”

White added there is flexibility for homebound students who use Double to access tutors as needed or when they can’t get to school for a particular reason, such as for Standards of Learning testing. A tutor administered SOL tests to Boylan at home.

But for students who do use the robotic telepresence device, its two test drivers to date indicate they won’t be disappointed.

“Everybody just loves seeing it,” said Batkins, “and they think it’s really cool.”