Diamond Springs Elementary pre-kindergartener Ratyle Abdalla was all smiles on her fifth birthday. Abdalla and her classmates, however, were focused on another equally important “five” – balloon No. 5 on their class countdown to summer and kindergarten. 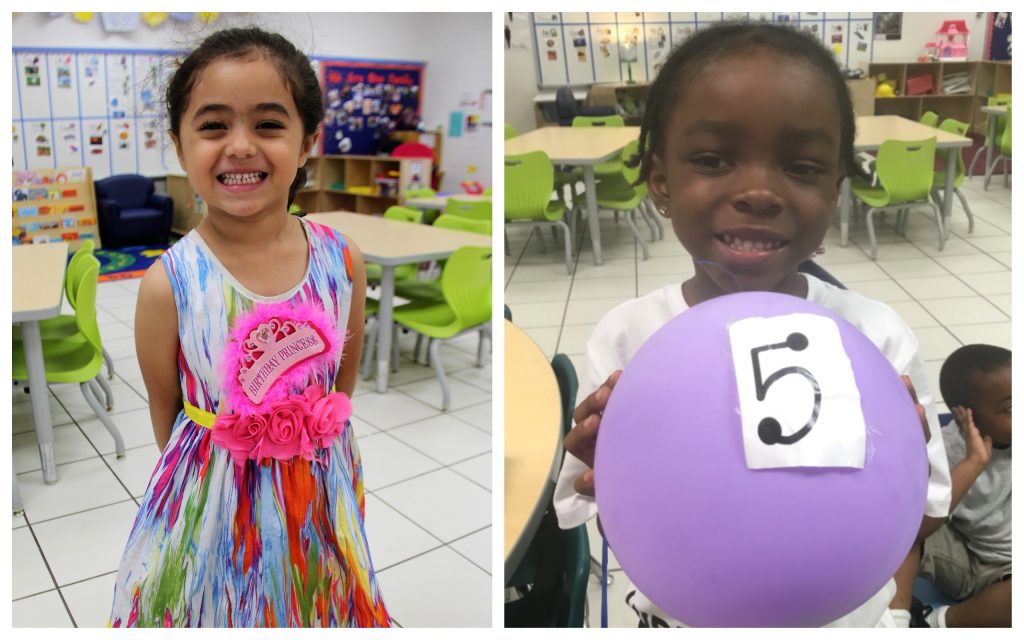 Altimar Williams was the lucky student to have his name drawn by his teacher, Mary Dodson, from the five remaining names. He had the honor of revealing the day’s surprise activity for Monday, June 11.

“Altimar, do you want to pop it or do you want me to cut it with scissors?” Dodson asked. 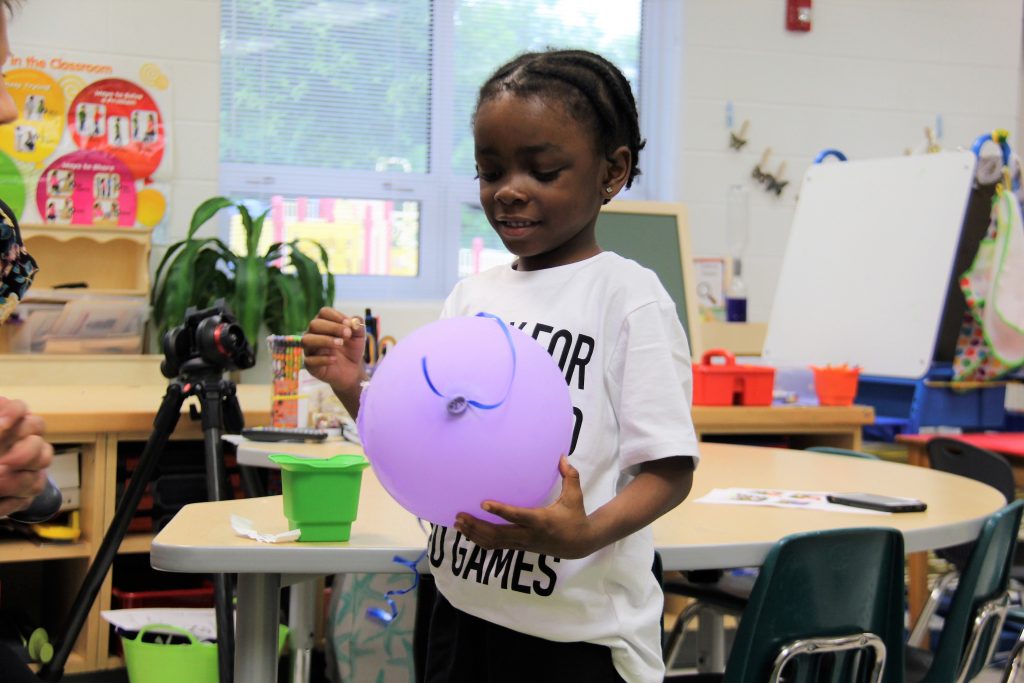 “Cover your ears because it’s loud,” cautioned one student. “No! It’s not loud,” countered another.

His first attempt, met with gasps of anticipation and hands clutched over ears, was unsuccessful.

The second attempt resulted in a loud POP!

The pre-kindergarteners squealed with delight on the carpet. The morning ritual was just as exciting on the 14th day of the countdown as it was on the first.

“Are you ready to reveal it?” Dodson asked Williams after he located the small scroll of paper that was inside the balloon.

“You know these two beginning letters…P and P,” prompted Dodson as Williams looked at the paper with her. “It’s parachute play!”

More squeals of joy from the pre-kindergarteners upon hearing the day’s special activity. 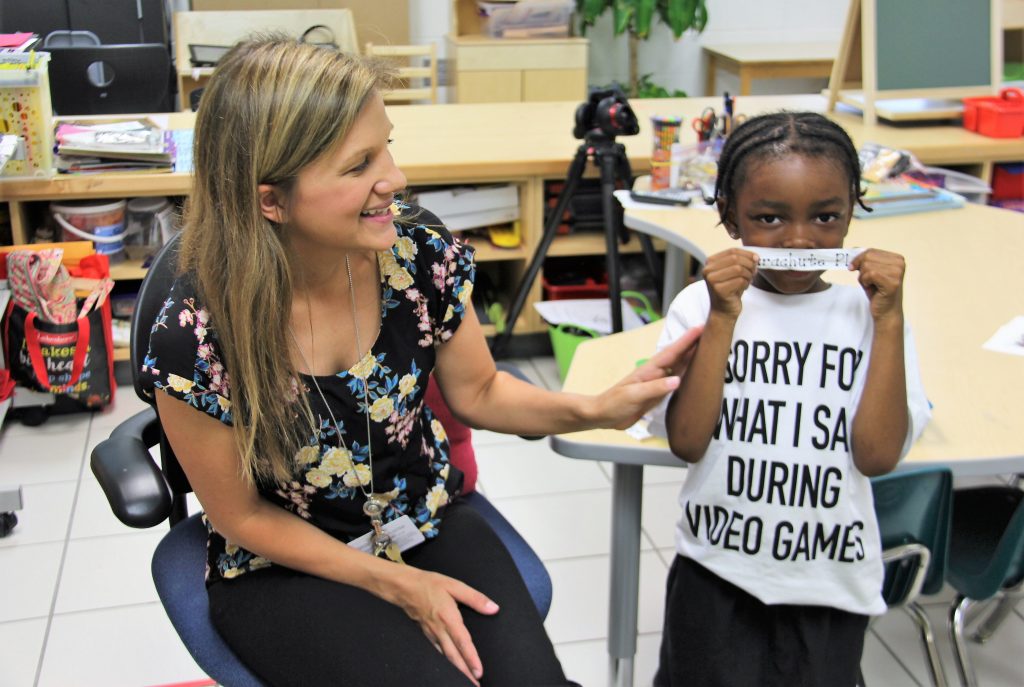 Dodson created the 18-day countdown – one balloon for each of her 18 students – as a fun way to wind down the school year. A different student’s name is drawn each morning to pop a numbered balloon with a new activity for the afternoon. 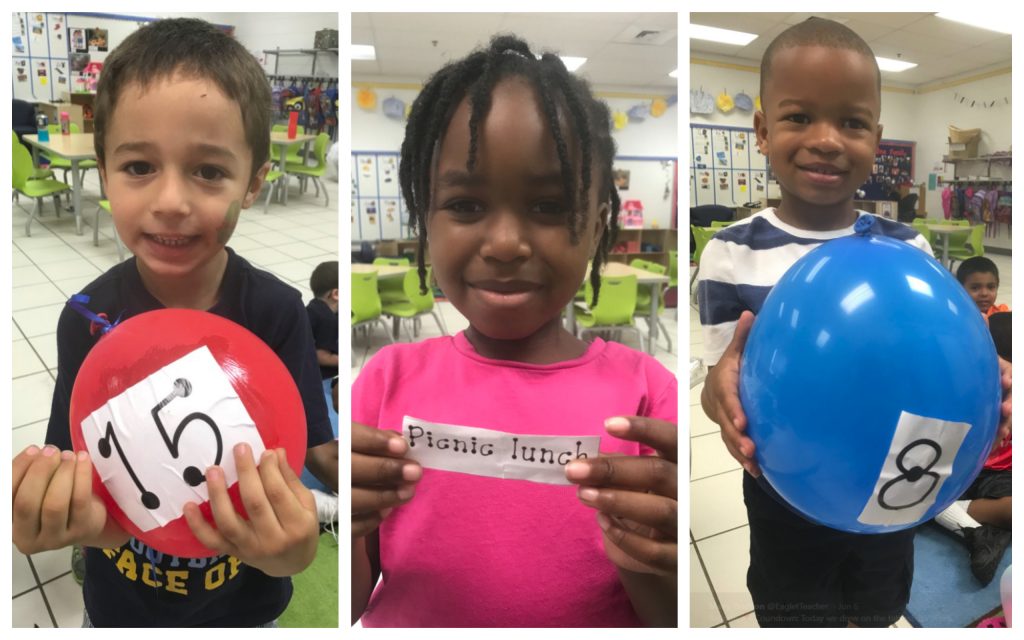 “I think it’s a nice little ritual for us,” said Dodson. “I just felt like we needed some closure for the end of the school year, but one that wouldn’t create anxiety for our students – one that’s more exciting: You’re going to have summer and become a kindergarten student and a leader.”

“I’ve also tried to pick activities that we have done through the school year so they can reflect back on when they did it earlier,” continued Dodson, noting she also mixed in some treats and unique activities.

The countdown kicked off with a dance party on Day No. 18, and was followed by: shoes off in the classroom, read outside, popsicles, sidewalk chalk and picnic lunch. 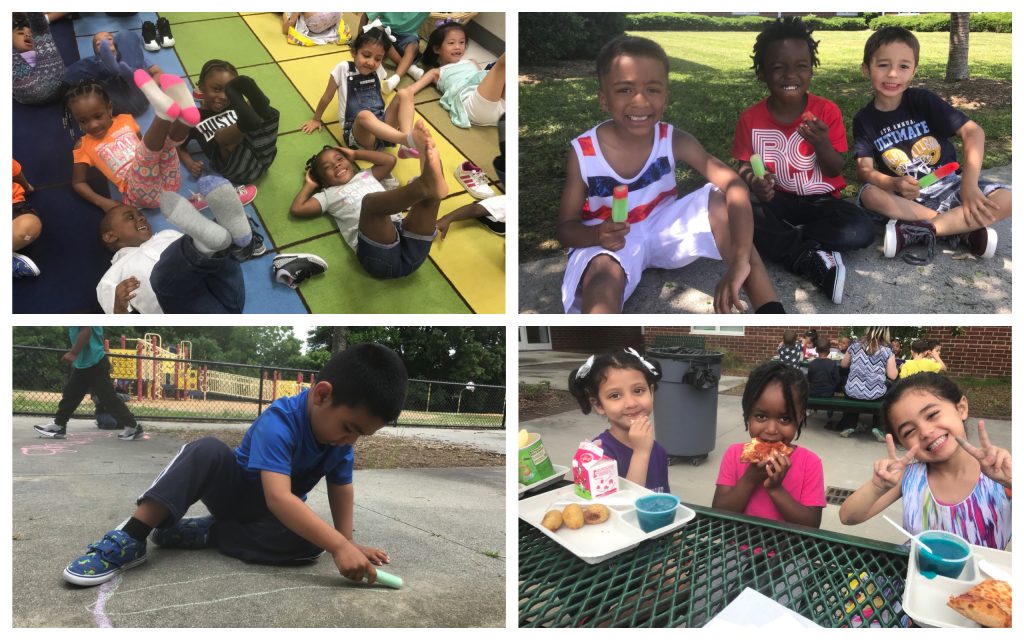 Day No. 12 was a snowball fight. With real snowballs?

“Nooooo,” was the group reply from the class.

“They were fake snowballs,” explained Ka’ron Murphy. “Then we got on teams and we throwed the balls.” 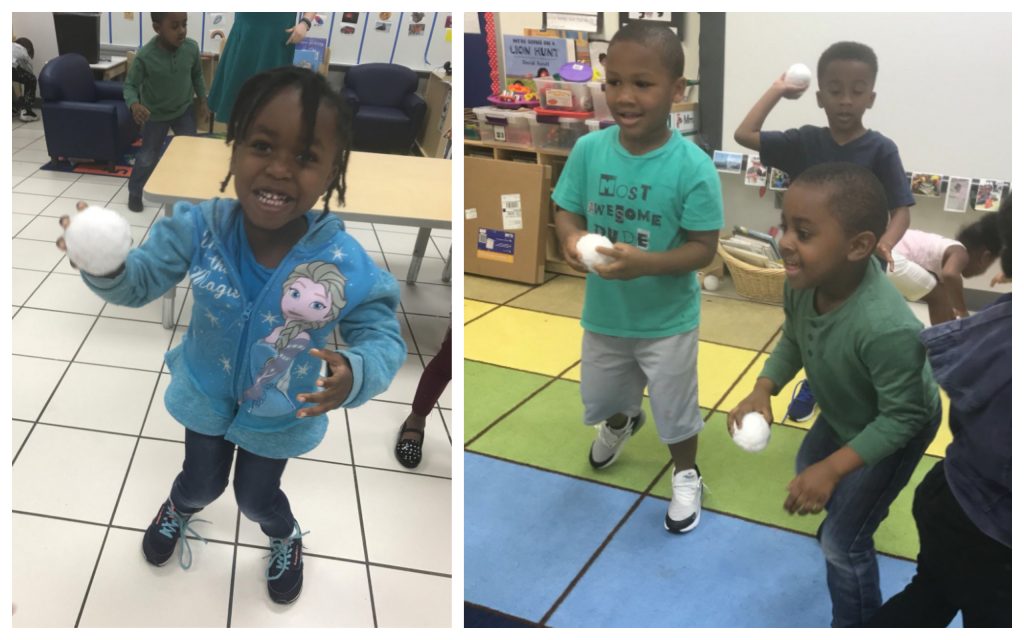 They threw water balloons on Day 11 and had fun in the days that followed by blowing bubbles, having extra recess time, drawing murals on tables and chewing gum. 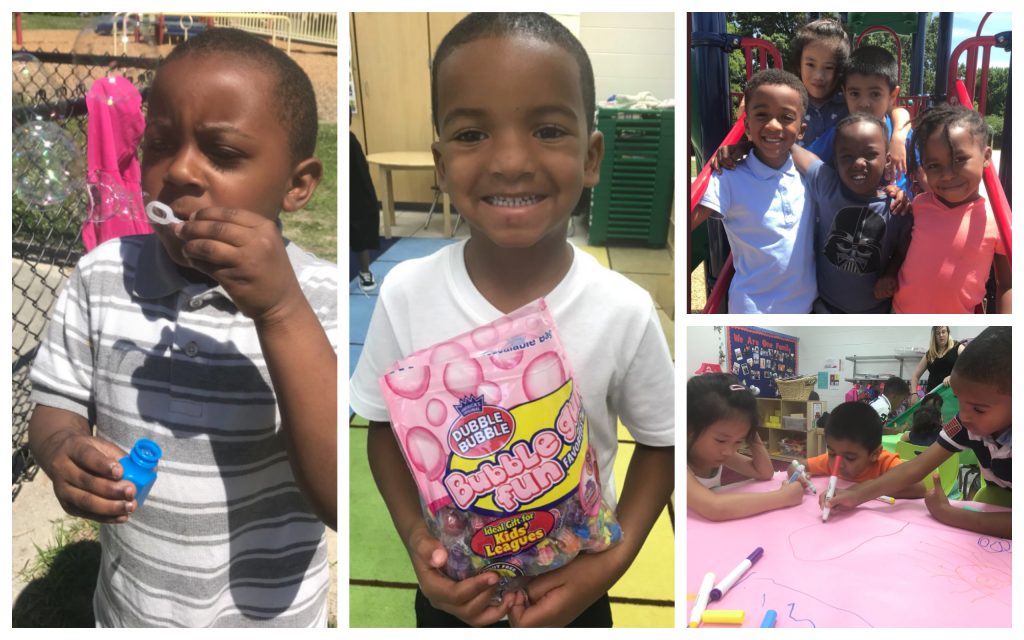 Day No. 7 might have been the most popular day so far – shaving cream on the table. It was a repeat activity from earlier in the year.

“They did the shaving cream in a station and it was really for fine motor skills and for practicing sensory and practicing writing their name or their numbers,” explained Dodson. “This time I said: You can do whatever you want – make a big mess on the table. They really had a blast doing that.” 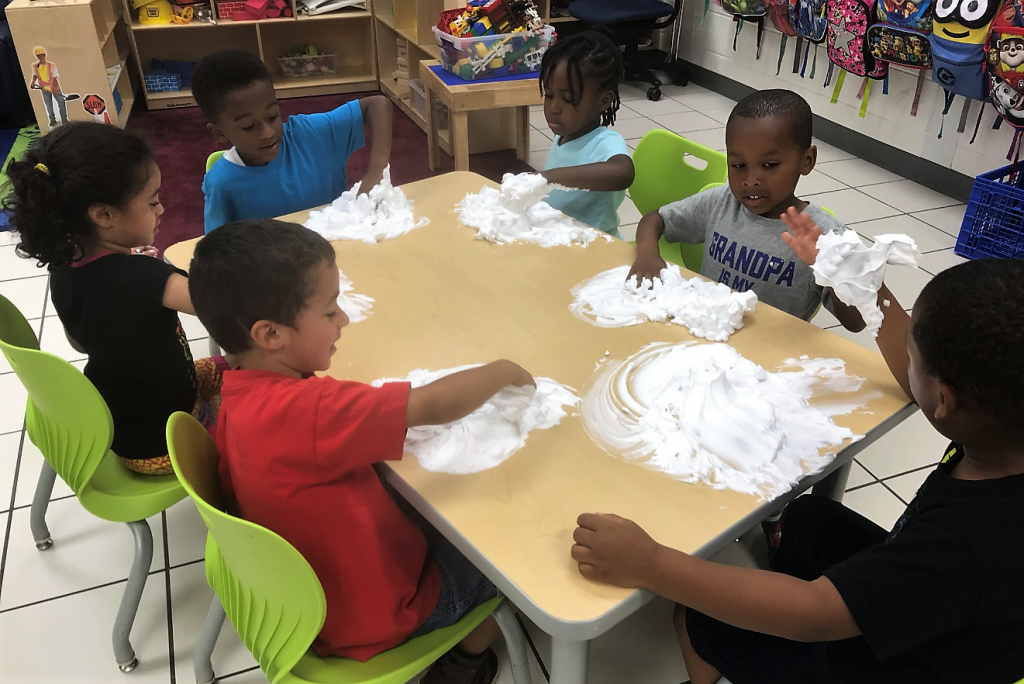 Parachute play on Day No. 5 brought an equal amount of smiles and laughter. 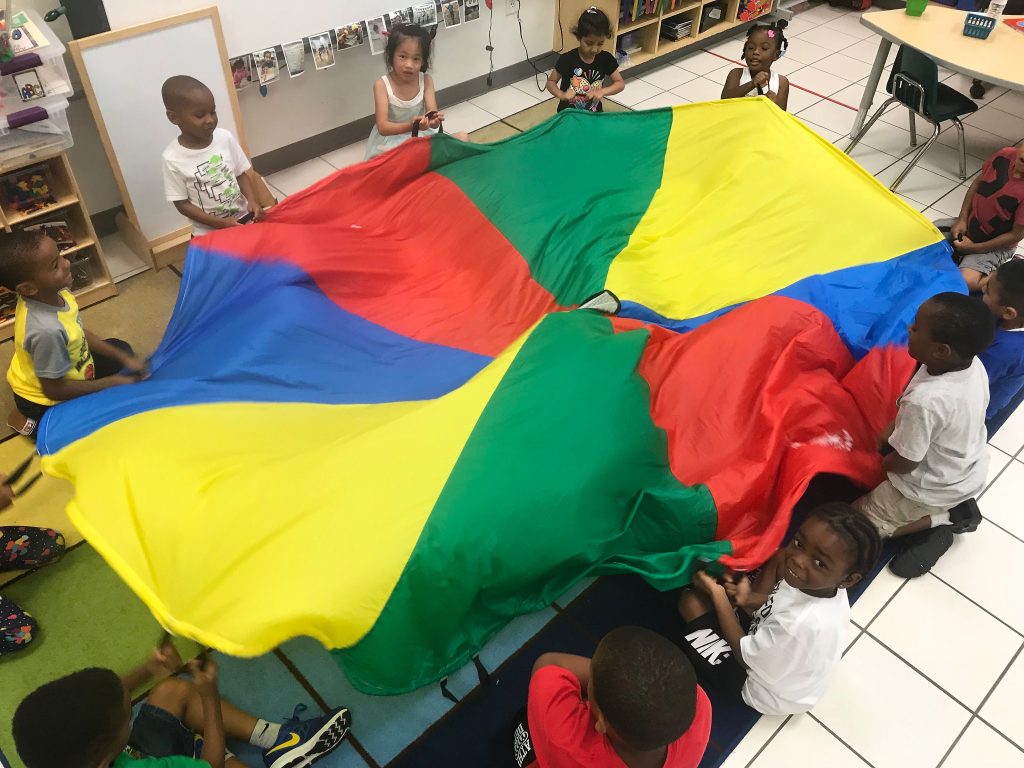 What do students think will be the activities in the remaining four balloons?

“Popcorn and movies,” said Damiya Underdue to cheers of agreement from his classmates.

“Maybe we could go on a train,” Williams suggested.

“Jaiden, do you have an idea? What do you think?” Dodson asked.

Dodson laughed and explained to a visitor, “This class likes pickles for some reason.”

Outside of the classroom, Dodson confided that her students correctly predicted two activities for the remaining days.

She also shared that she hopes the 18-day countdown reinforces another important lesson.

“Something they also have to learn is to be patient and wait because they are not going to get a turn every day – especially my friends who have been waiting so patiently for the last few days. It’s important for them to realize that their turn is maybe not today but maybe it will be tomorrow or maybe the next day, and being excited for the friends who do get a turn and do get the chance to pop the balloons.”

When Dodson’s students return from the summer break, they will be Diamond Springs Elementary kindergarteners. They are already thinking about what they will learn and do in the next grade level.

“How to be listeners.”

“Play on the big kid playground.”

In the meantime, there are four more balloons to pop and Dodson is happy to see her students end the year with smiles and hopefully with many fond memories of pre-kindergarten. 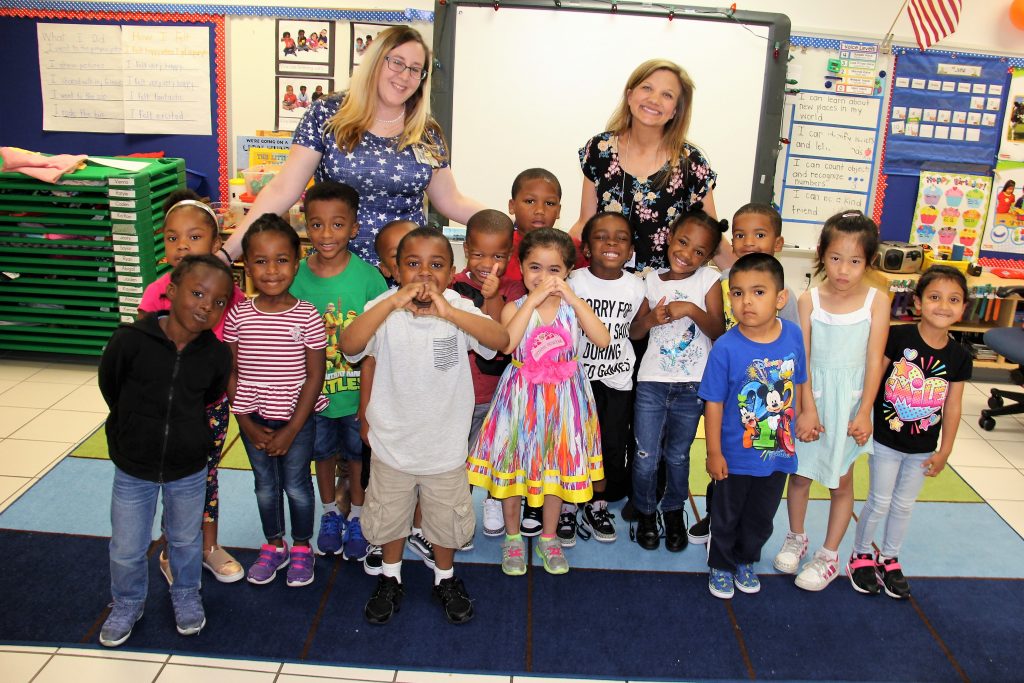 “They’ve been such a wonderful class, and I think they’ve just really had a good time with it,” she said. “They’re looking forward to [the countdown] every morning. It just has been fun for them.”