Before last summer, third grader Sarah Reeves didn’t look forward to sports. It wasn’t because she didn’t like sports, but rather because she thought other students would focus on her cerebral palsy (CP).

But that changed one afternoon last summer.

“She was playing soccer and after the game the referee, John Ballou, who is also an athletic coach at Larkspur Middle School, called me over,” Sarah’s mom, Toney Reeves shared. “He said that his son, Adam, has cerebral palsy and now plays for the United States Paralympic National Soccer Team. Mr. Ballou was trying to start a Paralympian women’s soccer team.”

Amid that conversation, the phone rang. On the other line was Adam Ballou.

“Sarah and Adam talked for 25 minutes and he told her not to get discouraged,” Reeves recalled. “We were all a little emotional because the week before Sarah was saying how much she hated her CP. It’s almost like we were meant to be there that day.”

On the phone, Ballou, who grew up in Virginia Beach, shared his story with Sarah.

Ballou was diagnosed with cerebral palsy when he was six months old.

“My parents kept encouraging me, so I ended up being just like one of the other kids—being integrated as much as possible.”

By age three, he started playing soccer, even as he continued physical therapy.

By age 14, he had been invited to train with the national team, which then led him to competing on the international stage before representing the United States at the 2012 summer Paralympics in London and at the 2016 Paralympic games in Rio de Janeiro. He currently lives in Spain where he plays for a professional soccer club.

“That one phone call changed her life,” explained Reeves, adding that Ballou has continued to inspire Sarah, who keeps a journal to ask him questions when they talk. Sarah even tried out for and made the basketball team, something that her mom said she has wanted for years and attempted for the first time after being inspired by Ballou’s perseverance.

On Jan. 3, Ballou and Sarah met for the first time. Ballou held a small assembly at Sarah’s school, Hermitage Elementary, to inspire students to pursue their dreams, regardless of challenges.

“Everyone has their own difficulties,” he shared. “Everyone has their own things that come up. They may be in family life. They may be in school life. They might be in a variety of different things, but if you have a goal, keep that in your mind and think about it every day and don’t give up because you never know what’s possible. Half the battle is believing in yourself. Enjoy the ride. It might not always be easy, but it will be worth it.”

After the assembly, Sarah, who wore a Team USA T-shirt, spent a few minutes chatting with Ballou and held his bronze medal that he won at the Parapan American Games in Lima, Peru.

When Sarah was asked what she thought of Ballou, she said, “He’s my hero.” 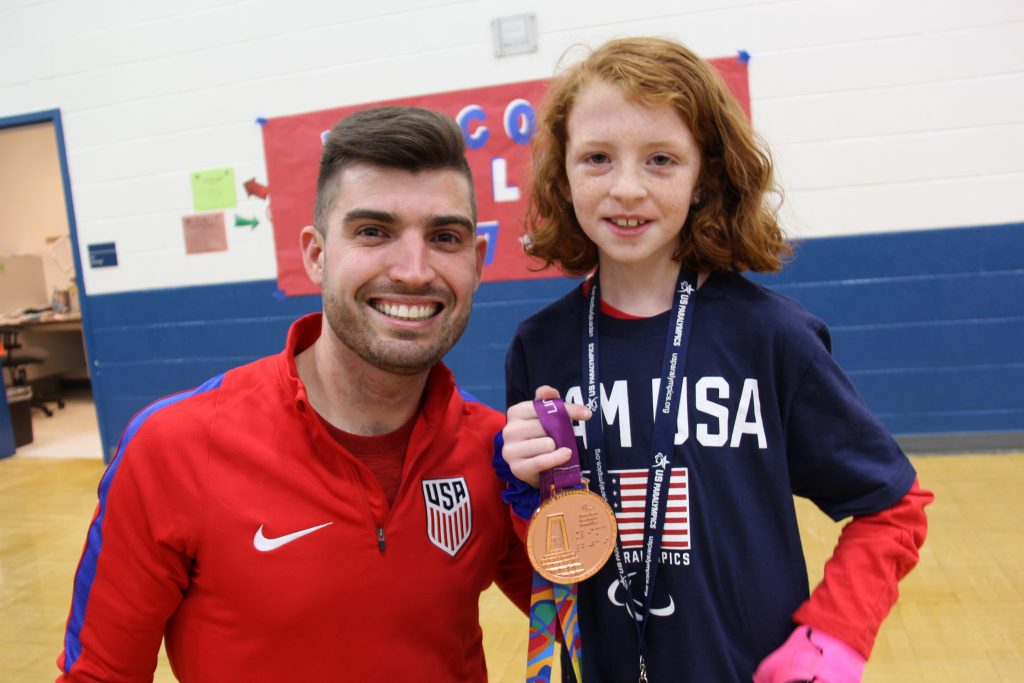 One thought on “Paralympic athlete inspires students to pursue their dreams”