Dubbed the “Solar Express,” a grey and black Power Wheels F-150 equipped with mounted solar panels, earned Landstown High School the Virginia Senior School of the Year honor for the third consecutive year. Additionally, this year’s project – which was created by a five-member team of students enrolled in the school’s Governor’s Science, Technology, Engineering and Math (STEM) and Technology academies – went on to receive distinction as the nation’s Outstanding Energy Engineering Design Award.

These honors are presented by the National Energy Education Development (NEED) Project as part of its annual Youth Awards Program for Energy Achievement. Schools from across the country are invited to compete by submitting entries that show innovative use of energy efficiency or new energy technologies. State winners are selected for each school level and then move on to compete in various award categories at the national level.

“We took a Power Wheels F-150 and took out all the human control and replaced it with electronics so that we can control it from the VEX EDR [robotics] controller, and then made a solar tracker that tracks the sun across the sky to get even sunlight all day and charge the battery pack in the back that we can use as a portable charger for laptops or phones or other devices at football games, at school or on-the-go,” said junior Adam Gehl, one of the five team members. Team members also included juniors Austin Muniz and Nash Euman as well as seniors Alix Allen and Nathan White. 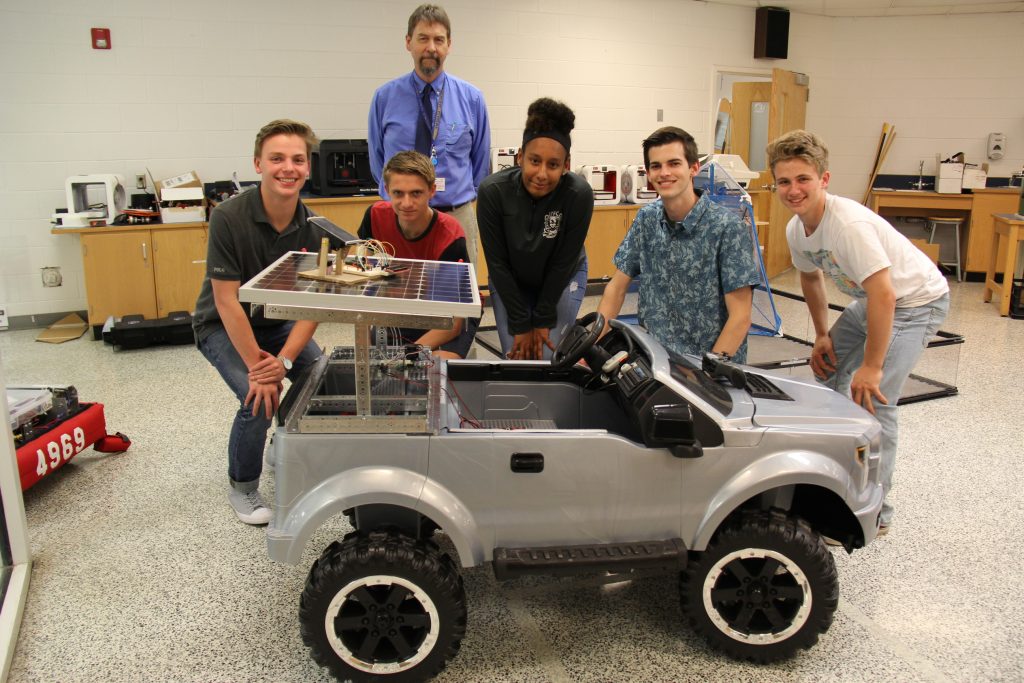 Building a solar-powered charging station on a Power Wheels was not as easy as adding any store-purchased solar panel to the rear of the truck.

“There were a lot of trials,” Gehl said, adding that he quickly learned the importance of prototyping when he presented the smaller-scale model to Dr. James Barger, the school’s engineering department chair and robotics technology instructor.

“I didn’t realize it then, but he was getting us ready for the challenge of scaling it up,” Gehl added. “You don’t want to tear into an expensive Power Wheels and realize that your idea really isn’t going to work. We were taking different brands of electronics and styles of electronics and merging them together and that presented many challenges in the code. Learning how to reference new motor controllers that we hadn’t worked with in class and learning how to code them was all a huge learning curve. Eventually, we all got it here but it was a lot of work.” 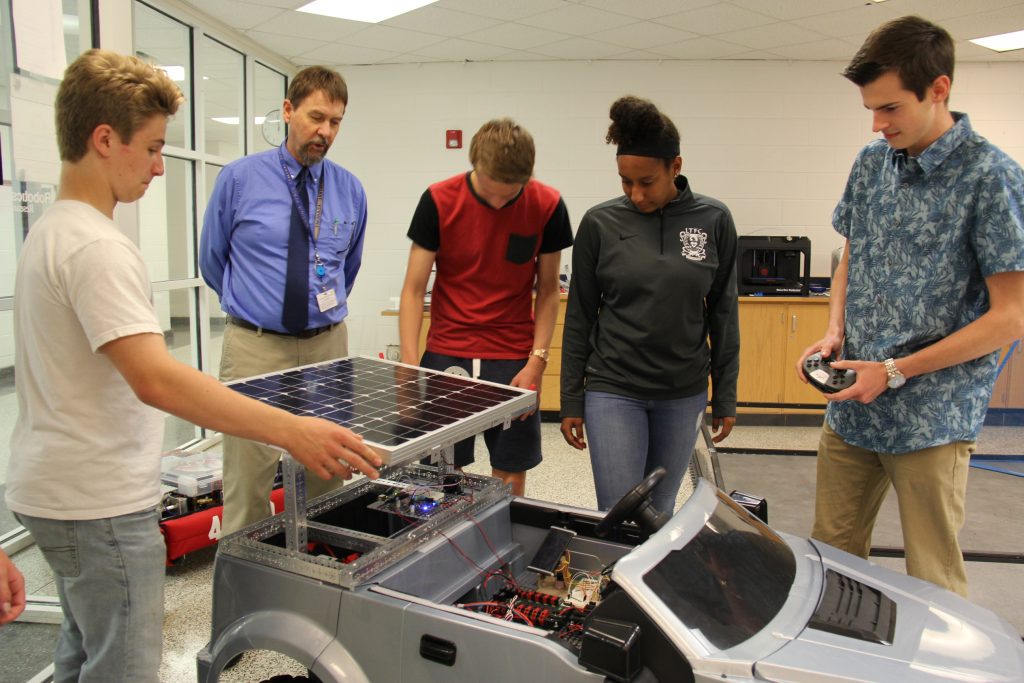 Muniz said that besides merging code and equipment, it also required merging their various skill sets.

“We each study a different branch of STEM,” Muniz stated.

Muniz and Euman focused on Computer Assisted Design, while Gehl worked on the electronics. White and Allen worked on the robotics and automation as well as the presentation, one of the requirements of the project.

For the presentation, they took their car on the road to Parkway Elementary for that school’s STEM Career Day. 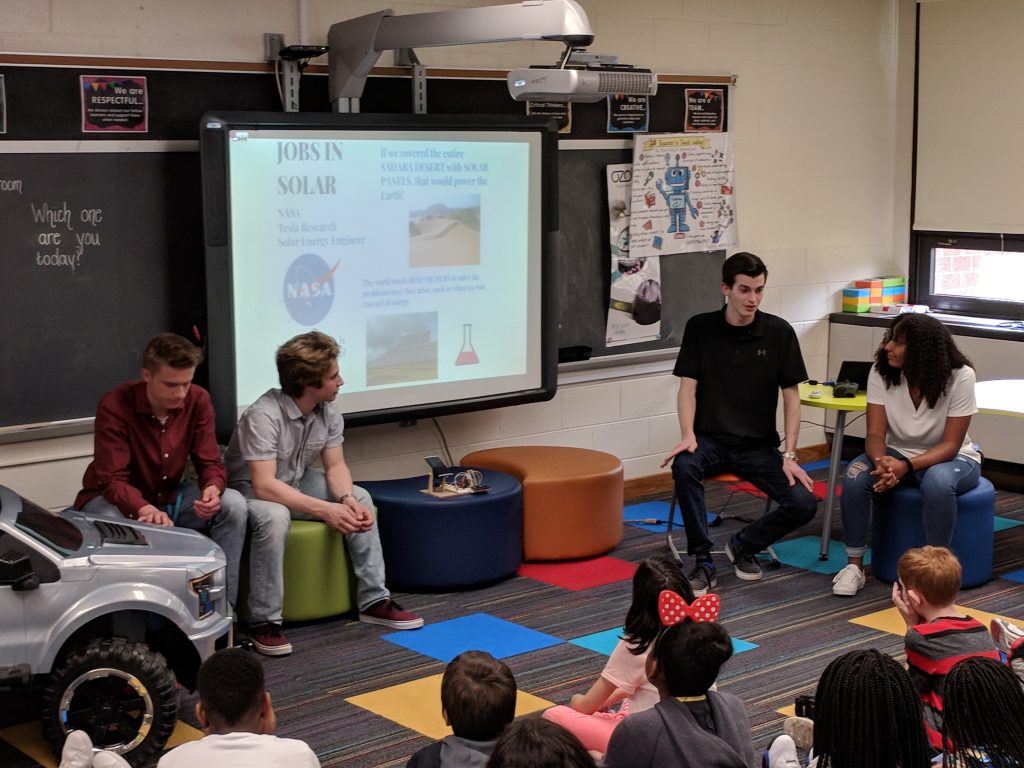 “They were really excited about it,” said Euman, “That’s what we were hoping to get because if we can inspire younger generations now, then maybe in the future they would be more apt to do sustainable practices and get into solar to help the world be a better place.”

“This project really helped me realize how great renewable energy is,” she said. “To get this far and do it seems so attainable. We’re making everybody’s carbon footprint a lot smaller and it’s doing things like this that will make the world a better place.”

“Some people assume that it’s going to be this way for future generations, but it’s our job to educate them, if they’re interested, on how they can truly impact the world.”

Barger credits the five-member team for their diligence on this project since it was not a class project nor an after school club.

“One of the things that is important is that this is not a class that you sign up for. This is an afterschool activity that since the beginning of October, they have been coming in at minimum once a week – sometimes more – to work on during their lunchtime or after school,” he said. “They do this extra, over and above all of the classes that they have going on.”

In the end, he says the hard work will pay off as it has with former students who have worked on other NEED projects and returned to say how much going through the process has helped them.

“This project reflects the workplace and the engineering process,” he said. “I can put the NASA engineering process up on the wall and it looks really pretty and we can say we follow it, but until they do a project like this where they have to work through a brainstorming session, build the project, re-engineer it and once you have a prototype and its working, then you have to go back and evaluate it.

“Until they start working through that, they probably don’t realize all of the steps that you’ve gone through. Inevitably, students come back, email me or text me and they say ‘doc, now I understand why you had me do this because I’m doing this in my class and I understand it.’”

The team will be honored at the National Youth Energy Conference in Washington D.C. June 22-25, where they will also share their “Solar Express” car with other students and teachers from across the country as well as industry leaders in renewable energy.

“We have a couple of ideas. We’re thinking of a full trailer for charging that will attach to a solar panel that can be towed,” Gehl stated.

But according to Euman, one thing that they definitely know is that they “will probably be back in September, brainstorming to try to win again.”