The Three Little Pigs have started a band. Little Red Riding Hood has turned to a life of crime. And Fairy Godmother has lost her magic. 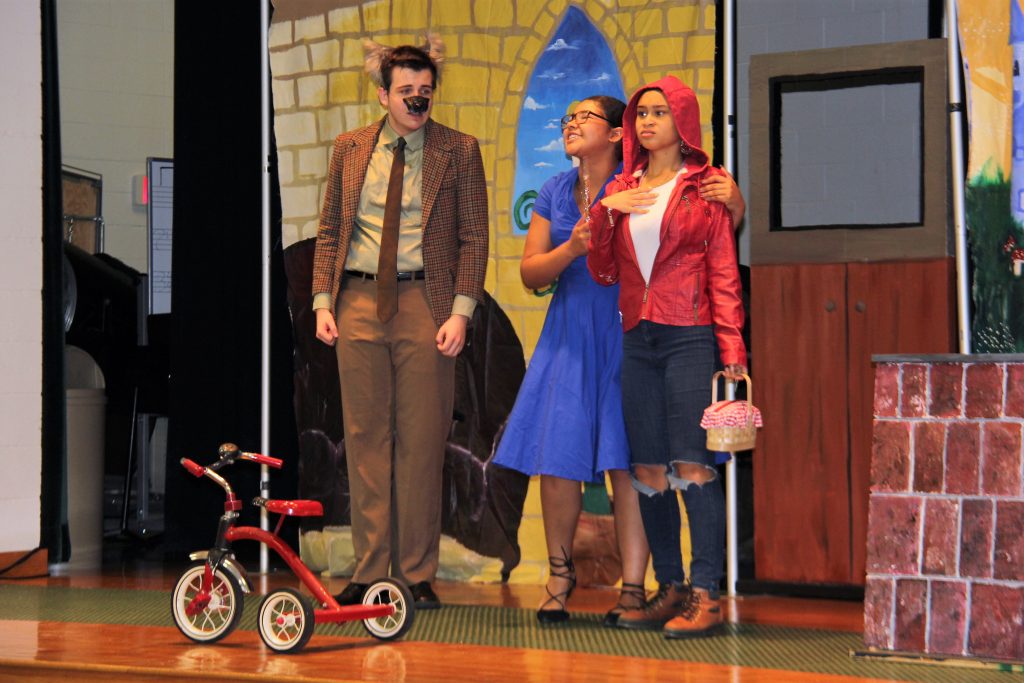 That is only part of the drama for a cast of characters in “Once Upon a Time: Reporting Live,” one of two original plays performed at elementary schools throughout the spring by seniors in the Visual and Performing Arts Academy (VPAA) at Salem High School.

The second production, “Don’t Judge a Monster by its Tentacles,” has its own share of drama when the main character has a nightmare before her first day at a new school, filling her dreams and the stage with monsters. 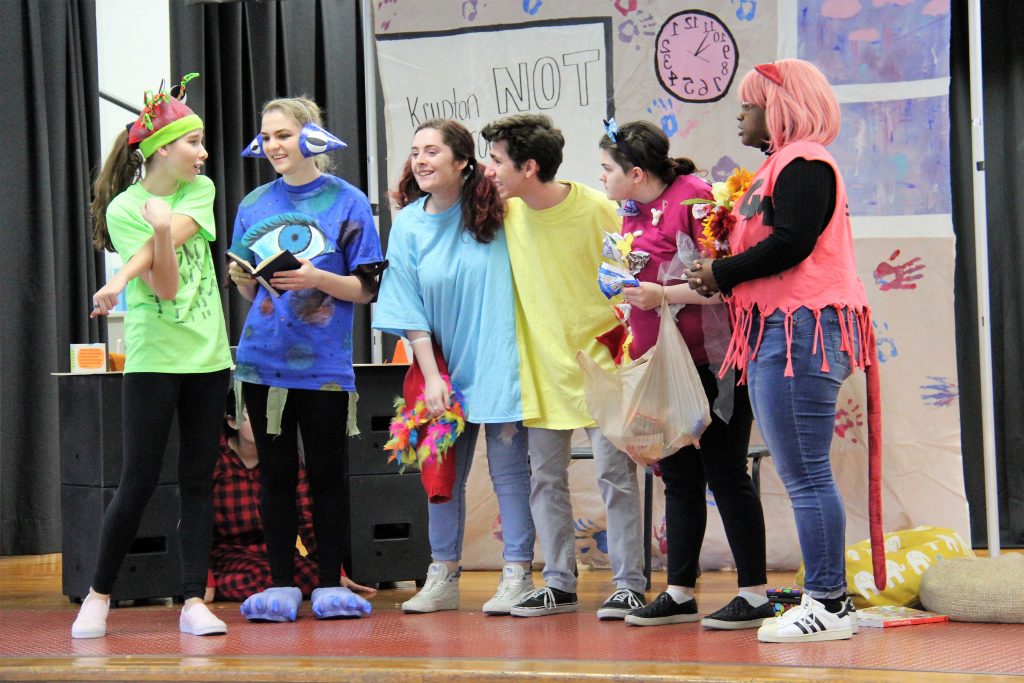 The high school performers travel with their own sets, props and costumes, setting up the stage in 10-15 minutes and making quick costume changes before the school cafeteria fills with students. 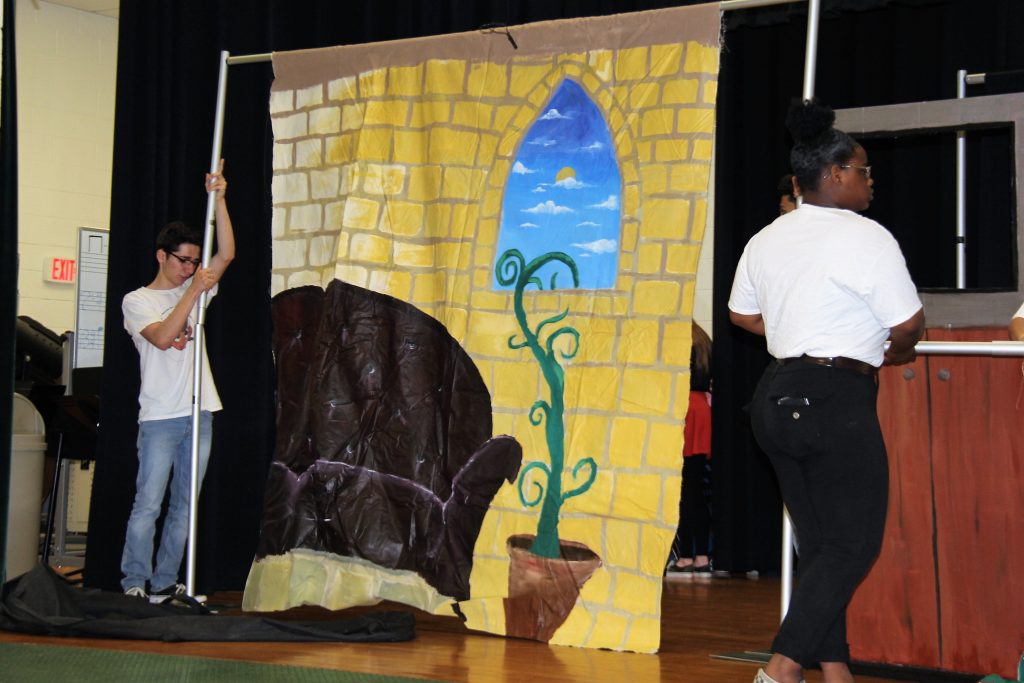 “It is the release of or transfer of responsibility,” explained Byrd. “They spent four years learning all of these elements. This is that final moment when they get to process everything they’ve learned into a performance – a performance assessment, if you will. You have to write it; you have to direct it; you have to develop it; and then tour with it. It makes it theirs. They own their art.”

Also owning the art are third-graders at Old Donation School (ODS) who collaborated with the VPAA seniors in the ACTC to create and develop the two plays.

In a series of workshops this winter, VPAA seniors met with students in two third-grade classes at ODS to create the works that focus on the hero’s journey, which is part of the third-grade curriculum.

“We went in with an idea,” said Jenna Hasher, who played a standoffish character named Triz in “Don’t Judge a Monster by its Tentacles.” “Like, we knew we wanted to do monsters and they knew they wanted to do fairy tales. Then we went to the classroom and we started asking them: What do you want to learn; what do you think is important to learn? We went back [to Salem], came up with a script and went back to ODS to start creating more of the characters. They were a big part of it.”

When it was decided that the Three Little Pigs in “Once Upon a Time: Reporting Live” would give up their house construction business and start touring with a band, the characters needed music to perform.

“We asked the kids to make up a song that the Three Little Pigs might do, and it’s supposed to be a horrible song on purpose,” said Bridges.

As scripted, the pigs sang horribly. And each audience laughed and laughed. 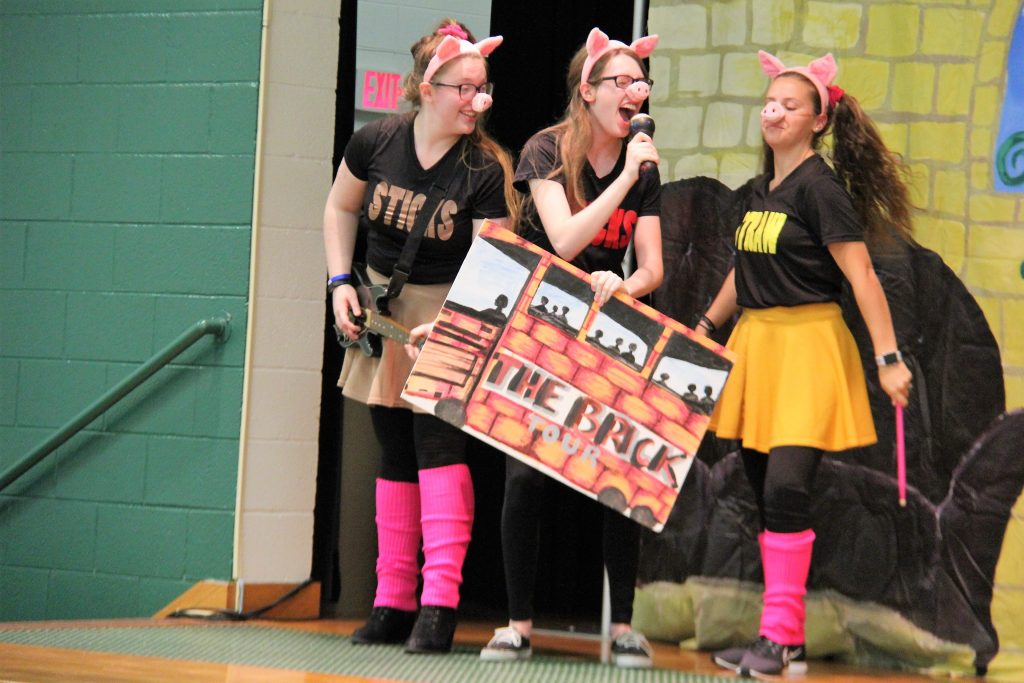 It was one of many funny moments that kept students entertained during each play, including a dancing teddy bear and Humpty Dumpty, who doesn’t want to have another great fall from a wall. 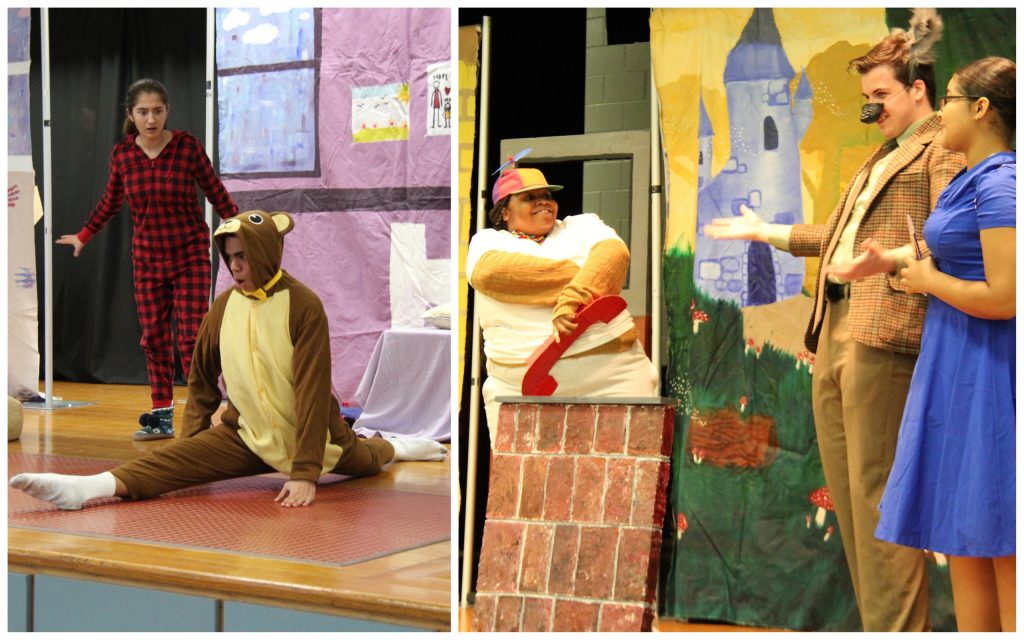 While the performers kept audiences laughing, they hoped the moral of each story would be the most memorable.

“Our biggest takeaway from ‘Don’t Judge a Monster by its Tentacles’ is to be true to yourself,” said Hasher. “When you’re trying to make friends at a new school or anywhere really, never try to be something you’re not.” 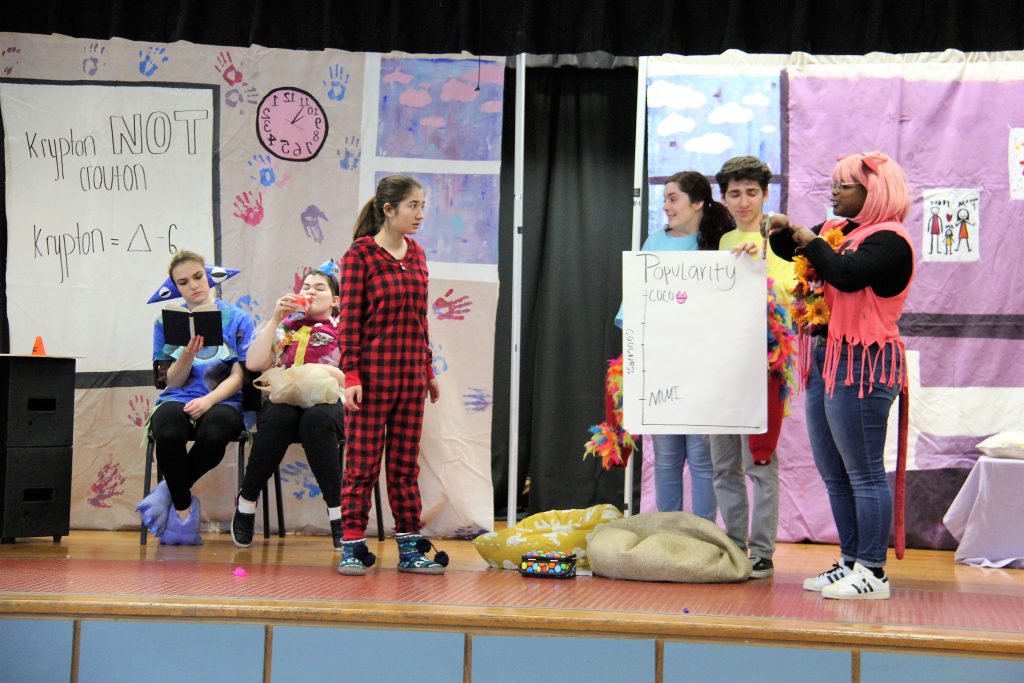 “And at the end,” continued Hasher, “[Mimi] realizes that while the monsters are outwardly scary, inwardly they’re not as bad as they seem at first.”

“Don’t judge,” Bridges added to the moral of Hasher’s play. “It’s basically, don’t judge anybody before you meet them. Get to know somebody and then make that decision.”

Of the play she performed in, Bridges said, “The moral of ‘Once Upon a Time’ is do what you love. Don’t do something just to get by or just because other people are doing it. Do what you want to do because you like to do it. That kind of applies to us as theatre students.”

The question-and-answer session after a performance of “Once Upon a Time: Reporting Live” was proof that audience members did receive the messages the high school performers hoped to deliver.

“Did anybody learn anything?” asked one student actor sitting on the edge of the stage. 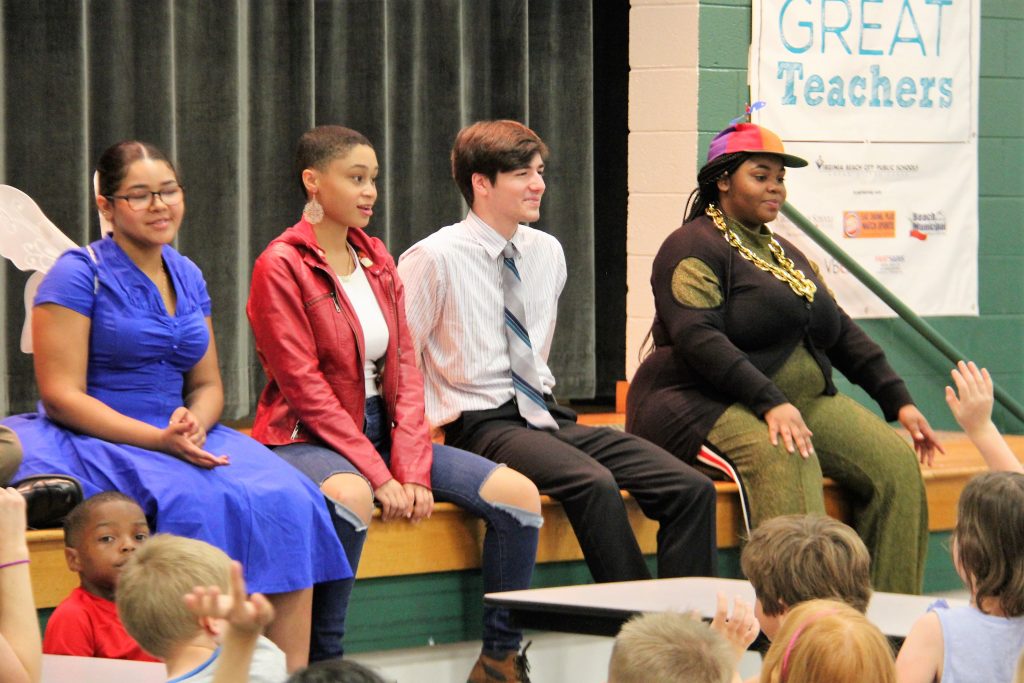 “To be kind,” “To be nice,” “Not to lie,” and “To be helpful,” were among the responses from the first-graders in the audience.

“A really huge component of theatre is entertainment but at the end of the day, it’s also about giving back the community,” said Byrd. “Theatre is built to be community-oriented – not just for entertainment and escapism but because the audience is forced to see themselves in the characters, situations and stories.

“Theatre enchants, inspires, teaches and activates the imagination leading to curiosity, creativity and a sense of connection. And there is no truer audience than children – more demanding, more challenging, and more rewarding.” 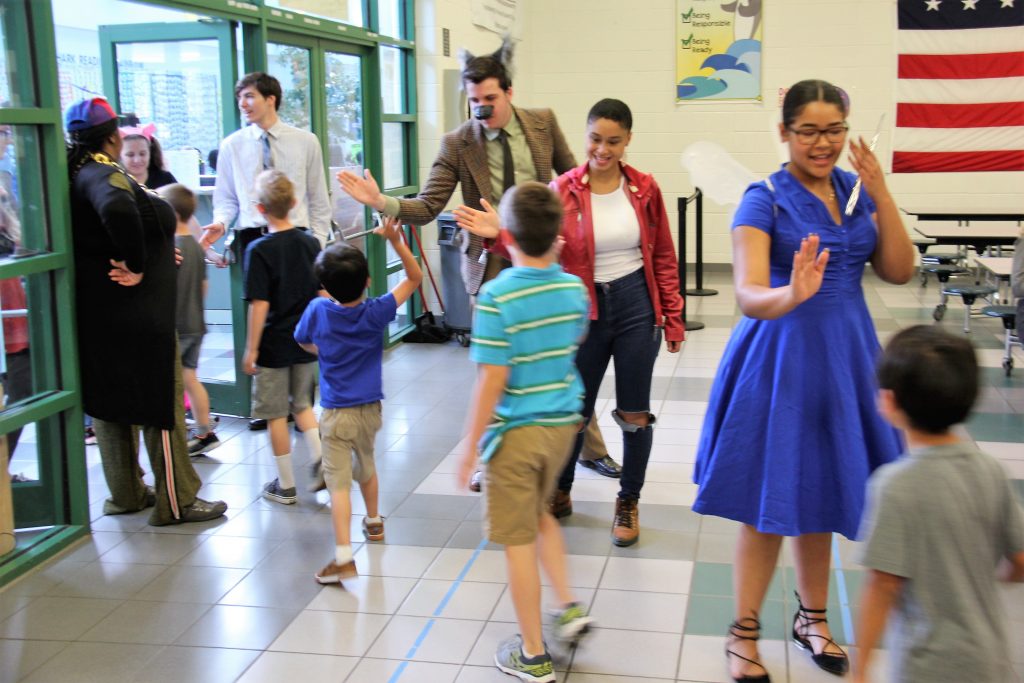 The children who helped create the original works will be special guests at the final performance of each play May 23 at ODS. The actors take the stage at 6 p.m., following a 5:30 p.m. reception featuring the VPAA steel drum band.

“We sent special invitations to the third-graders who helped us,” said Byrd. “We’ll sit them in a VIP section. At the end, my students will call up each group they collaborated with and give them certificates.”

The pride the third-graders will undoubtedly feel seeing their work performed on stage matches that of Byrd when talking about her graduating seniors.

“They took ownership of their education and art, and they built their productions from the ground up – brainstorming, researching, collaborating, writing, critiquing, producing, performing and problem-solving in a real-world theatre company.”