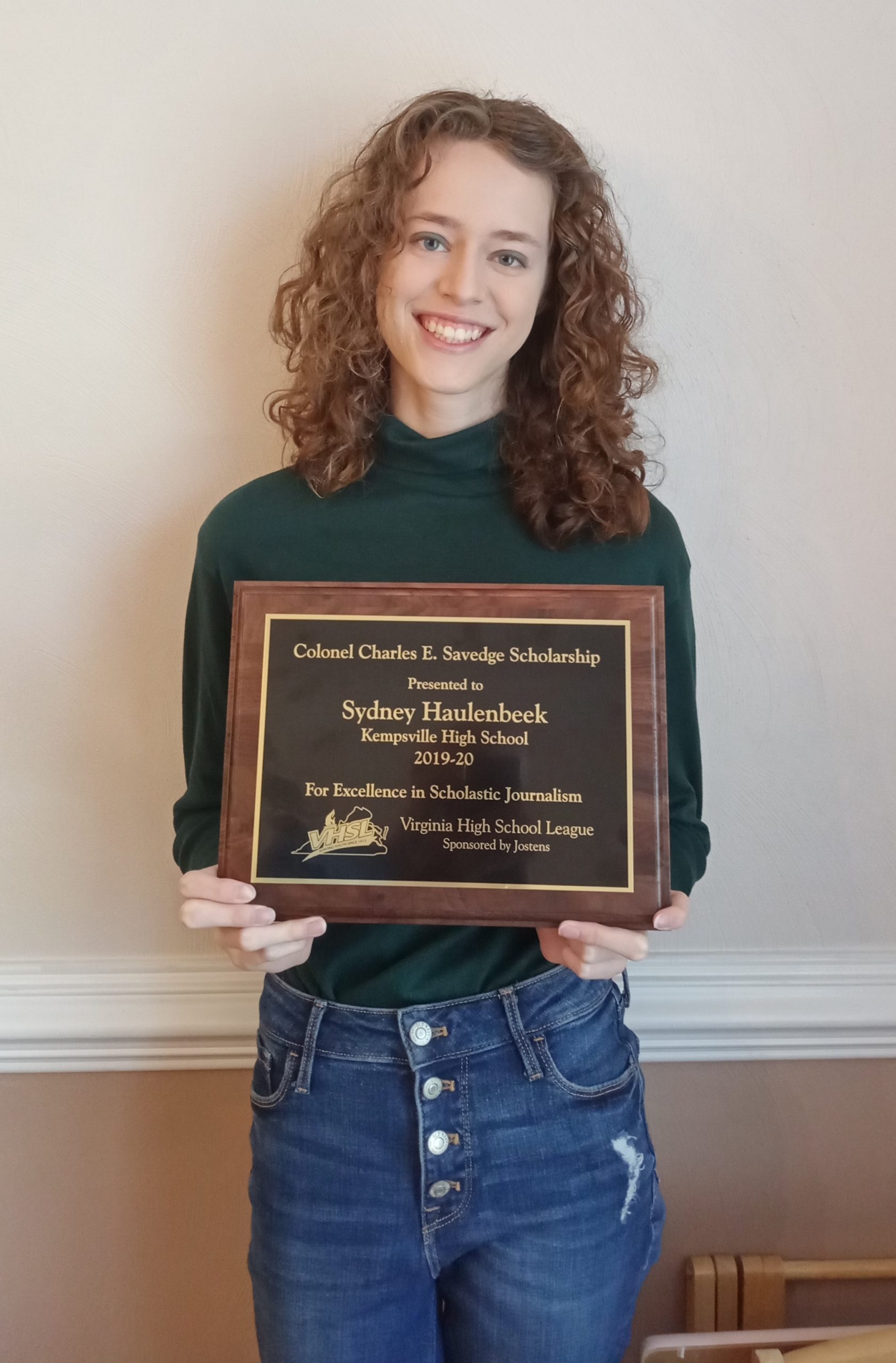 Crediting journalism for defining her high school experience and making her “the person I am today,” Haulenbeek confessed that she came to Kempsville with a passion for creative writing but enrolled in journalism and was instantly hooked. “I love researching and writing and it is a wonderful blend of the two,” she said. “Looking back now, there were definitely clues that I might end up loving journalism. When I was 10 or 11, I helped to produce a magazine and newsletter with my neighborhood friends, of which there are still messy copies floating around in my desk. I’m glad my writing has come much further than 10-year-old scribbles and notes.”

Haulenbeek has written for Kempsville’s newspaper, The Treaty, for four years and spent the last two as editor-in-chief. She’s also served as editor and photographer for Image, Kemspville’s yearbook, and has contributed to the literary magazine Montage. She said that she is “never satisfied with my past work,” but points to two recent articles as her favorites from her career at Kempsville.

“Bathroom Beautification” was the project that earned Haulenbeek the scholarship. “I followed the bathroom beautification for about a year before the first painting project – in the article you might notice photos I took around the first meeting – and although I wasn’t involved in painting it was a bunch of fun to cover,” she explained. “I love descriptive intros, and I tried to express in that piece that lighthearted joy that all of the girls involved were emitting, and it was definitely contagious.”

The other piece she is particularly fond of is “Ms. Baker Spends Saturday Setting up ‘Be a Santa to a Senior.’” “It honestly was just really refreshing to see that much positivity going around,” remembered Haulenbeek, “and also to see the work that is put in behind-the-scenes that many students don’t get a chance to see.”

Kara Kimball has been Haulenbeek’s journalism teacher since her freshman year. “Sydney has a natural talent for writing,” she said. “She grasps the complex ways language can be used and understood, from a younger age than most. As a student journalist, she has taken on the mantle of an art that is being publicly scrutinized and diminished every day. Instead of letting this daunting task scare her, Sydney has faced the challenge with resilience and perseverance, sometimes standing up for truth to adults that should support her.”

Haulenbeek plans to attend Old Dominion University, study communications and journalism, and pursue a media career. “I think I may eventually end up doing format organization and writing for a magazine,” she mused, “or I may make my way back to newspaper staff; only time will tell.”

An alliance of Virginia’s public high schools, the VHSL establishes and maintains standards for student activities and competitions that promote education, personal growth, sportsmanship, leadership and citizenship. The Charles Savedge Scholarship / Student Journalist of the Year Award is named in honor of a publications adviser who was affectionately known as “Mr. Yearbook.” The award began in 1991 when Jason Roop, editor of Style Weekly magazine in Richmond, was the first recipient. Each year, VHSL member schools may nominate one candidate for consideration.