William Jucksch has had 70 years to reflect on the things he had seen; to consider the possible motivations and inspirations for the men behind it. He has lived a full life, one that could give him new or different perspectives. He has traveled the world and seen different cultures, different ways of life.

However, seven decades later, and he was just as much at a loss to understand as ever before.

That is because there is simply no good explanation for what has been done.

“It’s really impossible to believe one human could do this to another human,” Jucksch said. “It’s hard to get your head around. You’ve got to get your arms around the horror.”

Jucksch served as part of the 71st Infantry Division during World War II, and fought under General George S. Patton. During his time abroad, Jucksch fought in battles through France, Germany and Austria.

It was while marching through Austria that Jucksch and his brothers in the 71st would make history: They liberated the Gunskirchen Lager death camp. It has been estimated that close to 17,000 prisoners were brought to this camp during its time of operation.

Jucksch, now almost 90-years-old, was a special guest speaker at Salem High School, where history students packed the school’s schola to hear his firsthand account of witnessing one of the most heinous acts in all of history. 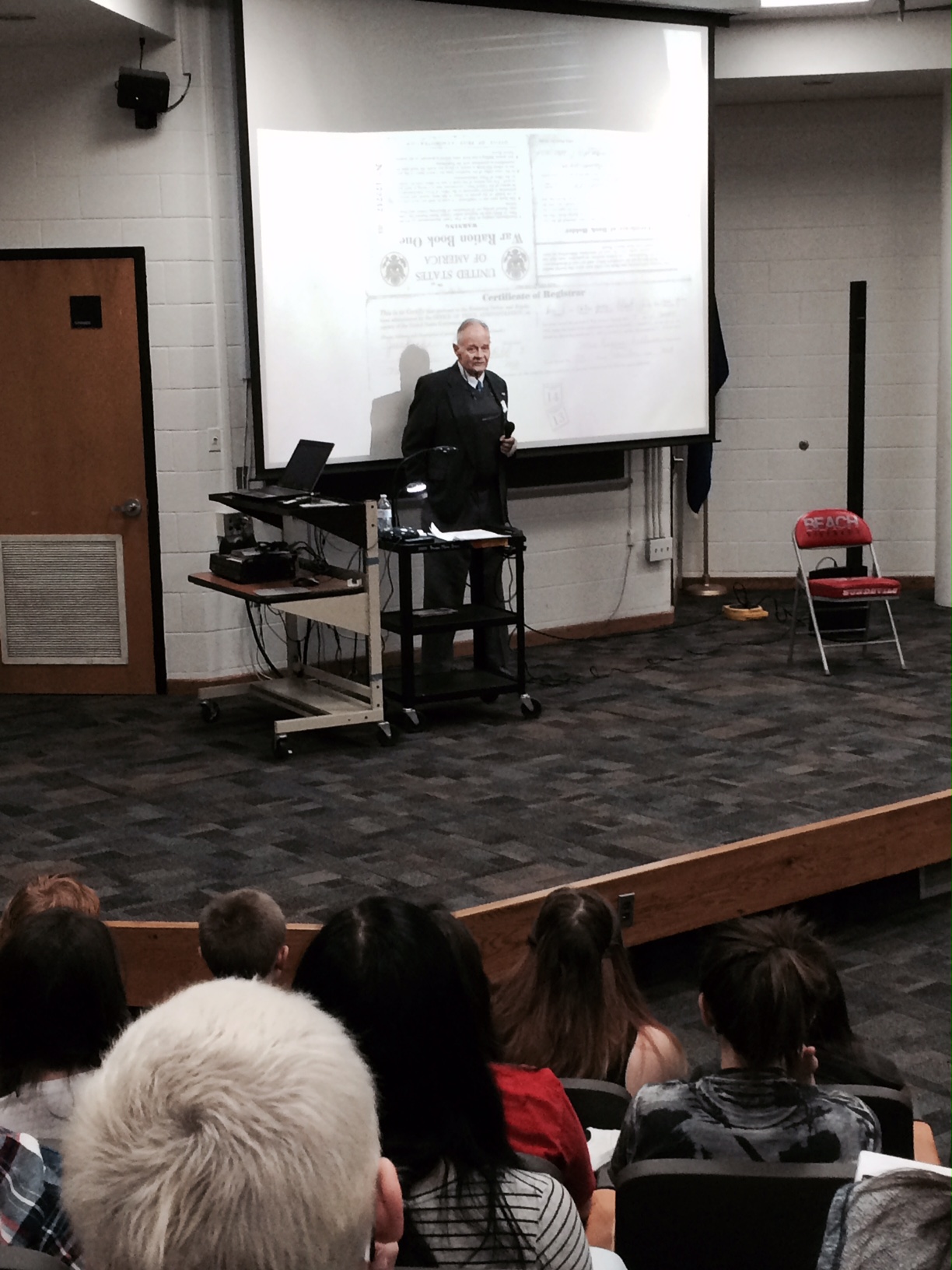 The day was like any other, Jucksch told the students. His division was on a scouting mission, looking for a solid high point where they would be able to overlook an intersection. It seemed all of his days in the army, he joked, were spent looking for high points. While on their way in this heavily wooded area, they “stumbled upon” an inconspicuous trail.

This trail led to a gate – a gate barely large enough to fit two cars through side-by-side.

However, as the gates opened, thousands of dead, dying and starving people were waiting for the American troops to find.

The memory of the sight so powerful that when Jucksch first tried to describe the victims, he was overcome with emotion.

“(They were) insane with hunger,” he said to the students, fighting back tears and his voice breaking for the first and only time during his talk. “Ugh, it’s hard.”

When he regained his composure, he returned back to the horrific sights of the camp.

“We never had seen anything like it before,”Jucksch said. “These walking skeletons are (crawling) out of these shacks. They look worse than anything you’d see in a horror movie.”

They knew they needed help, and a lot of it. Jucksch was a radio operator, and called in the need for soldiers, doctors and medics to immediately come and bring aid. The camp’s prisoners were of different nationalities, including Polish and Hungarian, making communication difficult, however; it was clear the presence of the 71st was nothing but a signal of joy and hope for all trapped inside.

“They were so thrilled to see Americans,” Jucksch said, adding that the victims – too weak to walk or move – would just grab on to soldiers’ feet and legs, almost as if to confirm they were really there.

Seeing the desperation around them, Jucksch and his fellow soldiers gave everything they had to the camp’s prisoners: their rations, their water and, if they were smokers, their cigarettes.

Yet, hunger overcame any nicotine habit.

“They chewed and ate the cigarette,” Jucksch said. “Starvation is a terrible way to die.”

Some would call camps like these concentration camps, a term many use to describe any of the more than 300 prisoner camps throughout Germany and Austria that the Germans had created.

However, Jucksch made sure to point out an important difference.

Concentration camps were war factories. Places where prisoners were turned into slaves, and tasked to become part of the war production effort – building necessary supplies for the armies on the front lines.

Gunskirchen Lager was not that.

For more than an hour, Jucksch walked students through his experiences, not only of the liberation of Gunskirchen Lager, but also his time in combat in Europe.

His visit was part of a broader project, “Remember the Heroes,” which will take place Memorial Day at the oceanfront. The project aims to bring attention to the country’s military heroes and heritage, and Salem students will be participating by creating banners commemorating the 70th anniversary of the Liberation of the Auschwitz Death Camp.

Jucksch, and the 71st Infantry Division, will also be added as a part of the project.

Following his presentation, students had the opportunity to ask Jucksch questions. 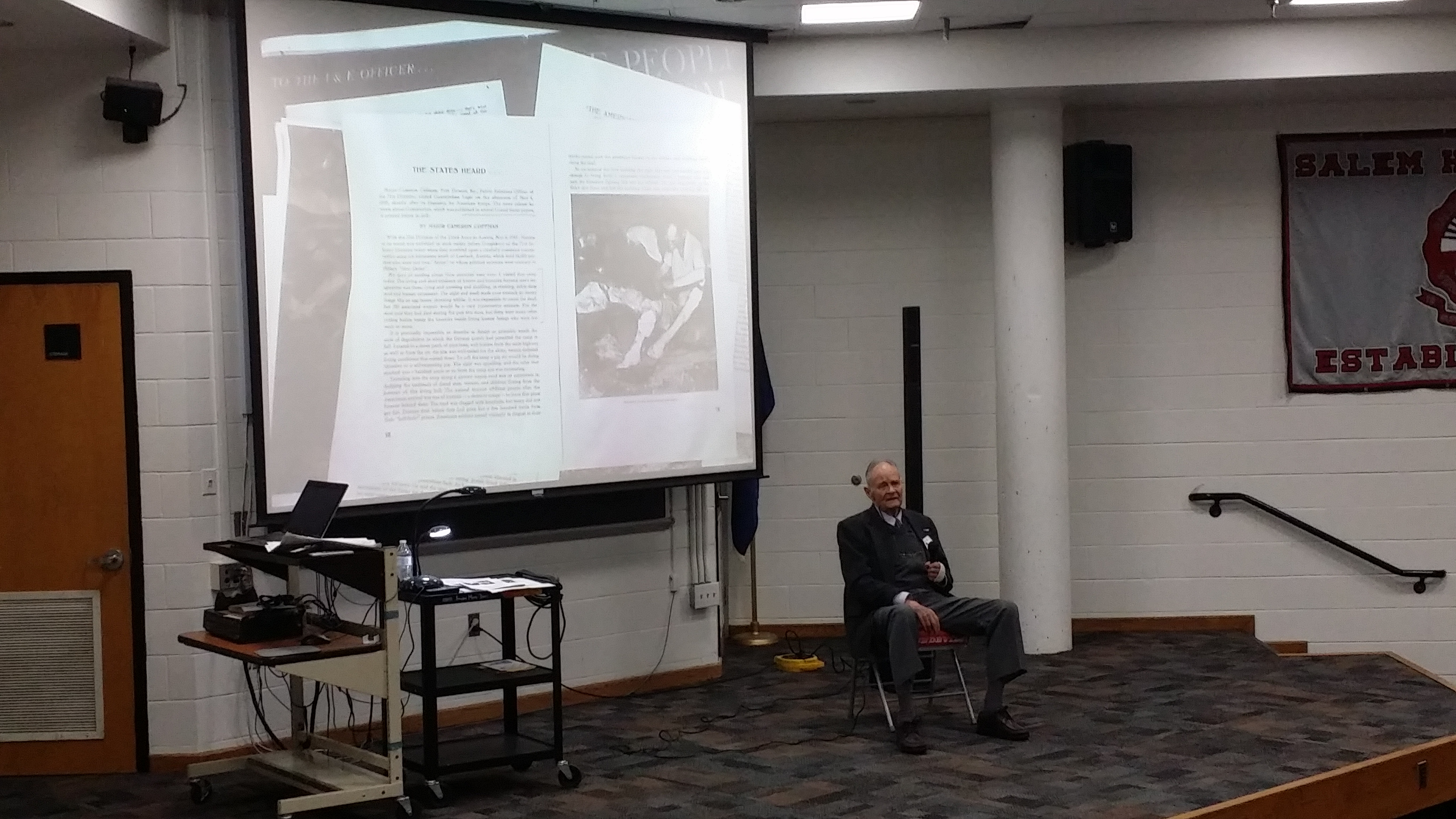 The time allowed for moments of hope as well as brevity.

When asked if Jucksch ever kept in touch with people from the camp, he pointed out that about 10 survivors from Gunskirchen Lager migrated over to the United States.

Every year, an association made up of former members of the 71st holds a reunion to reconnect and reminisce.

Those survivors are honorary members of the association.

“They are tremendous people,” Jucksch said. “We were just doing our job, but they think we’re angels.”

Another student asked what Jucksch was doing when he found out the war was over. His story brought the biggest laughs and smiles of the day.

As it turned out, his division was again on a scouting mission, looking for another high point, when they ran into a ragtag group of Russian scouts. The allies realized that their crossing paths meant good news for the war effort, and it was the next day that the Germans surrendered.

Being with the Russians at the time had certain advantages.

“They traveled with vodka,” Jucksch said with a smile. He admitted that he enjoyed two drinks with his new Russian friends.

“I’m not sure I remember – or want to remember – the rest,” Jucksch joked. “So, we partied. We partied. You’d never seen such an enthusiastic group.”

Now, 70 years later, Jucksch has traded in his day-to-day work. In 1945, he was helping to find the high points. In 2015, he is helping students connect with a history that should never be forgotten.

“I consider it like a job,” he said of speaking with these students.

“That’s what I’m trying to take you back to, those days.”