Ask Principal Charlene Garren if Alanton Elementary School is ready to see their new library and just like in hit television home makeover shows, she will respond with a resounding “yes!”

Alanton’s library is one of 16 school libraries being renovated from top to bottom in what Virginia Beach City Public Schools (VBCPS) Office of Facilities Services has dubbed “#FlipMyLibrary.”

The concept – and the name – were the brainchild of the school division’s Executive Director of Facilities Services Tony Arnold.

“We’ve been replacing and modernizing our older buildings and when we do that, they get a new library,” Arnold stated. “We had talked about buying furniture to help out these other older schools that have 30-, 40-, 50-year old libraries, but then after talking with our School Plant team, it morphed into ‘let’s flip this space.’”

Without hesitation, School Plant, the office that repairs and builds items across the school division, volunteered to remove the fixed furniture, patch walls, paint, install carpet and even build most of the cabinetry. 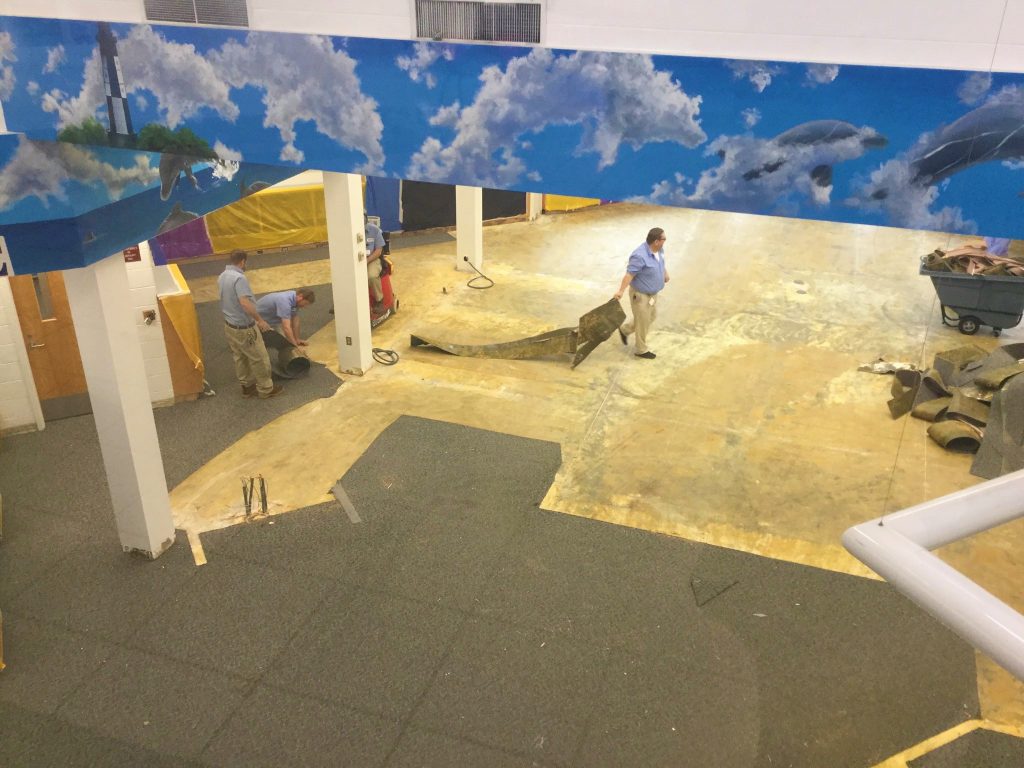 “We then asked all librarians to tell us about what they would do to create their dream library,” said VBCPS staff architect Don Bahlman, who is managing the project.

To narrow the field down to the 16 projects that the $2.1 million capital improvement project (CIP) could fund, schools were invited to submit proposals.

And proposals rapidly rolled in.

“We were super excited,” said Laura Faulkner, library media specialist at Corporate Landing Elementary – another one of the 16 schools eventually selected. “We also surveyed students asking them what type of seating they would like and if there’s different materials or spaces that they would like to see.”

What were the wish list items that floated to the top?

“There were similarities but each one was different,” according to Bahlman. “Everything is tailored to the needs of that school, but they had a lot of similar requests: more floor space, more tables, and everything on wheels so the students could move around and collaborate.”

“Just having the availability to reconfigure the library so it will work for students as well as staff was important,” according to Faulkner.

“We want students to be able to move around and have flexible groups, especially in our library. It was very small down there,” she said, recalling the fixed bookcases that were affixed in a perpendicular fashion to the walls.

Not only that, but large immovable bookcases were attached to the floor in the middle of the library. 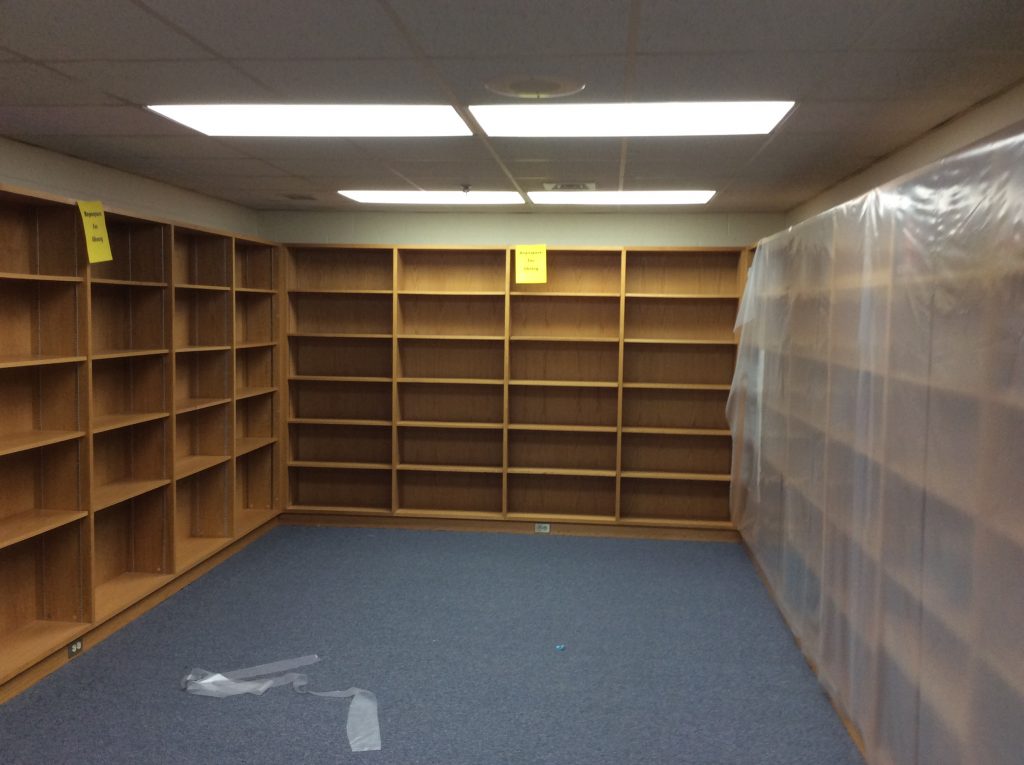 “Really, the only space available was in the center,” according to Corporate Landing Elementary School Principal Kelly Coon. “The space was so rigid and fixed. The instructional space was so limited.”

“We had those tall big bookshelves that were taller than the kids and where kids couldn’t reach,” she said. “We had to have tons of stools and the younger students still couldn’t reach. Our circulation desk was also way too big for our needs and the Makerspace was kind of hodgepodge at four different places in the library.”

The #FlipMyLibrary project will change that for the nine elementary schools, four middle and three high schools selected to undergo the makeover:

“Just everything on wheels was the common thread that went through all the libraries,” Bahlman shared. “They wanted things to move around easily, stack or be moveable. They also wanted fun shapes, upholstered furniture, various places to study, charging stations and even ergonomic chairs that allow students to move while sitting.”

For Thomas, the flexible spaces and moveable furniture will better suit the school’s needs.

“It’s a working library. Kids are in and out checking out books. Kids come in to work on research projects, but it’s also a place for small group collaboration and a space where I teach whole group lessons,” according to Thomas. “It will now fit what we need for our kids.”

Alanton’s library will also have a reading lounge where students will be able to comfortably sit on couches or chairs to enjoy a good book.

“Students can basically now tour the world right here in the library,” Thomas said describing the goggles and other technology that were purchased with book fair money that she had been banking over the last two years in order for the school to make improvements to the library.

But now, thanks to the #FlipMyLibrary projects, Thomas instead was able to purchase materials for the library.

As the first groups of libraries undergo their makeover, students are following the progress.

At Corporate Landing Elementary School, students walking by can be seen peeking in through the glass windows. The school even taped up the new floorplan for students to follow the changes.

Over at Alanton, Garren said School Plant workers have welcomed bringing students in and even seek their opinions.

“I have to say that the VBCPS team that has been in there doing the renovation has been absolutely amazing,” Garren shares. “Not only are they really good at what they are doing, they are kind and courteous and they like to involve children in decision making.” 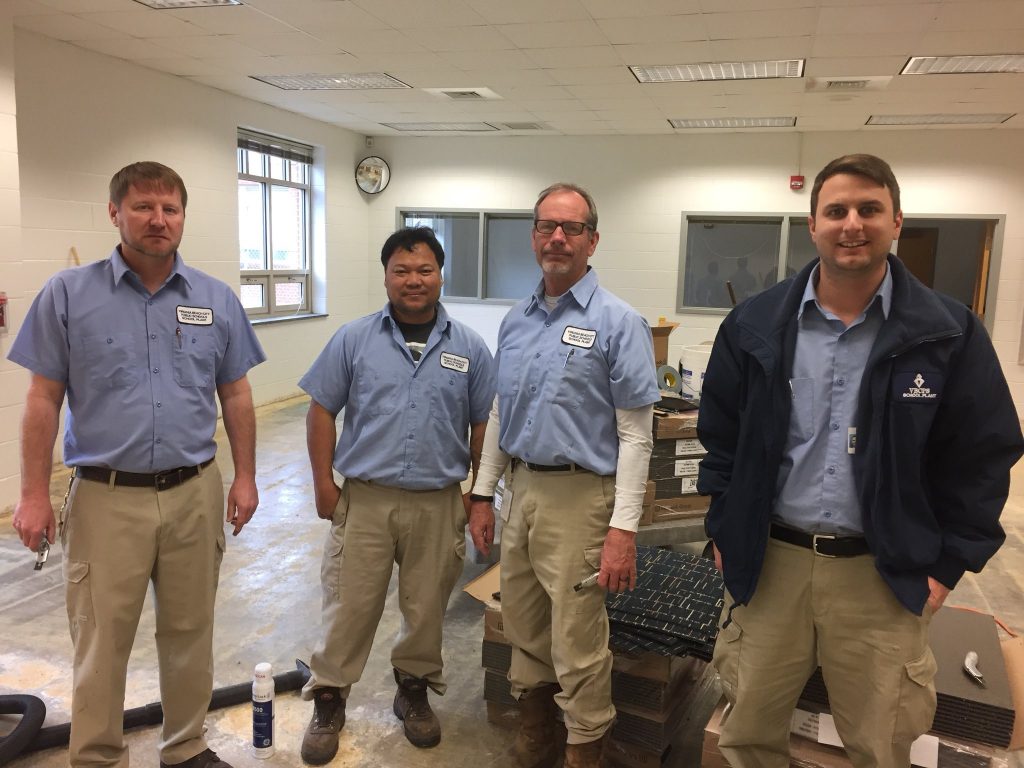 According to Garren, seeking staff and student input started in the beginning with paint colors.

“They’ve been giving us suggestions, asking us what we think – even allowing us to bring in the students to ask their opinion on paint colors since students were peeking in through the window and door.”

Students even had a say into how the carpet squares would be laid. 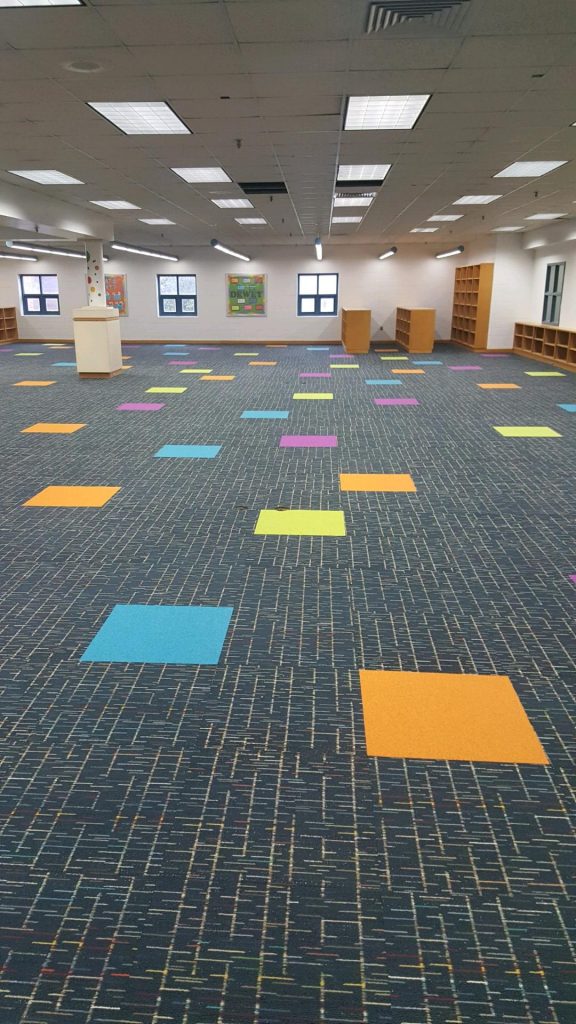 “When the carpet squares came in, they asked the kids what they thought and were giving them options by zigzagging the squares for them or placing them all in one direction. It was fun,” she said.

Students and staff at Alanton won’t have to wait much longer to see the finished product.

Their library, which was the first one started in January, is scheduled to be completed right after spring break. Although the library will open its doors at that time, the school is also planning a celebratory grand opening the evening of April 18, which coincides with the school’s “Young Authors Night” with parents and students.

All 16 renovations, which are staggered to suit the programmatic needs of each school, are scheduled to be finished by Labor Day weekend in September.

“It’s a modern pop of fun,” Thomas said. “It’s an exciting space and, most of all, it’s so kid friendly. I can’t wait to see the students’ faces when they see the space.”