The challenge: Create a stock from scratch.

The ingredients: An abundance of fresh fruits, vegetables, and spices, such as cranberries, celery and peppercorn. 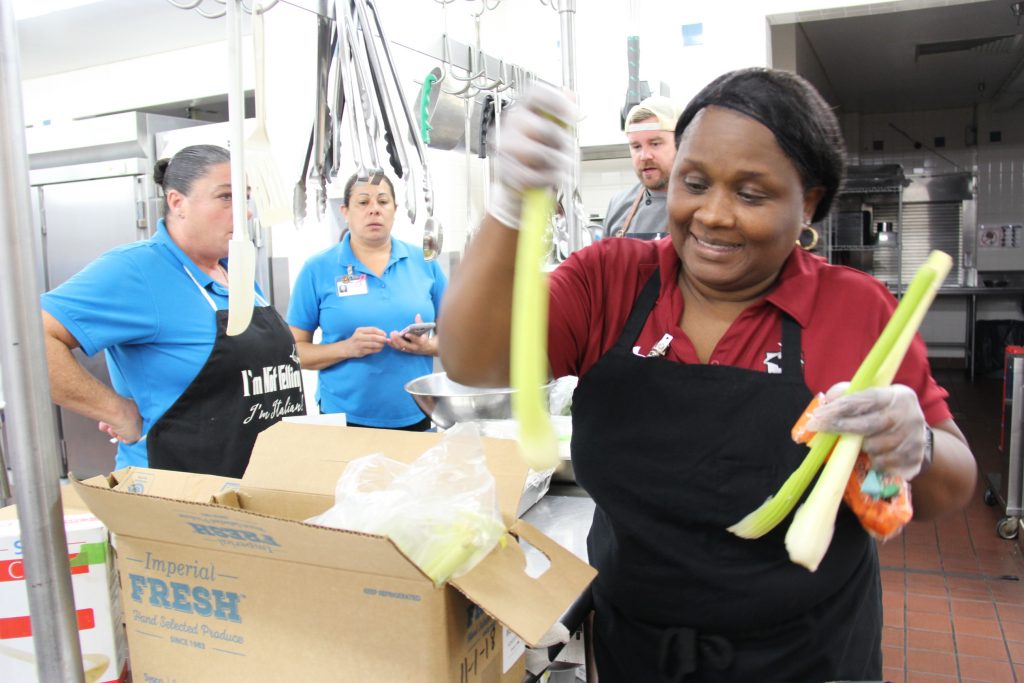 No, this wasn’t an episode of the Food Network’s popular television show ‘Chopped.’ It was one of the classes that that the district’s new chef Kip Poole is hosting for cafeteria managers and aspiring cooks to learn the basics of scratch cooking. This one focused on stocks.

“We’re holding classes almost weekly and soon biweekly,” Poole said. “Our main goal is to train every cafeteria manager and assistant manager by next summer. We’ve done classes on knife skills, salad dressings, different types of greens and now we’re really getting into the main focus and that’s stocks, which are the main building blocks of sauces and soups.”

After a sample lesson on how to make sachet bags using aromatic and flavorful herbs such as thyme, the 20 attendees, who are cafeteria managers and assistants from across the division’s schools, scuttled to gather in teams of three or four to set up their stations. Their assignment: Create a stock and then use it to make a soup or a gravy. 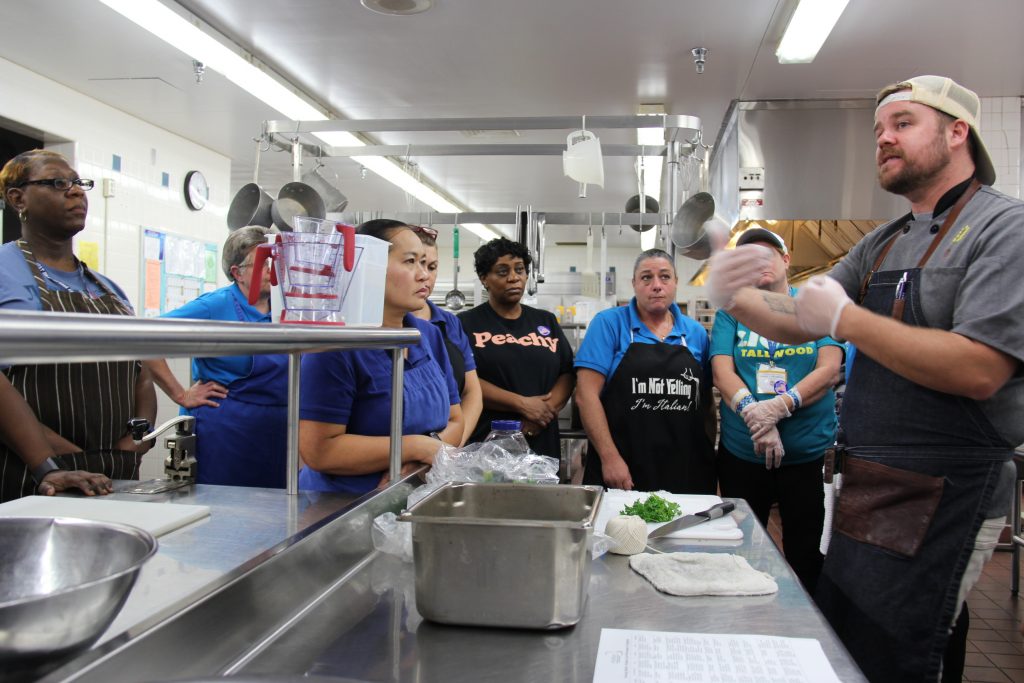 Teams began by looking over the class handout, which detailed how to make a stock. Next, they started on their ‘mise en place,’ a French culinary term taught to them by Chef Poole which refers to prepping of ingredients, such as dicing or measuring, before the actual cooking begins. 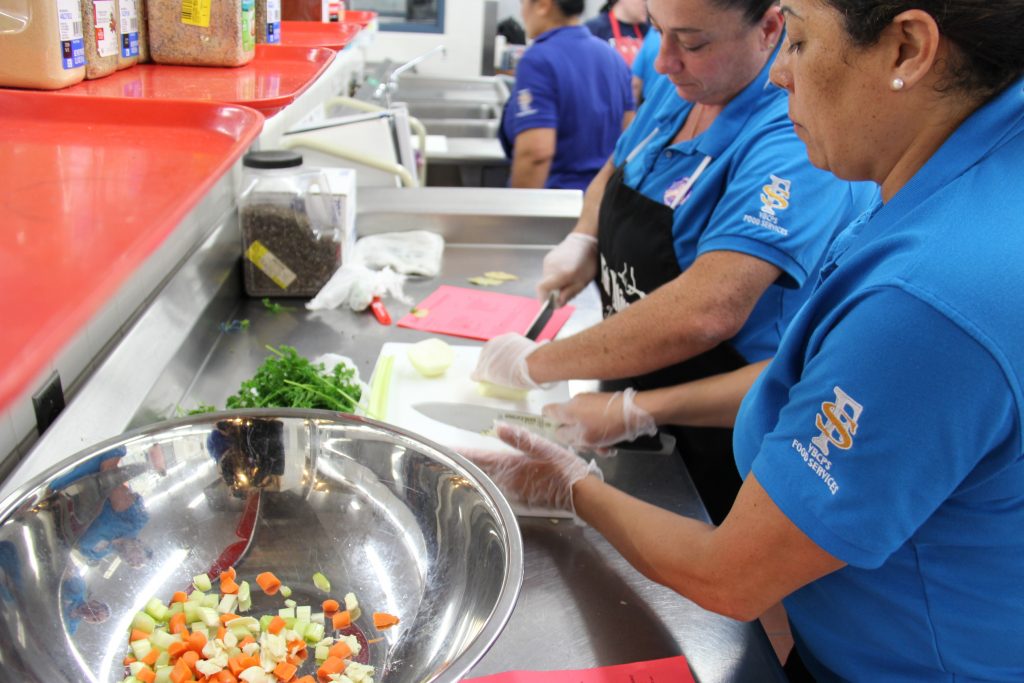 Kempsville Middle School’s cafeteria manager Dee Brown and her group, whom they named Team Sachet, were working on a turkey tetrazzini gravy. 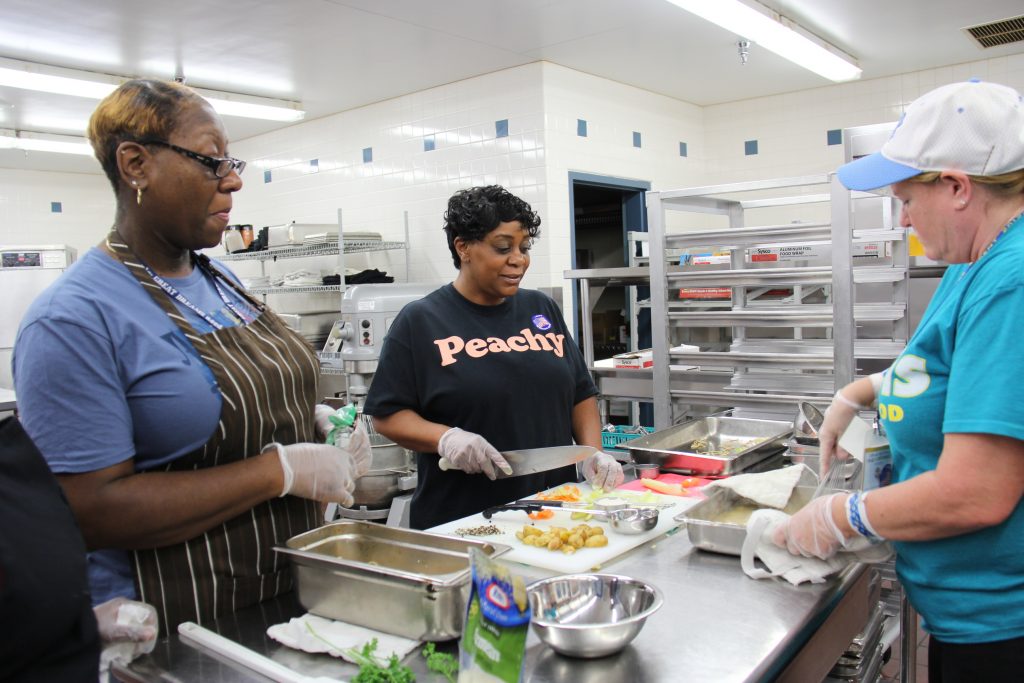 “It’s really an awesome class,” she said as her team diced onions and potatoes. “At first, I was a little apprehensive. I thought it would be real hard but it isn’t. It’s real hands on and he’s here to help you. Just the different things that he’s showing us are important– like how to properly cut an onion.”

Collaborating with staff from other schools is also a perk.

“You get to work with others,” said Brown. “And, these ladies are very creative so I’m having a good time.”

Two stations over, cafeteria managers Carol Karpovich and Luz Bonet from Glenwood and Shelton Park elementary schools, respectively, were working on a French onion soup – something which neither of them had cooked before. 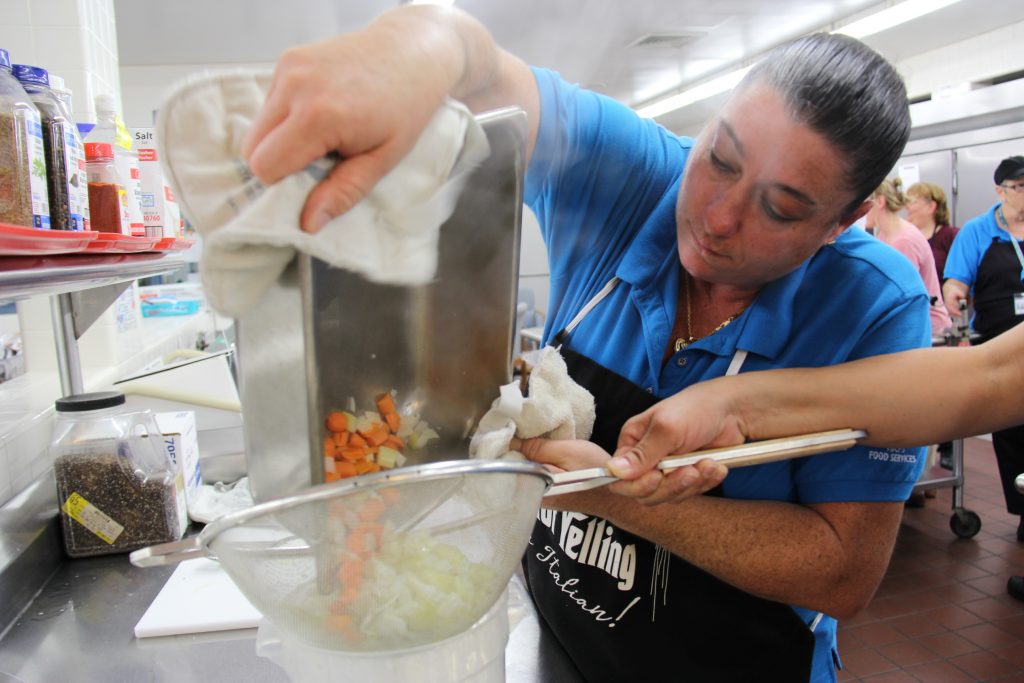 “We’re trying it out,” Karpovich enthusiastically said. “We looked up the recipe, which we are allowed to do. We could try things that we’ve already tried at home, but what’s the fun in that. We want to learn.”

Over on the other side of the kitchen, the team of two cooks and one baker hired to assist Chef Poole develop recipes for the scratch-cooking program were working on an Asian noodle bowl.

“The struggle is to get the portion size right, that the vegetables are right and that the sauce is right,” said cook Kimberly Freeman, who has worked in numerous professional kitchens with Disney and well-known cruise lines.

“We have to finalize it because the [school division’s] nutritionist will come to test it. She’s going to break it down and ask about the sauce, sodium, etc. We have to make sure it’s 100 percent accurate for our guests.”

Asked about her reference to guests, she took pride in stating that’s how she views students.

“I see them as guests because we are the chefs and they are the guests in our cafeteria,” she stated as she headed back to check on the teams who were finalizing their soup and gravy creations.

Her first stop was with Team Kitchen Witches who had prepared a Thai turkey soup. 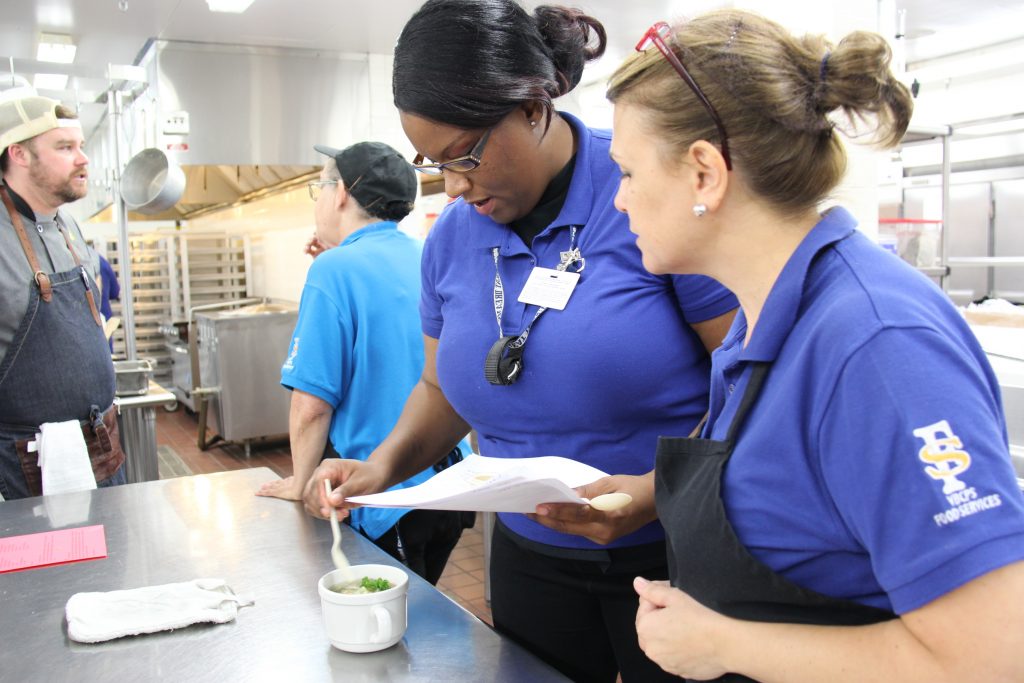 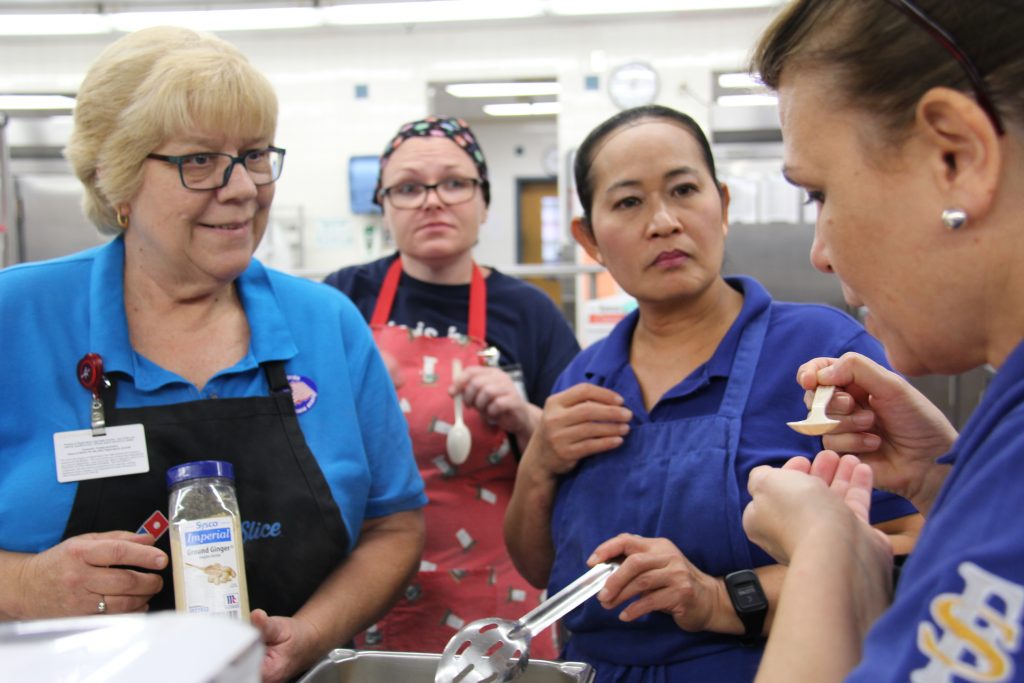 After tasting it and giving the team praise for the Asian inspiration and flavor, Freeman headed to the next group, Karpovich and Bonet’s team, to taste the French onion soup.

“Yum. I can taste a nice hint of lemon or lemongrass,” she said. Freeman also applauded them for thinking outside of the box.

“We don’t technically grade them but they do follow a rubric to make sure they are following guidelines and to provide them feedback,” said Chef Poole.

That rubric is the same one used by the National Educational Restaurant Foundation, ProStart, which is used with culinary students. Teams are evaluated on sanitation, time management, product waste, ‘mise en place,’ work station cleanliness, technical skills such as knife use, correct use of kitchen equipment, proper attire and teamwork. 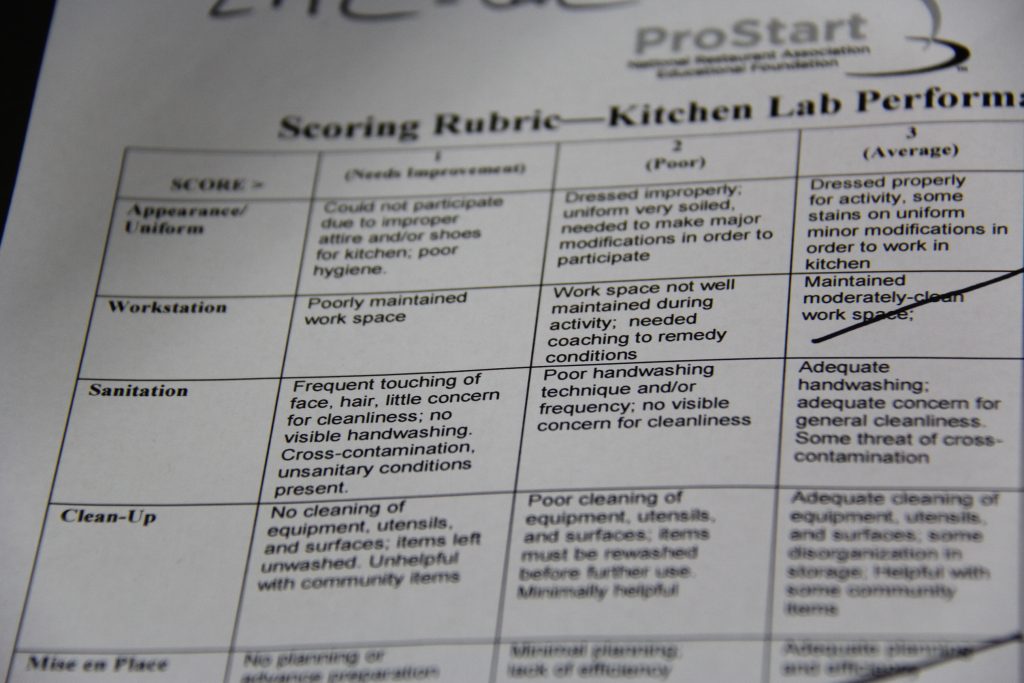 “We are seeing a burst of energy in the cafeterias since these classes started,” according to Poole. Upcoming classes in December include Cooking Methods I and Cooking Methods II, and a variety of other offerings will continue throughout the school year.

“We are learning how to put different flavors together,” said White Oaks Elementary School cafeteria manager Terri Park. “Some of them you think ‘oh, that’s not going to go together,’ but then you put it together and it actually tastes pretty good. This was a good lesson for me today.” 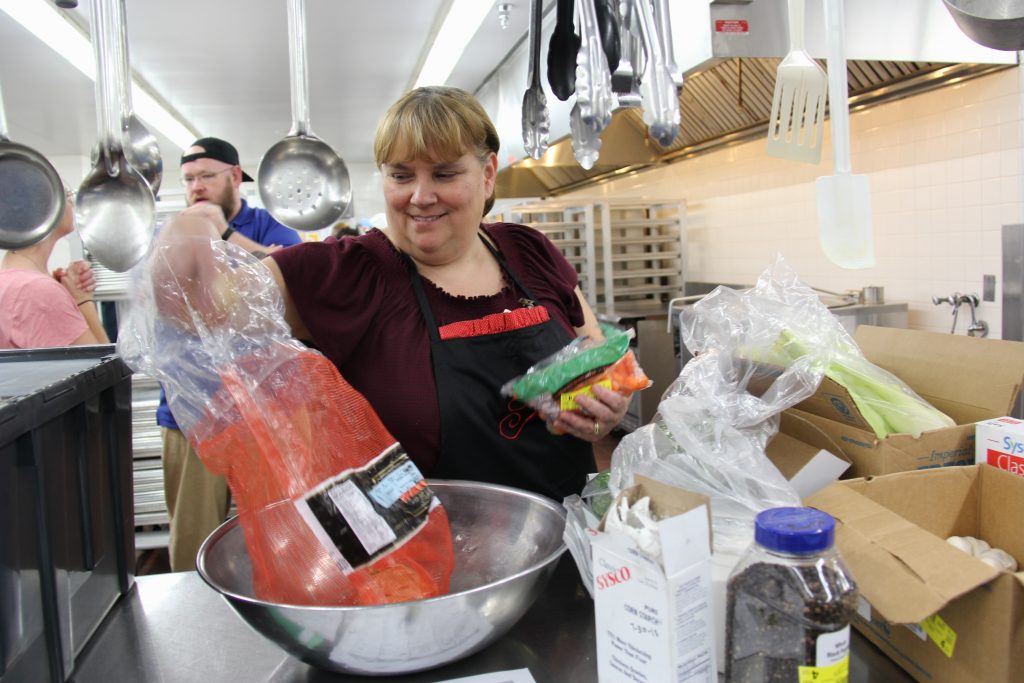