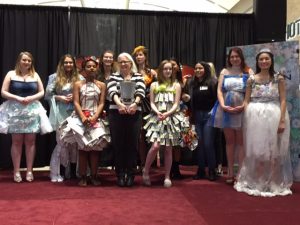 he school’s “Garbage to Glam” project challenged students to think about consumption, recycling, waste and reuse differently, given the recent shifts in how waste can be recycled. With help from Lynnhaven River NOW, students conducted pre- and post-project surveys about attitudes and awareness of consumption and recycling, conducting a waste audit that culminated into designing and creating outfits and accessories for the “Lynnhaven Trashion Show.”

Now in its third year, the Green Apple Day of Service Awards received dozens of nominations from projects all over the world that have inspired their schools to cultivate a greater sense of environmental and community stewardship. The honorees reflect the global commitment to the green schools movement.

Awards were presented across three categories. FCHS and Lynnhaven River NOW were recognized for creativity in application. The other two groups were depth of student and community transformation and scale of community engagement.

“The actions of community volunteers to join together with students and teachers to showcase sustainability leadership continues to inspire us,” said Anisa Heming, director, Center for Green Schools at USGBC, in the recipients announcement. “The diverse group of Green Apple Day of Service projects that we honor this year represents dedicated teams that have worked together to raise the volume in their communities and prepare the next generation of sustainability leaders.”

The “Trashion Show” on February 23, 2020 drew upward of 4,000 people to Lynnhaven Mall and educated the audience about the amount of trash the community generates, the way it is disposed of and the consequences it has on the environment.

More information about the Green Apple Day of Service Awards can be found on their website as well as further details about the “Garbage to Glam” project.