“In Virginia Beach we are deeply connected to the military as are the rest of us here in Virginia. So I‘m really glad that we have colleagues from all over the state coming together today to share and to learn from one another what are those best practices that we can do to really engage with our military children, to support them through their transitions, and to help them identify all the incredible resources that are available to them not only in our school divisions but through our school liaison officers.” 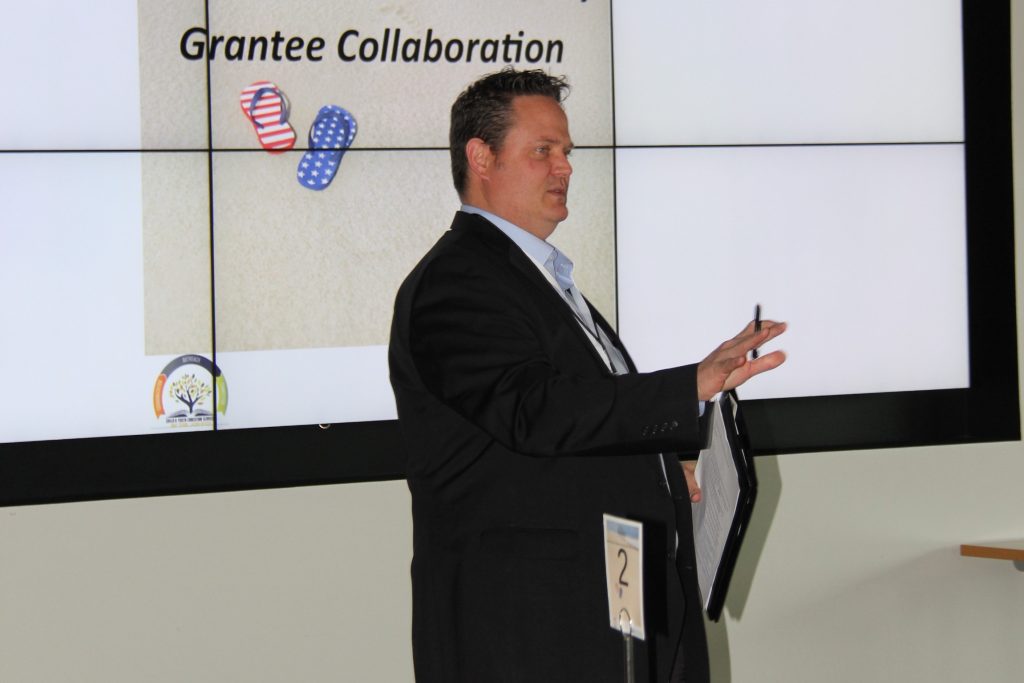 School liaison officers from various Virginia military installations were among the event’s attendees, joined by representatives from five school divisions as well as personnel from the Virginia Department of Education (VDOE) and from DoDEA.

Bringing together colleagues from across Virginia to discuss grant projects and best practices was initiated by staff in VBCPS’ Office of Student Support Services after they attended an event in November hosted by DoDEA and Military-Connected Local Educational Agencies for Academic and Support Programs (MCASP) that was attended by grant recipients from various states.

“We found ourselves reflecting on the benefits of being able to collaborate with all grantees; however, we walked away with lingering questions specifically pertaining to what was going on in Virginia,” said Natalie Meiggs, VBCPS coordinator of military-connected and academic support programs, in her welcoming remarks. “Knowing the Commonwealth is the largest federally-impacted state, we felt it was imperative that we come back and not only reach out to grantees but that we extend this opportunity beyond grantees in school districts.”

“We hope today offers the opportunity to learn about sustainable practices and key information to provide support to military youth and their families throughout the Commonwealth,” said Meiggs.

To that end, the daylong program included presentations by representatives from both federal and state agencies and from each of the school divisions in attendance.

Perkins began by echoing support for the collaborative nature of the event. 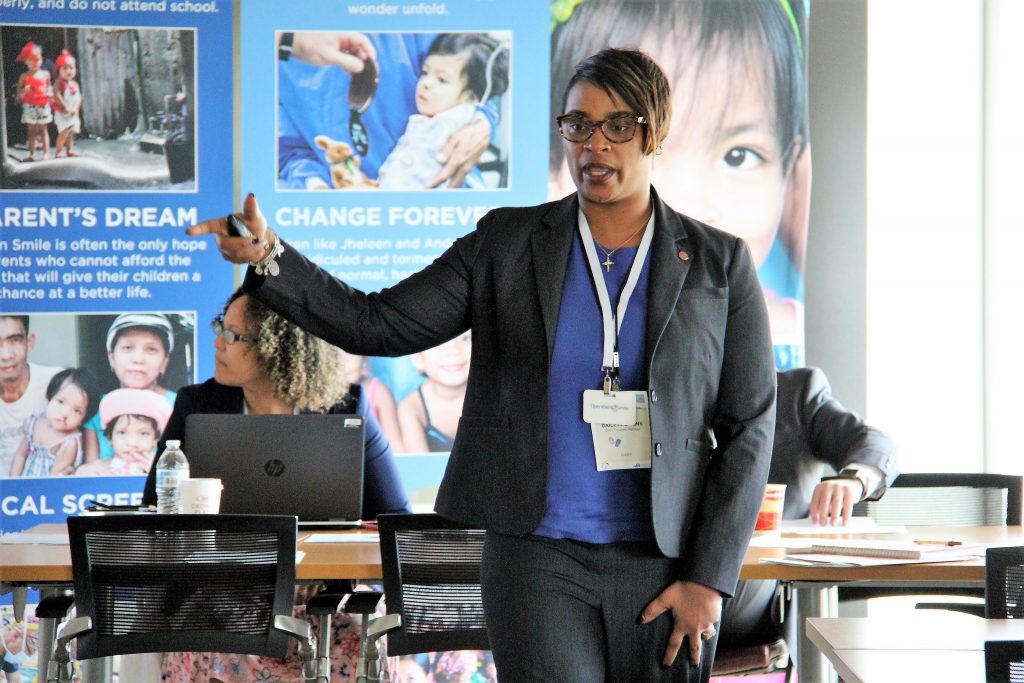 “I’m very excited that Virginia has decided, as some of our other grantee states have already decided, to take the initiative to come together to collaborate as a state. Though grants are a competition in nature, you do learn so much from each other.”

Presenting with slides Perkins said her team uses when responding to congressional inquiries about grant funding, she made note of the 12 operational military bases in Virginia and nine school divisions with active DoDEA grants.

“Though there are only nine active grants in the Commonwealth, we’ve actually awarded to 12 school districts [in Virginia] and these are the number of grants and total funding,” Perkins said, pointing to a slide displaying information for the years 2009 to 2017. 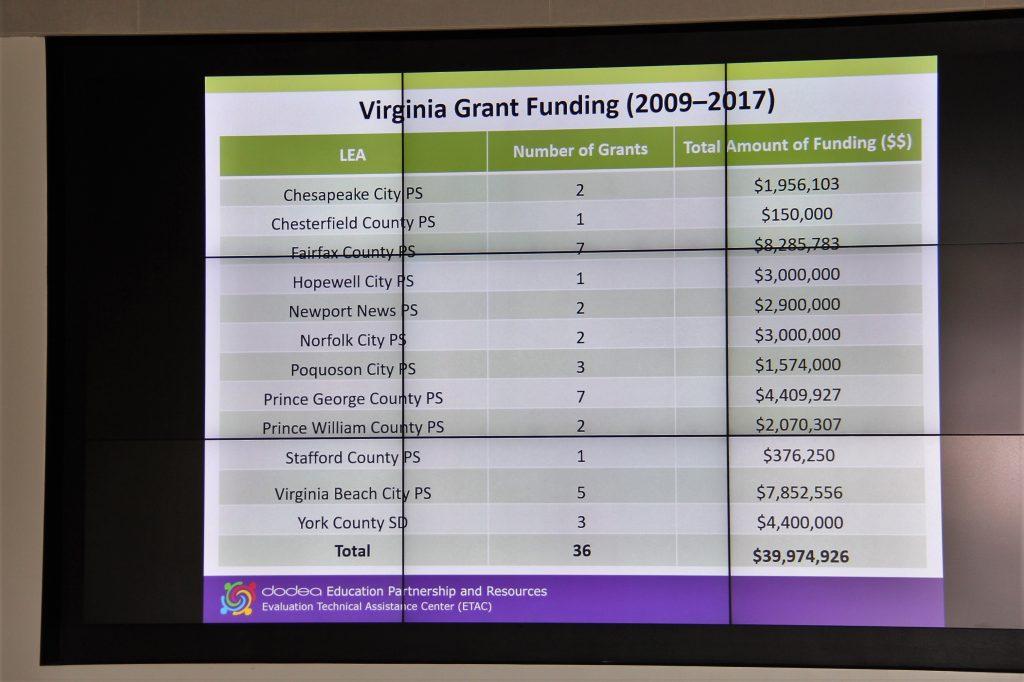 “The Commonwealth actually ranks fourth in the amount of funding,” continued Perkins.

“Since 2009, DoDEA has awarded nearly $500 million in grants and our top five states have received a little over 40 percent of that nearly $500 million, and Virginia is right there with almost $40 million. It’s actually over $40 million when we begin to talk about the National Math and Science Initiative (NMSI), but that funding isn’t on there because that funding goes directly to NMSI that implements the program in high schools.” 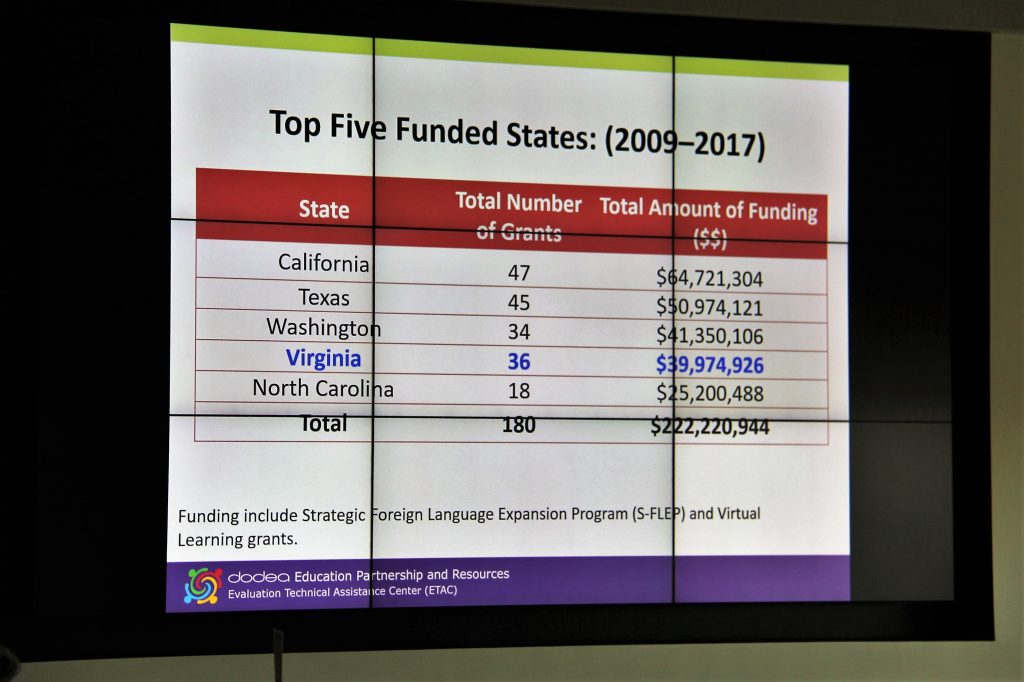 “This is the number for the fall count,” he said. “You see the highest population of military-connected students is actually here in your vicinity. We’re at 41,053 at the moment [in Region II]. The region that comes next is Region IV, and, as you see, we have military-connected families across the entire state.” 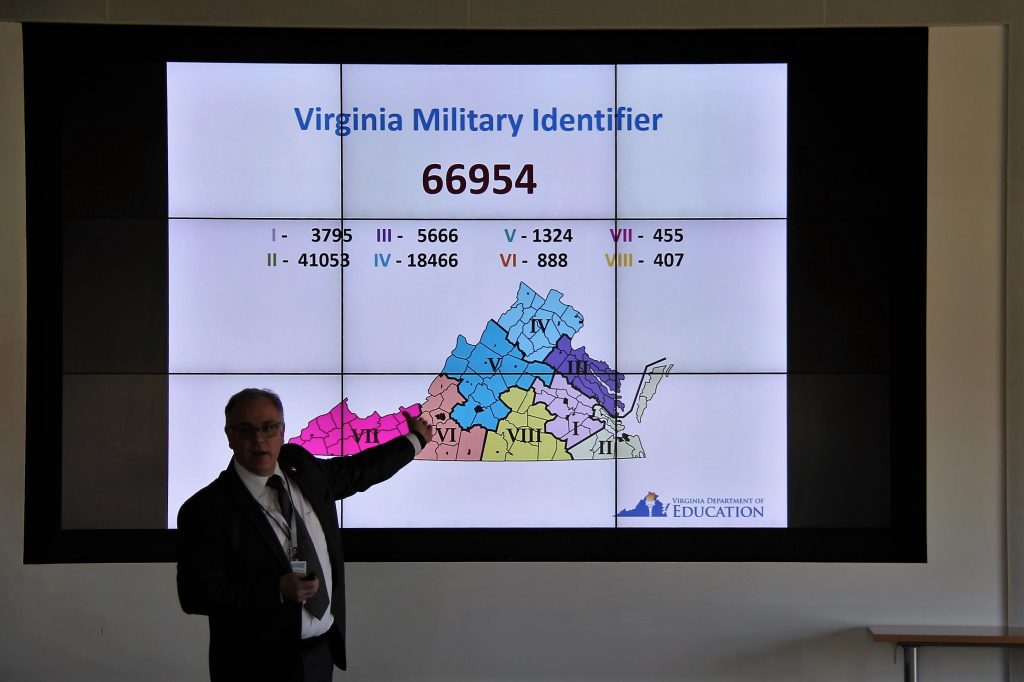 Dunham said he gets calls from those families as well as those relocating to Virginia. He has even taken a few calls from the Australian embassy. “Word has spread,” he said of his military family position with the VDOE.

He shared that the top five inquiries he receives, listing them from No. 1 to No. 5 on a presentation slide, are: SOL testing, verified credits and advanced diplomas; special needs navigation; preschool and kindergarten enrollment; school information and placement; and use of power of attorney. 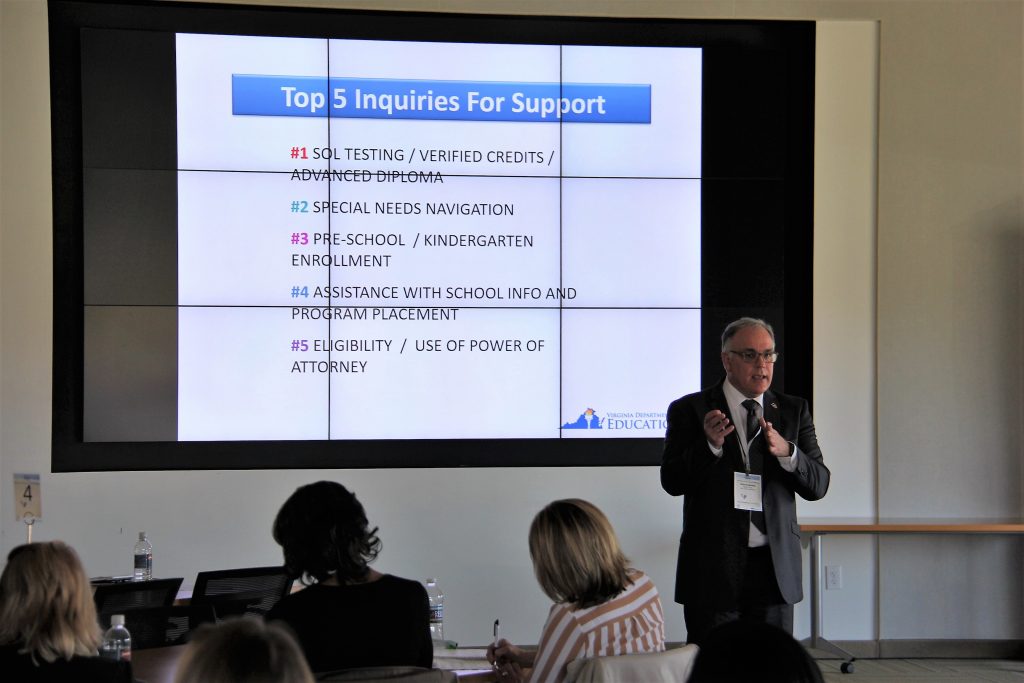 At a national workshop he attended, he learned the diploma issue is unique to Virginia. “There are over 100 different diploma variations across the country and this affects students when they transfer from place to place.”

Other topics Dunham discussed included: the Interstate Compact on Educational Opportunity for Military Children, Profile of a Virginia Graduate, academic and career planning, Virtual Virginia, revised Standards of Accreditation, and new state legislation. He also highlighted a new Purple Star designation in the final stages of development, which Virginia schools will be able to earn to show their commitment to serving military-connected students and families.

As a final presentation before attendees shared information with each other about their respective grant projects, VBCPS’ two military-connected school counselors, Star Wiggins and Amanda Yoder, and three school liaison officers supporting VBCPS described their collaborative efforts to support military youth and their families.

Yoder noted that she and Wiggins are in positions initially funded by a DoDEA grant that VBCPS decided to sustain because of the demonstrated value of having counselors focused specifically on the needs to military-connected students. Similar to Dunham’s work at the state level, the pair of counselors answer questions for families in transition, and cited similar concerns about curriculum and verified credits in addition to supporting students’ social-emotional needs. Professional development for staff and post-secondary assistance to students and families are two areas that Wiggins and Yoder have enhanced and expanded. 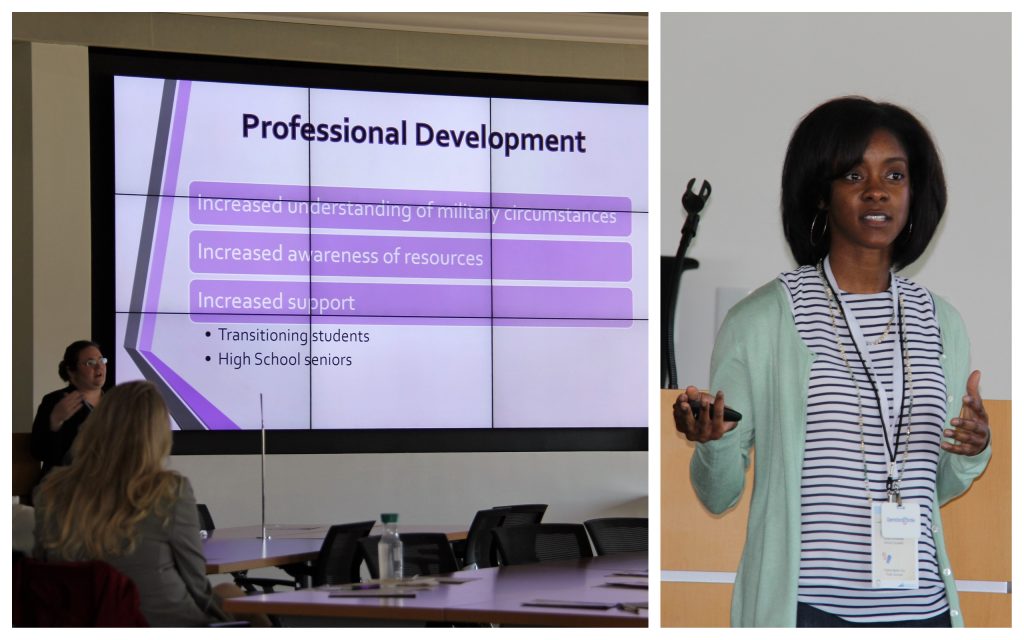 School Liaison Officers John Hammer, Karen Phillips and Vernell Kilpatrick highlighted their partnership with VBCPS on events and initiatives ranging from the annual NAS Oceana STEM Lab and Learning Day for all VBCPS fifth-graders to the Art of Being a Military Child art exhibit. 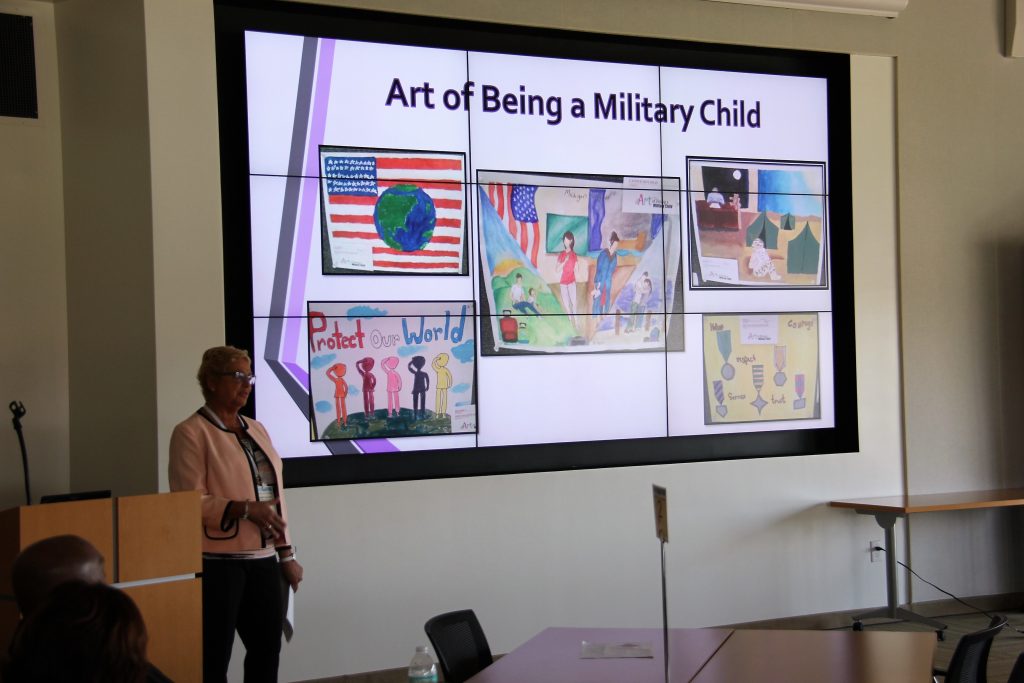 Working together and learning from each other was the theme of the day, and the afternoon session concluded with seven presentations about grants projects including: Operation Patriotic STEAM by Fairfax County Public Schools, Breaking the Code to College and Career Readiness by Norfolk Public Schools and World Class Military Dependent Students Marching Forward on Two Fronts in PWCS by Prince William County Schools.

The collaborative work by all involved was applauded by DoDEA personnel.

“I know the Navy has a saying, ‘Better Together, NCYP (Navy Child and Youth Programs),’ and we believe that same mantra at DoDEA,” Perkins shared. “I think the timing could not be better for you all to collaborate and discuss your ideas and what has happened in other parts of Virginia.”