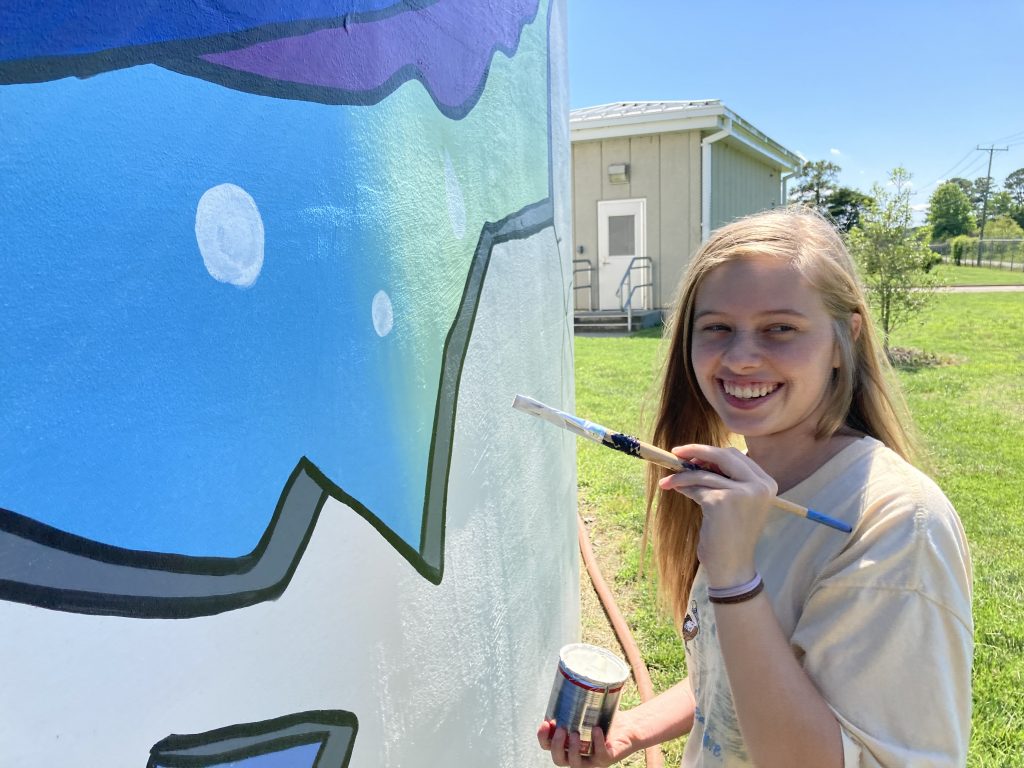 Nikki Boardman has been drawing since she could pick up a pencil. But it wasn’t until last year that she took her first art class. Doing graphic design on an iPad is also new to her.

It’s not surprising that she was hesitant to enter a contest where the winning artist’s work would stretch across a wastewater process tank in Virginia Beach. But her Ocean Lakes High School art teacher Lindsay Roberts encouraged her to give it a try, and now Nicole’s mural towers 20 feet over the ballfields near her school.

“I can’t believe this is happening,” the 15-year-old rising junior said during a recent visit to the tank. “It was six months ago that I came up with the design on my iPad. I didn’t think it would win. And to see it now is amazing.”

This past winter, the Hampton Roads Sanitation District encouraged young artists from Virginia Beach City Public Schools to submit designs for a “Water is Life” mural. Atlantic Treatment Plant employees voted on their favorite design, which was then reviewed by the plant’s beautification committee and the city’s public art committee.

In the mural, a sea turtle and dolphin swirl around a mermaid who is holding the planet Earth in her hand. Nikki said an environmental science class opened her eyes to humankind’s influence and the importance of being good stewards.

“I thought about having an animal as the focal point. Buts it’s humans who are in control, so that’s why I have a mermaid holding the Earth,” Nikki said. “We need to support clean water and life.”

“I was thinking about what happens when the sun shines through the water – it creates a kind of rainbow,” she said.

“Everything we strive to be is pictured in this mural,” he said, pointing out several of the aquatic images. “We’re environmental. We’re here at the beach. And we’re all about clean water.”

Nikki was always aware that the treatment plant was near her school, especially during outdoor marching band practices. But she never thought her artwork would be displayed there. On weekends during baseball season, hundreds of people pass by the facility, which is next to the ballfields at Ocean Lakes Park.

Nikki enjoyed collaborating with a professional artist, Eric Lindbergh of T.A.L.E.N.T. Murals, which has created works at several Beach schools and buildings. The ViBE Creative District consulted with HRSD on the mural process and helped promote the contest. For safety reasons, Lindbergh painted Nikki’s design on the tank, with the original artist adding some finishing touches.

“Her artwork will serve an example of quality public art that has meaning and value for your community,” he said.

“I take art seriously; it’s the biggest thing in my life,” she said. “That, and animals and the environment.” 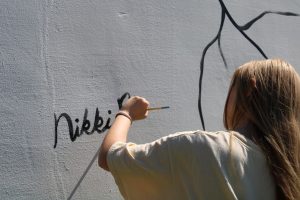