Ask Ariana Trevino what she wants to be when she grows up and the rising Parkway Elementary School fifth-grade student not only knows what career she aspires to purse, but why.

“I want to be an engineer because I like making stuff with my creativity,” she says as she sets down a soldering iron she was using to weld together pieces of a circuit board. 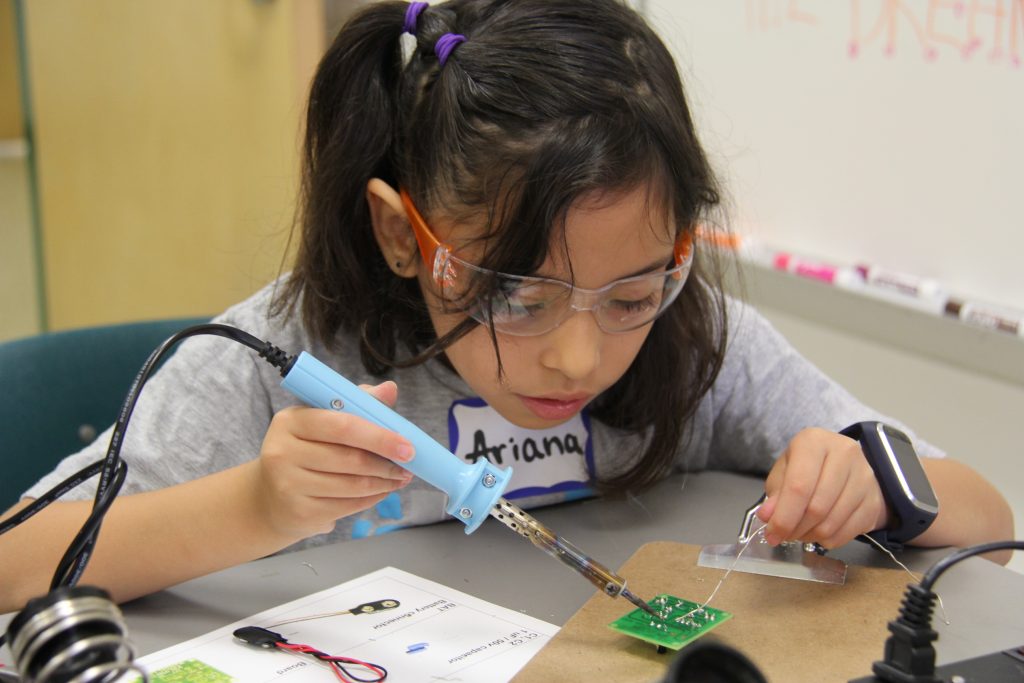 Next door in the classroom designated as “Coding” by a paper sign posted on the entryway, rising Rosemont Elementary School fifth-grade student Sandiah Hobert was busily programming a Dash robot to play a xylophone to the tune “Twinkle, Twinkle, Little Star.” While scrolling through the musical bars on her iPad that control Dash’s movement, she said that she, too, wants to be an engineer. 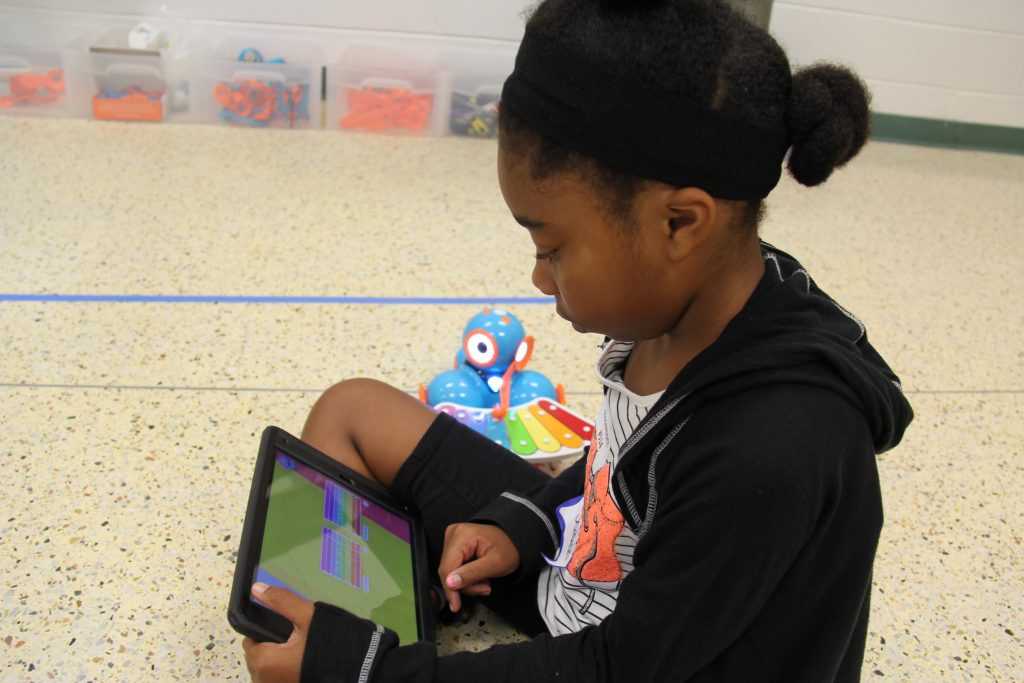 Trevino and Hobert are amongst the hundreds of students attending the school division’s annual summer Title I Science, Technology, Engineering and Math (STEM) camps occurring in July at Lynnhaven Elementary School. Each of the three weekly camps is filled with a different group of 100 rising fourth- and fifth-grade students from Title I schools.

“We want this to be so fun and engaging, but we also want to have learning targets tied to our curriculum so we are reinforcing what they learned in school but in a way that sparks something in them,” said Sheila Cooper, Title I instructional specialist who is one of the educators that started the camps five years ago.

“I’m really impressed with the quality lessons that teachers bring,” Cooper said. “We set up what the classes are going to be and then teachers sit together, look at the curriculum and enhance it with their own experiences.”

One of those experiences, for example, was adding music capabilities to Dash through a xylophone attachment since music teachers are partaking in the camp for the first time this year.

Cooper said that they infuse many other objectives into the engineering, robotics and coding classes. 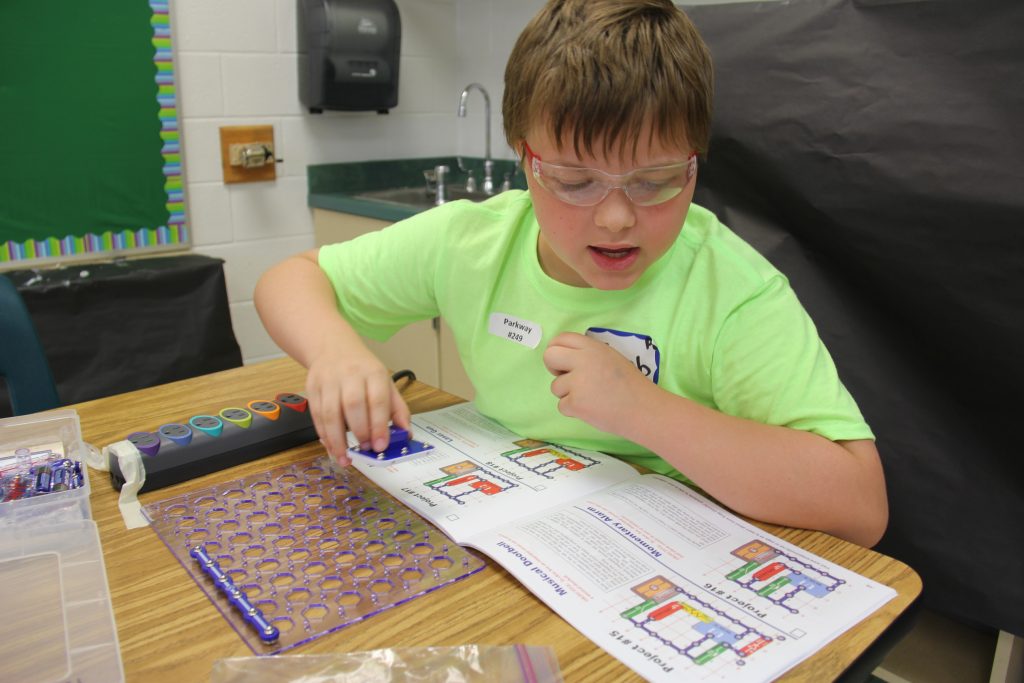 “For instance, yesterday they studied the life cycle of a frog and built a robotic Lego tadpole version,” said Cooper. “Today they will modify the tadpole into a frog robot version.”

Why was engineering so popular that day?

“When students arrive in the morning, they first have breakfast during which time we have a morning meeting based on a topic that relates to the focus of STEM camp for the day,” said Great Neck Middle School Instructional Technology Specialist Shawn Krisch, another one of the educators who was part of the camps’ inception.

“This morning while the students were eating their breakfast, we asked them about their favorite part of yesterday’s engineering activity along with providing an overview of different types of engineering careers, such environmental engineer, structural engineer or aerospace engineer,” Krisch added.

In addition to the exposure to careers, teacher Chad Huff said that nearly everything is a hands-on activity.

“It’s not just direct instruction of teachers telling them something and then they’re expected to retain it,” said Huff, who teaches at Birdneck Elementary School. “They are getting to apply a lot of the knowledge.”

Huff points to the floor in the center of the room where Hobert is working on her Dash robot.

She is in one of four groups surrounded by strips of blue tape that resemble various geometric shapes on the floor. 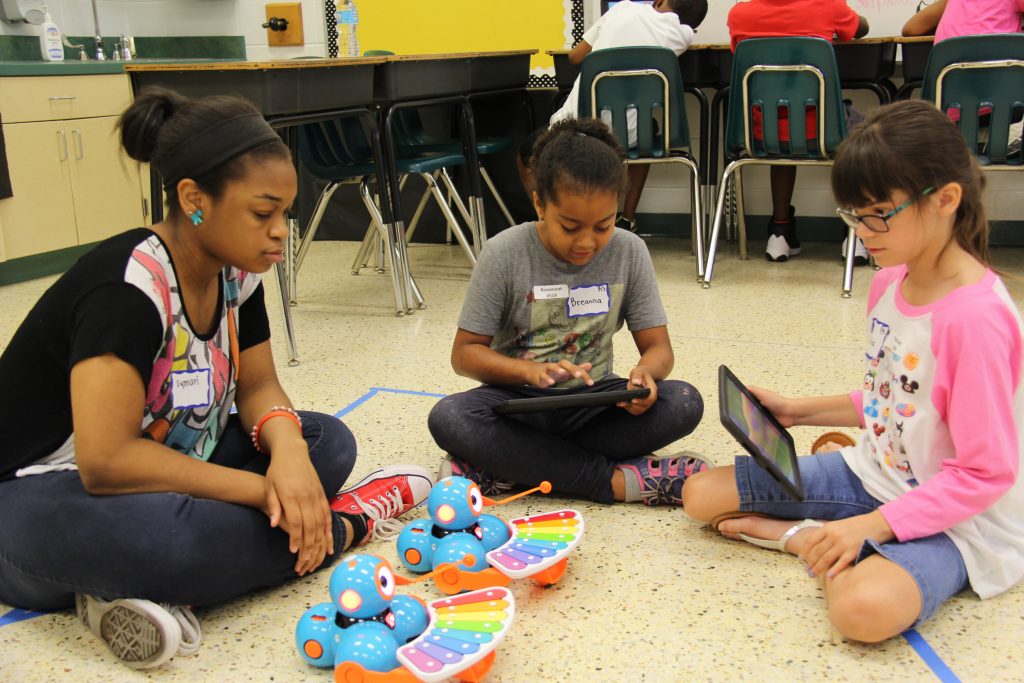 “There’s a lot of measurement as far as having to measure the lines that they are building and time it takes [Dash] to travel along the entire shape,” Huff said. “We are trying to embed a lot of those third-, fourth- and fifth-grade objectives because that’s the age range that we’re working with so we’re making that connection with ‘oh, I did that in class last year but it’s a completely different environment than my classroom setting.’”

In that same classroom where Hobert was programming her Dash robot, six students sitting at one large table were carefully sketching with black markers what, at first glance, appear to be giant doodles. 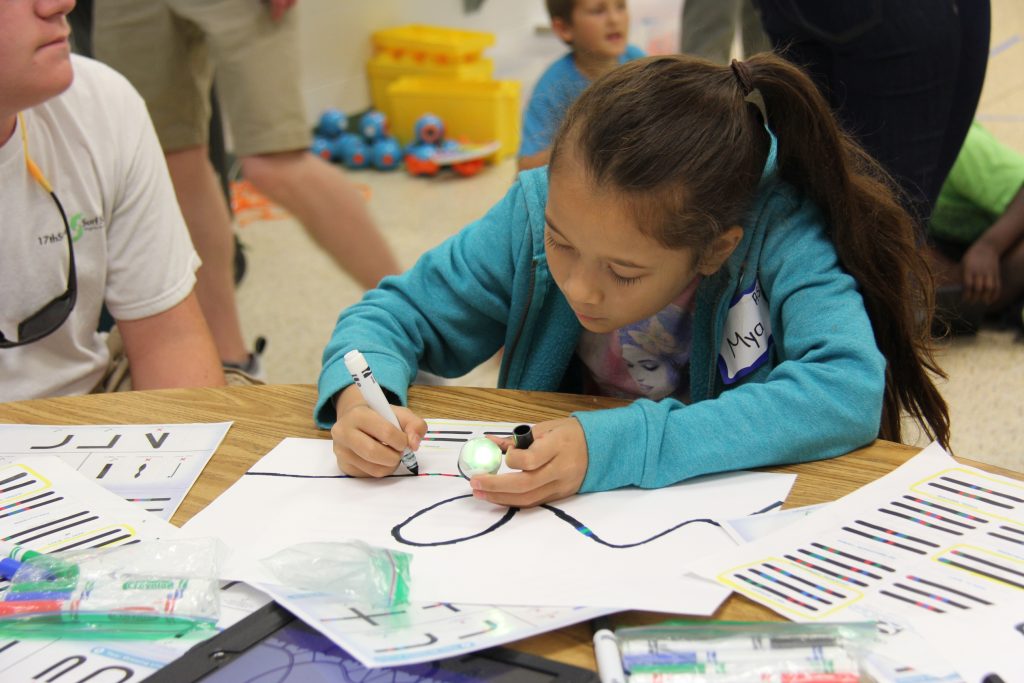 “The Ozobot knows where to turn by traveling along the black marker by itself,” Moore added while he pointed to his programming handout that designated green and red colors for other commands.

“When it hits a certain color it does something else.”

He, too, wants to be an engineer.

The third station in that “coding” room was a row of students working on iPads.

“They are coding using very basic apps but it really introduces them to complex concepts that coders use,” Huff said. “One of the things that they can recognize, because they spend so much time on computers and play video games, is that when a random object starts moving in the background, it just didn’t start moving by itself. Someone had to program that item to continuously move. Experiencing coding makes a really good connection for them.”

Both Huff and Cooper separately mentioned that making connections to what they are learning during the regular school year is one of the objectives of the summer camp.

One of the other connections is how their activities in camp can be used in future careers, something which is shared with parents.

On the final day of the camp, parents are invited to camp for what is called “Challenge Day.” On this day, students pick their favorite station and work on a project which they showcase to their parents in the afternoon. While parents are there, camp organizers and teachers take the opportunity to share what families can do in elementary and middle school to help prepare students for the future.

“Virginia Beach [City Public Schools] offers a lot of opportunities,” Cooper stated. “We have the Advanced Technology Center, the Technical and Career Education Center and many academy programs, but we tell them that if they want your children go to those programs, here is what you have do in elementary and middle schools to make room in their schedules to attend those programs.”

She goes on to say that they let them know what the process is and encourage them to connect with guidance counselors who can help them get there. They also share activities occurring at the elementary school level, such as the STEM Trifecta program.

Before they depart, students and their parents are treated to one grand finale activity, seeing staff from the Virginia Air and Space Center make ice cream using liquid nitrogen.

“We have many partners who make this camp happen—Food Services, Transportation, Department of Technology, Teaching and Learning, Lynnhaven Elementary School and student volunteers from every one of the division’s high schools.”

Cooper says that they will continue to refine the camp every year to make it even better, but the one thing that she hopes is that camp is just the beginning.

“We don’t want it to end at camp,” Cooper said “We want it spark something that helps them get that interest into something at school, especially with our underrepresented students in those careers. We want them to realize that they can do it and get them on that path.”