Students in the school division’s gifted visual arts program at Virginia Beach Middle School (VBMS) are only a few blocks away from what has become known as the city’s ViBe creative district.

The close proximity and shared artistic passion make them natural partners for collaboration, according to representatives at the Virginia Museum of Contemporary Art (MOCA).

“The ViBe district is where they support local artists and they put up artwork. A lot of the restaurants and stores all support local artists,” explained Jessica Provow, gifted visual arts teacher. “MOCA contacted us and asked if we wanted to do one of the murals for the green fence, which is going to be turned into this big park.”

The fence, which runs the length of 18th Street between Cypress and Mediterranean avenues, already has one “test” mural by VBMS students featuring silhouettes of a surfer and skater. Eight more will be added later this month. 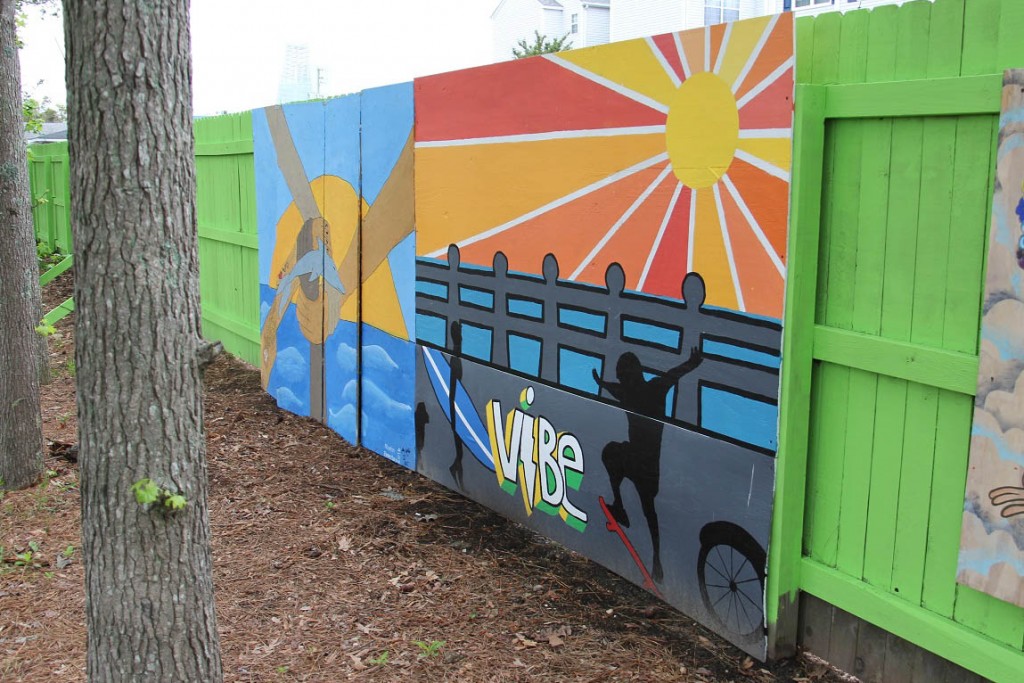 Provow said MOCA funded all the paint and plywood needed to create the life-size works of art. She and her colleagues developed the corresponding lesson for eighth-grade gifted visual arts students.

Jessica McDougall’s group had to incorporate organic and geometric shapes as well as a military theme. In addition to a Navy aircraft carrier and Air Force jet, the mural features a variety of symbols.

McDougall explained, “The mermaid is like the statues in Norfolk. The red cardinal is the state bird. The lighthouse, actually, I was looking for Virginia symbols and I saw a lighthouse on it, so I incorporated that. There are a lot of dolphins in Virginia Beach and we had to include the beach, which is what we are known for.” 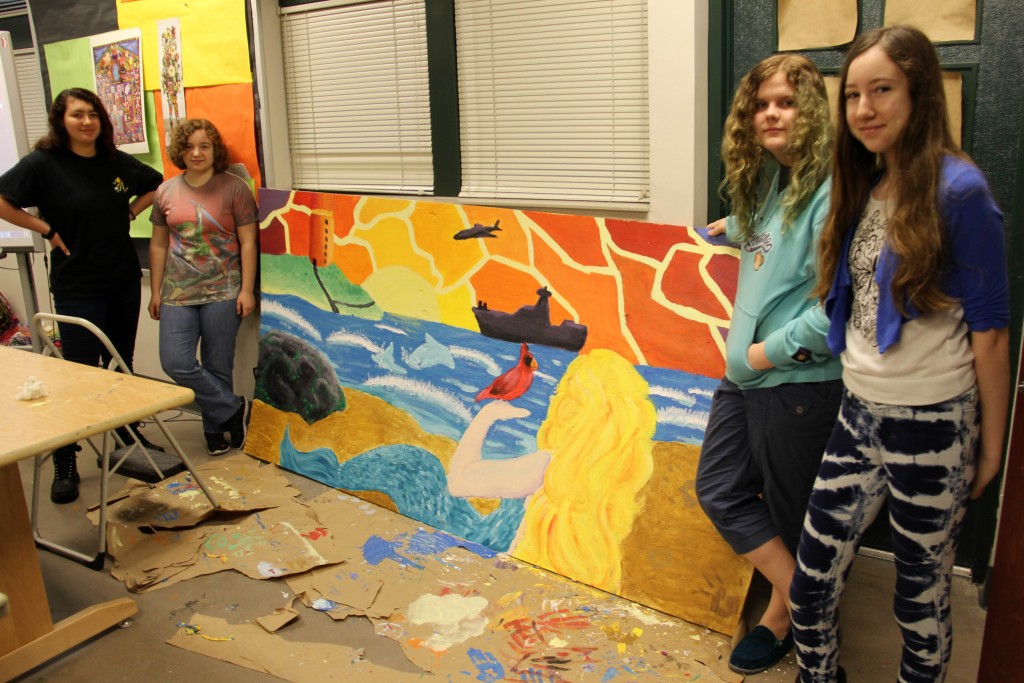 “We signed it weirdly because we all put our handprints instead of our signatures,” added Quinn Weiss.

Weiss may think it’s weird, but others will find it creative, refreshing and different. Just what the ViBe district hopes to showcase.

“I think the best part is that it could all be put together so it looks like something and not like a bunch of random pieces,” observed group member Zoe Phan. “It is kind of random, but I mean it works. It will be pretty cool to see it around and for other people to see it.” 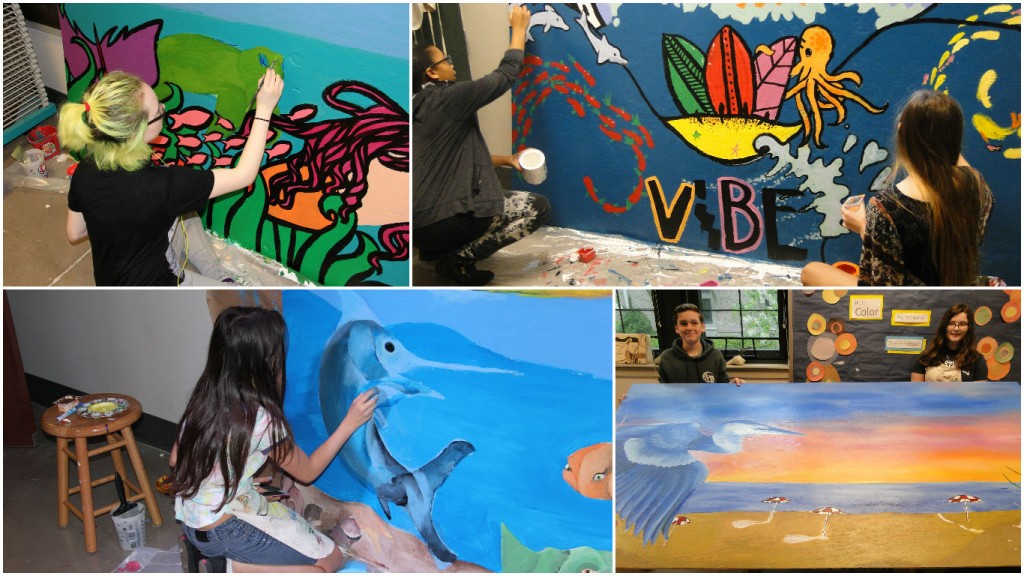 Only one fish is swimming in the artwork by John Freeman, Kelsey Demaro, Jaden Delrosario and Austin Harwood. It is joined inside a fishbowl by a group of people who are all being watched by a half-human, half-fish merperson.

“We had three things we had to use: distortion in some form, warm colors and people,” said Freeman.

“The distortion is like what the fish bowl creates,” added Demaro. “The colors are more vibrant over here. The people are the merperson and the crowd over there.”

People inside the fishbowl? 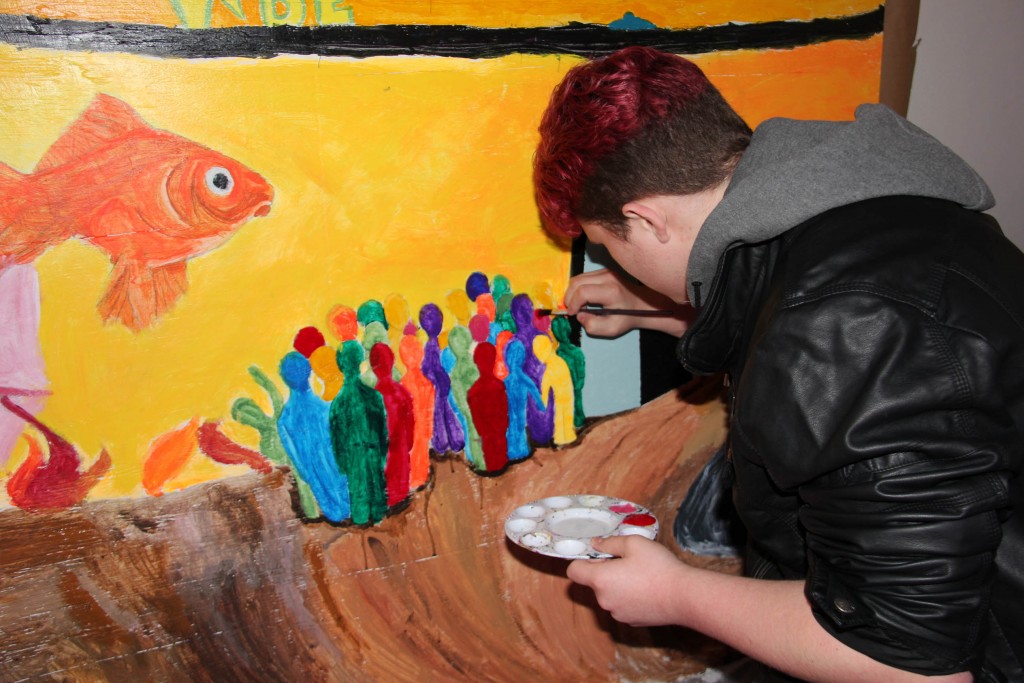 “Our first idea was to make it interactive and have a mermaid with her arm out so people could come up and take a picture. But we realized it’s next to a road so most people wouldn’t stop there,” said Austin Harwood.

They had many other ideas they bounced off each other until, according to Demaro, “one of our ideas was to combine them, and we thought, ‘What’s the most creative way we could combine them?’”

“Jaden suggested jokingly, ‘Let’s have people in a fishbowl and have the merperson looking into it,” continued Demaro with her group members laughing at the memory. “But then we thought that could be a really cool concept. And so, we did it.” 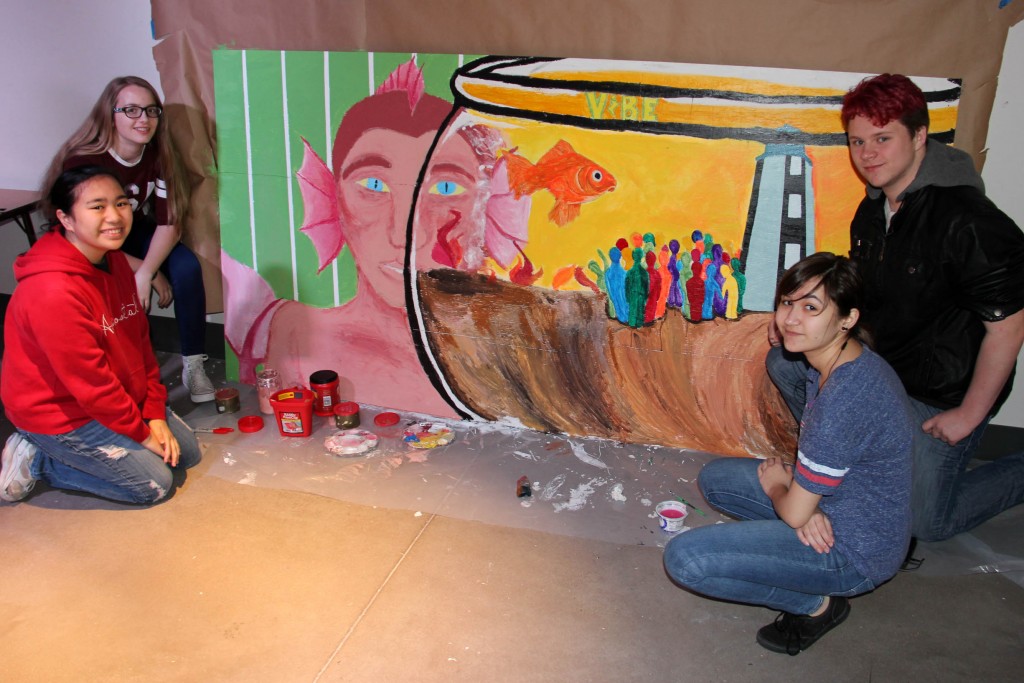 People were also featured in another mural designed to showcase diversity.

“Since this project was all about community, we wanted to show the different types of people in it,” shared Darcy Liebell. “It represents the diversity of all the students and artists in Virginia Beach. We have someone who could be a surfer or a musician or a student. And then we have an artist, an athlete and a dancer. That’s not everyone, but we wanted to show lots of different people.”

They painted a statement on the mural to make sure their intent was clear: “In a community maybe you are a dancer or an athlete or a student. But no matter what you will fit in.” 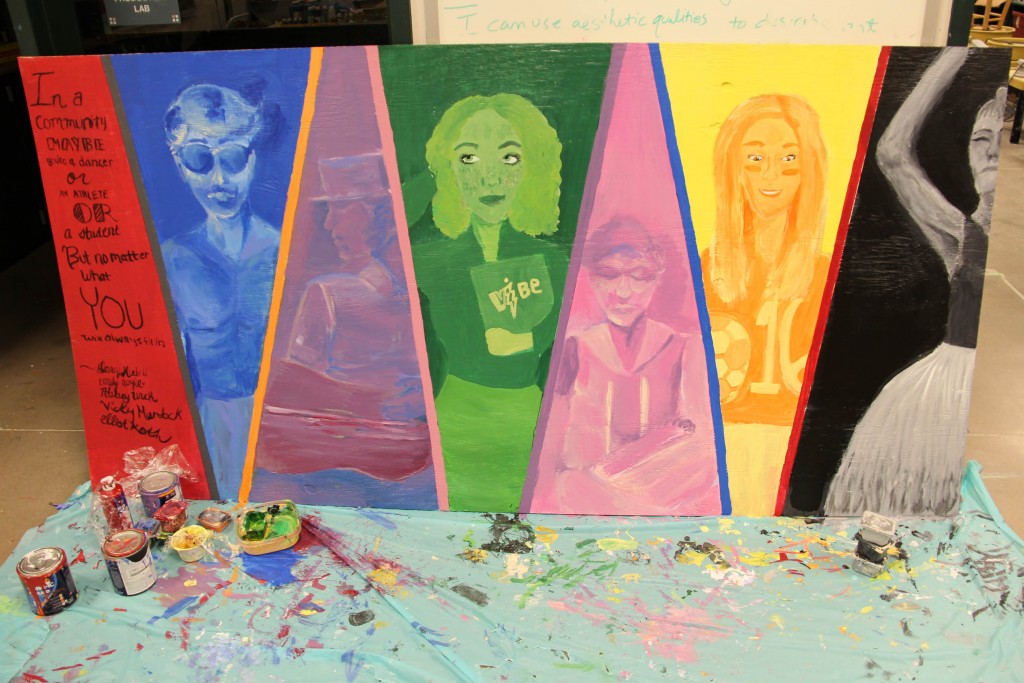 The group considered featuring the beach like the murals of their peers.

“I originally wanted to do an under the sea theme, but Elliott mentioned that she doesn’t really go to the beach that much. So she said, ‘Why not focus on the community,’ and we all thought that was a good idea,” Emily Royal said.

Getting from the good idea to the finished product was another matter.

“We all didn’t agree on if we liked the [design] or not so we all had to work together,” said Abbey Urch.

“We probably went over the faces like 10 times each. They weren’t proportional or weren’t right, so we learned to work together to make it look right,” Royal added.

Communication. Collaboration. Decision-making. Students practiced their interpersonal skills as much as their artistic skills.

Urch thinks their completed mural will be well-received.

“I really think that it will pop and be a piece that attracts the viewer’s eye,” Urch said. “Each one is different from the other which makes it really unique. Everybody in the community can each relate to one of them.”

The community can see the students’ murals, which are on permanent display, on the ViBe creative district fence on 18th Street.

“That’s a new thing for all of us,” remarked Demaro. “It’s crazy thinking how long they will be up there and that a piece of all of us will be in the community for everyone to see.”