Students standing on the front lawn of Lynnhaven Elementary School were asked to count down from five to initiate the launch.

“Five! Four! Three! Two! One!” they shouted and shielded their eyes from the sun as they watched the plastic soda bottle, propelled by pressurized air, lift into the sky. 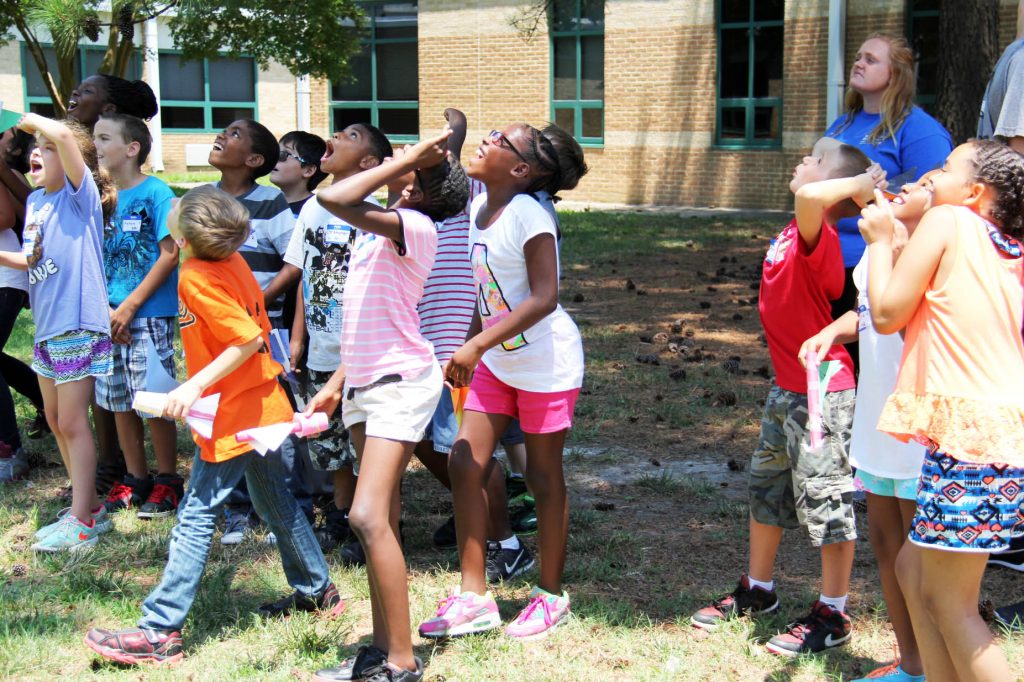 “And that’s the power of science,” said one student matter-of-factly after the water rocket landed on the ground.

It was a teaser of what was to come for fourth- and fifth-graders attending the Title I STEM summer camps hosted by the school division throughout July. Students from 12 VBCPS elementary schools participated in four-day camps free of charge and were given opportunities to engage in activities involving robotics, electronics, coding/computer programming and engineering.

The Virginia Air and Space Center (VASC) in Hampton partnered with the division’s Title I program to support the camp with additional grant funding, field trip opportunities and staff. Teachers from Title I schools served as STEM camp instructors. 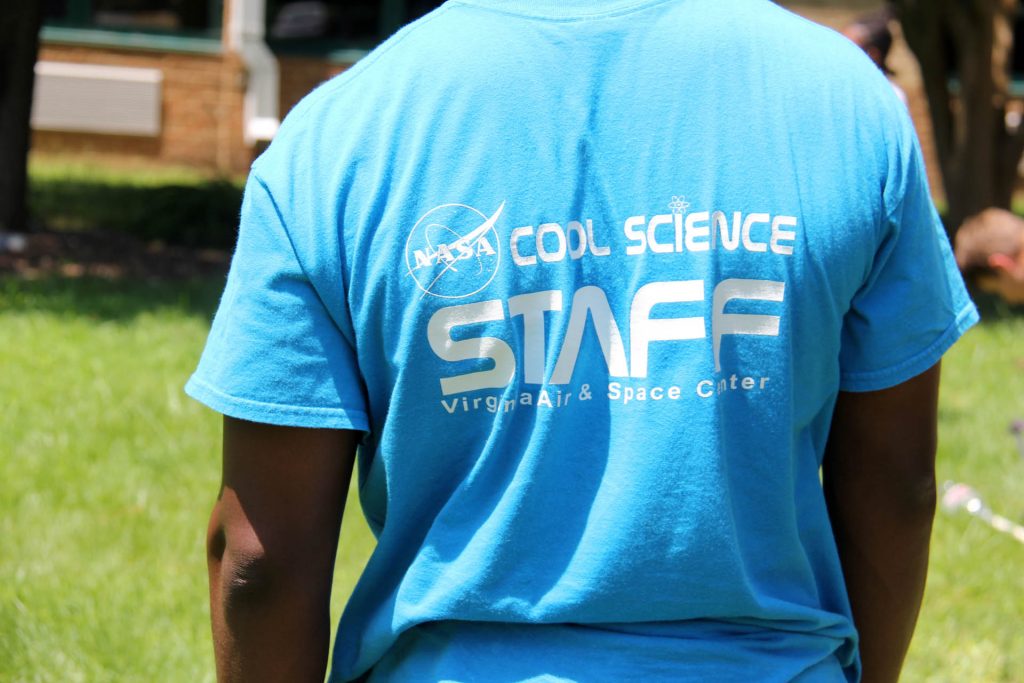 The engineering design process was the focus of his instruction this year, working with students to plan, create, test and improve paper stomp rockets students launched by jumping onto empty two-liter bottles connected to PVC pipe. 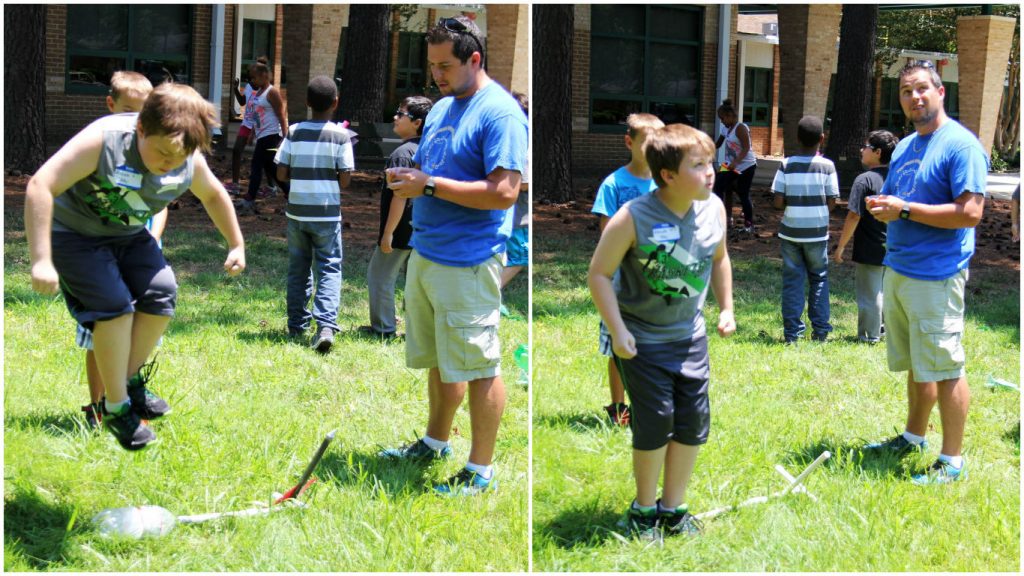 “You can take something fun, like paper rockets, and they don’t even realize they’re actually doing [math],” White said. “They don’t know they’re doing trajectory by the angles they’re shooting their rockets. They don’t normally think about those big concepts, and then you break it down after and show it to them and they say, ‘I didn’t know that I was just doing that.’”

“They have fun when they’re doing it, which is the best part of learning,” added White.

Parkway Elementary School student Kiera was having fun redesigning her paper rocket from the day before which flew in the air for 2.68 seconds.

“I had lots of tape on my first version. It kind of looked heavy on the plane,” she said. “So I decided to use only a few pieces of tape. I put three around it – one on each end and one in the middle.” 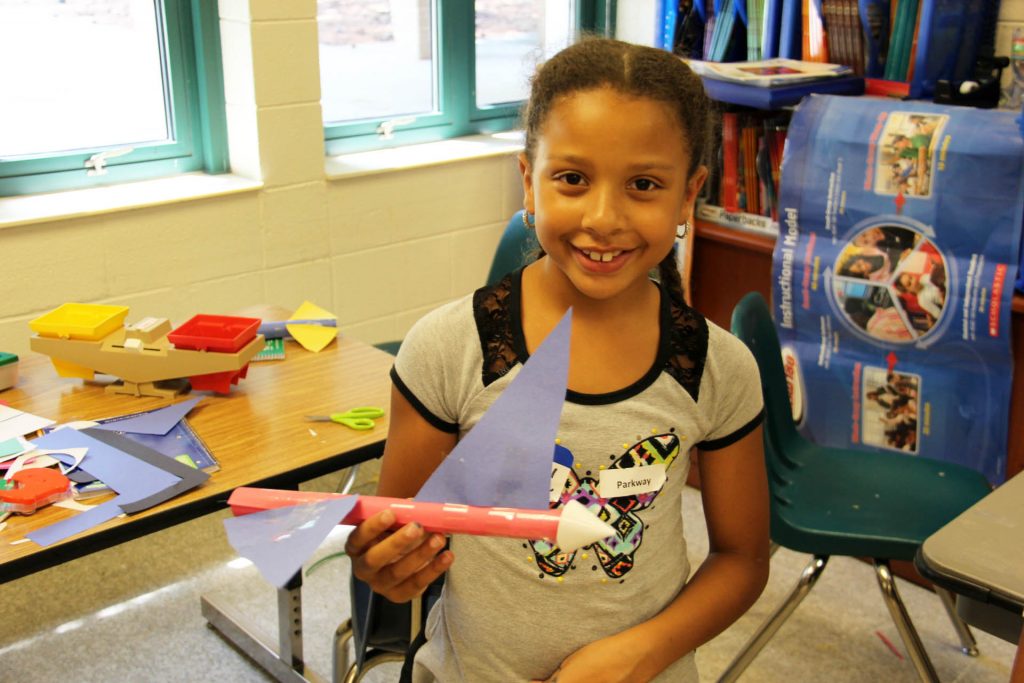 She continued to describe in detail how she adjusted the rocket’s nose and wings, using tape more sparingly for her second trial.

The sounds of students having fun learning also could be heard inside the school where they were programming Dash robots and LEGO robots as well as using Ozobots and Makey Makey invention kits.

“You know what? I think I got an idea for us getting around the whole thing,” said Carlos to his partner Mason about the Dash robot challenge for the day. 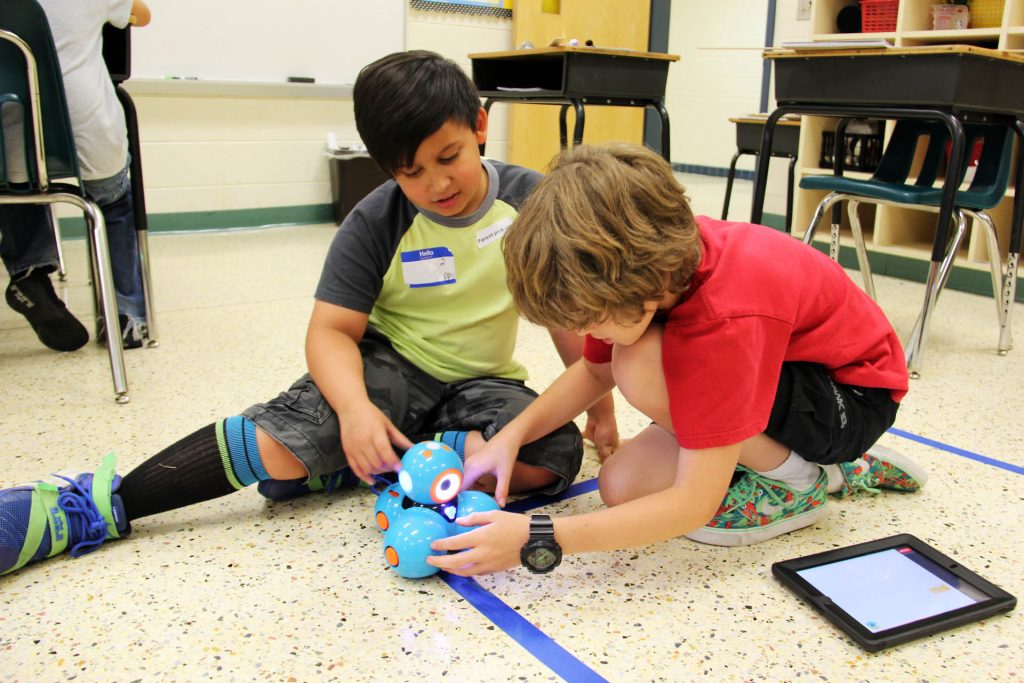 The two watched as Dash successfully made its way around the square of blue tape on the classroom floor.

The pair began to discuss next steps after showing a camp visitor some of the Dash’s special functions.

“Ready?” asked Mason as he programmed the robot. “It’s going to rev up its engine.”

“Do the dancing mode!” Carlos cheered.

They easily maneuvered Dash, and it was only their second session programming the robot.

“The kids – you show it to them and they just take off,” said Miesse from her small group table with Ozobots.

“They’re teaching us. They all want it,” she continued. “The kids just pick it up and run with it. That’s why I don’t fret if I ever don’t get something because I know they are going to get it and show me.” 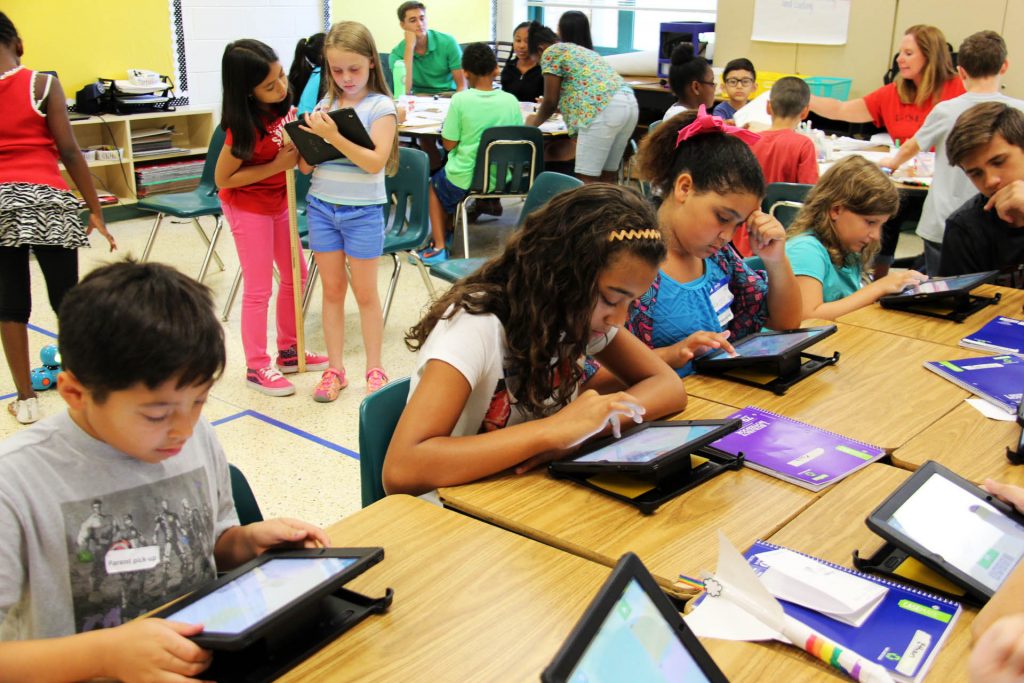 Miesse, who was having as much fun learning as the students, said she was texting her principal ideas for her school’s makerspace based on her work at the STEM camp.

“It’s a great introduction for the students, and you hope they will continue on and get into coding after high school,” Miesse said.

Informing students and their parents about pathways to STEM careers is one focus of the camp according to Title I instructional specialist S. Cooper. Parents are invited to the final day of each camp to watch students showcase their projects and hear from camp staff about school division programs.

“We let parents know that if they want their kids to get on that path for STEM careers, they have to start thinking about it in elementary school and the kids have to start getting excited about it now,” Cooper said. “We tell parents exactly what they can start thinking about to get their children into academies, the ATC and the Technical and Career Education Center.”

“Especially in our Title I schools, our parents want the best for their children, but they don’t always know what those opportunities are in this division,” Cooper said, “so part of our job is to make them aware of that.”

Cooper also notes that changing mindsets for some students is another valuable aspect of the STEM camp.

“A lot of times [our girls] don’t see this as a career path for themselves,” she said. “We want them to know that they can do this. This is for them, too. They may not think about coding being a ‘girl thing’ but they’re getting just as engaged and excited about it, and if they know they can do it then they can continue exploring those fields.”

Providing STEM role models for all students at the camp is one reason Cooper also has high school and college student volunteers helping with all the activities.

William Beale, who graduated from ODU in May, said his high school basketball teammates dreamed of careers in basketball while he told people he always wanted be a scientist. Childhood visits to NASA and Langley Air Force Base air shows developed his love of airplanes and rockets, and now the aerospace engineer works with VASC on its outreach programs.

Beale agreed with other camp staff members that early exposure to STEM-based explorations is valuable. 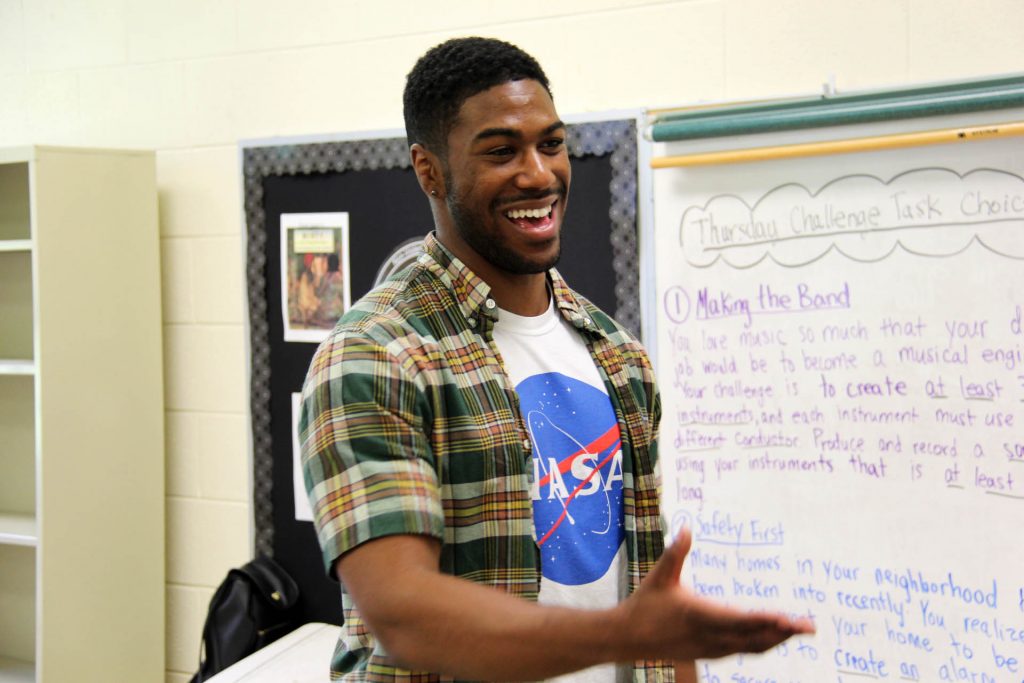 Beale acknowledged that today’s students are well on their way.

“They’re very well versed with the technology already,” he said. “We do a little bit of computer coding and before we even finish the instructions, the kids are already in there doing what they have to do.”

“I made it work!” shouted a student in the room with Beale, celebrating that he was able to play the video game Pac-Man with his hand drawn controller. 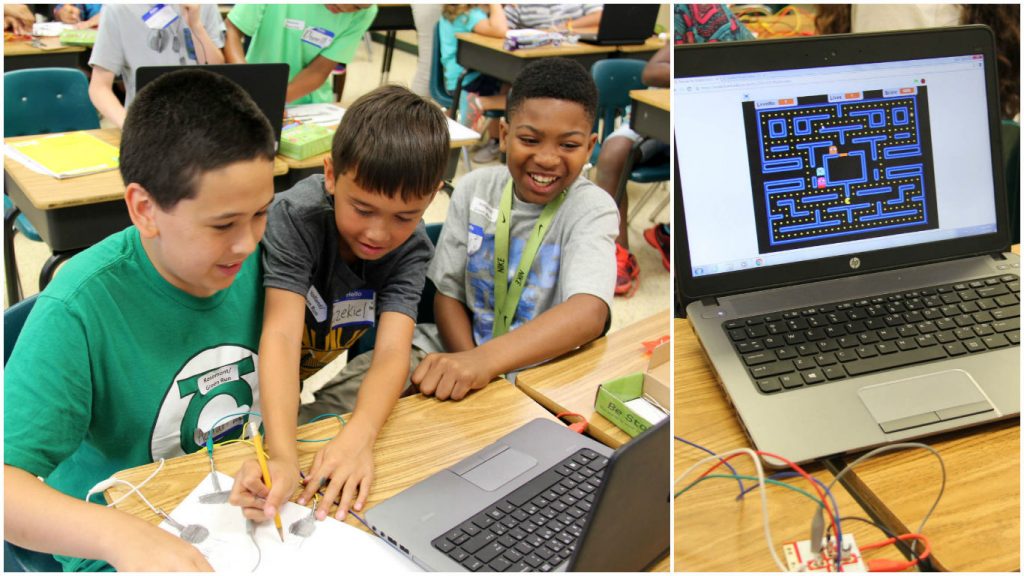 The same smiles and enthusiasm were seen around the classroom and across the hall where students experimented with LEGO robotics kits.

“Kids having access to this kind of equipment and activities is what we try to do in Title I,” said Cooper. “We try to level that playing field and give them exposure to what’s so important for their careers. If they get excited now about this and parents get on board with how to get them there, this can change their lives.”