Sitting in the Johnson Space Center in Houston, Texas surrounded by a large wall filled with photos of astronauts and their missions, Salem Middle School student Elijah Fischer knew that he was in special place. 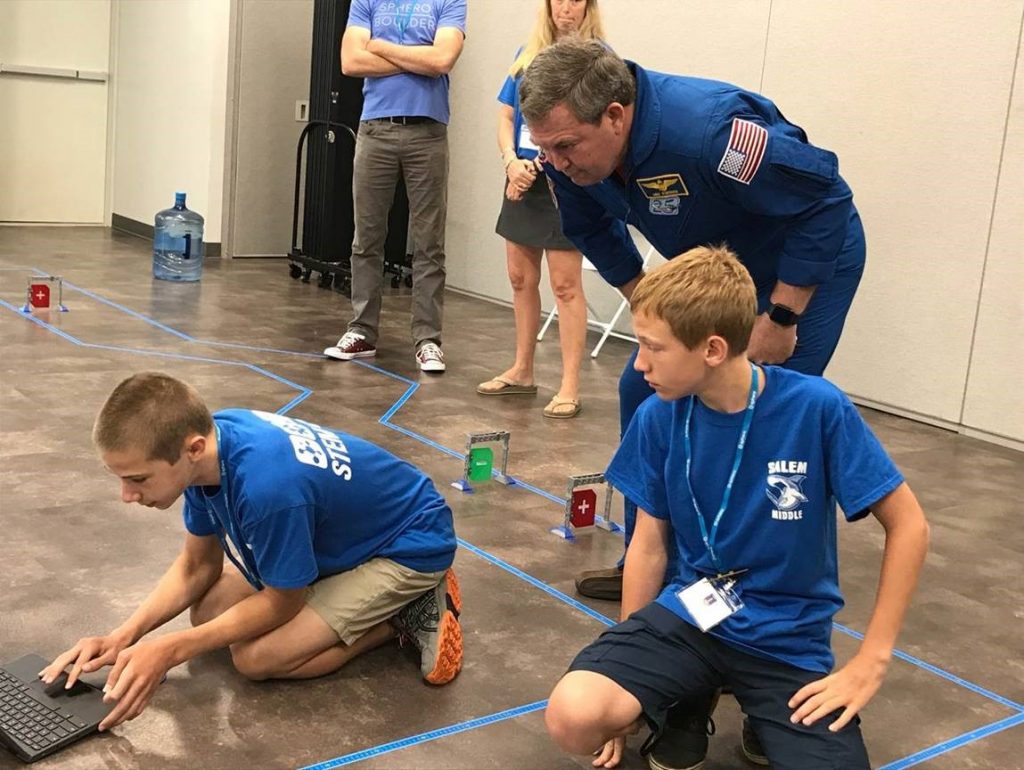 “It was pretty exciting to be in Houston actually meeting Sphero members and astronauts—it was all pretty cool,” Fischer recalls.

To get to the finals, they had to outperform 320 other teams in a series of 12 coding challenges, completed at their respective schools.

Since the competition was in honor of the 50th anniversary of the first moon landing, the students had to build a mock lunar module with a ramp for their Sphero to roll out of before progressing through coordinates on a grid that resembled the surface of the moon. Their event packet contained two Sphero robots, one named “Buzz” that asked space-related questions about their mission, and the other named “Neil” that students had to program to navigate along the grid based on their answers.

“Just the opportunity for our students to go on a nationwide competition and know that if they really put their minds to something, they can do it,” said Warren, technology education teacher at the school who served as their adviser and met with the team each morning before school.

“They would discuss it and talk about it and they would change their mind and do something else. They were challenged, but they had a purpose to fulfill,” she explained.

Teams were given 47 days to complete their mission and upload their projects. Then, a few days after the school year ended, Warren was notified that they were one of the top three scoring teams in the nation and, as such, had earned the all-expense paid trip to the finals in Houston.

“We got to meet astronauts and one of them was a judge for one of our challenges,” she added.

But before the final winner was selected, teams were asked to complete one last challenge: program the newest model of the Sphero robot, the RVR.

“They said that it all came down to the final challenge,” Fischer recalled. “We drove the RVRs around to try to herd a whole bunch of Sphero Bolts into little pens and each bolt was worth a point. We got second. It was really close.”

But the Salem team impressed judges so much that it earned them the competition’s Precision Coding Award.

“They said we were the most competitive team of the three and that the coding our students used was more in-depth,” Warren stated, further adding that rather than programming robots with individual commands, Salem’s team coded their robots to perform specific tasks based on previous actions. Salem students are familiar with coding, which they learn in their computer solutions and technology education classes.

What advice would Fischer offer to students learning coding?

“Have patience. We had to fix things at least three times every day,” he said. “So, have patience because things take a while.”