When second-grader Corey B. was feeling frustrated one day at North Landing Elementary, the school counselor asked him what might help.

Corey said, “I just need to talk with Kevin.”

Kevin is the school’s therapy dog, and Corey felt good enough to return to his studies after a nice outdoor stroll with his furry friend.

“It made me feel very happy,” Corey said.

Kevin has been a cuddly companion for students, faculty and staff at North Landing this year, thanks to Annie Baugher. When she was a teacher in Illinois, Baugher saw how therapy dogs soothed the sorrows of tornado victims, so when her standard poodle Kevin grew up into an easy-going, lovable 5-year-old, she thought he’d be an excellent partner in her first year as a counselor at North Landing.

Principal Jill Barger was thrilled when Baugher asked about training Kevin to be a therapy dog.

“They came to us as our dynamic duo,” recalled Barger, adding that now both students and faculty regularly ask to spend a little time connecting with Kevin, which helps them recharge before returning to work.

To build the required skills for therapy dog certification, Baugher and Kevin went to training once or twice a week for about 10 weeks at Einstein K-9 in Virginia Beach. They worked on basic commands and doggy self-control. Once the trainer felt the pair was ready, Baugher and Kevin began testing, which involved observing the duo in public settings such as Lowe’s, Home Depot and pet stores. 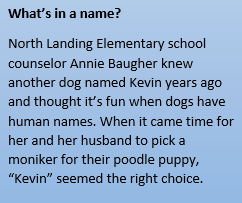 During the tests, the observer watched for Kevin’s ability to follow commands and Baugher’s ability to direct and redirect him. Kevin passed with flying colors and earned certification dog through the Alliance of Therapy Dogs. The school received a waiver to see what help Kevin could provide this school year. Parents were given the choice to decline having their child interact with Kevin, but none of them opted out.

When Kevin walks the hallways, students give him a quick pat or hug, saying things like “You’re my sweet puppy,” and “Hello, my friend.” Kevin participated in spirit week and dressed up as an M&M for Halloween. 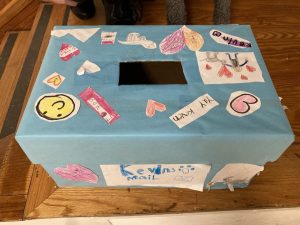 He has his own mailbox in the school cafeteria, where students drop off notes. One recent letter said, “Kevin, you listen so well. … You made my life change. I love you so much. See you at school!”

“Being new here, Kevin has really helped me get to know students on a special level,” said Baugher.

Kevin greets students when they arrive for breakfast and sometimes returns to the cafeteria during lunchtime. He helps Baugher talk to students about how to manage anxiety and express their feelings.

Several students are dealing with the loss of a parent. And Kevin has been there to help them through it.

“Kevin has a magic power,” said first-grader Dot D., whose father recently passed away. “I pet him and all the sadness goes away – and all the happiness comes in.”

Kevin’s training, certification and therapy couldn’t have come at a better time, as the pandemic affects schools and nearly everyone’s way of life.

“As a society we’re becoming much more emotionally aware,” Baugher observed. “I hope other schools look into bringing in therapy dogs. It’s had an amazing impact.”

Dr. Alveta Green, executive director of Student Support Services, commends Baugher and the staff of North Landing for providing a special resource during a difficult time.

“With all the mental health needs we have in this day and age, anything that can provide comfort is a good thing,” she said.

“Kevin helps me feel better whenever I feel sad,” Jason said. “When I feel super-down, I can pet Kevin and it makes me feel good.”

Millie Hernandez has a slogan that inspires her work at Landstown High School: “What makes them happy, makes me happy.” “The parents want a clean school, so I keep it […]

There’s nothing like an unexpected pet appearance to liven up Zoom meetings. They’ve shown up in many virtual classrooms, so much so that science teachers at Lynnhaven Middle School came […]