The jazz band’s melodies welcomed guests inside the gates, where the freshly-cut ribbon was still flying in the wind. Students in the culinary arts programs walked their trays of tasty treats throughout the groups gathered together taking in the view of the new, outdoor addition to Cox High School, The Falcon Wing. 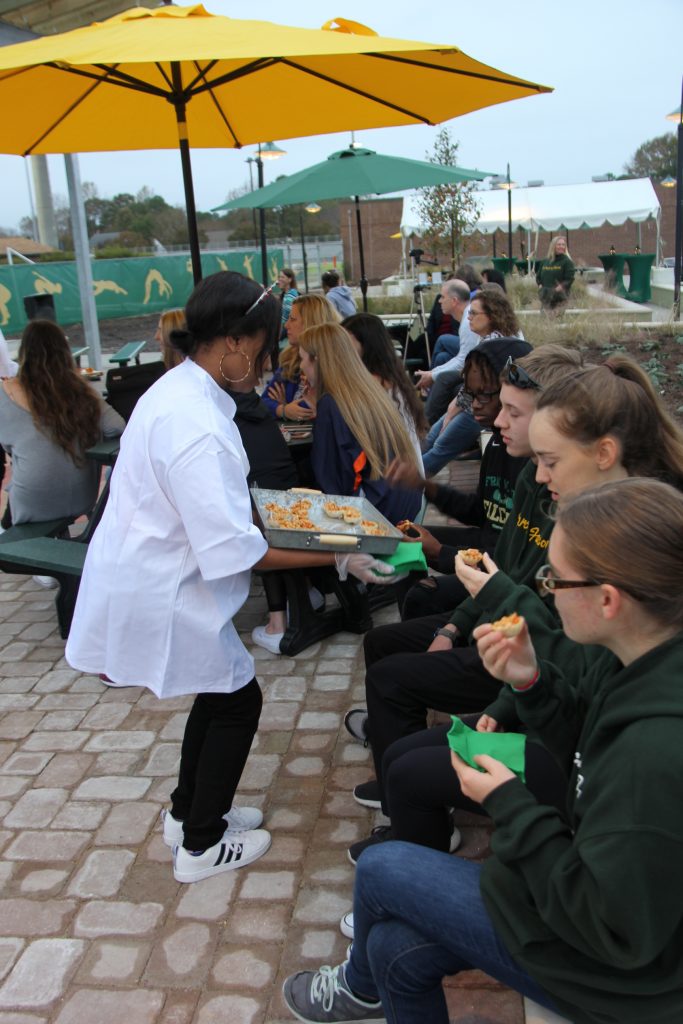 Made possible through the partnership and sponsorship of more than 20 businesses and organizations, The Wing sits right outside of the football stadium and features an outdoor amphitheater, raised garden beds and an array of green and gold tables, benches and umbrellas.

“Three outdoor classrooms – three sections, students and teachers are going to be able to use it all throughout the day,” Cox Principal Dr. Michael Kelly told attendees at Friday’s ribbon-cutting event. “This is going to be an area everyone can use and enjoy for years to come and we’re excited about it.”

The idea to renovate the space came when Kelly, himself, was a Cox parent. His two daughters graduated from Cox in 2012 and 2016. While attending school events and athletic competitions during that time, he noted the dark walkway that led from the parking lot through a number of outdoor portables. 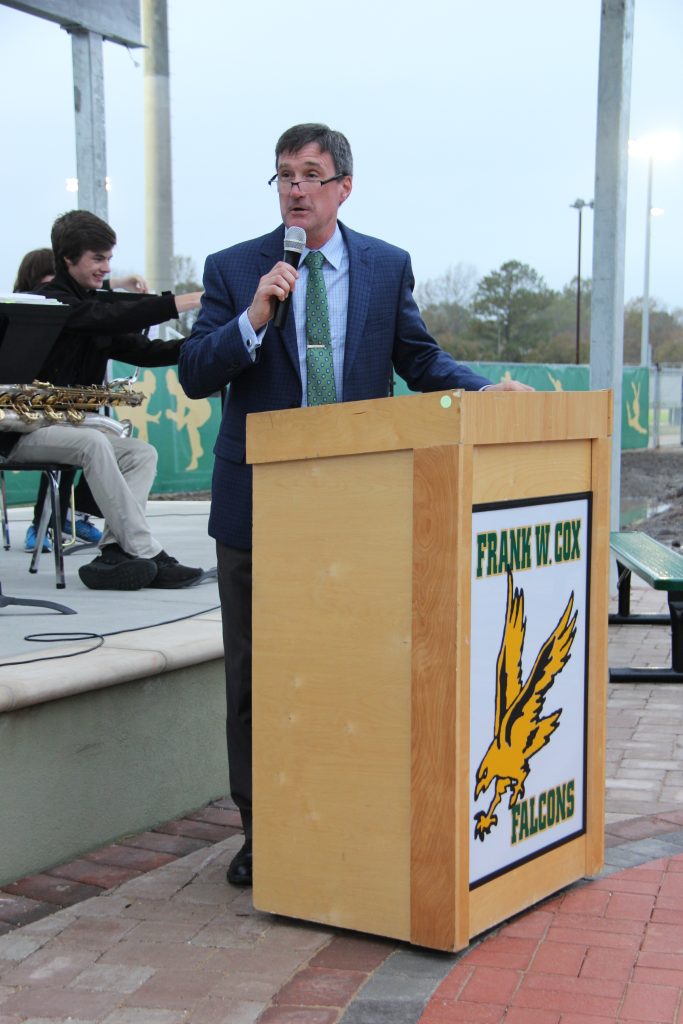 “It’s not a very good first impression for anybody who comes to this school and a lot of people only see the school when they come to an athletic event,” he said. “If you’re coming to a football game, over half the crowd comes through this way.”

In 2017, Kelly was now the principal of the school and the last portable was removed from Cox’s campus, which led to the opportunity to reimagine the use of the space.

Architect Clay Dills joined the project after completing some work at the school’s baseball and softball fields. He met with Kelly and brought back some initial plans on how to incorporate teaching and learning opportunities into the outdoor space as well as to create a place where the Cox community could come and celebrate at various games or school events. 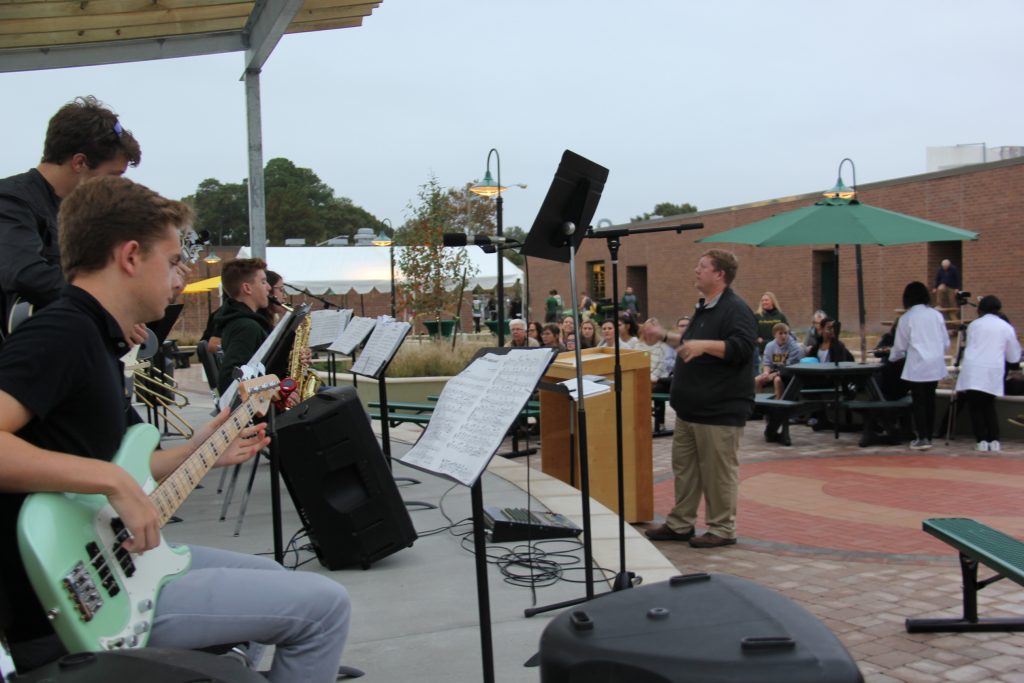 “The view you see here today is almost exactly what he drew up that first day,” Kelly said.

Over the course of the next year, the school helped to fundraise, which led to 22 sponsors coming on board in support of the project. Cox even held a groundbreaking event back in August as construction shifted into high gear.

While administration oversaw the outdoor work, the new space called for a new identity, a new brand. So the school’s marketing students used this as an object lesson in class, coming up with roughly 40 proposals on what to name the space.

The Wing kept flying to the top. 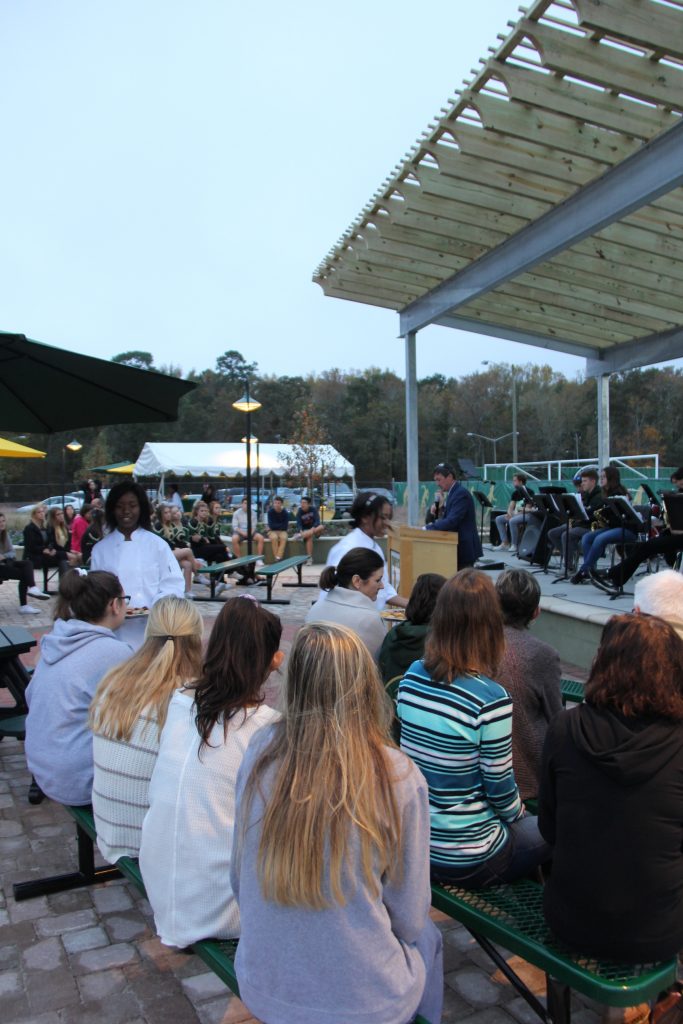 “We’re Falcons and we have a wing,” Kelly said. “And, ironically, if you face north, we’re technically the West Wing.”

Friday night, sponsors, staff and students helped to officially open The Wing, with guests marveling at the detailed finishes and hearing plans for how teachers are already imagining opportunities for the space.

“It’s an amazing day,” Kelly said. “It’s been a true team effort getting this done – with our community, with our students helping, with our teachers helping and with so many others bringing it together.”