The debate team coach had just had a baby, and Brandon Middle needed someone to help.

Jerry Lombardi, a sixth-grade science teacher, was asked to fill in.

“I said, ‘Sure,’” Lombardi said with a laugh. “I had debated once in high school one year…I said, ‘So, I’m going to be learning with the kids.’”

Then, there was the cheerleading team.

Their coach had to unexpectedly step down, and there was no one to lead the girls.

Enter Lombardi, who, again, was asked to step in.

“’Sure, I’ll do it. What do I know?,’” Lombardi laughed even louder. “I became really good at picking out matching stuff and making sure routines were in sync.” 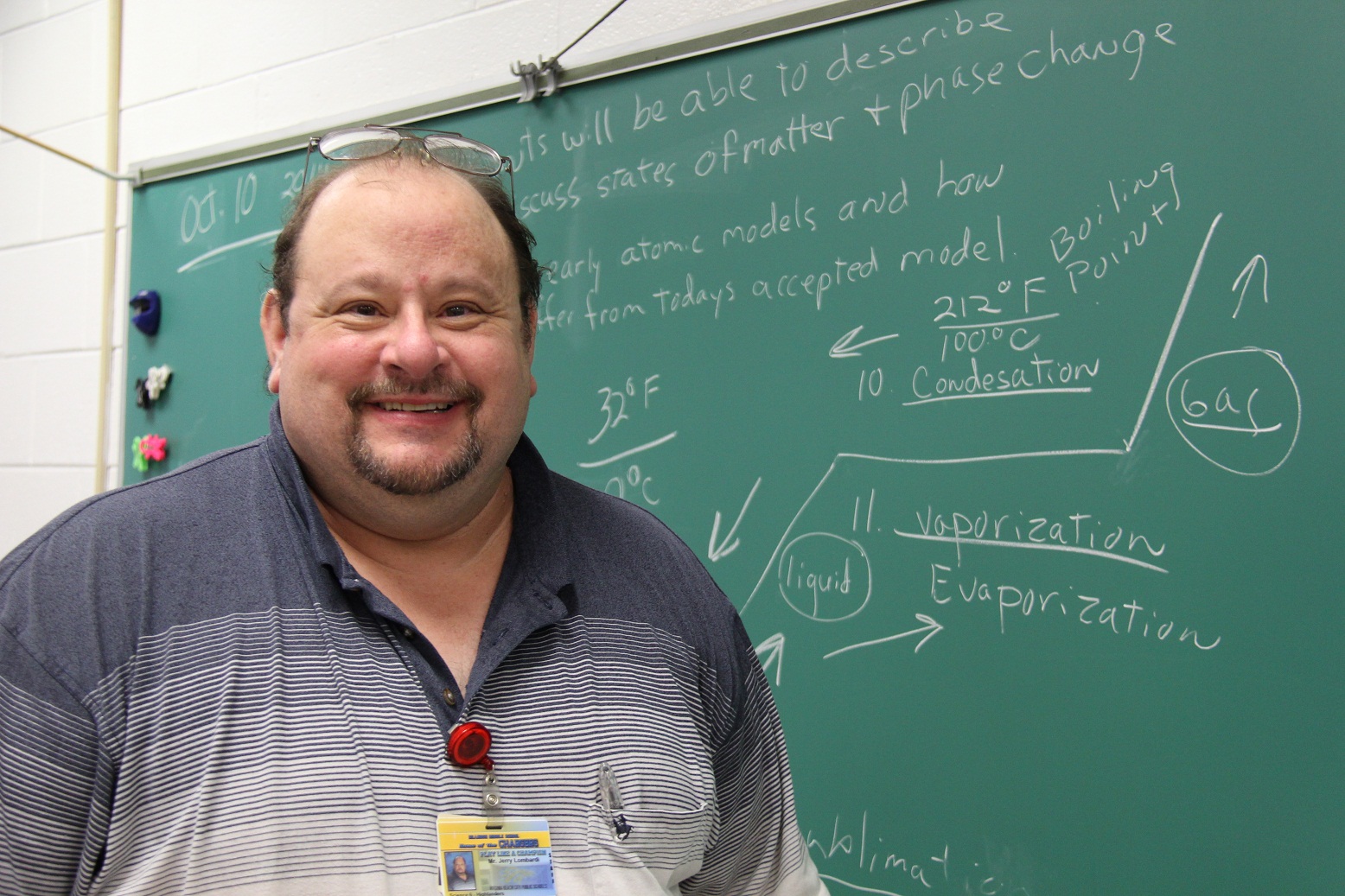 Seemingly, whatever is asked of him, Lombardi’s answers start with “Sure.”

“I’ll try anything once,” Lombardi joked.

He is out every day at bus duty, helping students get to their bus on time. He has coached football. He has coached softball. He keeps score and time at wrestling matches as well as basketball games.

“They just needed someone and I said ‘Ok,’” he said humbly.

And, on this night, he is patiently waiting after school so he and another fellow teacher can attend a local football game. One of his students will be cheering on the sidelines, and they want her to know she is supported.

“I try and build that relationship with (my students),” Lombardi said. “I’d encourage everyone to get involved because it completes the picture. The kids really are different in the activities. It’s a different relationship.”

For Lombardi, a 24-year veteran of the Navy, who came to work at Brandon in 2001, that relationship is crucial both inside and outside the classroom. He wants the best from his students, and he wants them to expect the same.

“My number one rule is when you come through my door, you give me 100 percent,” he said. “You give me your best and you should expect nothing less from me…I’ve got their back. If they’re willing to work with me, we’ll make it work.”

It’s a bond evident to all of those at Brandon.

“I enjoy seeing Mr. Lombardi interact with students. They all know that he cares about them and they have a great deal of respect for him,” said Christy McQueeney, principal of Brandon Middle School. “Mr. Lombardi does whatever it takes to support the students… (they) see that every day as he talks to them at the buses, in the hall and during classes. They know if they need anything or any help, Mr. Lombardi will be there for them.”

And, that’s just how Lombardi wants it – helping his students find ways to get engaged and stay plugged into school.

The debate team Lombardi took over? It came to him with six students on the team. Last year, there were 45.

Lombardi said it is part of a growing trend with students excited about debate, forensics and academic challenge, not just your competitive sports.

“They’re getting excited about the academic extracurriculars,” Lombardi said. “These kids are really a great bunch of kids. I really can’t speak highly enough of (them).”

And, that’s why you will continue to see Lombardi at the bus loop, on the football field, in the gymnasium or anywhere else there is a need.

“We’re doing this for a reason. Some of these kids, they have grown-up problems, but they don’t have grown-up coping skills. They’re trying just to figure out where they’re at,” he said. “It reenergizes me because the kids want to do this stuff and all they want is someone to point them in the right direction.”

What is your favorite book? The one I’m reading is always my favorite. Right now, I’m reading, “The Teacher Wars,” a history of American public education

What was the last movie you saw? Iron Man 3

What is your favorite subject? Science and history

Who is your role model? Ms. Davis. She was my ninth-grade science teacher. She never gave up on me.