The moon helps Madeline, an Arrowhead Elementary fourth-grader, keep her dad close at heart when he is away from home. It inspired her illustration entitled “Deployment Moon.” 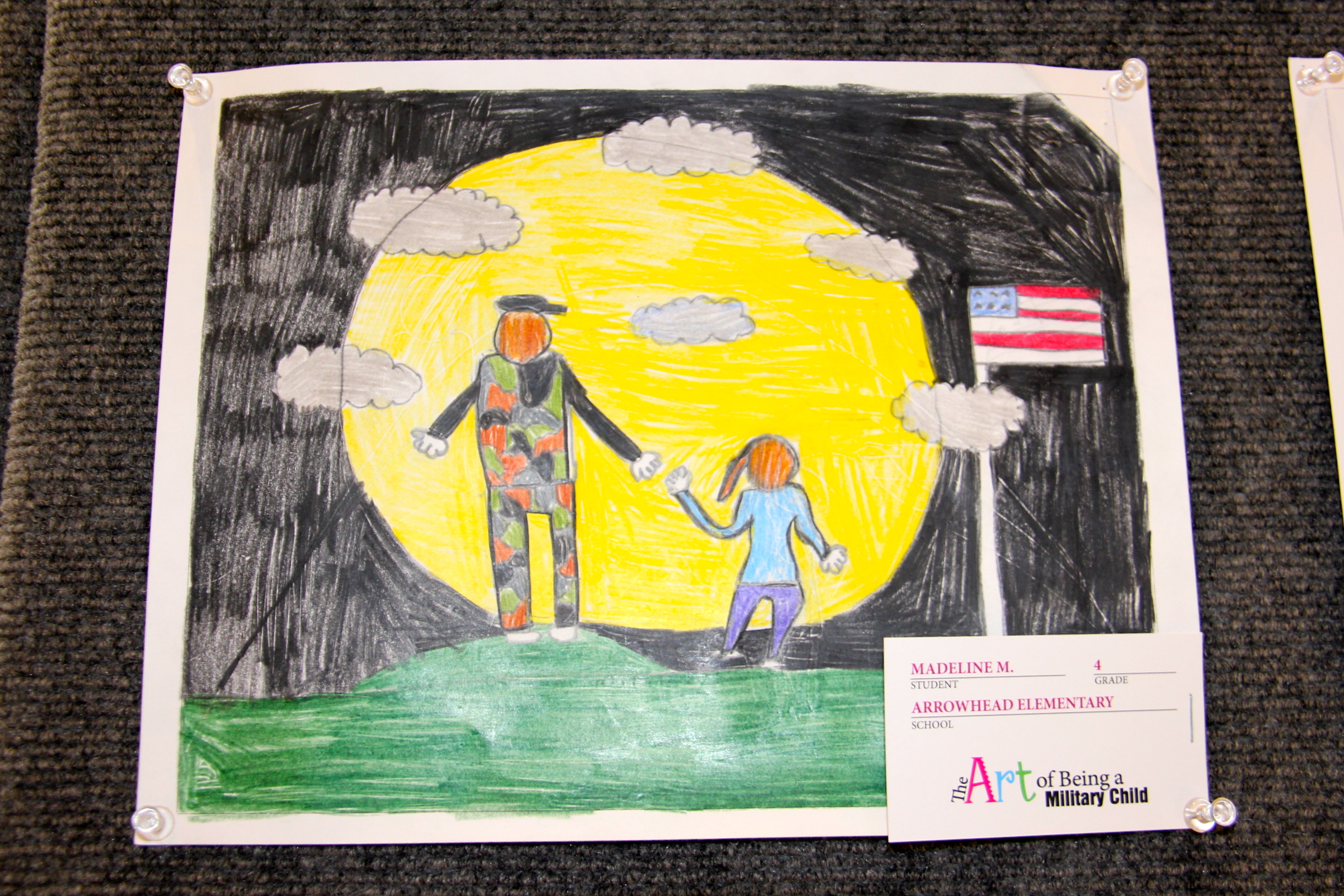 The joy of a military homecoming is the subject of Madison’s illustration.

“I created this piece because when my dad came [home] from Afghanistan that was the greatest day of my life!” wrote the New Castle Elementary third-grader. “At first I didn’t recognize him. I gave him a big hug. I didn’t know he was coming. It was the best surprise ever!” 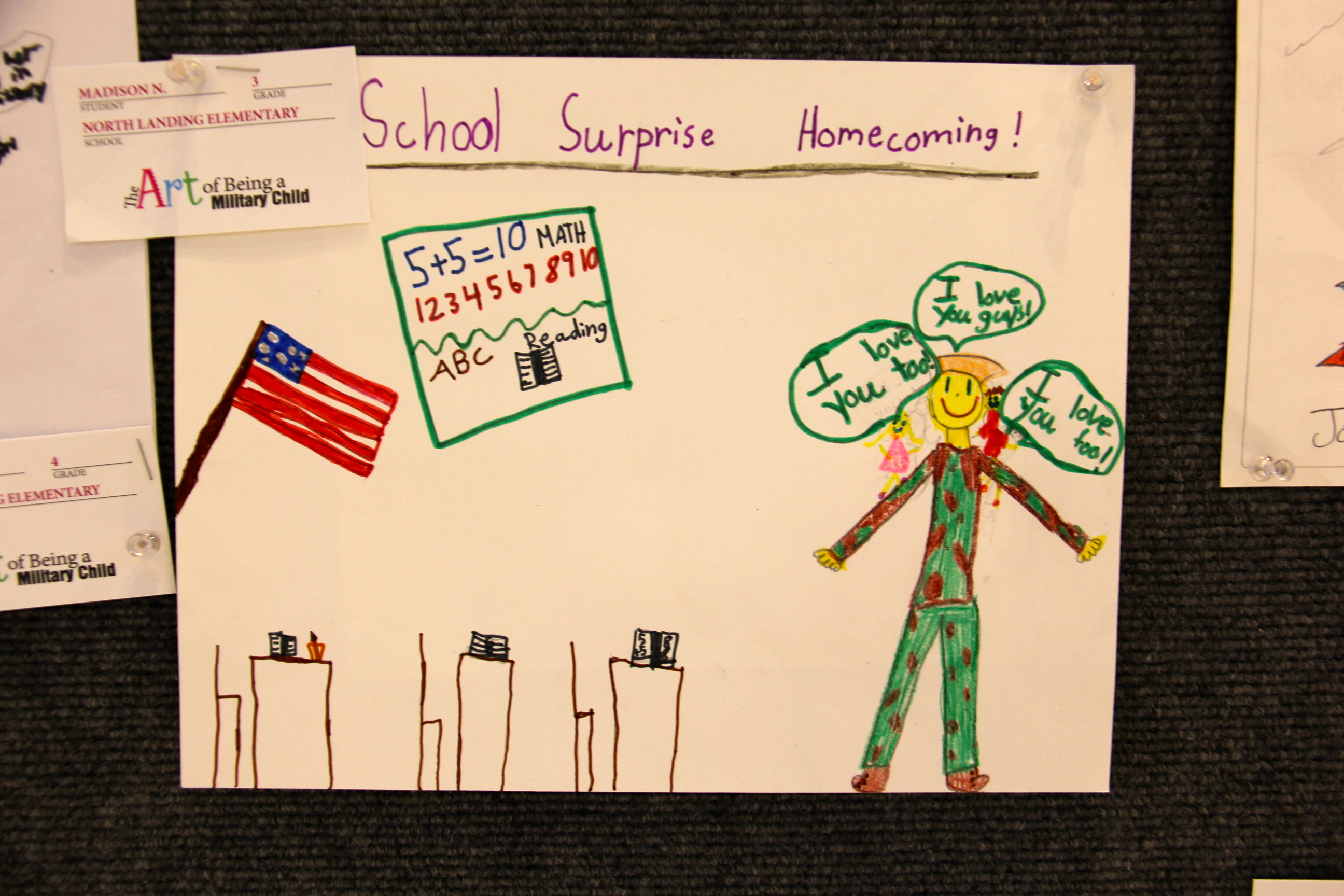 The two illustrations are among more than 700 pieces of student artwork in The Art of Being a Military Child exhibit at Lynnhaven Mall this month. It is the fifth year Virginia Beach City Public Schools (VBCPS) has hosted the exhibit during the Month of the Military Child. It is the culmination of an annual art contest open to all VBCPS students that the divison hosts in partnership with military school liaison officers at Joint Expeditionary Base Little Creek-Fort Story and Naval Air Station Oceana-Dam Neck.

Student contest winners were recognized during the exhibit’s opening reception April 5 at Lynnhaven Mall which featured various guest speakers as well as entertainment by the U.S. Fleet Forces Band. 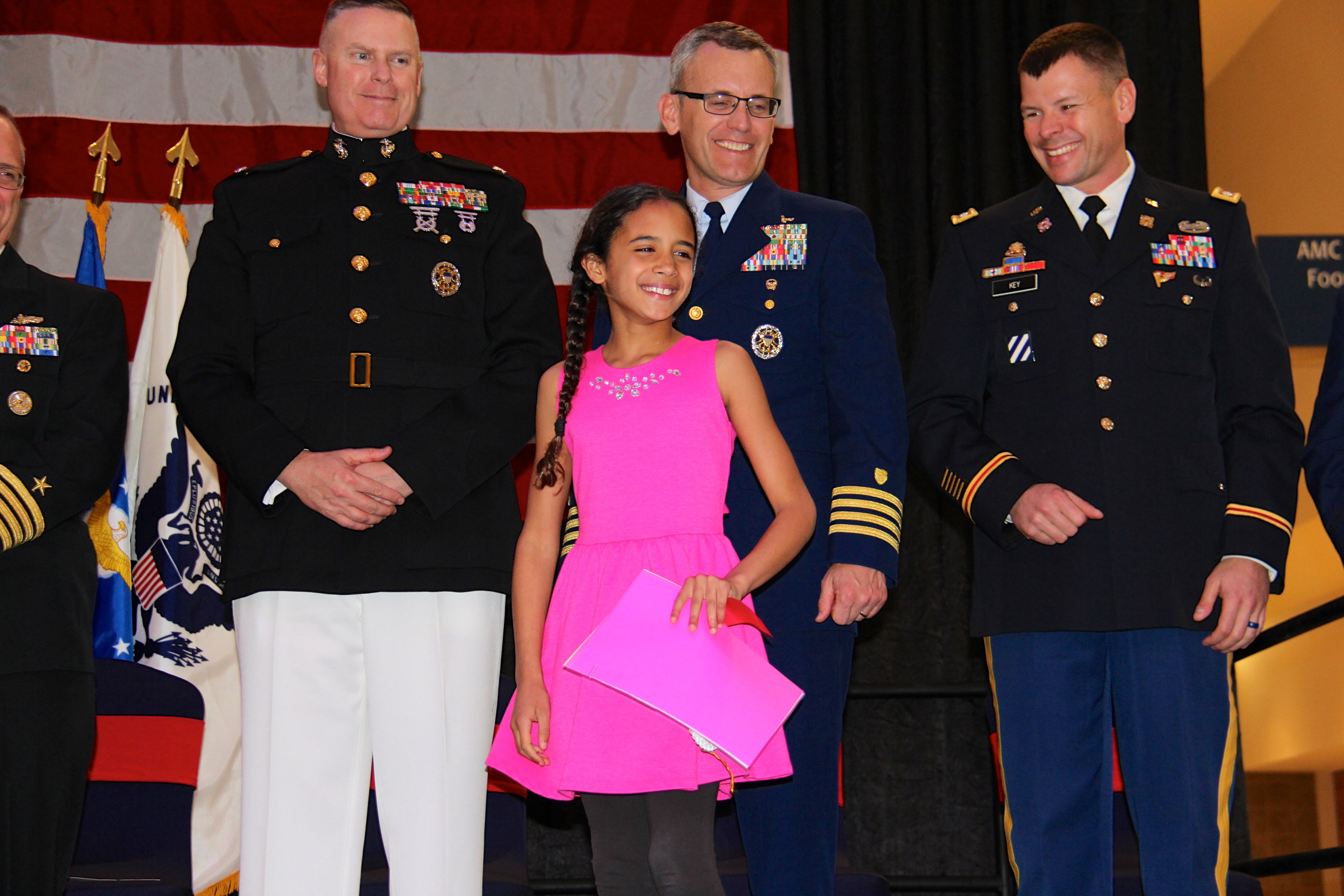 “This year the exhibit features art from various elementary schools, all of our middle schools and two high schools. This is our largest contribution that we’ve had,” said Natalie Meiggs, VBCPS coordinator of military connected and academic support programs.

“One of the biggest themes we’ve seen is the reintegration, the coming home, and the children’s excitement of a parent coming home,” observed Meiggs. “And it’s not just with our military dependent children but also with our civilian children. All of the children throughout the district, we’re starting to see that they are impacted by that reintegration.”

Amanda Yoder, one of the division’s two military-connected school counselors, agreed that all students experience feelings related to the military experience. They see their classmates experience deployments and celebrate homecomings, and they are impacted by military moves and relocations of their friends.

“I think what’s really powerful in this exhibit is that it’s sharing the way military children experience their parents’ deployment but also is open to all of our VBCPS students, so sometimes it’s someone who has watched their friend go through these emotions,” said Yoder. “Sometimes the overlooked or left behind students are the ones who are not military-connected but they are still they are still impacted by the military in a division as big as ours.”

The multiple military-related relocations for one of Haylee’s friends is what inspired the Landstown High School student’s piece. 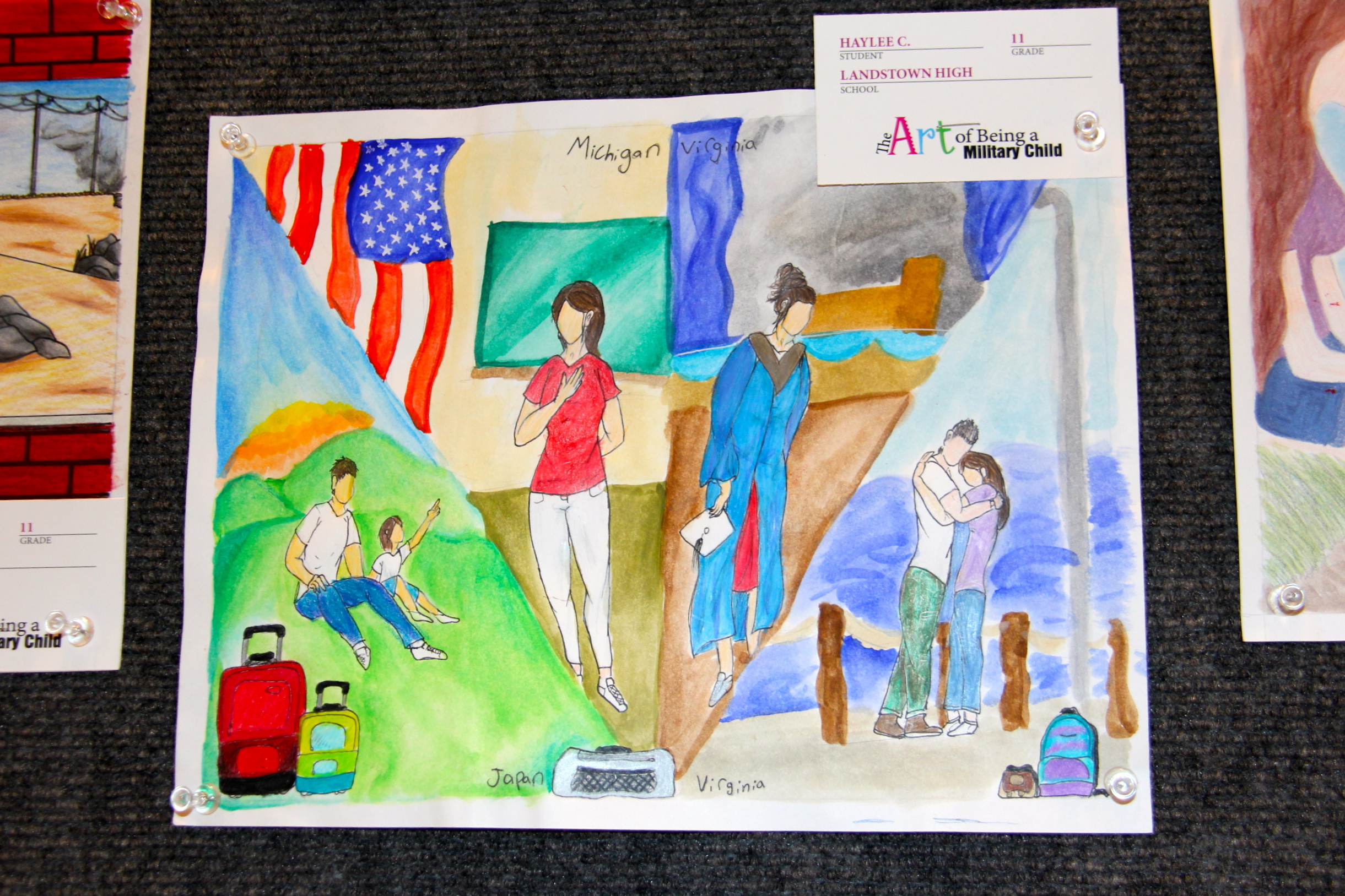 “[S]he tells me about her stories of moving from Japan to Hawaii to Virginia,” wrote Haylee. “Of course I can only imagine how it was to move so much, especially without a parent around all the time. I put all those emotions she relayed to me into my piece. It’s supposed to show understanding and support for all my military friends.”

Understanding and support as well as honor and sacrifice are themes art exhibit visitors will see.

An illustration by Grace, a Lynnhaven Middle School sixth-grader, pays tribute to her father. She hopes it will encourage people to remember those servicemembers who do not come home. 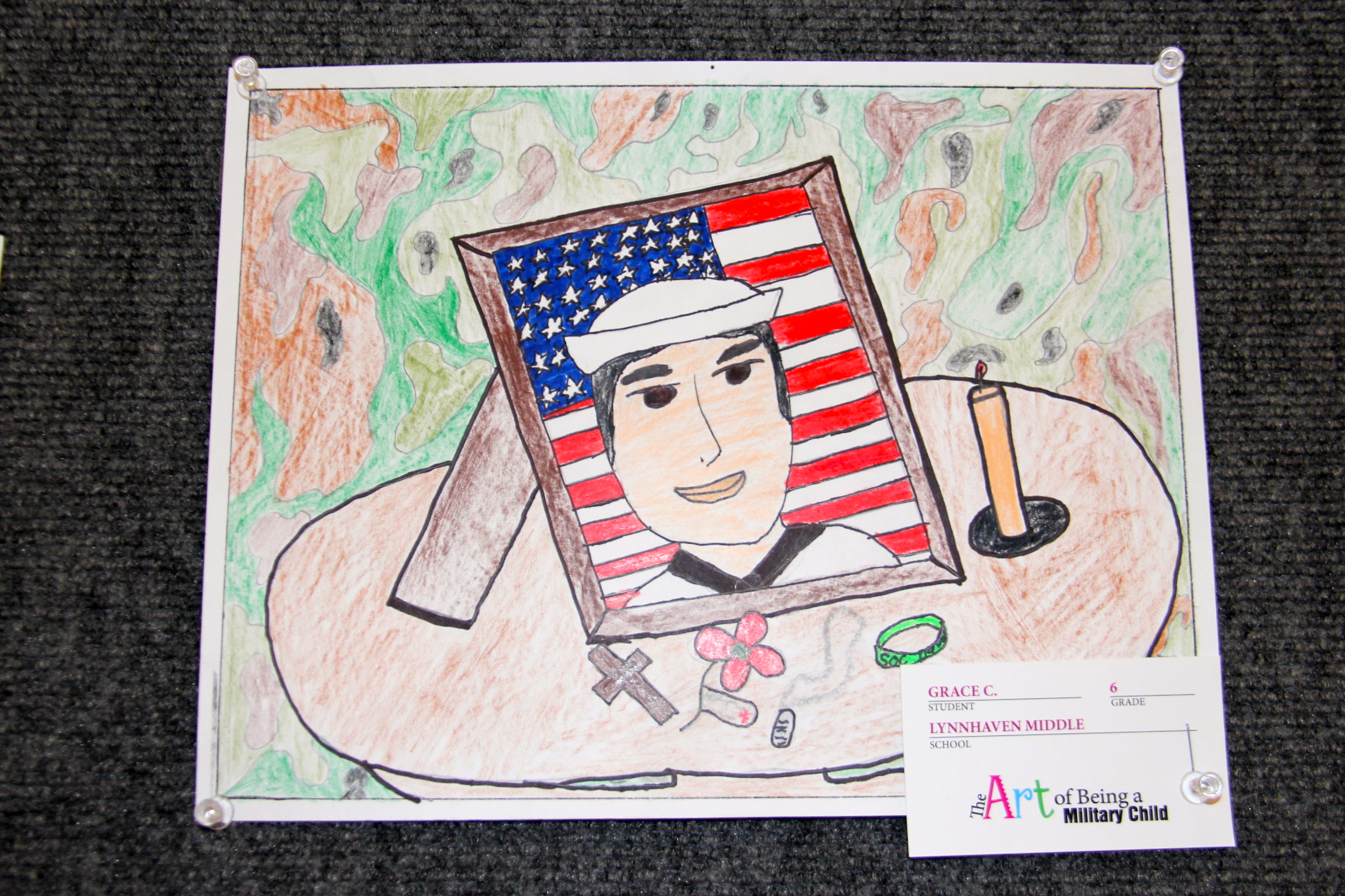 “I created this piece because I think it’s important to honor the men and women who died fighting for our country. This means a lot to me because I lost my dad in the military and he lost some friends, too,” she wrote in her artist’s statement. “My inspiration came from my aunt’s wedding. She had a table with pictures of people who have passed. A sign said, ‘We know you would have come and stayed if heaven weren’t so far away.’ As you can see, my image means a lot to me. I hope it will make some remember.”

The public is invited to view The Art of the Military Child exhibit located near center court of Lynnhaven Mall through the end of April. More photos from the exhibit and the opening reception are posted on the VBSchools Facebook page.

Congratulations to the following 16 student award winners in The Art of the Military Child contest: 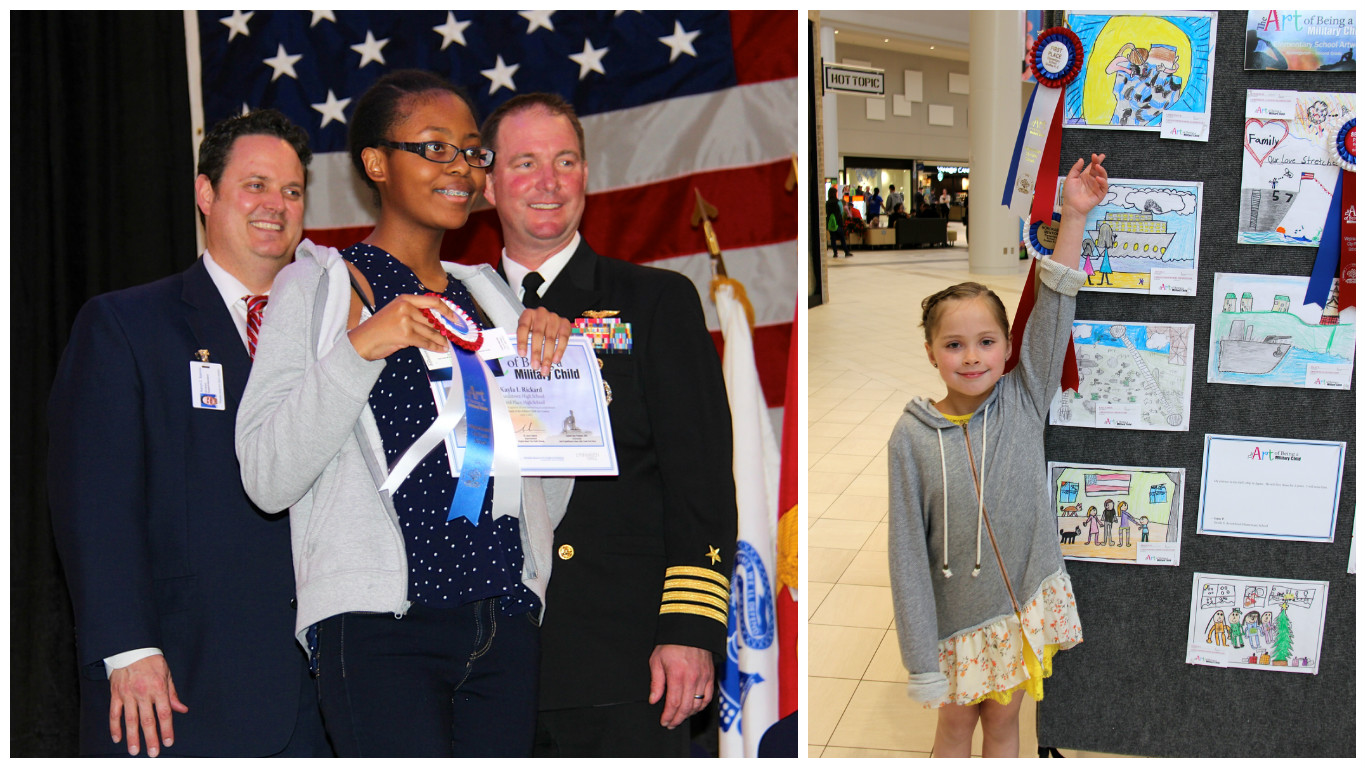