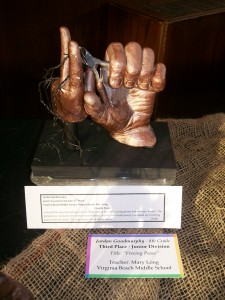 Virginia Beach Middle School eighth grader, Jordan Goodmurphy, recently won third place in the Junior Visual Arts Division of the Elie Wiesel Art Competition. The competition is sponsored by The Holocaust Commission of the United Jewish Federation of Tidewater and is underwritten by the Simon Family Foundation and Towne Bank.

Goodmurphy was awarded $75 for his entry entitled, “Freeing Peace”.

“I created this piece by making a cast of my hand, and my sister’s using plaster and making it bronze,” Goodmurphy said. “The barbed wire represents the silence toward hatred and the little hand (peace) is wrapped up restricting peace from the world. The large hand is breaking the silence.”

Elie Wiesel is a Romanian-born Jewish writer, Nobel Laureate, and Holocaust survivor. He has written 57 books, including Night, a work based on his experiences as a prisoner in the Auschwitz and Buchenwald concentration camps. Every year, the Holocaust Commission invites middle and high school students to participate in writing and visual arts competitions named in Wiesel’s honor. The competitions guide students in their exploration of moral courage, the dangers of prejudice, peer pressure, unthinking obedience to authority and indifference.